River of Grass Finds a Road in Reluctance

Kelly Reichardt once described her 1994 directorial debut River of Grass as a movie without. A “road movie without the road, a love story without the love, and a crime story without the crime.” Like an equation. A recipe halved. Not lacking, per se, but lying just outside of or beyond genre. It’s as though River of Grass (newly restored and screening today, tomorrow and the day after at TIFF) is genre-bereft. Indefinable, insomuch as it plays out familiarities — Godard’s “a girl and a gun” theory, shades of Breathless and Malick’s Badlands and Barbara Loden’s Wanda — but only vaguely. Part satirical. Part whathappenswhen a movie is made about a woman who wants her piece, but doesn’t know which piece or how much — maybe she just wants a clean break — and so, naturally, she becomes a fugitive. She narrates her life and everyone watching whispers: Sissy Spacek.

Still, it’s as if River of Grass is hesitantly under the influence of its influences. The sort of story that begins with two people meeting at a bar and someone says, “You’re not from here,” and sure enough, hijinks ensue. Well, sort of. The hijinks meander, albeit quickly. River of Grass is a mere 76 minutes long.

While it is a first feature, certainly, foretelling themes in Reichardt’s future works (Wendy and Lucy, Meek’s Cutoff, to name a couple), and as a result, is laden with all manner of first feature tics, River of Grass is curiously, an active rejection of momentum. More so than a traditional story about two down-and-out types looking for a way out, River of Grass is — how do I put this? — a reluctance. A series of false starts set against Florida’s everglades.

Perhaps, then, it’s useful to consider what this movie is. How it seems nearly uninvolved with itself, yet remains very involving. It’s a movie about a woman named Cozy (Lisa Bowman) who is so disinclined to live her own life — her marriage, her two kids, her terribly absent-minded police detective dad —that she spends the day practicing cartwheels in her living room, only to end up in a bizzarro Bonnie and Clyde situation with Lee Ray (Larry Fessenden); a grown man with not much going on, still living with his mother and grandmother. He has his records. A golf club he swings at nothing in particular. His man-boy things. His bare bum in bed. His blues. He’s exactly the kind of deadbeat Cozy can believe in. He kills a palmetto bug for her. He steals his mother’s sandals for her. He looks for loose change in phone booths and swipes strangers’ clothes from the laundromat, and pays for their motel room; the motel room where they don’t have sex but instead drink beers, and where Cozy gets existential about life and what it means. She’s preoccupied by the nameless, faceless, possibility of strangers. Her construction of the world is fixed on wondering if there’s anyone just like her, in this moment, doing exactly what she’s doing. It’s as if she wants her own mirrored reflection to tell her what to do.

Lee’s plan is that he doesn’t have a plan. And even that, Lee can barely pull off. Still, for Cozy, not having a plan is better than all the cartwheels in the world. For Cozy, limbo “sounds nice.”

What else? River of Grass is about a non-crime. One that was never committed, though the fiction of it becomes Cozy’s greatest reality. She can be the star of something, it doesn’t matter what, so long as she maintains the delusion. Whatever the cost. Thinking she’s killed a man is her desert mirage. She’s an anti-hero going nowhere who hasn’t broken the law. You can get away with having done nothing but seem like you’re getting away with having done something, if suddenly you feel free.

The make-believe is what compels Cozy to finally — literally and figuratively — take the wheel. Because up until then, hers was an origin story, only. She was born in 1962 at Coral Gables Hospital on the University of Miami’s campus. She grew up religious, her voiceover tells us at the start. She lives in a house where a wife murdered her husband, we learn. We see pictures of young Cozy with overplucked eyebrows lounging on a couch. Those pictures seem more ominous than the story about the killer wife.

Cozy’s near-plaintive and daydreamy voice gives the impression she is reciting her life, not from memory, but from a book of something sweet that ends with the moral of the story. There are moments too when River of Grass unfolds like a lyrical essay about coming-of-age — a first-person piece built around a town’s geography. How a half-urban landscape functions as a metaphor for being stuck. The once uninhabitable now dotted, as Cozy says, with shopping centres “every two miles.” Cozy observes new construction more than she observes anything really, especially herself. Reichardt’s entire oeuvre has always been, in its way, about nature and how we’ve paved over it, and how in doing so, we’re paving over ourselves.

What’s more? What else does River of Grass say without saying much at all? As Cozy remarks, it’s about not being on the lam after all — ”If we weren’t killers, we weren’t anything.” But like Barbara Loden's Wanda, Cozy was born on the lam with an itch to escape. Living was simply lying in wait. While life is nothing like the movies, of course, Cozy can absolutely try and live hers, from now on, as though she was inspiring one. And anyway, the highways, the overpasses, the roads, unlike her husband and two babies, she remarks, are at least headed somewhere. The road, unlike her life at home, won’t be a reminder of how desperate she feels. The road is good company. It continues. It forces you to experience change. 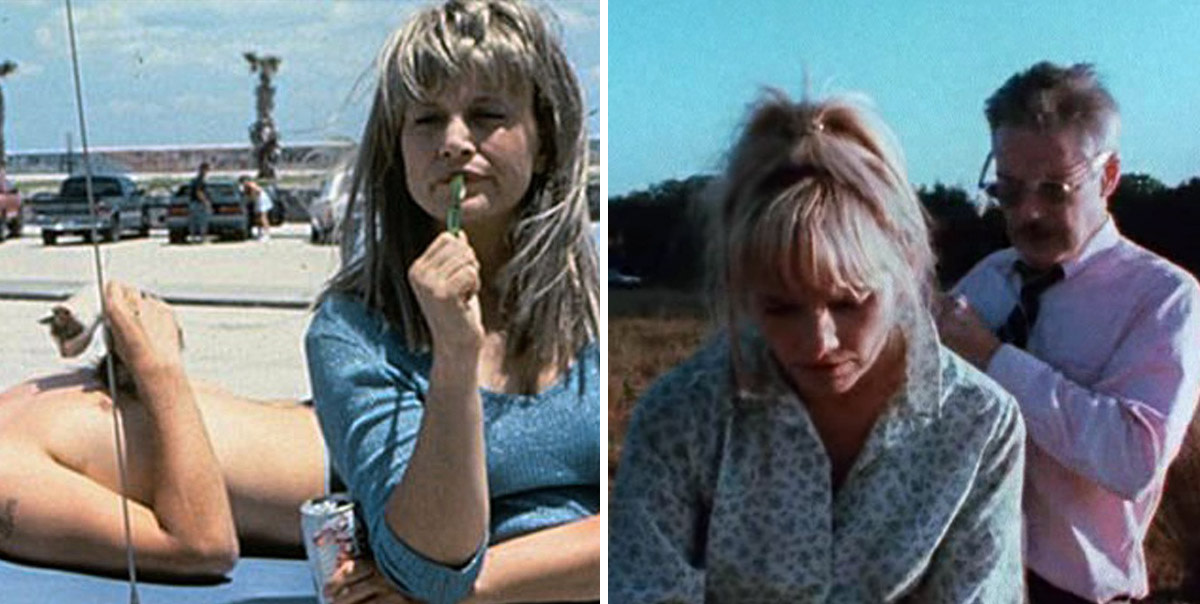 One of the film’s most popular images, featured on a few of its posters, is that of Cozy leaning against Lee’s blue Chevrolet. It isn’t a particularly striking image. Just her wearing a wig Lee stole, holding her green toothbrush, looking off in the distance. There’s a shot in Loden's Wanda nearly identical to it. Both women leaning on cars and now, long-missing. In both instances, there’s the same quota of blue: both women’s dusty clothes, the car, the sky. And even something extra. An overall blueness. The faded kind, like when magazines are left in store windows too long and all the cover girls look as if they’re freezing or seasick, or stuck in time.

Despite the gun slinging — so many shots fired! — there’s very little drama in River of Grass. And that’s fine; it never promised much more than that. It ends with Cozy, of all things, stuck in traffic. Alone again. But maybe alone for real, for the very first time.

As she inches Lee’s Chevrolet down the expressway — where exactly? Who knows — all we can see is the back of his car. The six numbers of his Florida license plate. But look close and you’ll notice something else. The state’s shape outlined on the plate. Florida’s map is bent like, of all things, a gun. There it is. The gun and the girl in the road movie without the road, the love story without the love, and a crime story without the crime.