From Devo and the Pixies to Bauhaus and Modest Mouse, we trace the 40-year odyssey of the immortally creepy music number from David Lynch's Eraserhead 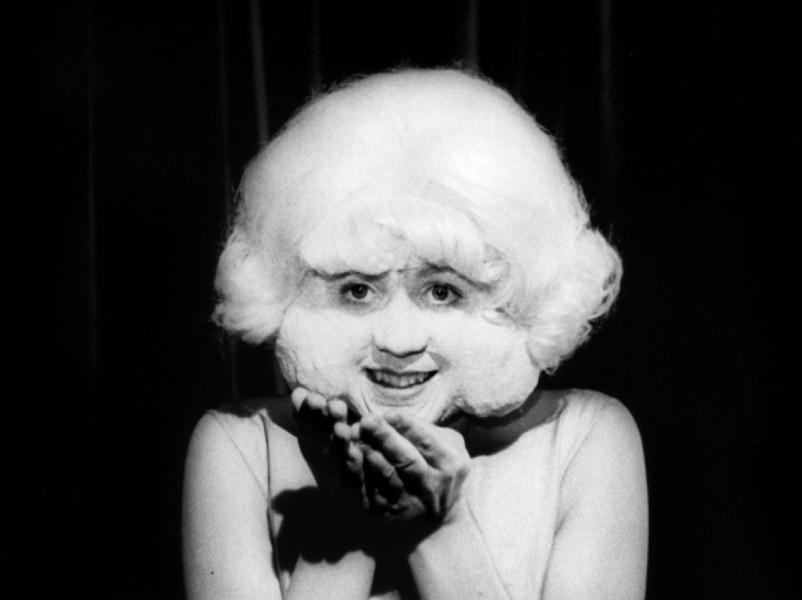 In this ongoing series, Chris Cummings — a.k.a. Toronto chamber-pop sensation Marker Starling — unearths some of the film songs, scores, and musical moments that have helped shape his love of cinema, and explores their afterlives beyond the film frame.

As performed by the mysterious, mump-cheeked Lady in the Radiator, the song “In Heaven” is one of the creepiest things in David Lynch’s majestically creepy Eraserhead.

Arriving in March 1977 just as punk was turning the music world on its head, David Lynch’s black-and-white feature debut — whose every frame resembles a faded ’80s British post-punk album cover — seems in retrospect to have been perfectly timed. Set in an industrial hellscape which Lynch authority Dennis Lim described as “a Philadelphia of the mind,” Eraserhead shared punk’s fondness for things old and discarded.

But prior to 1977 lay five long years of production, which began in the decidedly non-punk year of 1972. And 1977 is really only a rough guidepost as far as the film’s release date is concerned: the film was first shown publicly in late 1976, which garnered it a famously negative review in Variety but precious little audience. It wasn’t until after a few years, when it became a staple on the midnight-movie circuit, that it attained its cult reputation and following.

It was several years after the start of production that Lynch hit on the idea of the Lady in the Radiator and the musical number “In Heaven,” whose minimal lyrics he wrote himself. Lynch had heard Peter Ivers’ 1974 album Terminal Love (Ivers was also a regular presence around the American Film Institute campus, where Eraserhead’s long gestation took place), and decided that Ivers was just the person he needed to collaborate with. Although Lynch cast 19-year-old singer Laurel Near as the Lady, the voice that sings on the soundtrack is actually Ivers’, pushing the scene a little closer to the uncanny valley.

The Harvard-educated Ivers (who also collaborated with Asha Puthli, was friends with Harold Ramis and John Belushi, and was also called “the best blues harmonica player in the world” by Muddy Waters) is seen here at a party in the early ’80s, where he names “In Heaven” as “my most famous song” and even offers an impromptu rendition.

Ivers went on to host the cable-TV show New Wave Theatre, which showcased punk acts and comedians in a suitably manic setting. Ivers began the show with a poetic, stream-of-consciousness pronouncement.

The television show, and several other soundtrack and songwriting ventures (including scoring Ron Howard’s directorial debut Grand Theft Auto), seemed about to propel Ivers to wider success, when his life was suddenly and violently cut short: he was found bludgeoned to death in his apartment in L.A.’s Little Tokyo in early 1983, a murder that remains unsolved to this day.

Prior to Ivers’ sad end, however, his “most famous song” was already starting to be covered by contemporary bands, with Devo being one of the first. (The meeting between Devo, Lynch, and Ivers is documented in a fascinating 2008 article in the L.A. Weekly).

As Eraserhead’s reputation grew through the 1980s, “In Heaven” covers multiplied accordingly, with the Pixies providing perhaps the definitive rock rendition of the track on their first demo cassette, known as “The Purple Tape,” in 1987; the song went on to become a staple of the group’s live sets. Starting in a quiet, vocal-and-bass-only setting, the Pixie-fied “Heaven” bursts into a fiery flower of rage:

Bauhaus released a softly menacing live take in 1992, while Modest Mouse incorporated “In Heaven”’s refrain into the studio track “Workin’ on Leavin’ the Livin’” in 1999.

In 2015, Laurel Near reprised her role for this live performance of “In Heaven” with the Divine Hand Ensemble, in which you can hear her real singing voice.

That the song lived on so long past the punk and post-punk heyday of 1977 to 1983 is partly due to its inclusion on the Eraserhead soundtrack album, released on I.R.S. Records in 1982. The album consists of two album side-length pieces which take the listener through the intricately crepuscular sonic worlds of the film, which Lynch and his long-time sound designer Alan Splet edited down into a collage from their years-long work on the film’s soundtrack. The result is a unique sonic artifact, made up of soundscapes with a few bits of dialogue here and there rather than strictly musical selections (the only other music on the soundtrack besides “In Heaven” are a pair of ghostly Fats Waller organ tracks, deftly incorporated into the longer pieces).

For those interested in reading and hearing more, the Criterion Collection website has an excellent long-read interview with Lynch about the production of Eraserhead. The Criterion DVD of the film also contains a feature-length documentary, David Lynch: Eraserhead Stories, consisting of a long interview with Lynch that covers much of the same ground as the interview linked above, but that is sometimes overlaid with fascinatingly murky black-and-white video footage of the production (including the construction of the outdoor set, a hidden concrete patio on the AFI’s campus where the Lady in the Radiator scenes were shot; the patterns on the floor were hand-stencilled by Lynch himself). It also includes a conversation between Lynch and his long-time friend Catherine Coulson — better known as the Log Lady from Twin Peaks, and the wife of Eraserhead star Jack Nance — who was one of the extremely talented collaborators whom Lynch brought together for the marathon Eraserhead shoot.

Deep Cuts: "Wild is the Wind"