On Saturday, September 7, Share Her Journey supporters came together with female filmmakers for an insightful, inspiring panel discussion. At the event, two women from two different places began a conversation: Jen McNeely, founder of Shedoesthecity, and Antoneta Kastrati, a filmmaker premiering her film ZANA at TIFF 2019. This is what Jen had to say on Shedoesthecity’s Instagram profile after the event: 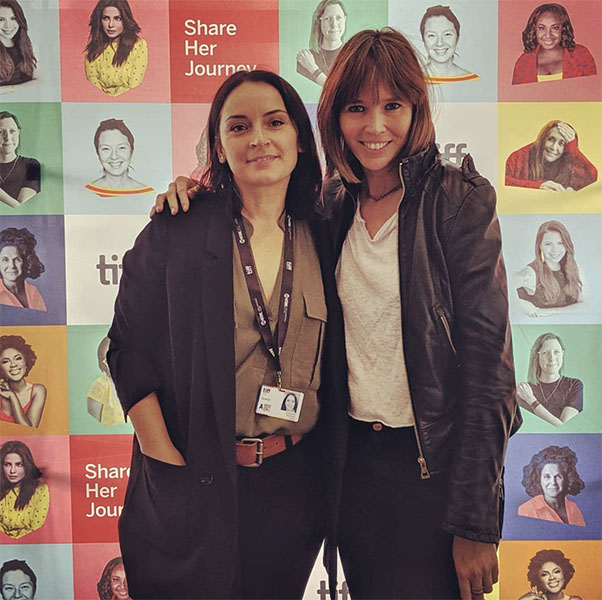 The TIFF magic lies in the unexpected.

I was the first to arrive at the #ShareHerJourney panel this morning, closely followed by filmmaker Antoneta Kastrati. Thirty minutes early (keeners!), and with no one else around, we introduced ourselves and decided to go grab a coffee. I asked her a bunch of questions and found out that the world premiere of her first feature film, ZANA, is this evening, and is part of the #TIFF19 Discovery programme. BIG DEAL.

ZANA is a film that has been inside of her and growing for 20 years, or when her mother and sister were both brutally killed in the Kosovo war. Antoneta was 18 at the time, and didn’t get killed that day because she had decided to go hide in a nearby forest.

ZANA is a fictional film, but it is drawn from Antoneta’s lived experience, and deals with themes of grief, motherhood, war, and PTSD — the latter being something she lives with, always. In the 30 minutes that we shared, I listened to her life story. I discovered that her husband is the producer of ZANA, and that she met him in 1999, in Kosovo, when he arrived from California as a war relief volunteer. They began making documentary shorts together, and eventually moved to LA to attend the American Film Institute.

Antoneta and I are both mothers, the same age, and beyond talking about her life story and her film, we talked about our kids going back to school, and I shared with her photos of my son.

After the panel, I went downstairs and bought a same-day ticket for her film. She’s part of the first generation of female filmmakers from Kosovo, and her sister is the only woman cinematographer in Kosovo. (And the one who shot her film!)

THIS IS WHY TIFF IS AMAZING. I will never forget today, and tonight I get to watch the film that Antoneta has been thinking about since 1998. And I get to share this entire experience with you.

If you’re in line, turn to your neighbour, ask them something. Their story might inspire you in a way you never knew was possible.