Earlier this fall, Joanne Sarazen made her feature-length screenplay debut with Tammy’s Always Dying at TIFF ’19. She also joined us as the second recipient of the Micki Moore Residency, made possible by broadcaster, journalist, and actor Micki Moore in tandem with Share Her Journey. While in residence at TIFF Bell Lightbox, Joanne will be developing her new script, Conception.

Below, Joanne shares with us details about her new work, her sources of inspiration, and her inimitable artistic journey. 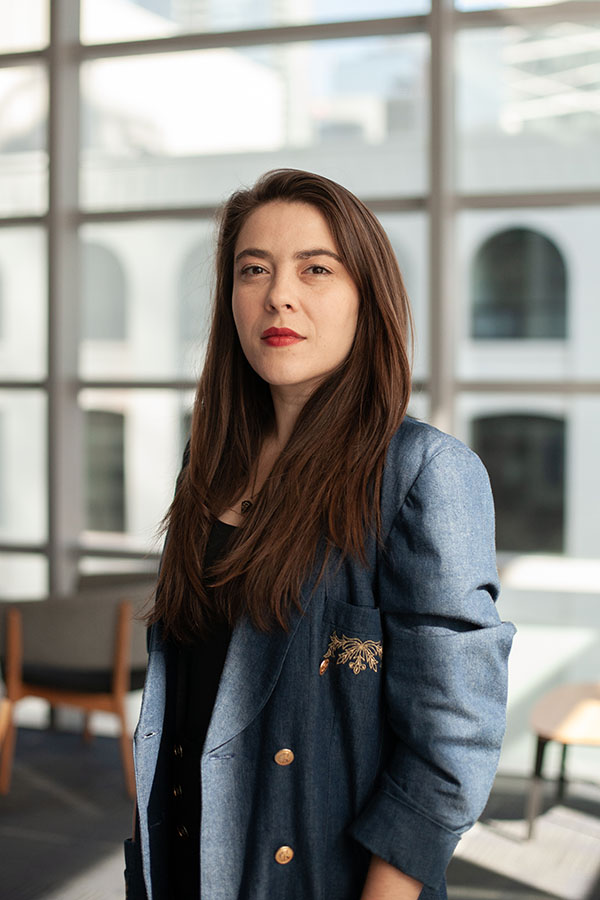 What does it mean to be selected as this year’s Micki Moore Writer-in-Residence? How will this impact the creation of your new script?

It is a tremendous honour to be this year’s Micki Moore Writer-in-Residence. It has given me the opportunity to work at TIFF Bell Lightbox, it has provided me with a script consultant who has been instrumental in strengthening my script, and it has allowed me to participate in panel discussions with other filmmakers. Writing can often be a solitary activity, but this residency has provided me with such incredible support. My script has benefited immensely from the expert guidance I’ve received.

Can you tell us a bit more about your new script?

My script is about a deeply religious family who participates in anti-abortion rallies, oftentimes performing song and dance numbers at fundraisers. But when the matriarch of the family discovers she’s pregnant (again), she enlists the help of her sister to procure an abortion.

The story explores isolation, motherhood, female autonomy, and how a series of innocuous events can cause a cataclysmic shift in your beliefs. Oh, and there are several song and dance numbers, as well.

What inspires you, and what are your greatest influences?

I pull a lot from my own experiences, but I’m also influenced by a variety of art forms. Music is hugely important in terms of influencing the patterns and rhythm of dialogue in a scene. Visual art inspires the landscape and the overall mood of the story. Literary works can inform how action sequences are written or how characters are introduced.

It’s been three years since the launch of the Share Her Journey campaign and movements like #MeToo and Time’s Up. What are the biggest changes you’ve seen, and how do you hope the conversation about diversity and gender parity in the industry continues to evolve?

Films that tell a variety of stories are far more accessible than they’ve ever been, and as a result, I have been challenged and inspired and encouraged to approach storytelling in a more empathetic way. Although the industry has made great strides, I feel as though we must keep up the momentum and find ways to make the industry more inclusive. I think it’s important that we continue to find ways to reach out to different communities who may not have the resources that we do in a metropolis.

Will you tell us a bit about your own journey?

I worked as a playwright and theatre artist in Montreal for many years. When I moved to Toronto, I subsidized my income by working in bars and restaurants, as many artists do. I did not attend film school, but I’ve had several mentors and peers who have helped me along my path as a screenwriter and to whom I owe a tremendous amount of gratitude.

I was lucky enough to attend the writer’s lab at the Canadian Film Centre with my first feature-film script, and now, through the Micki Moore Residency, I have the privilege of working on my second. I’m so fortunate that these institutions and opportunities exist.

We can’t go without asking this: what is your favourite film?

This question is impossible! I was raised on a lot of older films. I love Ida Lupino’s work. I love Robert Aldrich. I love Sidney Lumet’s version of Murder on the Orient Express. I love Andrea Arnold, Martin McDonagh, and Mike Leigh. But as a writer, a film script that I think is brilliant and underrated is Lona Williams’ Drop Dead Gorgeous.