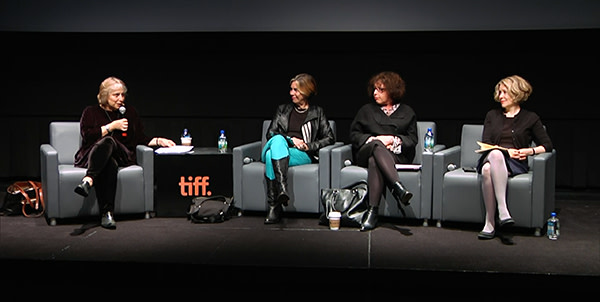 Scholars, media experts and festival programmers considered the legacy of the 1973 Toronto Women & Film International Film Festival, and the significance of women's film festivals in the transnational exhibition circuit.

As part of the TIFF Bell Lightbox programme Forty Years On: The Women & Film International Film Festival 1973, this Higher Learning event reflected on the groundbreaking festival's genesis, its impact on the study, distribution, and visibility of feminist cinema, its relevance to the role of women in the film industry, and its influence on contemporary women's film festivals as well as LGBT festivals. Other topics included: the ephemerality of festivals and the scarcity of research materials, the feminist art movement in the 1970s and its impact on the rise of women video artists, and issues of moving image preservation as they relate to the programming of women's film festivals.

Panelists included: Kay Armatage, Professor Emerita at the Cinema Studies Institute of the University of Toronto; Melinda Barlow, Associate Professor of Film Studies at the University of Colorado; and Noreen Golfman, founding Director and Chair of the St. John's International Women's Film Festival. The discussion was moderated by Rina Fraticelli, Executive Director of Women in View.

In partnership with the University of Toronto's Cinema Studies Institute, the St. John's International Women's Film Festival, and Women in View, this Higher Learning event was held on October 8, 2013 at TIFF Bell Lightbox.