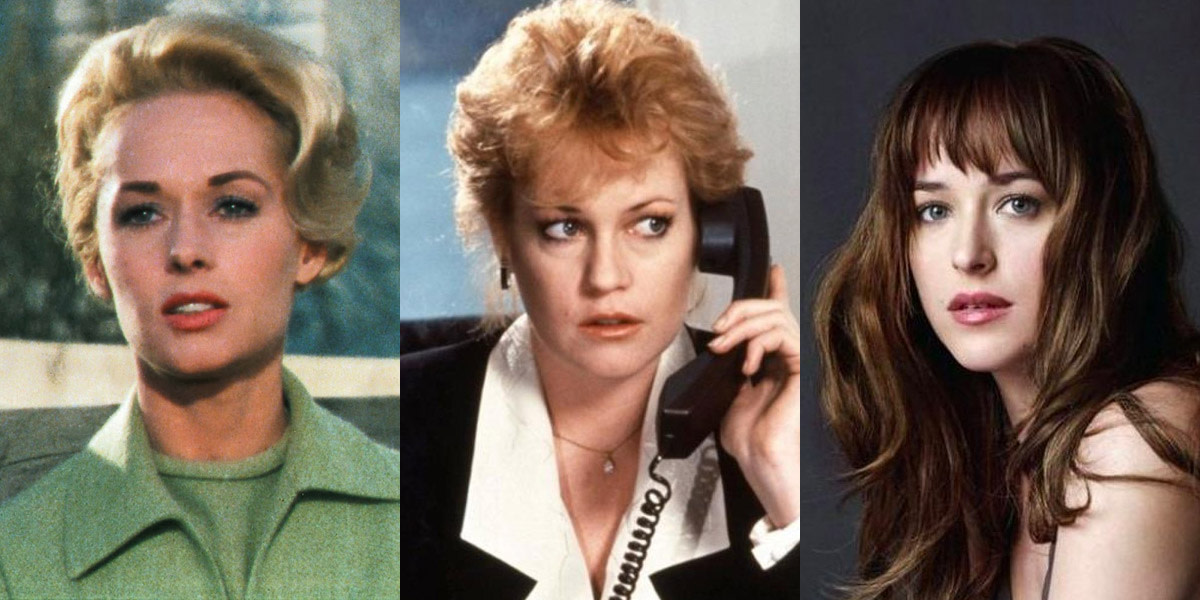 Though they bear only passing resemblance to one another and don’t even share surnames, Tippi Hedren, Melanie Griffith and Dakota Johnson – mother, daughter, granddaughter – exist as asterisks on each other’s filmographies. When Griffith’s star began rising 30-some years ago, critics couldn’t stop noting that Griffith was Hedren’s daughter. Likewise, just last year with the release of Sam Taylor-Johnson’s Fifty Shades of Grey (2014), critics made a federal case out of the fact that Johnson was Griffith’s daughter, as if seeking to justify her talent.

Comparisons between the three, and their respective approaches to the wildly difficult craft of acting, have always seemed like reaches to me. Hollywood’s home to many mother-daughter pairings – think of Ingrid Bergman and Isabella Rossellini, Judy Garland and Liza Minnelli, Janet Leigh (another Hitchcock mainstay) and Jamie Lee Curtis, Vanessa Redgrave and Natasha Richardson, Diane Ladd and Laura Dern. There’s often great fun in looking for echoes of faded stars in their daughters, but such comparisons risk pigeonholing these actresses, too. These women are so often coupled with their mothers that their individual idiosyncrasies blur, and they’re denied a fair chance to be artists of their own. Kate Hudson never exactly delivered on the promise she displayed in Cameron Crowe’s Almost Famous (2000), a film in which critics delighted that she had the same daft, spritely appeal of Goldie Hawn circa Laugh-In. Nor could Gwyneth Paltrow ever quite replicate her mother Blythe Danner’s emotional nudity, even if critics drew false parallels early in Paltrow’s career.

Hedren, in her time, never really got her due as an actress, hampered by the notion that she was just a pretty face. This lack of critical rigor has extended to both Griffith and Johnson, too, actresses who’ve been gently dismissed as former Miss Golden Globes of limited talent. However, I’d offer three principal roles: Hedren’s in Alfred Hitchcock’s Marnie (1964), Griffith’s in Brian De Palma’s Body Double (1984) and Johnson’s in Taylor-Johnson’s aforementioned Fifty Shades of Grey (2015). Each actress portrays the same type in these films. Their directors have tasked them with embodying various states of psychosexual distress, yet they showcase markedly divergent philosophies of acting. 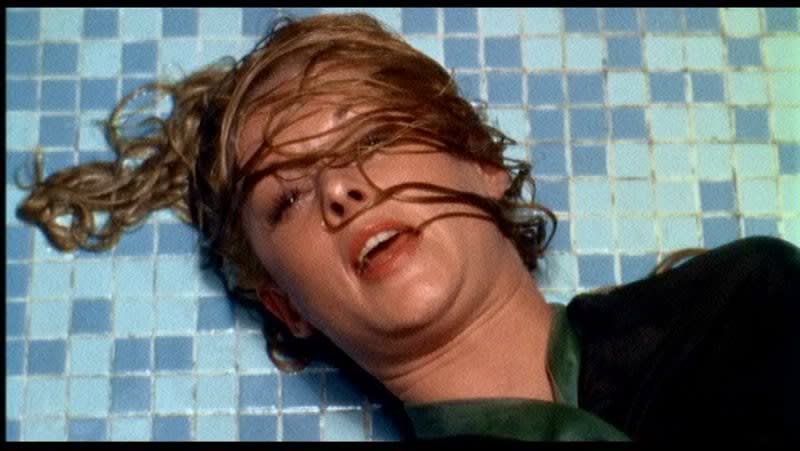 Though Tippi Hedren rose to fame with her role in Hitchcock’s The Birds (1963) (playing August 20 at TIFF Bell Lightbox), her anxious, controlled performance in Marnie (1964) (playing September 3rd) may be the most complete summation of her talents. In Marnie, she plays the final of the archetypal Hitchcock blondes – a tart, self-possessed kleptomaniac. She’s allergic to male touch, and with reason; men have been terrible to Marnie, and she has spent the years since childhood cultivating a pathological habit for deceiving them. She is caged by the people around her, inclined to see any question as a mild form of torture. (Notice how Marnie freezes with self-pity when her mother, played by Louise Latham, asks her why she dyed her hair blonde.) In defense, she’s chameleonic, donning disguises and stealing from others, all while wandering through the world with the soul of a wounded child.

In this film, Hitchcock trades off distance – his camera doesn't burrow into Marnie so much as it catalogs her torment from afar. Hedren is stymied by the shallowness of Hitchcock's camera, in its face, she retracts. She withdraws and cocoons herself, centering tension in her jaw. Consider the scene in which Marnie’s villainous husband-to-be, Mark Rutland (Sean Connery), presses Marnie about her real name. Hedren’s lips war with the rest of her face until they form into a knot; her mouth is the site of the character’s inherent anguish. In another scene with Connery, Marnie tenses up at the sight and sound of lightning. It’s one of Marnie’s many triggers – the color red is another – and she lumbers towards the door in Pavlovian response, flinching in horror. Even when he shoots her in medium close-up, Hitchcock seems not only to be tormenting Hedren, but also to be deriving pleasure.

It’s a fraught, uncomfortable scene, a sharp reminder that it’s impossible to discuss Marnie without addressing what was going on backstage. Hitchcock imagined Grace Kelly in the role, and Hedren was his second choice after Kelly demurred. Add to this the fact that, around the time of filming, Hitchcock made advances towards Hedren which she fiercely rejected. Time has revealed Hitchcock as a fragile man of the highest order, and Hedren was the target of his unreciprocated lust. His response to her rebuff, as catalogued in 2012's The Girl, was to exact revenge on her, subjecting her to torturous ordeals on set before effectively freezing her acting career. Their relationship grew bitterly adversarial near production’s end, with Hitchcock refusing to call Hedren by her name. He also barred her from working with other directors through the late ‘60s.

Today, when watching Marnie, it’s unclear where the character ends and Hedren herself begins. To put it in didactic terms, Hedren’s role here is a performance-within-a-performance. Both actress and character are forced to sustain a charade of personhood under emotional duress. In its time, Marnie was pilloried as an unequivocal disaster for Hitchcock, and it’s taken nearly 50 years for its stock to rise. Critics had little patience for its Freudian posturing, and this disdain reflected in the way critics saw Hedren's performance, too. Only now has the critical tide shifted. Film scholar David Thomson commented that Marnie is as much “an actress’s triumph as well as a director’s,” a strain of thought that didn’t prevail at the time of the film’s release when other people, especially actresses, were rarely given authorship of the movies they starred in. The New Yorker’s Richard Brody recently dubbed Hedren’s acting in Marnie as one of the best in the medium’s history. 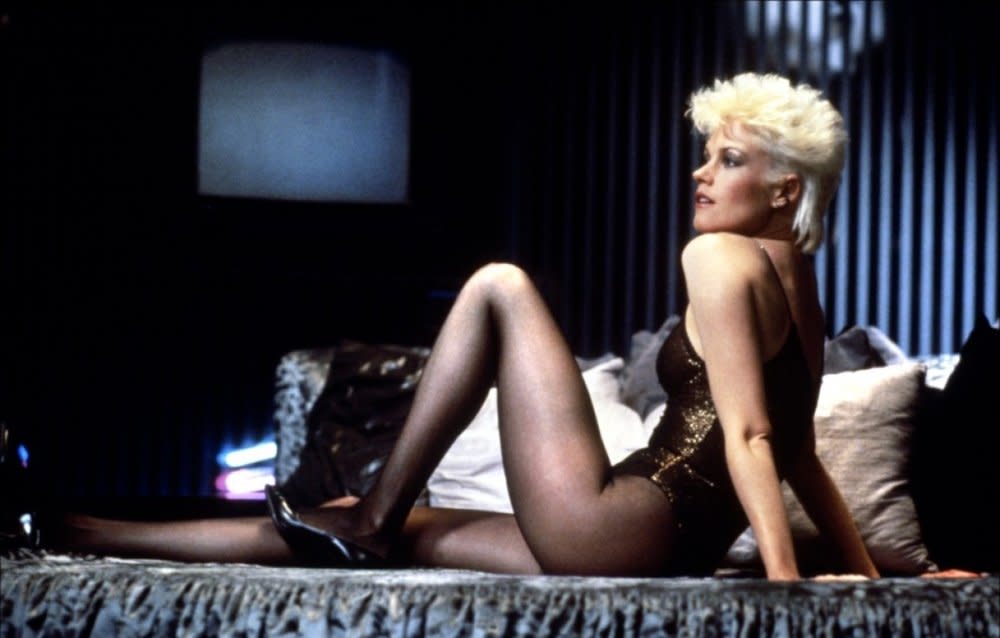 Brian De Palma’s career has wavered between tribute and parody to Hitchcock, a paradox contained in Body Double, in which he fashions Melanie Griffith’s character, pornstar Holly Body, in the vein of a Hitchcock blonde. In Body Double, Griffith is the most wised-up woman in the room. She doesn’t appear until midway through the film, and we see her on a television screen. “Holly does Hollywood,” she whispers, licking her lips and winking at the camera. The timbre of her voice is dewy and prepubescent. Though it lacks much in the way of cadence, she has a way of striking contradictory notes within this monotony, at once self-assured and hesitant. A few moments later, she dances along to inaudible music blaring from her headphones with willowy, slinky grace – a vision of feminine perfection for our hero, Scully (Craig Wasson).

Griffith was critically lauded for her performance, winning “Best Supporting Actress” from the notoriously snobby National Society of Film Critics and finishing as a strong runner-up in that year's New York Film Critics Awards. It also netted her a Golden Globe nod. She would follow this performance with Abel Ferrara’s Fear City (1984), in which she had a semi-iconic striptease scene and Jonathan Demme’s Something Wild (1986) (playing at TIFF 16 as a special Cinematheque screening), where she played the film’s raucous, open-hearted lead. These performances vouchsafed her as a cult actress.

Mike Nichols’ Working Girl (1988) was her inauguration into mainstream parlance and was semi-fatal for her career in the long term. Working Girl is a film that takes ‘80s capitalist greed and makes it aspirational. And in Griffith's hands, it’s utterly romantic. Her character charts a linear journey of success, but the actress imbues this performance with unexpected touches – look to this supercut of the instances of literal throat-clearing in her performance – that anchor Tess McGill in specificity. Griffith had a naturalistic way of establishing kinship with her audience, making her easy to cheerlead for. Parallel to Working Girl’s sleeper success was her well-documented public comeback narrative, wherein she had kicked self-destructive habits of drugs and alcohol, scrubbing herself clean. Coupled, these factors made her a favorite for the “Best Actress” Oscar that she’d ultimately lose to Jodie Foster for The Accused (1988). Yet, what followed Griffith’s domestication with Working Girl was a decade of continual miscasting as a watered-down leading actress, during which directors slotted her into blandly dramatic roles that betrayed her quirky, off-kilter screen presence. 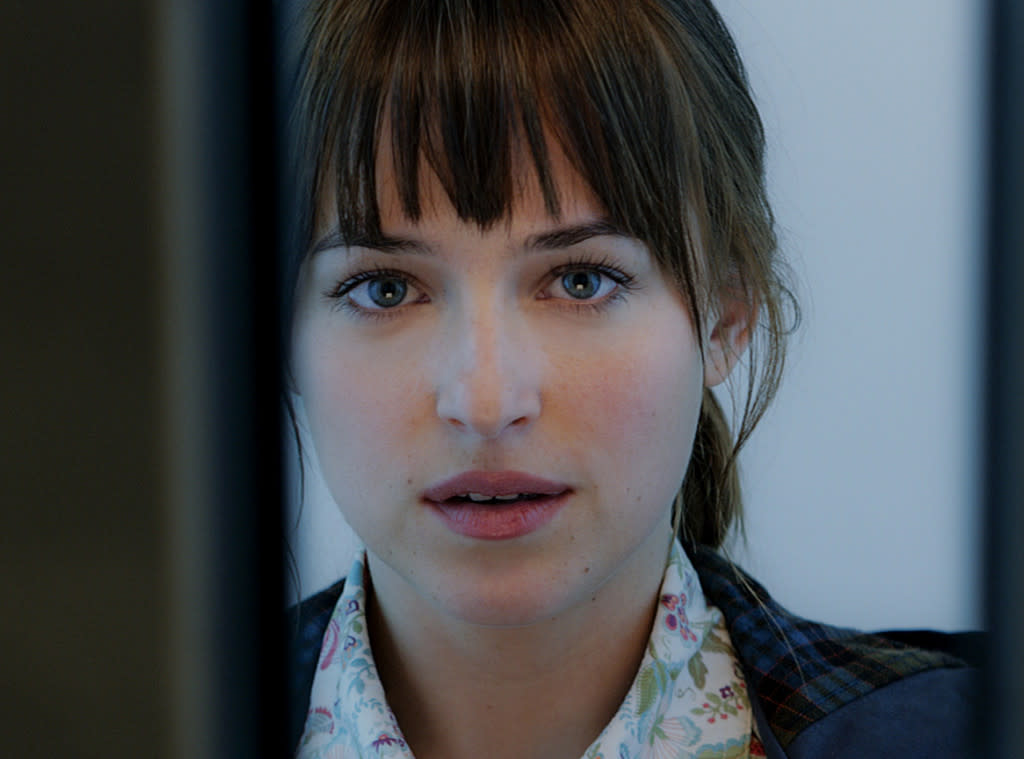 There are shades of Holly Body in Dakota Johnson’s Anastasia Steele 30 years later, the kind of role Griffith could’ve pulled off, had she been given the chance. Like Marnie and Holly Body, Anastasia’s something of an actress, too. She must play the de-facto role of journalist, filling in for her roommate who’s battling the flu. We first see her as she's preening in the mirror, readying herself to step into her roommate’s shoes.

As her mother does in Body Double, Johnson glides through the film with a faint smirk, but her task is more herculean. She gamely braves the minefield Taylor-Johnson creates for her. “I do have a GPS and a 4.0 GPA – I can figure it out," Anastasia tells her roommate on her way out, just a few minutes into the movie. It’s an unbearably stupid line, the kind the movie teems with. Johnson rattles it off in a way that exposes it on the page. It’s as if you can see her scanning the written words through her head before she spits them out. Even if you’re aware of the mental calculus involved, Johnson makes this look effortless. She seems to be in on the joke, aware of the script’s fundamental idiocies, and the film becomes a showcase for her agility.

Her co-star Jamie Dornan is a plank-like sparring partner for Johnson – his eyes are sullen, his delivery astoundingly colourless. I don’t think that’s on more obvious display than in the film’s early meeting between the two principal characters, in which Anastasia reads questions off her paper and fumbles her way through her roommate’s prepped questions. “Are you gay?” she asks, accidentally. Johnson’s eyes widen ever so slightly, swallowing the impulse to let out an impish giggle. Eventually, Grey clamours to know more about her.

"There's really not much to know about me,” she confesses in response, speaking with a slight lisp. Johnson’s face freezes in this moment, and she stages these few seconds as a confessional, in which Anastasia’s insecurities – and, perhaps, Johnson’s own – overwhelm the frame. Throughout the film, as in this scene, Johnson makes Anastasia into a character who’s breathlessly exposed, even in the most hideously trying of circumstances.

There was light furor over the fact that Johnson received a Razzie nomination for “Worst Actress.” It seemed like a particularly lazy, knee-jerk citation that forecasted my greatest fear about her: that she will coast through her career with a shared, industry-wide feeling that she owes her stardom to her family, based on the fallacy that she has no talent. Johnson’s career is still relatively nascent, and one can hope that she'll have more opportunities to stretch her acting muscles further than Fifty Shades allowed, superfluous Razzie nomination notwithstanding.

But the talent, of course, is there, as it was in her mother and grandmother before her. Johnson’s artistry lies in her spontaneity and lack of training. A screen presence this charismatic is a gift few people possess, even if it may be indebted to genetics. She marries this to an emotional transparency that, if directors know how to shape it, may establish her as one of the major actresses of her generation. Anastasia Steele is a role that could very well define Johnson, just as Marnie did for her grandmother and Holly Body did for her mother. But just like her ancestors, so long as it doesn't limit her.