“There is an Incentivized Path to Mediocrity”

On January 27, the arts section of The Globe and Mail ran an editorial piece by TIFF Artistic Director Cameron Bailey. Headlined “Dear Canadian filmmakers: it’s not about you, it’s about us”, the article urged local filmmakers to find personal stories within the political issues currently facing our not-so-polite country, including Canada’s missing and murdered Indigenous women, voter manipulation in the 2011 election, and human trafficking across Ontario Highway 401. Wrote Bailey, “Our fiction films, on the other hand, tend to the personal: coming of age, family tensions, falling in and out of love… As a result, the stereotypical Canadian feature film is a story of personal alienation.” Paramount to Bailey’s piece was the idea that empathy, looking outward instead of ever-inward, was the brave way towards, as he puts it fittingly, “the stories we don’t tell.”

Filmmaker Kevan Funk, whose moving hockey film Hello Destroyer (itself a systemic critique of masculinity and Canadian culture) had just played TIFF Bell Lightbox as part of Canada’s Top Ten Film Festival, wrote him an email. Here’s the full letter, printed with permission from Funk, which offers its own critique, both of the filmmakers being tasked to tell Canada’s stories and the institutions impeding them. Join the conversation by replying on Twitter, or send an email response here. TIFF wants to hear from our Canadian filmmaking community and your resonse could be excerpted in a further piece on The Review.

Hope this email finds you well. We've met a few times, mostly in passing at TIFF functions and at the Telefilm Eye On Canada event in Los Angeles. Anyways, I wanted to reach out after reading your op-ed in the Globe over the weekend. There is a spirit to your position that I deeply, fundamentally agree with. I fervently believe that Canadian filmmakers need to be much more bold in terms of the films that we are producing, particularly with regard to a sense of agency that is anchored in a broader cultural exploration and interrogation. These are the films that I want to see made in this country. I would argue that these are the films that need to be made in this country, in regard to fostering a true sense of national and international relevance. Our constant conversation about the crisis of Canadian identity (and the inability to articulate what that is) in a large part has to do with the fact that the majority of our cultural output (particularly in the arena of film and television) does nothing to engage with that narrative.

What I found problematic, or profoundly oversimplified, about your op-ed is the assertion that the overwhelming majority of responsibility should be laid at the feet of filmmakers. Being one of these implicitly implicated filmmakers, I don't say this from a defensive position but from a place of genuine interest in discourse. Again, I flatly feel that there is a dearth of quality films that get made in this country and we should not be afraid to talk about it. I also don't subscribe to the “burn down the institution” position, which I think is overtly antagonistic, reductive, and mostly useless. It ignores the reality of the conditions in which most filmmakers in this country need to operate. But I do think that scapegoating filmmakers, even to force an altruistic motive, is equally frustrating in its ignorance of the systemic issues that exist in the Canadian film industry.

The institutional and corporate conditions that exist in this country very much shape the films that get made. I can speak from experience, at length, about the radical disinterest that Canadian distributors and broadcasters generally have for the type of films that you are appealing to filmmakers to make. That same indifference exists, to a more relative degree, within the nation's cultural funding bodies. (Although, in those cases, it often essentially comes down to one person's opinion or taste). We happened to have some incredible champions of our film Hello Destroyer at Telefilm West, who offered unconditional support, but I know that our experience is much more of the exception than the norm. Not only is there often a contemptuous rebuttal of bold, culturally invested work, there is an incentivized path to mediocrity. In fact, it’s celebrated.

One does not need to look much further than the Movie Nights Across Canada screening of Mean Dreams at the Winter Garden last week to see this on full display. There are a number of people involved in that film that I deeply respect and admire. Yet, to have the Minister of Tourism, Culture and Sport laud a film that is the posterchild for what is wrong with English Canadian cinema (the transparent Hollywood proxy that painfully avoids any identifiable Canadian elements), then experience a reception full of industry power brokers propagating a delusion that what they just watched was somehow championing Canadian culture is an embarrassment. It’s a really problematic embarrassment too, in terms of the standards and expectations that it sets across the industry.

I mention this not to pick on one specific film. I mean, even if the films that you're calling for do get made, how likely is it that they would be supported by any of the major distributors or broadcasters? Trust me, I know that the distribution conversation is a very complex one (it's a really tough game), but it gets tiresome sitting at, say, a Director’s Guild of Canada or TIFF event, hearing executives go on at length about their passionate support of audacious and inimitable Canadian filmmaking when there is little tangible proof. They need to be held to account in this conversation as well. For example, what are the (sort of) Canadian crown jewels of eOne’s upcoming slate? Goon 2 and the sequel to Bon Cop, Bad Cop? If we're going to build a healthier, more dynamic industry, then everyone needs to play a more active and aggressive role, in terms of stepping up to the plate. Even if there is risk involved, change doesn't happen without courage. 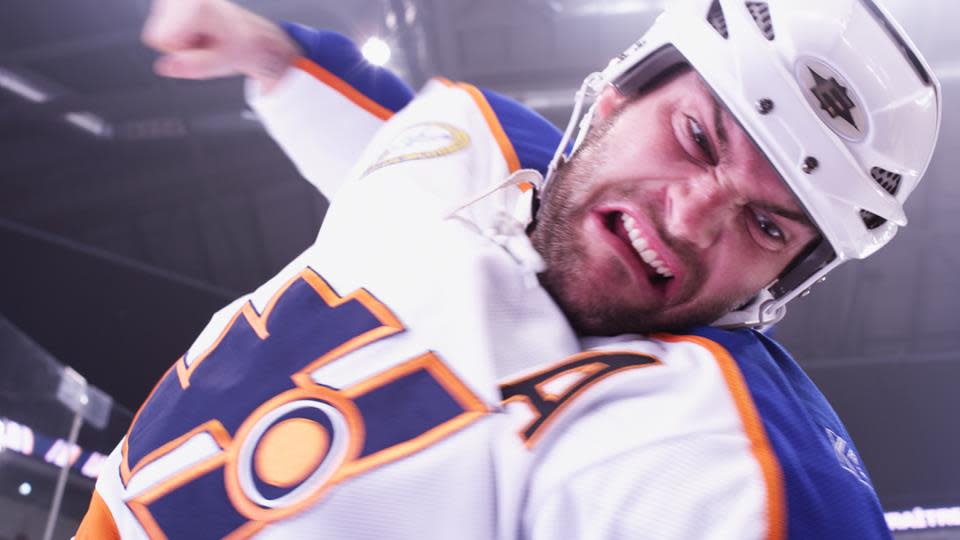 A still from that other Canadian hockey movie Goon, directed by Michael Dowse.

I would extend a similar critique to the media (not in a Trumpian fashion, however). For example, our film has a theatrical release at TIFF Bell Lightbox, beginning on March 10. Even given the elements working in our favour (the validation of being selected for TIFF and Canada’s Top Ten, a handful of high-profile Canadian Screen Award nominations, and a subject matter that the general public has an insatiable appetite for), it is still nearly impossible to get any real traction in terms of substantial, meaningful coverage. This is not a cry of victimhood, just a question of what more can a film at our scale do within this country to warrant notice? That profile, or lack thereof, is very much tied to the ultimate success of a film our size. The only major media coverage surrounding the Canadian film industry, year after year, is the same exhaustive narrative around “what's wrong with the Canadian film industry?” This myth-making is regurgitated and reworked time and time again in an incredibly superficial way. It becomes a self-fulfilling prophecy. If Canadians are only hearing about how terrible Canadian films are, I'm not surprised with the lack of interest that they have in searching out our work. I don't want us to heap praise on films that don't deserve it, simply because they are Canadian (in fact, I find that maddening). Yet, I think there is a responsibility for the media to pay greater attention and therefore help Canadians take notice.

What you're asking for from filmmakers is already hiding in plain sight, to some degree. They may still be too few and far between, but in watching the landscape closely for the last seven years, there is a clear trend in the right direction. Ironically, if you look to Canada’s Top Ten, there are several films with these interests that you're seeking. I believe Ashley McKenzie's film Werewolf does much of what you're calling upon, as well as Mathieu Denis and Simon Lavoie's film about the 2012 Quebec tuition protests, Those Who Make Revolution Halfway Only Their Own Graves. Johnny Ma's Old Stone is obviously set halfway across the world, but it is the type of story you're talking about. I don't know if you've seen my film or how you feel about it, but so much of what you said in that op-ed resonated with me because of what I set out to do in making Hello Destroyer. I can see how someone might decide to categorize my film as a coming-of-age story about an isolated character, but my real interest was one of looking at systemic issues of violence in our culture, confronting the construction of history in this country, and trying to grapple with a sense of identity within the specific context of Canada. As a filmmaker, I am much, much more interested in cultural introspection than personal.

There is so much more to discuss, such as how an environment can be cultivated to see Canadian films be viable. Ultimately, all I am really interested in here is a conversation. Because I really believe that this industry can thrive and that Canadian film can be vital, essential, and successful. I don't want to be someone sitting on the sidelines, I want to be active and engaged and I want to inspire others to be. We all carry a very real responsibility for raising the bar in this country. I think it’s tremendously important to create space for honest, blunt, self-examination throughout the industry, without people fearing some sort of punitive institutional retribution for critical engagement.

Again, I hope that this does not come off as a filmmaker venting due to some perceived offence because that is not my intention at all. I feel tremendously lucky to have gotten to make my film on my terms, and as a result, have a platform to express my opinion. You hold a position of enormous power in terms of the pulpit from which you speak. Although I can agree with your need for a call to arms, I feel that that call needs to resonate much more widely.

I hope this is a conversation that is to be continued….

The Werewolves and The Destroyers

The Next Generation of Canadian Cinematographers