The Uniform of the Male Gangster

The clothes make the wise guy 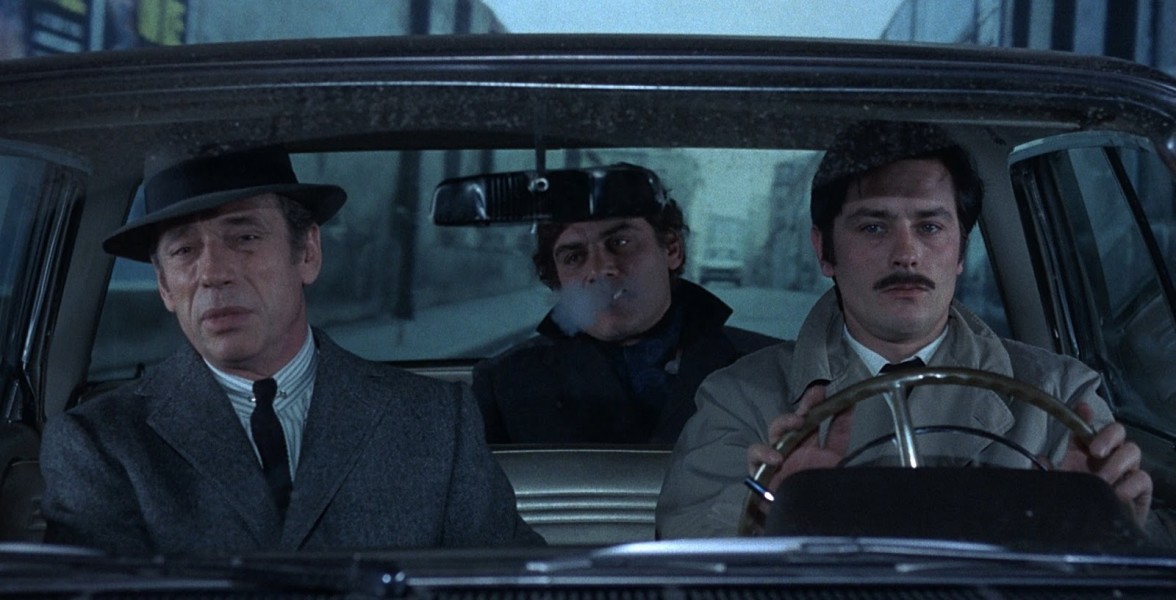 Few films lay bare the brash, blind ambition of the gangster — or display his fashionable flare — better than Brian De Palma’s 1983 film Scarface. A crime saga retooled for maximum ‘80s gloss, the film not only satirizes the materialism of its era, but presents the immigrant cocaine dealer as the inheritor of the rags-to-riches gangster archetype later seen in hip-hop videos from Notorious B.I.G. to Drake. 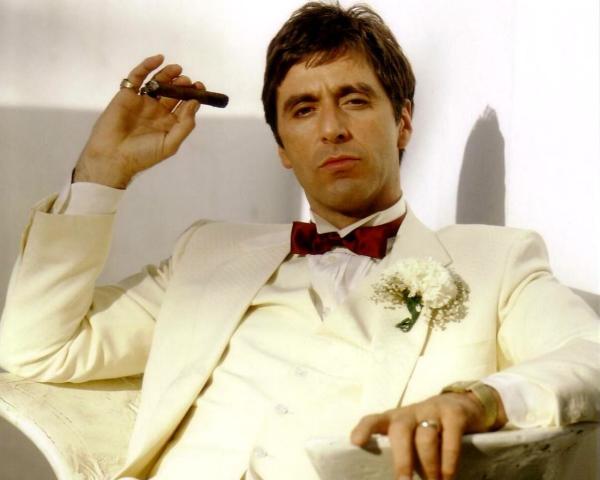 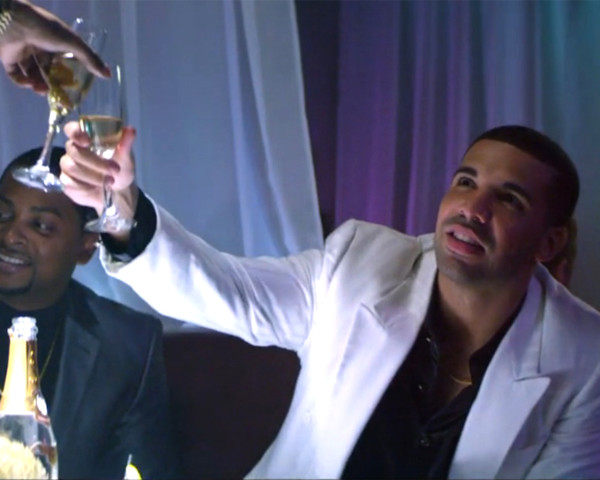 While Tony Montana’s Hawaiian shirts, wraparound sunglasses, and wide collars may not toe the line of good taste, they’re perfectly in keeping with the over-the-top sartorial spirit of the gangster film. The truth of the matter is that the genre is almost obsessive about men’s fashion. From Edward G. Robinson in a pinstripe suit in Little Caesar to the swaggering Jean-Paul Belmondo in any number of films from the French New Wave, onscreen hoodlums have long displayed their ill-gotten gains in the most outlandish ways possible. You can catch many of the most stylish perpetrators in two series screening this summer at TIFF Bell Lightbox: Army of Shadows: The Films of Jean-Pierre Melville, and Panique: French Crime Classics.

Whether they be colourful silk shirts or razor blades sewn into flat caps, what these men wear is a signifier of power and is symbolic of a criminal code — not to mention pretty damn stylish. In no genre more than the gangster film, the clothes make the man. Here are our best guesses as to why.

The golden age of American movies coincided with the worst financial moment in the nation’s history. Yet audiences still flocked to see the finery of gangster anti-heroes, seemingly unbothered by their own money troubles. James Cagney, George Raft, and Edward G. Robinson were men of action — to them, it was better to be hustling for a dollar than to be helpless on a breadline. Depression-era audiences seemed to admire this “take it all” mentality — and the natty ensembles that went along with them.

In The Public Enemy (1931), James Cagney is measured for a new suit by a posh tailor. “I need extra room here,” Cagney quips, tugging on the front of the jacket. The best tailors know you need roomy pockets to pack heat. After all, the gangster’s get-up needs to be as functional as it is fashionable. 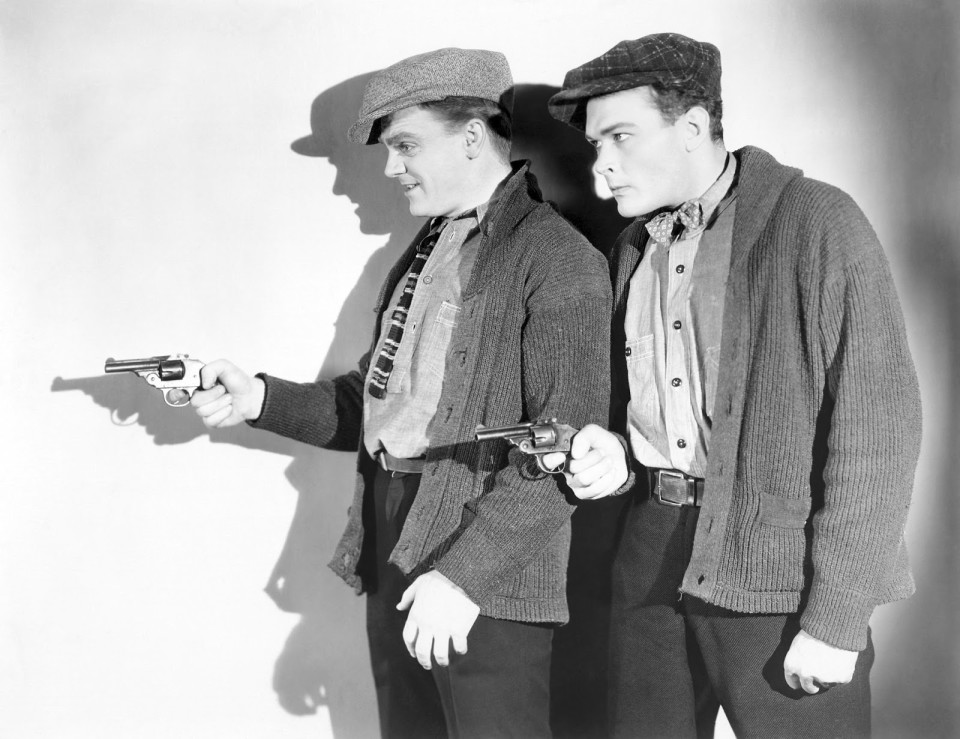 Still, it wasn’t just sartorial influence that these ‘30s ne’er-do-wells had. The immigrant dream of success in America is inextricably tied to wealth and upward mobility. The rags-to-riches tales of their success were much emulated. Even Cuban immigrant Tony Montana remarks at the start of De Palma's Scarface to a U.S. customs officer: “I watch the guys like Humphrey Bogart, James Cagney. They teach me to talk. I like those guys.”

Back in the heady days when a tommy gun was known as a “Chicago typewriter,” the actual criminals prowling the streets often got the best sense of themselves from watching their Hollywood imitations. Black-market hucksters based their looks on George Raft’s distinctive style as seen in the original Scarface, Manpower (with James Cagney), and Some Like It Hot (where he was sending up his persona) — his trademark white tie against a black shirt, for instance. 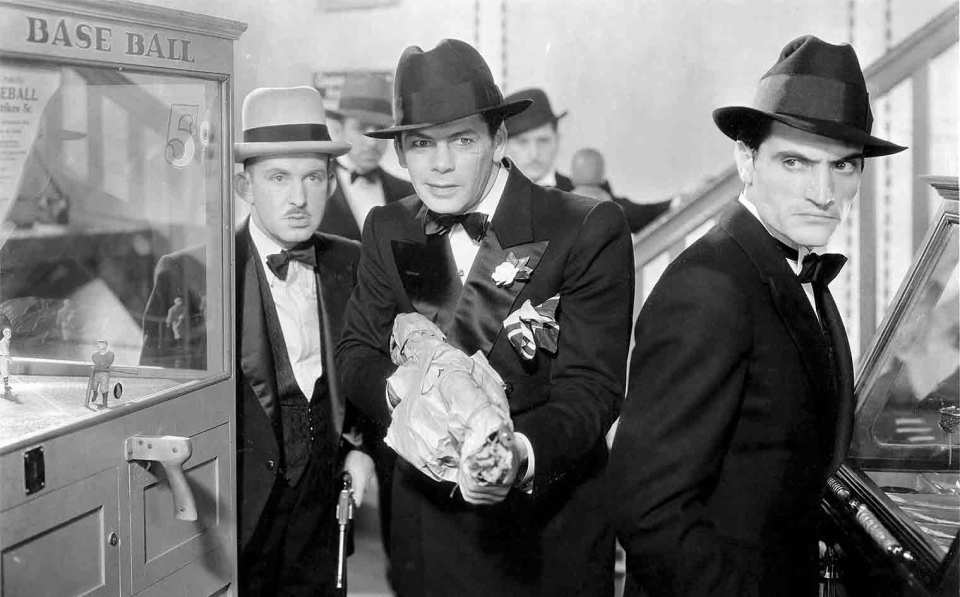 Al Capone was known as a peacock, even among the Hollywood set. According to a Los Angeles mobster who toured Capone around the movie capitol in the mid-1920’s, his pink and banana yellow ensemble turned heads everywhere he went.

Of course, it wasn’t only English-speaking hoodlums who proved stylish. New Wave proponent François Truffaut (whose stylish Shoot the Piano Player screens alongside French crime films by Louis Malle, Jules Dassin, and Claude Chabrol this summer) favoured the realm of the juvenile delinquent in his Antoine Doinel trilogy, decking out his troubled petty thieves in jeans and boots. Even before Jean-Luc Godard’s Breathless (1959), star Jean-Paul Belmondo had regular work in stylish policier crime films. He became an icon as a car thief on the run, with his wide ties, old-school hats, and constant aping of Humphrey Bogart’s mannerisms. (For two radically different sides of Belmondo, see how Jean-Pierre Melville uses the actor in Le Doulos and Léon Morin, Priest.

With his deceptively smooth appearance, Melville muse Alain Delon might be ultimate French tough guy. He’s got the face of an angel and the disposition of a reptile. In the 1960 adaptation of Patricia Highsmith’s The Talented Mr. Ripley, titled Plein Soleil (also screening at TIFF), Delon is less gangster than slick, murdering sociopath. But he’s armed with a wardrobe every ‘60s playboy would die for. 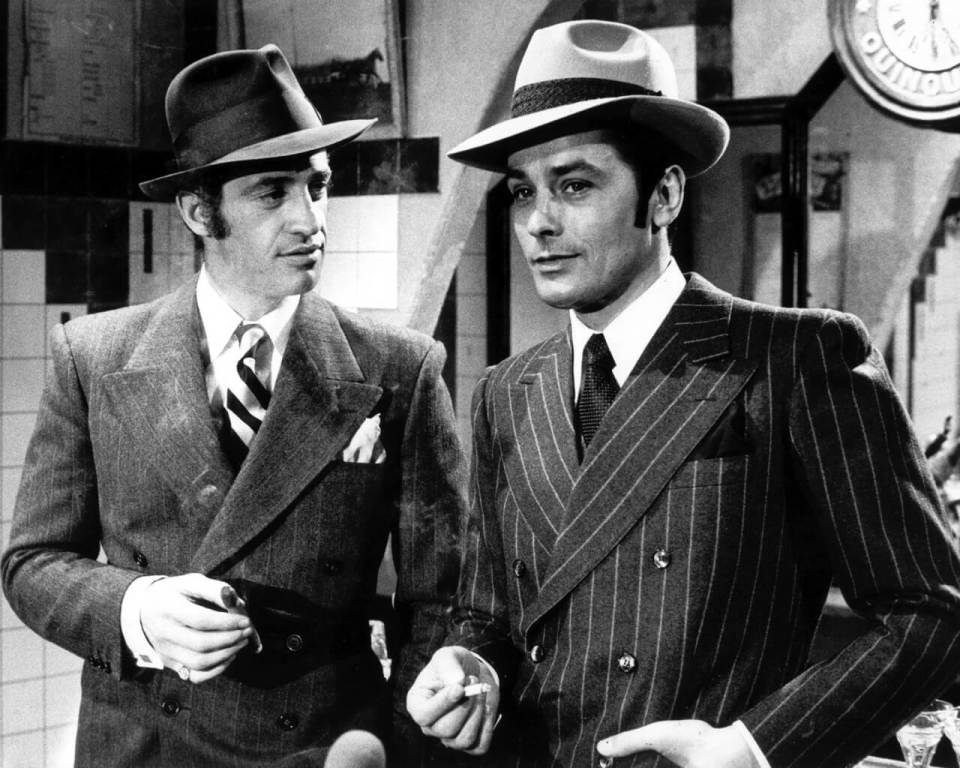 Other French films happily looked to the past for style tips, too. Belmondo paired up with Delon in 1970 for the period gangster flick Borsalino — so named after the popular snap-brim hats worn by Marseille toughs back in the 1930’s.

It takes a lot of guts to riddle rival territory with machine-gun fire or transport bootleg moonshine across state lines. So why not have a uniform the same way a solider might? Don a wide-brimmed fedora and a trench coat, and you’re ready for action.

Uniforms, regardless of the occupation, give their wearers a sense of purpose. Take Jean-Pierre Melville’s films with Alain Delon, particularly Le Samouraï (1967). In this movie, Alain Delon is a lonely contract killer, preoccupied with the act of dressing — as if it had a ritual importance. Looking at his reflection and adjusting his hat seems to sharpen his ruthless clarity. 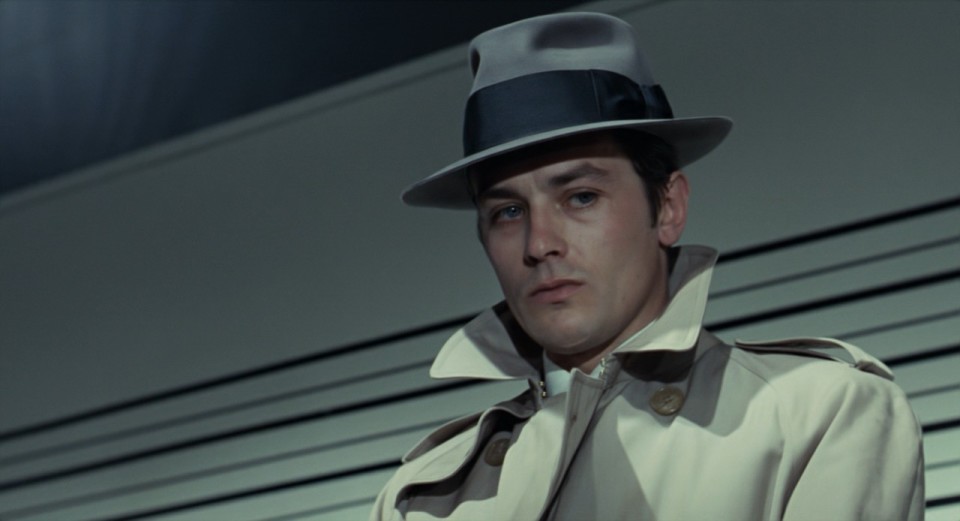 Besides, without the right wardrobe, how will everyone identify you as a gangster? Respect is key, as Henry Hill informs us in Goodfellas. As an adolescent recruit, he returns home in a double-breasted suit and shiny leather shoes. His mother is aghast. “You look like a gangster!” she says. Henry beams.

Movies often tell us there’s something untrustworthy about a dandy. A man who spends undue time on his appearance is almost immediately under suspicion. As early as 1943, Hitchcock gave us the dapper, smolderingly intense Joseph Cotten as Uncle Charlie (also known as "the Merry Widow Murderer") in Shadow of a Doubt. 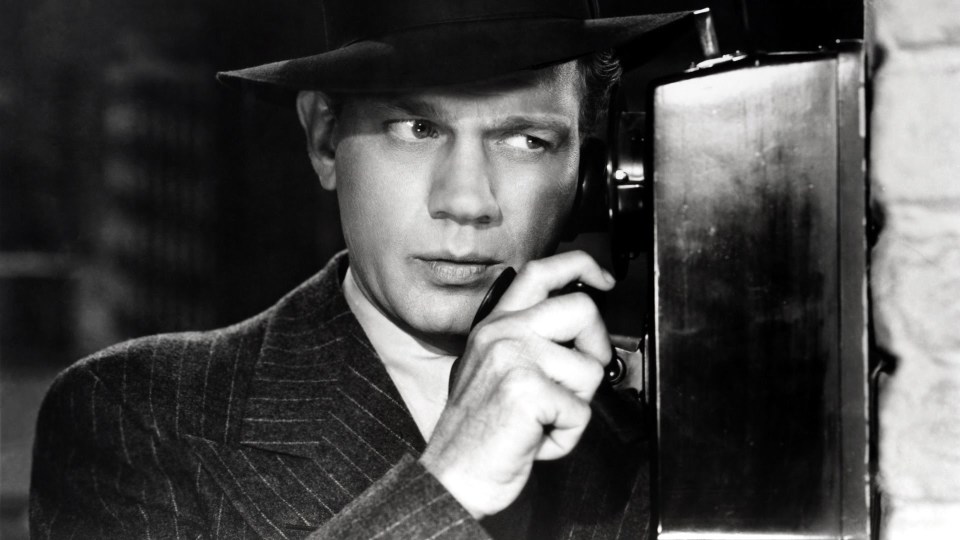 Then there’s the slippery Steve McQueen in The Thomas Crown Affair — a criminal mastermind in possession of plenty of three-piece suits, but few concrete motives. 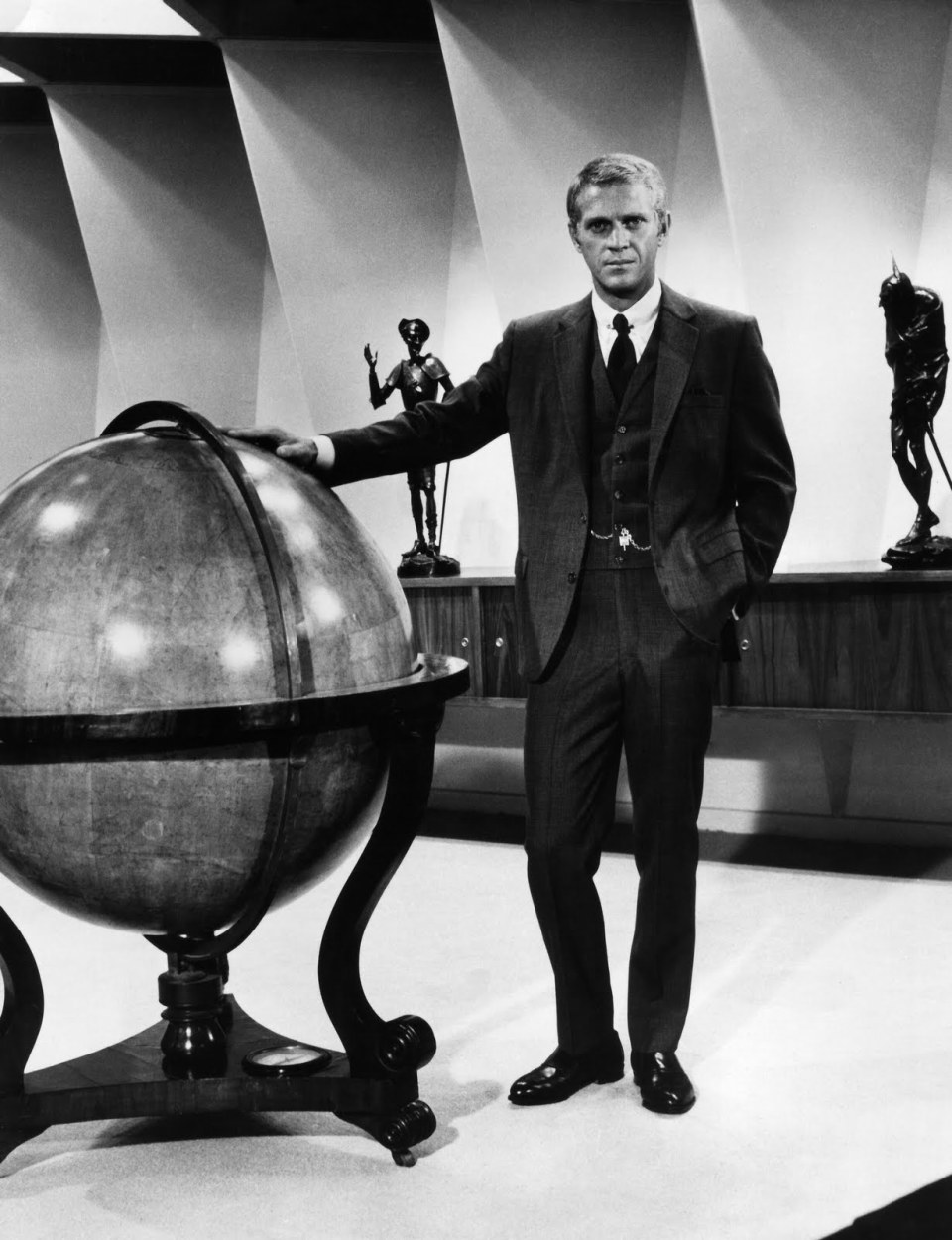 So there you have it. All the bastions of old-school machismo were as well-known for their vanity as they were for their toughness. In the age of #masculinitysofragile, that’s a fascinating sartorial theme.