The Smile of Setsuko Hara 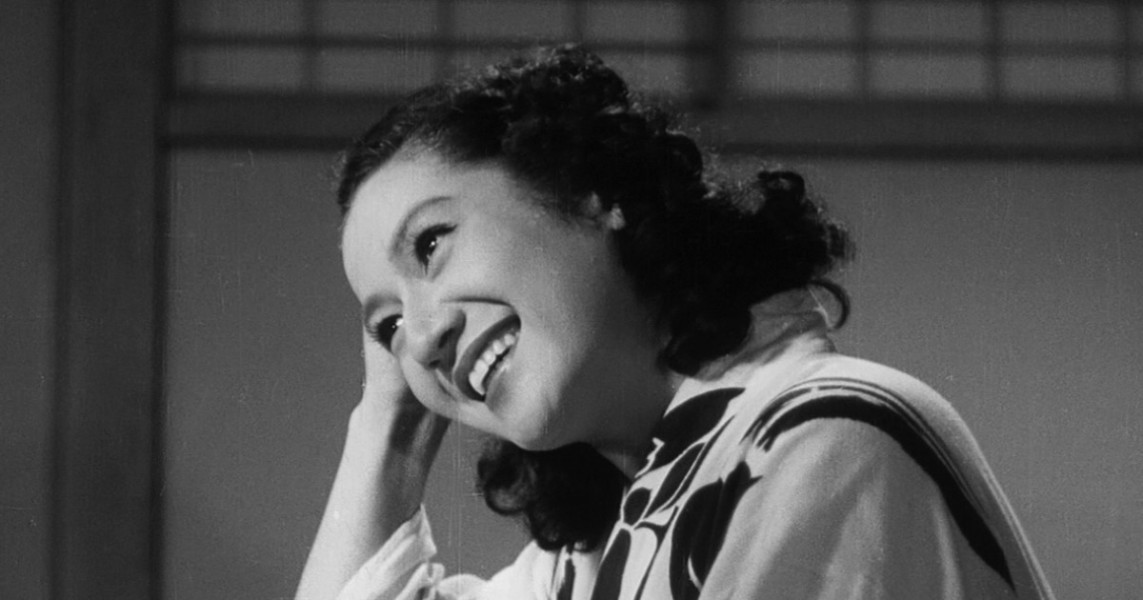 The second in a series of profiles of the great actresses spotlighted in this season’s flagship TIFF Cinematheque programme Summer in Japan.

“Every Japanese actress can play the role of a prostitute to some extent; however, it is rare to find an actress who can play the role of a daughter from a good family,” Yasujiro Ozu once said about the great star Setsuko Hara, whose first collaboration with the director, Late Spring (1949), marked a turning point in both their careers. With this film, Ozu inaugurated the late-career phase for which he has become best known: contemporary family dramas (shomin-geki) that tell deceptively simple stories of marriage, separation, parents and children, and the gap between generations, rendered in Ozu’s increasingly refined and rigorous formal system.

For Hara, meanwhile — who had been born Masae Aida, but had her name changed by her studio to Setsuko Hara when she began acting at age 15 — Late Spring began the process by which she was to become almost synonymous with Ozu’s oeuvre, even as she continued to appear in films by other major directors such as Akira Kurosawa and Mikio Naruse. Hara’s first three films with Ozu — Late Spring, Early Summer (1951), and Tokyo Story (1953), unofficially known as the “Noriko trilogy” based on the name shared by all three of her characters in these films — shaped her screen persona as the “Eternal Virgin”: a beautiful, serene, ever-smiling girl/woman who is torn between traditional family duty and the inner passions that her life as a modern, educated woman has awoken within her. When Hara abruptly abandoned acting shortly after Ozu’s death in 1962 and disappeared from the spotlight without any explanation — living a secluded life in a country house until her death in 2015, never giving interviews or appearing in public — this image became fixed (or frozen) for all time, locking her completely within Ozu’s universe. 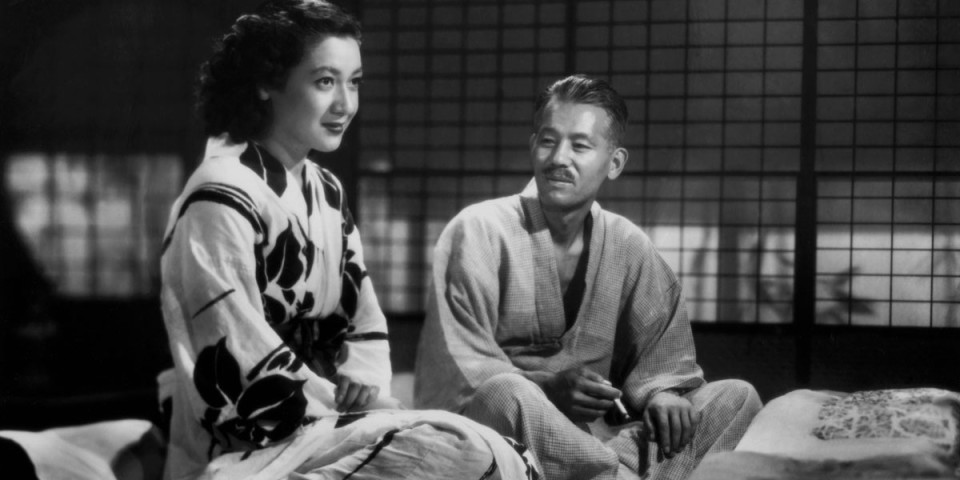 Just as Kinuyo Tanaka’s mastery of movement made her the ideal avatar for Kenji Mizoguchi, who made exquisitely expressive use out of the positioning and movement of human bodies, so Hara’s “Caucasian” (as some Japanese critics charged) face made her perfect for Ozu, who fixed his frequently still frame on faces and their small, telling changes in expression. Much of Hara’s power as a performer lay in her enormously expressive eyes; see, for example, the concert scene in Late Spring, in which Hara’s Noriko spots the woman who is supposedly set to marry her beloved widower father (Chishu Ryu), and conveys her barely suppressed resentment through a series of simple gazes: at her father, at the woman, and at the ground. The way in which Hara could thus suggest forceful emotions roiling beneath the surface of her divine smile made her ideal for Ozu’s delicate, perhaps paradoxical balance between the pessimistic and the affirmative: in Tokyo Story, in one of the most famous exchanges in Ozu’s cinema, Hara’s second Noriko replies to the question “Isn’t life disappointing?” with a serene smile that belies her confirmation (“Nothing but disappointment”).

What keeps Hara from becoming monotonous or grating in her tranquility is the sense we get of how precariously it is being maintained. In a later scene in Tokyo Story, Hara’s widowed Noriko speaks with her father-in-law (Chishu Ryu again) after the death of his wife, and shyly confesses that “I am not the nice woman she thought I was … I can be quite selfish.” Lowering her head slightly, her smile slowly fades as she speaks of her loneliness, and she turns her head as if she wants to cry. A few seconds later, she actually does burst into tears and covers her face with her hands; Ozu’s camera lingers on her while a childish song plays on the soundtrack, which creates a poignant, moving effect.

These moments of self-revelation are rare in both Ozu and Hara’s oeuvres, which makes them all the more powerful when they do occur — and they attest as well to the range of Hara’s talent, which far exceeds the “Noriko” persona from Ozu’s trilogy. While she played variations on the Noriko character in such Naruse films as Repast (1951) and Sound of the Mountain (1954), in her two films with Kurosawa — No Regrets for our Youth (1946) and The Idiot (1951) — she is exuberant, expressive, and assertive. Even her work with Ozu sees her displaying radically different qualities from those with which she is so often associated. In Tokyo Twilight (1957), by far Ozu’s darkest film, she plays Takiko, an unhappily married woman who tries to help her wayward younger sister by confronting their unfaithful mother. When she meets with her estranged parent, her famous smile is gone: her expressionless face shows no emotion, and her cold behaviour barely conceals her fierce hatred of the woman. Bitter, resentful, and seeming as if marriage has sucked the life out of her, Hara’s Takiko is miles removed from Noriko; and while Hara would never again play such a character, we can see this as an intermediate role between the young women of the trilogy and the graceful widows who don’t want to remarry in Ozu’s Late Autumn (1960) and The End of Summer (1961). 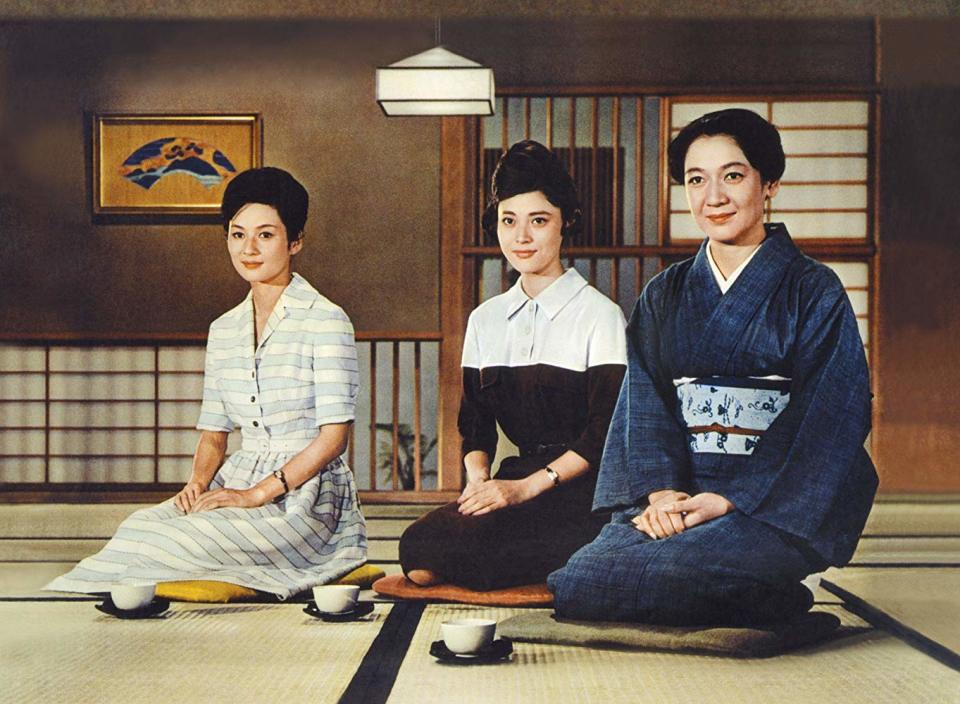 If serenity is the term we most often associate with Hara’s screen persona, it is almost always accompanied by a certain solitude, at least in the romantic sense. Even in Late Spring and Early Summer, in which her Norikos end up married (a good deal more happily in the latter case), Ozu never allows Hara a love scene, never shows her enjoying an intimate relationship beyond the filial. This is what makes her role in one of her final films, Naruse’s Daughters, Wives, and a Mother (1960), so unique, and affecting. Hara plays Sanae, a long-married woman who regains her freedom after her husband’s sudden death. During her brief days of independence, she meets a young man (Tatsuya Nakadai) and falls in love with him. In their few intimate encounters, Hara’s gaze and expression evince a combination of sadness, fear, and joy — an aliveness that becomes all the more poignant at the end of the film, when Sanae sacrifices her happiness and agrees to remarry to secure the financial security of her family. A typically tragic conclusion to a Hara film — but a mere two years later, Hara defies the film industry and abandons acting, maybe to pursue Masae Aida’s happiness at last.

Sympathy for Mr. Sadness: In Praise of Mikio Naruse