The Mask of Monica Vitti

Durga Chew-Bose on the haunting visage of Antonioni's muse

This first image I’m proposing cruelly occurred to me while watching Michelangelo Antonioni’s first colour film, Red Desert, and in a perhaps selfish act I’m sharing it with you in order to loosen its hold on me. What I’m picturing is Monica Vitti’s face — that phenomenal, cat-like face. Phenomenal not merely because of her striking beauty, but because Vitti’s face possesses contraries. She is somehow sharp yet pillowy at the same time. Padded, yet tapered: lips pouting or opened just so, but always propped on the round kindness of her crescent chin.

But that’s not entirely what I’m imagining — not her face alone, though that’s certainly part of it. Since seeing Red Desert again, I’m imagining Monica Vitti peeling off her own face. Starting at her hairline and then, as if gently rolling open a delicate scroll, peeling off her freckled skin, carefully removing it from over her eye slits and down the cushioned curve of her cheeks, warily over the tight point of her nose, and then around her lips; unfastening her face from the organization of its structure.

I’ll stop there, at Vitti’s jawline, because what struck me while watching Red Desert was Vitti’s mask. The movement of her eyes, darting, still or startled, fretful and spooked, panic-stricken, distrustful. Her eyes, as if seen from behind a mask. Perhaps this has something to do with the contradiction I mentioned: how her face stings but assuages. 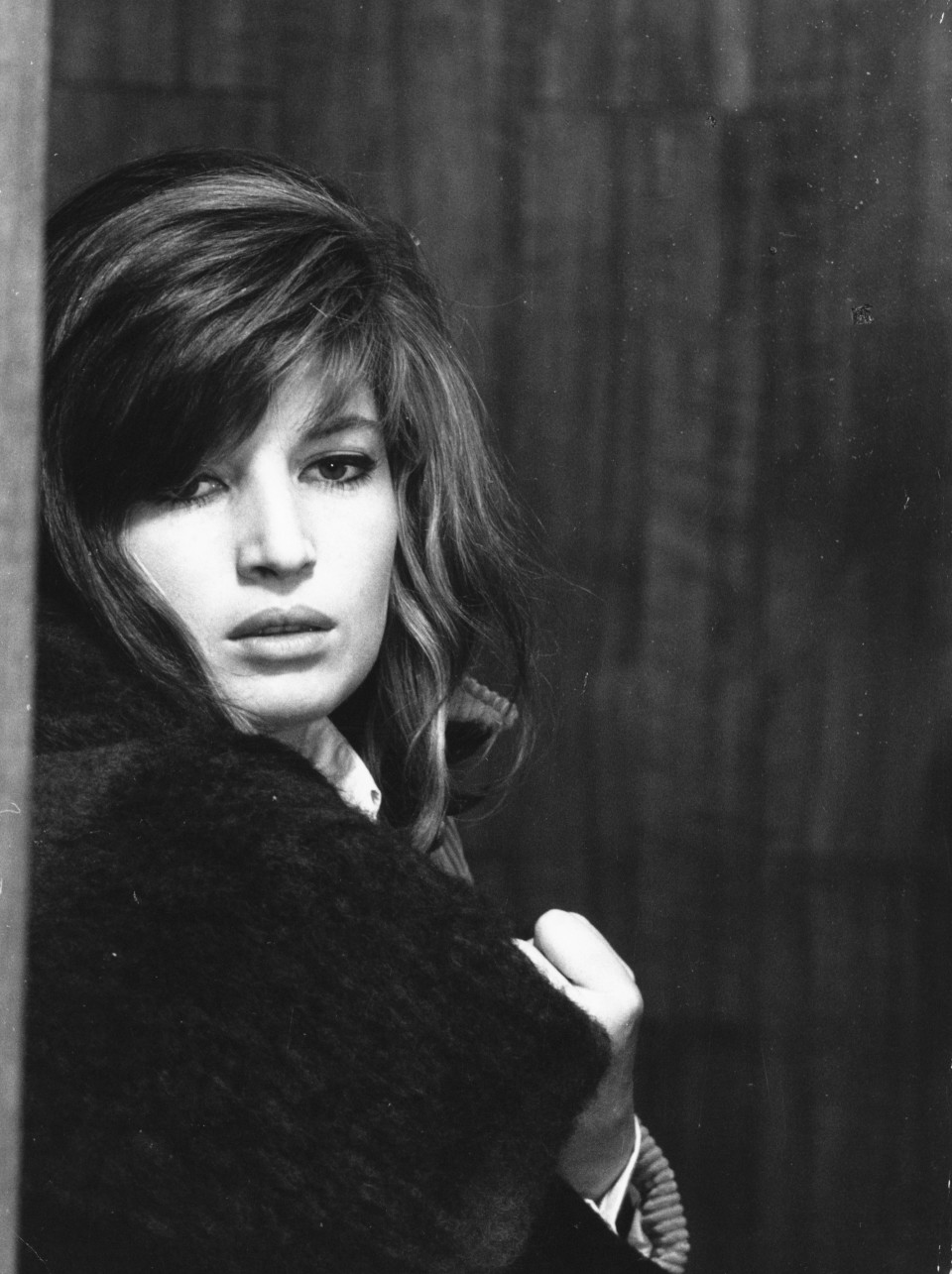 But to call her face a façade would be a misreading. The mask represents Vitti’s undeviating purpose. Her capacity to express desire is rationed. What makes Vitti’s performance poignant is how she shows emotional migration — a resettlement of the self — by using her face and her body to undermine the film’s controls. How she uses her feet, for instance, to catch the corner of a newspaper as it blows down the street. Vitti’s Giuliana confirms the day’s date, not from knowing it — quotidian consciousness is of little urgency to her — but from being alerted to it. Like a signal blowing towards her and then, just as quickly, blowing away. What could potentially ground Giuliana, or situate her in time, is presented as fleeting.

There’s more. The enormous demands of having to appear “fine” mean wearing the wrong shoes when crossing a polluted estuary in the north of Italy. Mud collects on her heels. Her husband shows concern, but still walks ahead. “Her gears still don’t mesh,” he says of his wife, who is recovering from what he dismisses as merely an accident. A woman and her equipment — that’s why we call her broken.

Giuliana touches the world hesitantly. Her interactions are attempts at making contact in order to feel, instead of fear. Vitti’s ability to show the virtues of unease, again with a face that hardly moves — words come out, but we wonder if it’s actually the voice in her head — seems inexhaustible. The way she holds back provides possibility. 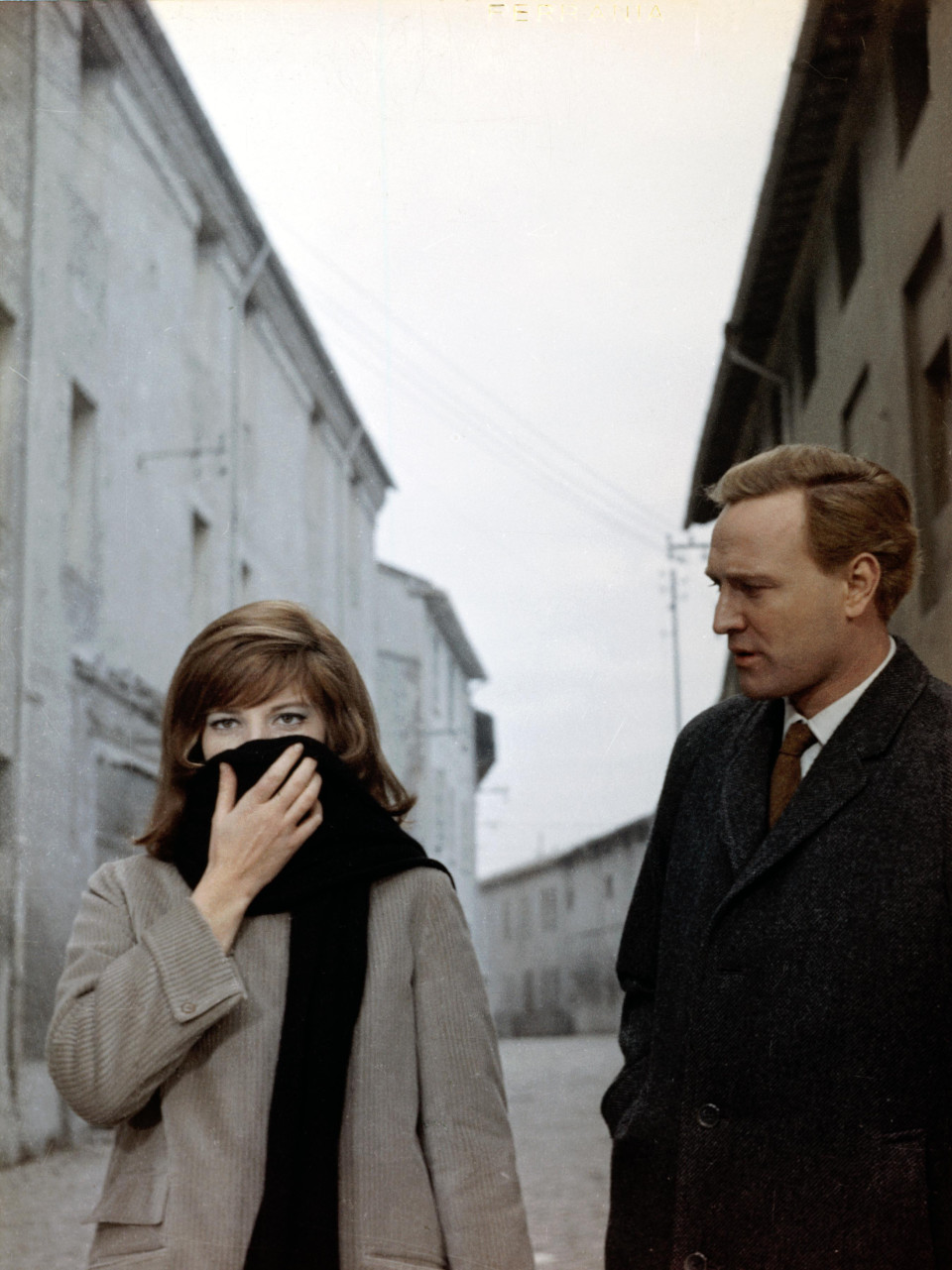 Four minutes and nine seconds into Red Desert, we see her. While the film is in colour, she is the first… not colour, exactly, but potential for colour. Colours that will follow, like mint, orange, pink. Mauve. Peaky yellow, acid yellow. In that first glimpse of Vitti, her jacket is green, the colour of castelvetrano olives. It’s as if she invented the colour, four minutes into Antonioni’s film. 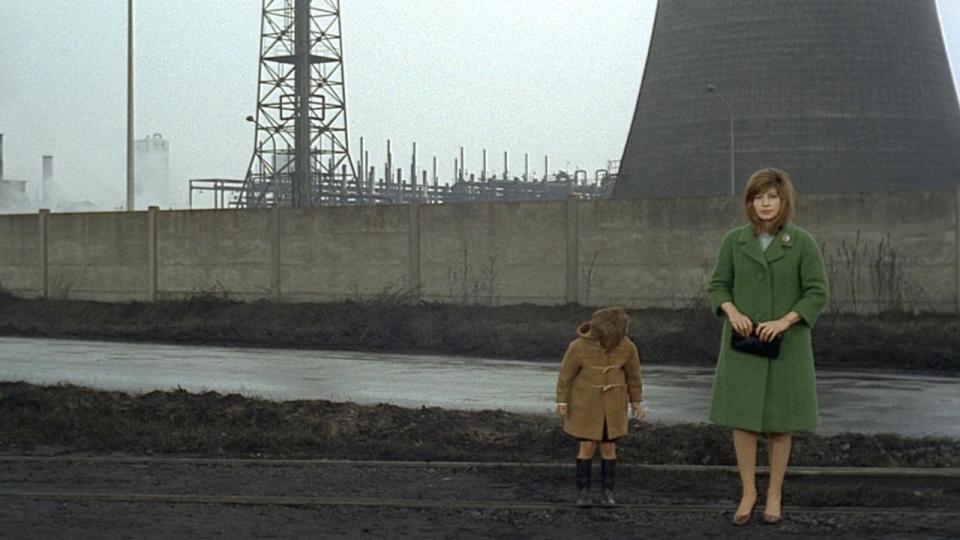 That’s Vitti’s consequence: she can look anonymous, but like the first. She clutches a sandwich with both hands, wildly eating it like no one has ever eaten a sandwich before. She makes eating a sandwich look like a secret. She handles and tastes a quail egg as if it were a chocolate from a box of chocolates. She ducks under the covers and, suddenly, the act isn’t cute or seductive, but violent. Vitti’s teased, tousled hair is violent; loose strands swarm. Outside, her eyes stay fixed and open as winds pick up; she shivers without blinking. When Giuliana says “Sometimes I want to attack someone,” she reminds us that she too has targets, despite feeling like one. In one scene, Vitti’s face is the only face visible in thick, soupy fog; everyone but her fades. It’s sort of miraculous to watch a woman materialize while she herself is preoccupied with her own disappearance.

One day, Giuliana’s son is sick. He’s lying in bed, he can’t move his legs. She asks him, while bending his knee, “Where does it hurt?” It’s a question she could be posing to herself. But what interests me is how her son’s knee looks in his mother’s hands. It’s no longer just any knee: in Vitti’s hands, his knee seems extra tiny, tender. Nothing new or remarkable, and yet: Vitti. Her maternal disquiet feels true to how panic often anticipates reason.

In Antonioni’s industrial setting, I imagine other women, too — women who are running in order to experience some semblance of return. I hear the lonely cadence of Lisa Bowman’s voice as Cozy in Kelly Reichardt’s River of Grass. I see Gena Rowlands dancing Swan Lake as Mabel in John Cassavetes’ A Woman Under the Influence; I see what Cassavetes was up to marrying Mabel to Peter Falk’s Nick, a man whose gruff warmth confuses romance with denial, love with easy fixes. I’m picturing, too, Barbara Loden in her own film Wanda, wearing curlers and counting change at the bar, or wandering through a mall as if she’d just landed on the moon. 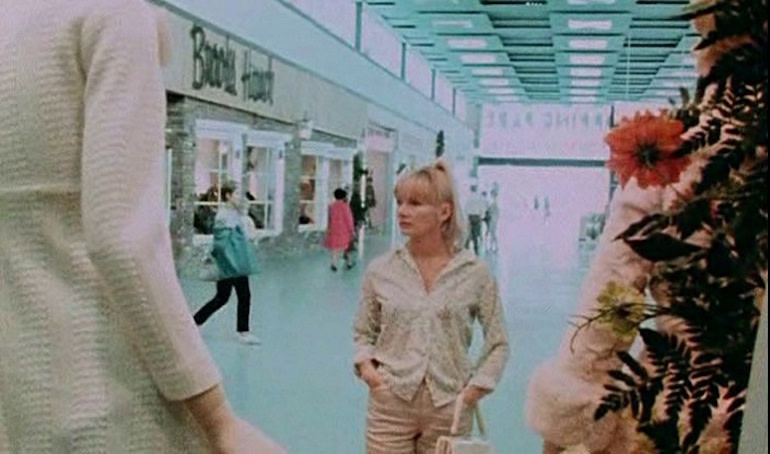 In all four films, we have women alone in near-lunar expanses, not walking so much as balancing. Limited to the edges of a highway, the sea (Red Desert); limited by a husband and his job, his cares, his foremen, a home and a family, the kids after school as they step off the bus (A Woman Under the Influence). Limited to a criminal and his car (River of Grass), or another criminal and his car (Wanda). These women are navigating their interior commotion — their death postponed, it feels — as if it were a nightmare, or a day off, or another inexpressible world running alongside their own, where, again, they are expected to be “fine”: to heal quickly, to be mothers and wives, to trust doctors and lovers. To be articulate about whatever intensities are submerging them, without, as Giuliana puts it, ending up with a “bunch of words strung together.” They’d like meaning, purpose, and the kind of connective passion that returns a woman to her body. Their lives bring to mind a line from Anaïs Nin’s The Four-Chambered Heart, in which the main character, Djuna, tells her lover Rango, “I must be a mermaid, Rango. I have no fear of depths and a great fear of shallow living.” 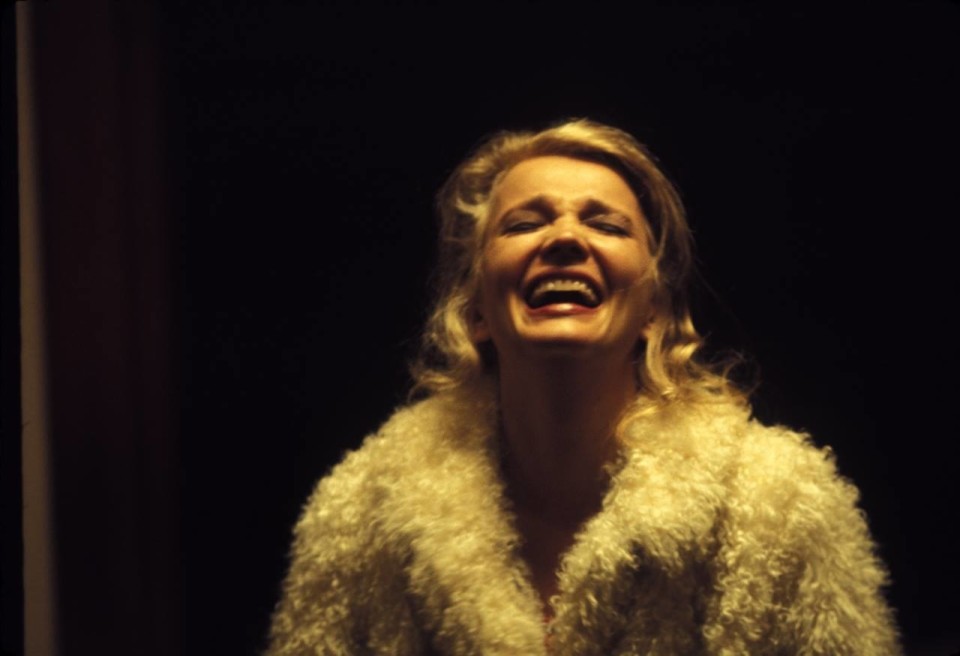 Gena Rowlands in A Woman Under the Influence

In one scene in Red Desert, Giuliana’s husband is playing with their son in his room. They’re spinning a yellow robot, something spaceship-like. “Look how it spins,” the father says. “Stand it on its edge.” (I kept thinking he may as well be talking about his wife: Look how she spins. Stand her on her edge.) “Know why it doesn’t fall?” he asks his son. “There’s a gyroscope inside.” He explains to his son that a gyroscope is a device used on ships to steady them on rough seas. I kept thinking: Giuliana, Cozy, Mabel, Wanda. All women in search of their gyroscopes. Burdened by boredom, or the sick suspense of deliberating on one’s life only to feel alienated by it or isolated within it. Women who are expected to promptly recover from moments of impact. To navigate emotional quarantine as if it were as simple as choosing the right shoes for a day trip with one’s husband or one’s lover. To make sense, for others. And tread lightly for others. And eat a quail egg seductively, for others. 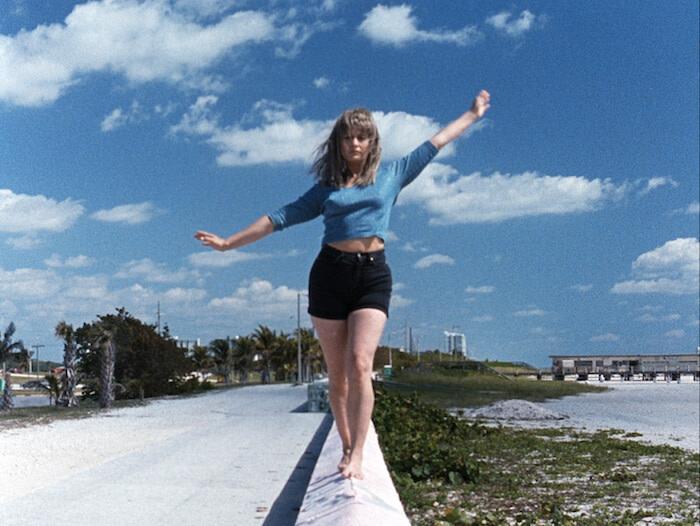 Lisa Bowman in River of Grass

Some women, like Giuliana, look most in pain — totally encumbered — while in bed, as if the bed were sinking into quicksand (one of Giuliana’s dreams). Some women seem at ease not in front of mirrors, but when confronted instead by their warped reflections in tinted store windows. These women are disturbed by the wrong lights, the wrong company, the wrong set-up of a room: she needs a chair that’s placed off to the side, or a sill to sit next to, or a corner to claim.

Another book came to mind while watching Giuliana: Clarice Lispector’s Àgua Viva, in which the female narrator states, “I can’t sum myself up because it’s impossible to add up a chair and two apples. I’m a chair and two apples. And I don’t add up.” Later, she says, “And so I realize that I want for myself the vibrant substratum of the word repeated in a Gregorian chant. I’m aware that everything I know I cannot say, I know only by painting or pronouncing syllables blind of meaning. And if here I have to use words for you, they must create an almost exclusively bodily meaning. I’m battling with the ultimate vibration.” She goes on, expressing the same frustration that Giuliana experiences with language and its limits: “To tell you my substratum, I make a sentence of words composed only of the now-instants.”

The now-instants: like the incommunicable terrors that keep Giuliana running and returning, and that flicker on Vitti’s face. The now-instants: Giuliana’s bulk, her trembling interiority, the sea, the sandwich, her son’s knee. The now-instants: how intently she studies a map of the world, seeking some place people go to get better. The now-instants, for which words and other people’s concerns are of zero consequence. Like thick fog rolling in, the now-instants obscure, but deliver a situation — a story — from which a woman can emerge.

*River of Grass* Finds a Road in Reluctance