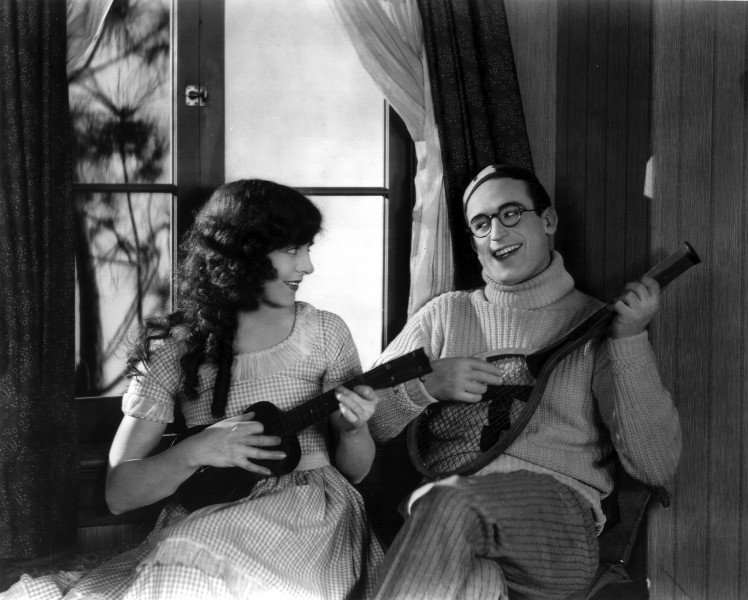 To mark International Women’s Day and celebrate the tremendous success of TIFF’s initiative Share Her Journey — a five-year commitment to increasing opportunities for women in the film industry, which as of January 2019 has raised a remarkable $2.2 million to directly support new programming aimed at tackling gender parity — here's another look at programmer Alicia Fletcher's invaluable series of essays about the trailblazing women of silent cinema. Find more links below to brush up on legends Nell Shipman, Lillian Gish, and Dorothy Arzner.

In the first years of his film career in the early and mid-1910s, Harold Lloyd struggled to develop a memorable comic character on screen. Debuting in 1915, Lloyd’s first recurring persona, the goofy, mustachioed “Lonesome Luke,” was essentially a knock-off of Charlie Chaplin’s already spectacularly successful Little Tramp. It would take a few years of experimentation before Lloyd donned those iconic spectacles and found his career-defining screen self. 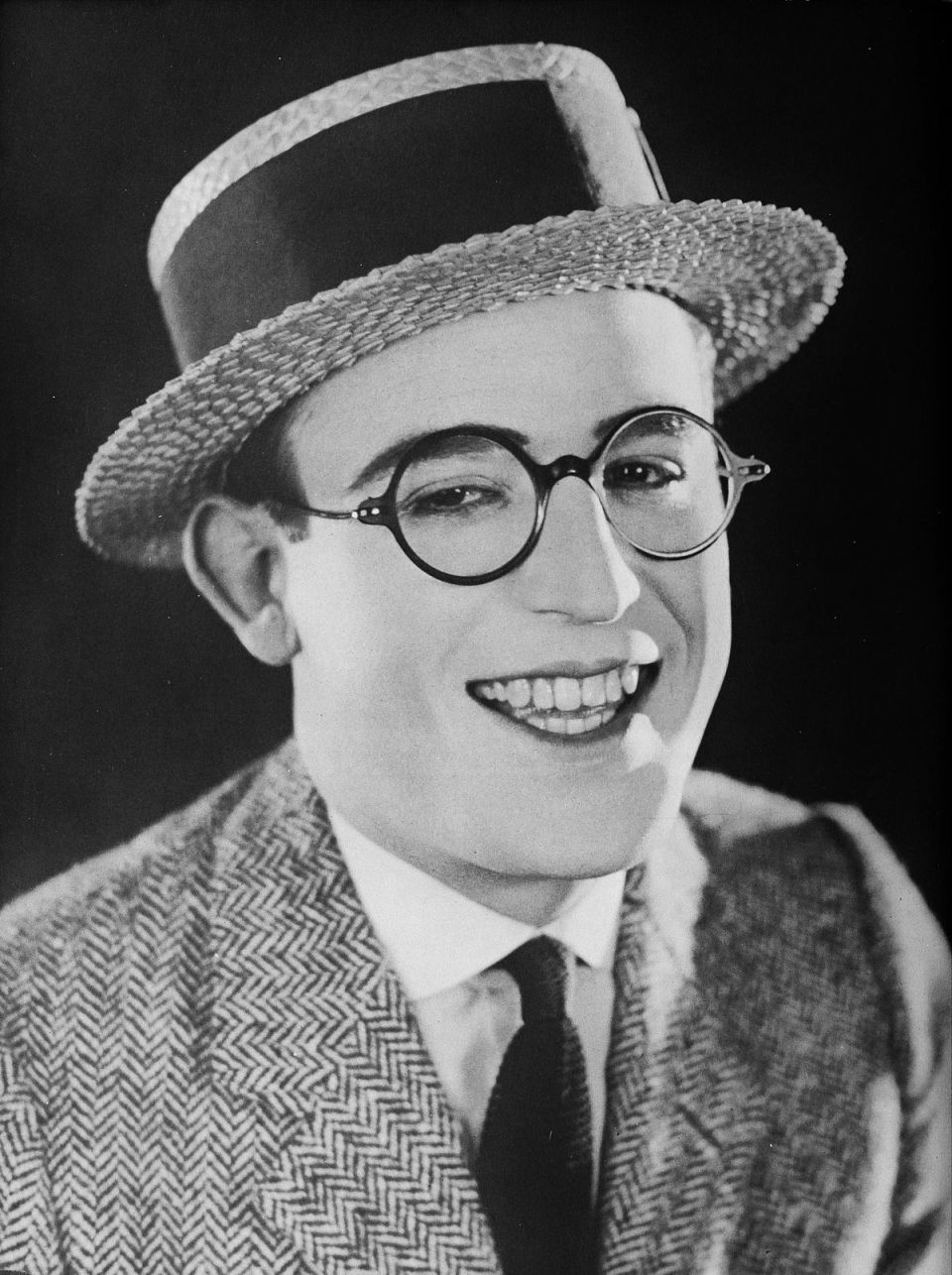 First appearing a century ago in the 1917 short Over the Fence, Lloyd’s “Glasses Character” was a Jazz Age everyman. Where Chaplin made audiences weep as much as laugh with his fusion of comedy and tragedy, and Buster Keaton astonished as much as amused with his awe-inspiring stuntwork and otherworldly, stone-faced stoicism, Lloyd was timid yet an indefatigable go-getter, a resourceful screw-up who was relatable and inspirational at the same time. And while those two other comic geniuses were the whole show in their films, Lloyd’s Glasses Character, in his unending quest for social acceptance, derived more of his humour from his interactions with other characters — particularly the women he ardently pursued.

Andrew Sarris once defined the difference between Chaplin and Keaton as “[that] between man as machine and man as angel, between girl as convention and girl as ideal.” The three actresses with whom Lloyd paired most often throughout his career — Bebe Daniels, Mildred Davis and Jobyna Ralston — all fell squarely between the poles of “convention” and “ideal,” displaying far more of their personalities and flexing their comic and dramatic talents to an extent that would never have been allowed in the films of Chaplin or Keaton. By looking at these greatly contrasting actresses, we can see how they helped shape Lloyd’s artistry over the course of the 1910s and ’20s, as he graduated from extra and occasional leading man to full-blown comic genius. 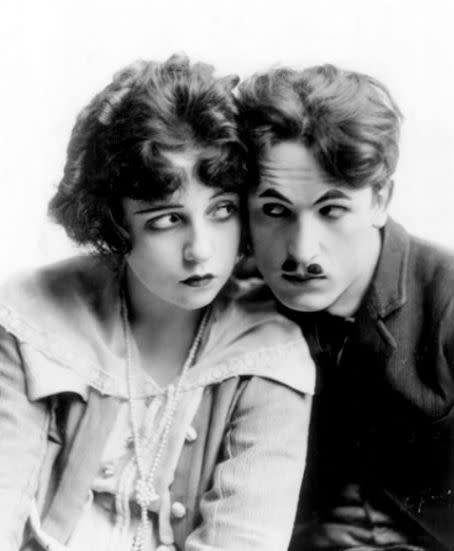 Bebe Daniels and Harold Lloyd in a promotional photograph for the Lonesome Luke series, ca. 1916

Born Phyllis Virginia Daniels, Bebe Daniels was Lloyd’s first regular co-star, appearing in over 150 one- and two-reelers with the comedian between 1915 and 1919. The daughter of a theatre impresario, Daniels had first appeared on stage at ten weeks old, and at age nine had starred as Dorothy in the earliest surviving screen adaptation of The Wonderful Wizard of Oz (1910). By the time she first appeared opposite Lloyd — who was at that point a relatively inexperienced newcomer to the “flickers” — in 1915’s Giving Them Fits, Daniels was already a seasoned veteran at age 14, and in the pair’s collaborations to come her poise, professionalism, cool confidence, and talent buoyed Lloyd as he struggled with the transition from the Lonesome Luke films to the birth of the Glasses Character. In many ways, he was following her lead. 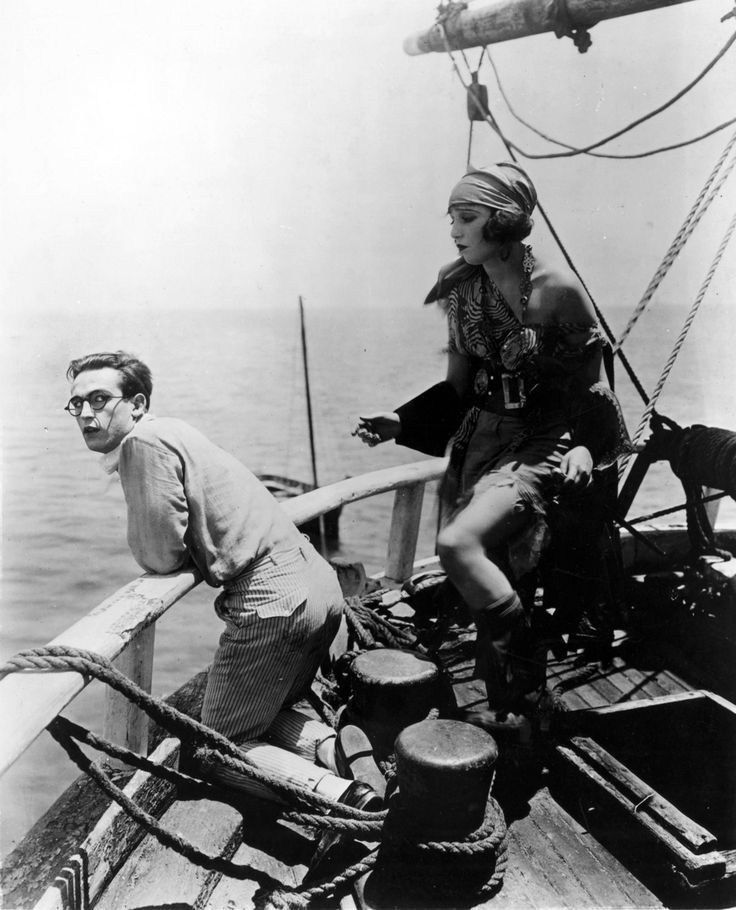 Daniels and Lloyd’s chemistry on screen (and off: they were linked romantically, much to the delight of the fan magazines) was, and still is, undeniable. In The City Slicker (1918) and Bumping into Broadway (1919), Daniels defies her prescribed status as pretty decoration and becomes instead an ideal comic foil for Lloyd, as well as providing a dreamy, amorous lightheartedness. In Captain Kidd’s Kids (1919), where she plays a female pirate who captures Lloyd’s unwary seafarer, Daniels displays her fantastic theatricality, and prefigures the flamboyant roles she would soon have a chance to play. 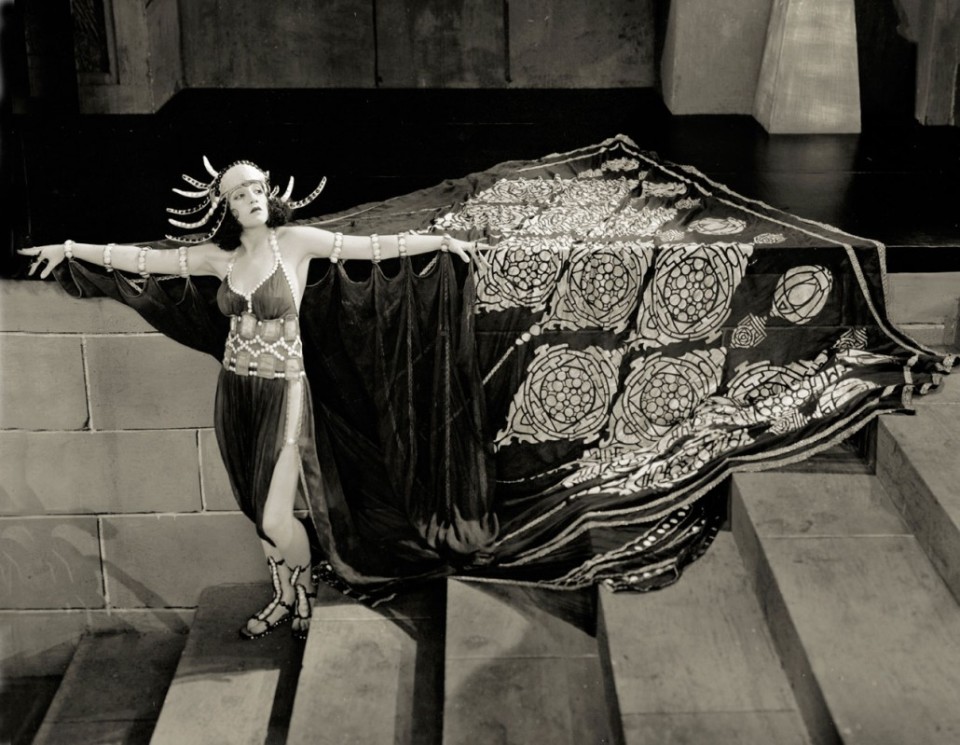 Daniels in Cecil B. DeMille’s Male and Female

As early as 1917 Daniels had caught the attention of Cecil B. DeMille, who offered her a contract. Opting to fulfill her obligation to Lloyd and producer Hal Roach, Daniels stuck with the Lloyd series until 1919, at which time she departed and made her dramatic debut for DeMille in the smash hit Male and Female. For the decade to come, Daniels was a major star in her own right, a bona fide cover girl and favourite of all the major fan magazines; she also managed to make the transition to the sound era, starring in such notable films as the first version of The Maltese Falcon in 1931, and the classic musical 42nd Street (1933). 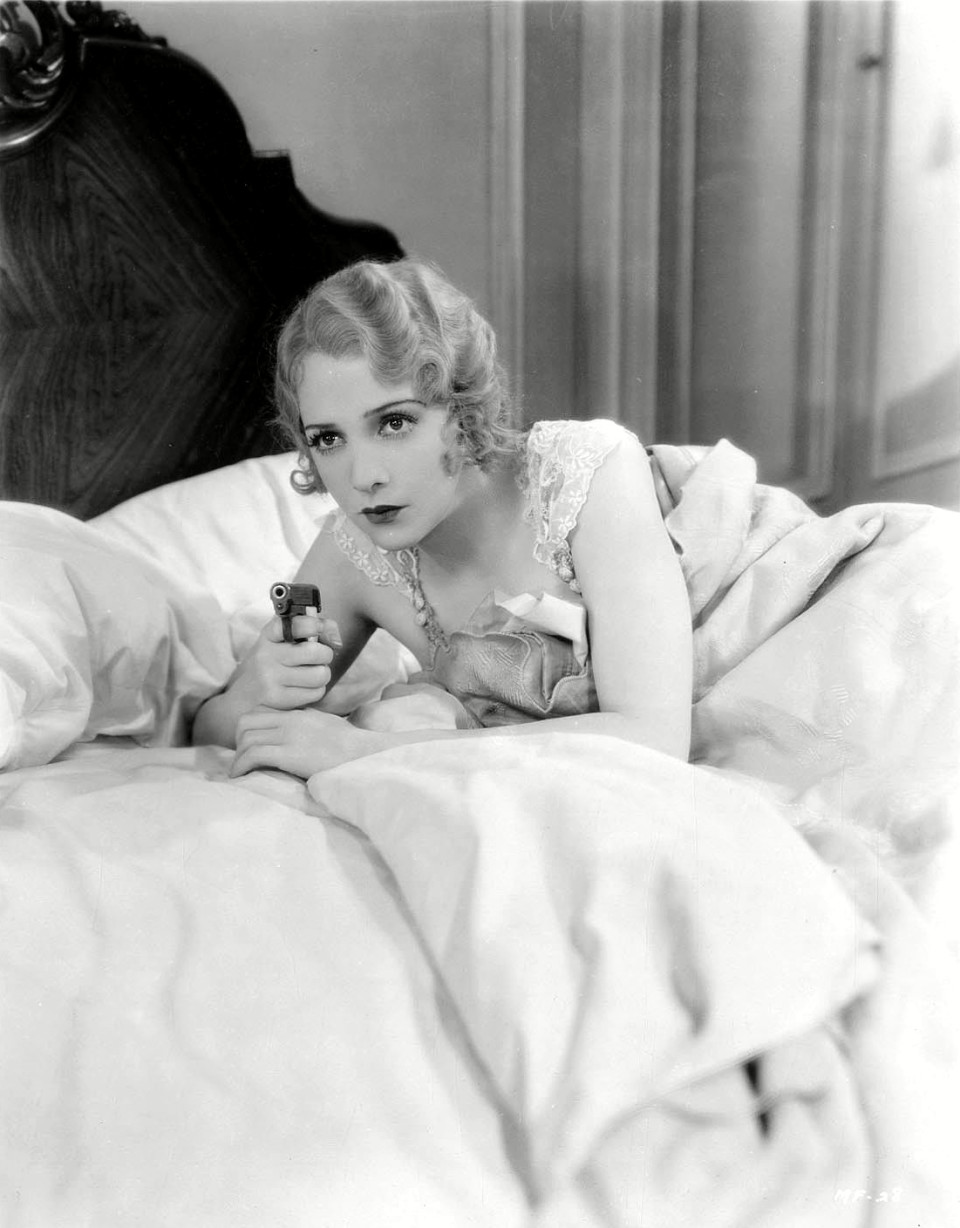 Daniels in the 1931 version of The Maltese Falcon

Lloyd reportedly wore a ring that Daniels once gave him for some 50 years. Daniels would follow Lloyd to the grave only eight days after his death in 1971, a mere four months after they had just seen each other for the first time in decades. 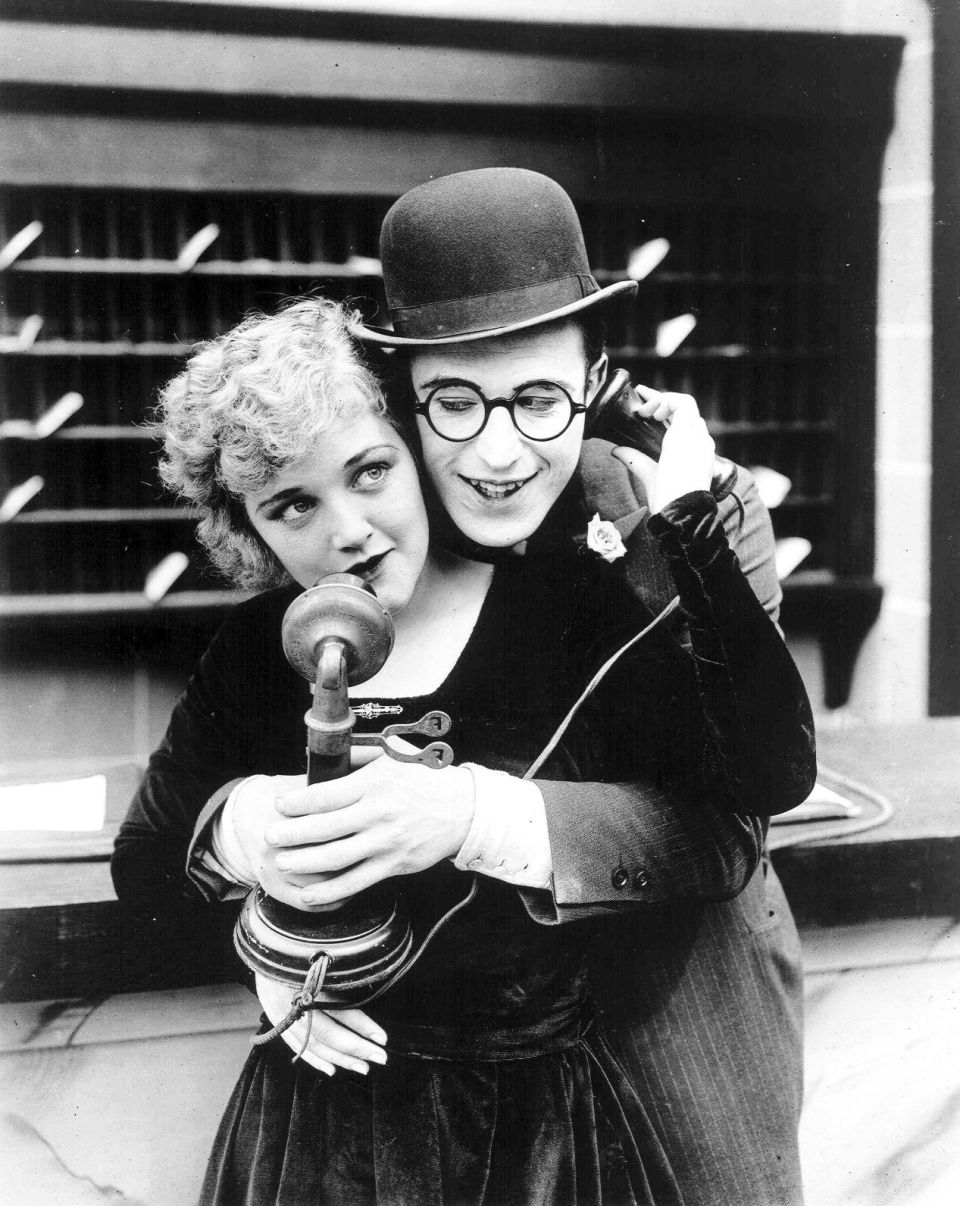 Lloyd and Mildred Davis in High and Dizzy

Knowing how important Daniels had been to the development of his career, Lloyd sought to fill the role of his onscreen paramour with a personality radically different from that of his first co-star. He soon discovered 18-year-old Mildred Davis, after Hal Roach mentioned he thought she was interesting. With her cherubic blonde curls and porcelain skin, the doll-like Davis offered a marked contrast to Daniels’ more mature looks. Where Daniels was plucky and assertive onscreen, Davis’ persona was vulnerable, a damsel in distress in most instances. 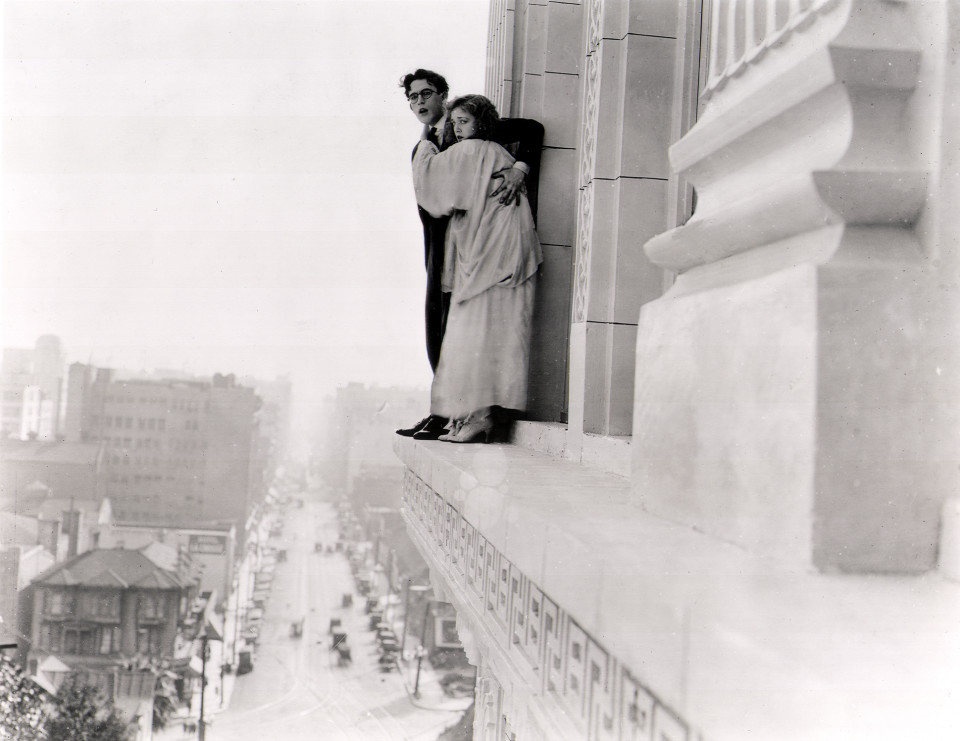 However, it soon became clear that giving Lloyd someone to “rescue” (or at the very least win over) made his films more popular. Beginning with From Hand to Mouth in 1919, Davis and Lloyd starred in 11 shorts together, as well as four features — including Safety Last! (1923), whose skyscraper-scaling centrepiece had been partially inspired by the vertiginous stuntwork on the pair’s previous collaboration High and Dizzy (1920), in which Lloyd frantically attempts to rescue Davis from her perilous sleepwalk along the edge of a high building.

Davis and Lloyd worked together through two pivotal moments in Lloyd’s career — one professional, one personal. The first was Lloyd’s transition from shorts to full-blown features with A Sailor Made Man in 1921 (the same year that Chaplin made his feature debut with The Kid). The second was the horrendous accident that almost claimed Lloyd’s life in 1919, when a “prop” bomb exploded in the comic’s hand during a publicity shoot, nearly blinding him and causing the loss of his thumb and index finger. With his full recovery in question, Lloyd feared his career was over; it was Davis’ frequent visits to him that offered consolation. 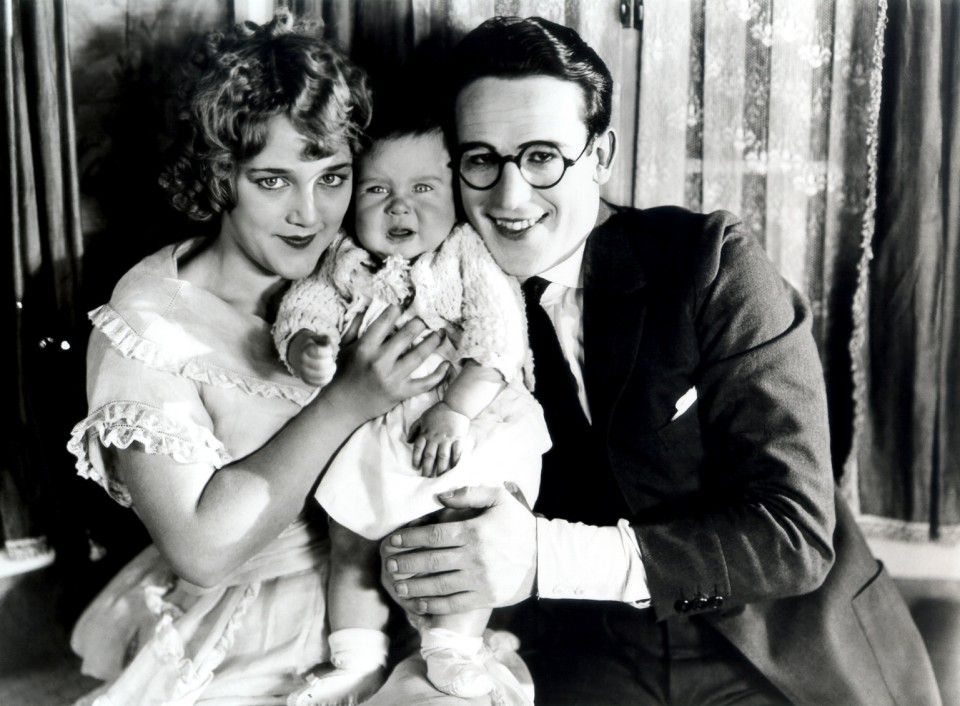 When Davis, like Daniels before her, was offered a lucrative contract at another studio, Lloyd doubled down and asked Davis to marry him; she agreed and promptly retired from film (a depressing reality of both Lloyd’s ego and expectations of career women in that era). While Lloyd’s fame and fortune continued to grow throughout the 1920s, Davis controlled the couple’s domestic sphere at their fabulous mansion Greenacres, and the two would welcome three children together. Unfortunately, bouts of loneliness, the burdens of domestic responsibility, Lloyd’s extramarital affairs, and, no doubt, the squandering of her talents led Davis down the path to alcoholism, and resultant poor health through the rest of her life. 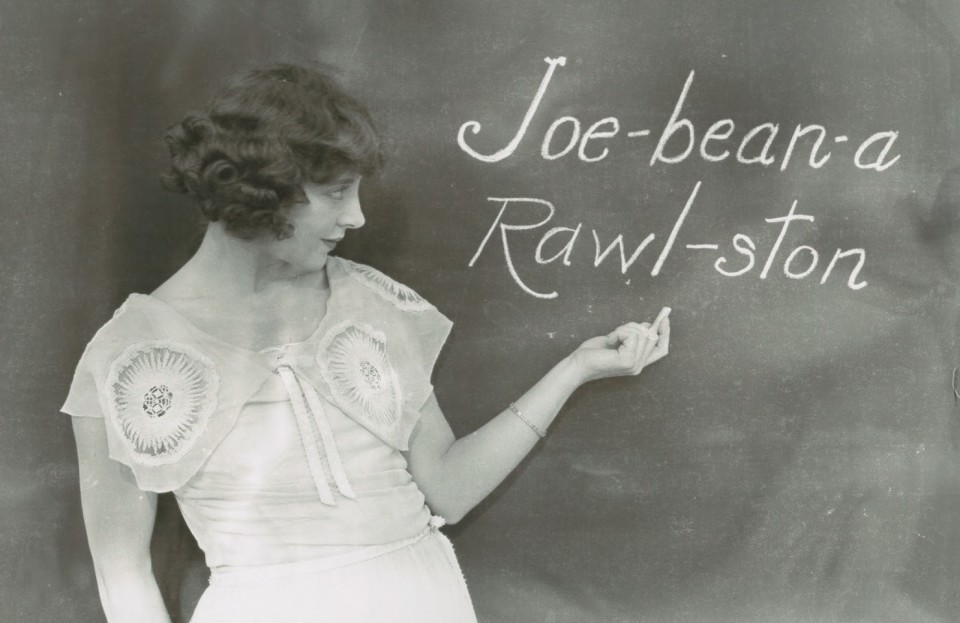 With Davis now retired — and himself having struck out as an independent producer after amicably ending his lucrative, long-term relationship with Hal Roach — Lloyd once again sought a different kind of personality for his screen partner. He soon found Jobyna Ralston, who — despite having appeared in a Max Linder short and the long-lost film debut of the Marx Brothers, Humor Risk (1921) — was the least comedic in spirit of any of Lloyd’s onscreen love interests.

Modern, fashionable, and more sensuous than Daniels’ and Davis’ Edwardian types, Ralston brought a Jazz Age ambience to Lloyd’s films that helped usher them in to the full swing of the Roaring ’20s. Even more importantly, she privileged the dramatic elements in the six Lloyd features she appeared in, helping take the films out of the realm of pure slapstick and towards the more seriocomic terrain of romantic comedy. In Ralston, Lloyd found a different kind of creative partner, and he even allowed her (in limited and strategic moments) to upstage him on screen, knowing that her dramatic skills would enhance his pictures. 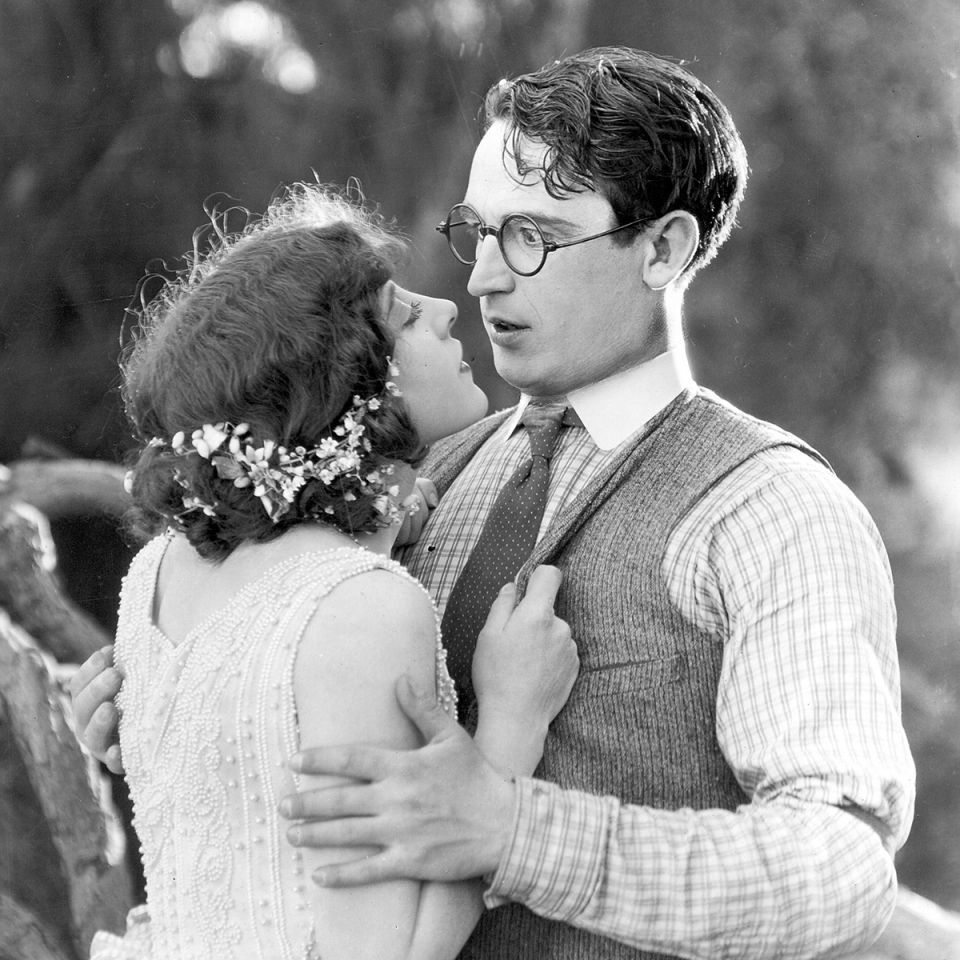 Ralston and Lloyd in Girl Shy

Ralston’s sensitivity and compassion are on full display in Girl Shy (1924), her second pairing with Lloyd (after 1923’s Why Worry?) and one of the comic’s greatest features. While Lloyd’s character — a small-town would-be Lothario who is too timid to actually approach women — is familiar from previous outings, Ralston brings a new element to Lloyd’s universe as a rich heiress who becomes smitten by the boy, despite his awkwardness and shyness. When a misunderstanding leads Lloyd to reject Ralston — a move designed to pre-empt what he believes will be his rejection by her — Ralston’s crestfallen reaction is truly heartbreaking. The emotional depth that Ralston brings to her role brings some genuine suspense to the classic chase sequence that concludes the film, as Lloyd races to prevent Ralston marrying a rich reprobate she got engaged to on the rebound. 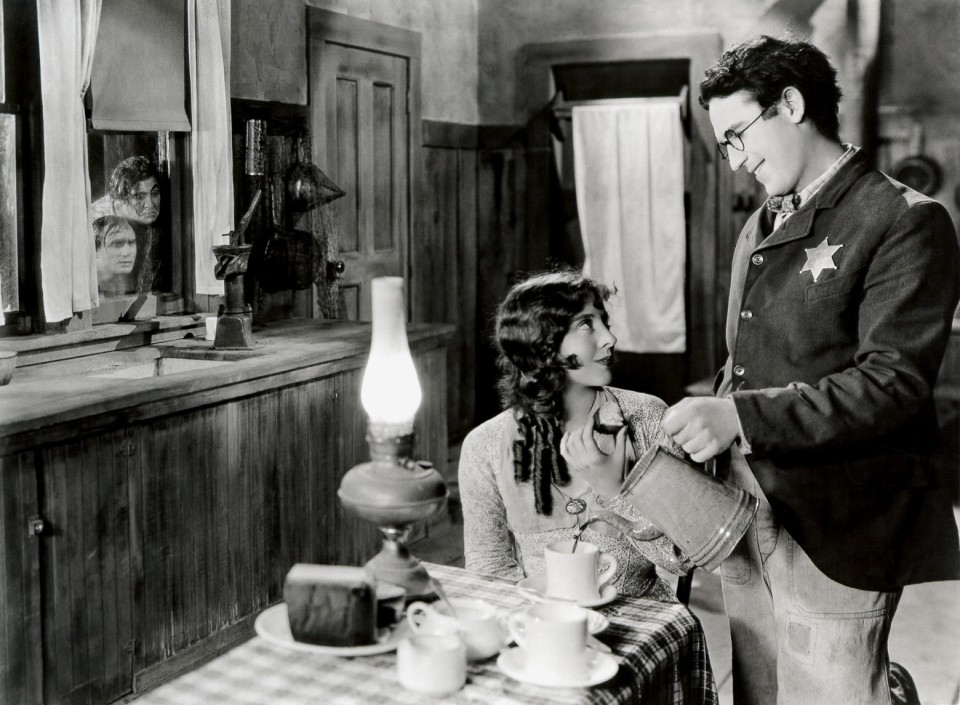 Ralston and Lloyd in The Kid Brother

Ralston subsequently co-starred in Lloyd’s greatest popular and critical success, The Freshman (1925), as well as the brilliant For Heaven’s Sake (1926) and Lloyd’s own personal favourite feature The Kid Brother (1927) until, looking for more dramatic parts, she split from Lloyd and nabbed a supporting role in William Wellman’s Wings (1927) — as well as a husband, the film’s leading man Richard Arlen. 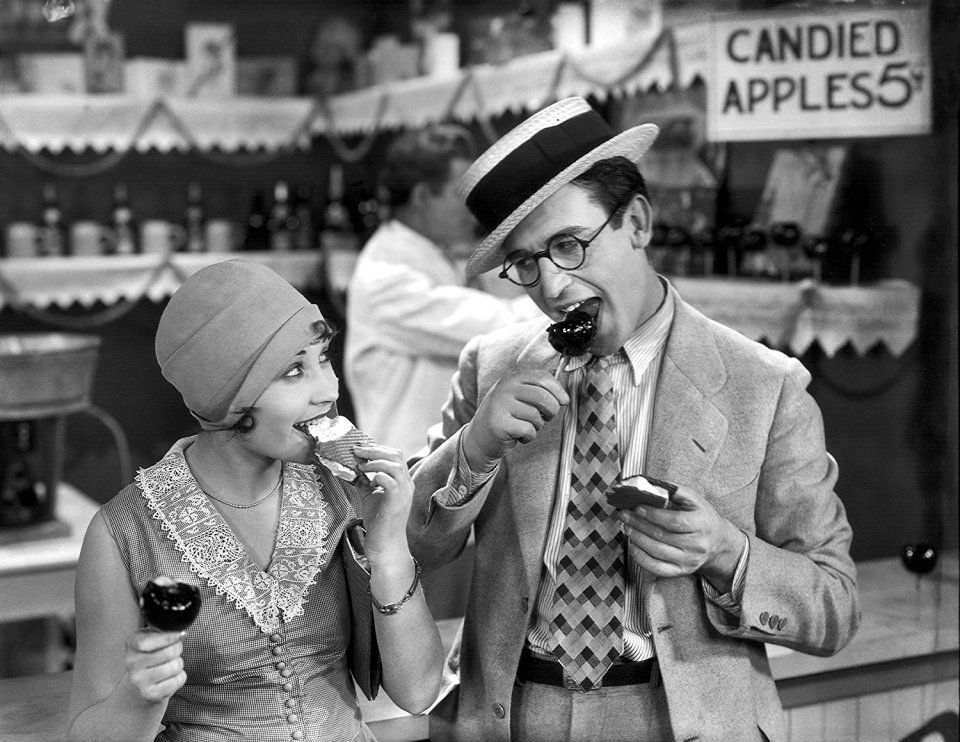 Ann Christy and Lloyd in Speedy

After Ralston’s departure, Lloyd made only one more silent feature (and arguably his masterpiece), 1928’s Speedy, in which he cast Ann Christy — who had previously worked with his comedy colleague Harry Langdon — as his lady love. While Christy brought pluck to her part and sparred well with Lloyd onscreen, her career, as with those of so many actors, fizzled out along with the silent era. As sound swept the industry, there were few opportunities left for the ladies of slapstick.

Lloyd himself managed a reasonably successful transition to the sound era, but, apart from Canadian actress Barbara Kent — who appeared with him in his first two sound features Welcome Danger (1929) and Feet First (1930) — he never again developed the kind of recurring screen partnership that he had with Daniels, Davis, or Ralston. When he retired from the screen at the end of the decade — apart from a brief attempt at a comeback with Preston Sturges’ 1947 The Sin of Harold Diddlebock (a.k.a. Mad Wednesday) — his reputation declined greatly in contrast to Chaplin and Keaton, as film critics and historians preferred the Angel and the Machine to the go-getting Everyman. Now that Lloyd has been rightfully reinstated to the comedy throne — following a decades-long process of rediscovery and appreciation spearheaded by the granddaughter he raised, Suzanne Lloyd — it’s high time that his queens take their rightful places as well.