Greek Unorthodoxy: The Killing of a Sacred Deer and the Bleeding Edge of Poster Design 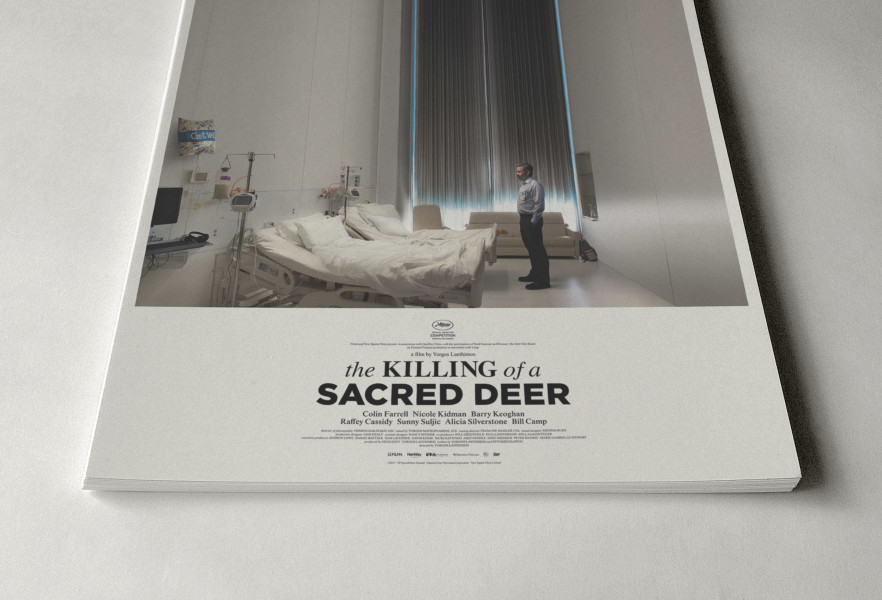 Some of the most enduring images in film history never ran through a projector, but began life as elements of promotional campaigns, and — thanks to nostalgia, notoriety, or sometimes just pure ubiquity — became iconic in their own right. Our ongoing series FilmArt looks at the advertising, posters, lobby cards and other ephemera that complement and enrich the filmgoing experience.

One of the most talked about films of the year, Yorgos Lanthimos’ The Killing of a Sacred Deer opens in wide release today after making its North American premeire at TIFF '17. The Greek auteur is no stranger to TIFF: since his solo debut Kinetta appeared in the 2005 Discovery programme, each of Lanthimos’ films has arrived in Toronto more eagerly anticipated than the last — an anticipation that is amplified by the consistently memorable, always unorthodox poster art for his films. The Killing of a Sacred Deer is no exception, offering us a bearded Colin Farrell staring sedately at a couple of hospital beds as the very substance of the world around him diffuses. 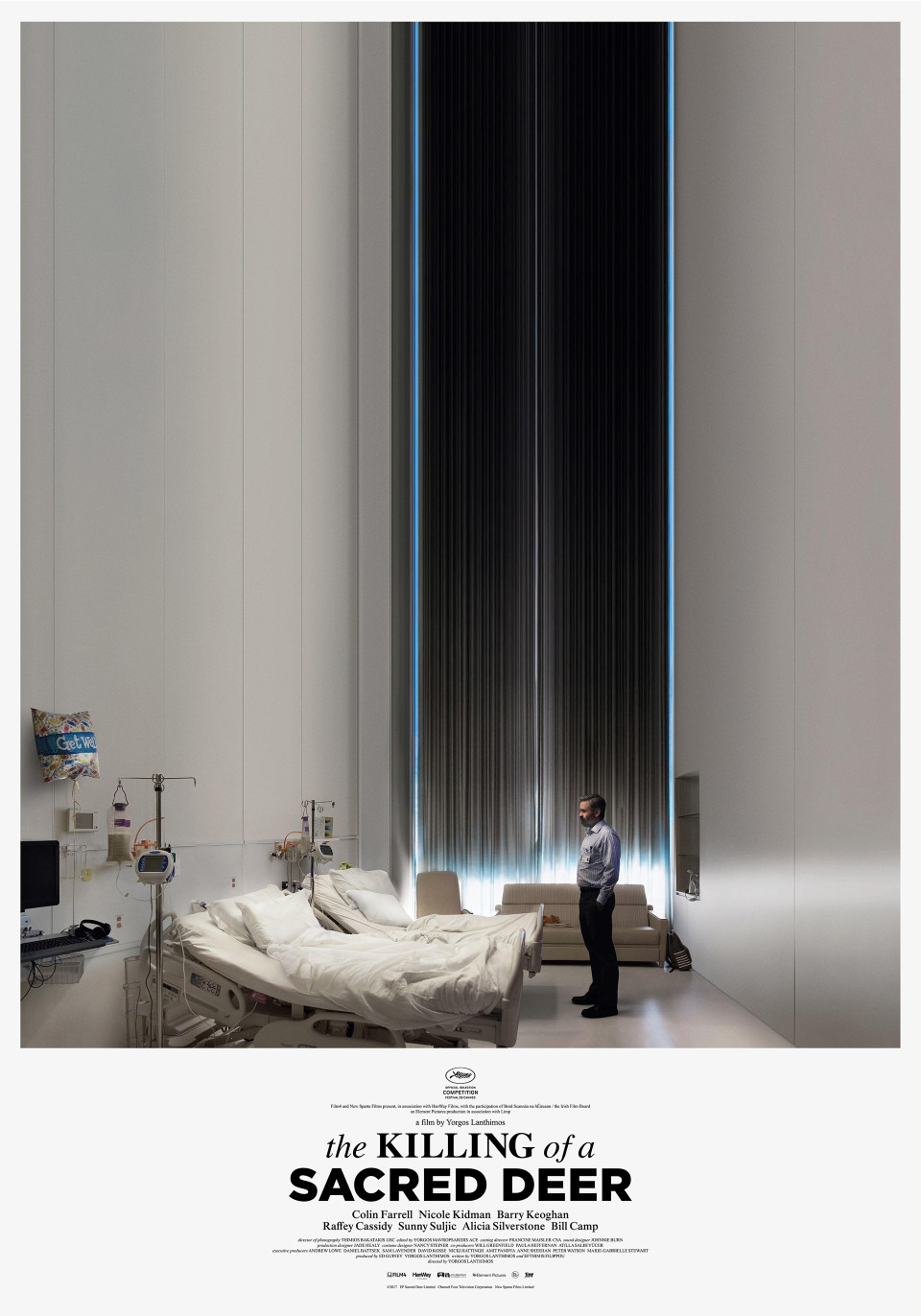 The Killing of a Sacred Deer marks the fourth collaboration between Lanthimos and graphic artist Vasilis Marmatakis, an association that has produced the best movie posters of the past decade. Since the Un Certain Regard-winning Dogtooth in 2009, Marmatakis has been responsible for translating Lanthimos' distinct vision into static artwork — perhaps most notably with his two posters for The Lobster, which appeared on countless year-end lists and took home the award for Best Poster at the 2016 UK Screen Awards.

Though his work with Lanthimos has received the most attention on the western side of the Atlantic, the Athens-born, London and Maastricht-educated artist has produced equally stunning works for some of his homeland's most exciting filmmakers, including Athina Rachel Tsangari (Chevalier) and actor-director Yorgos Zois (Interruption). 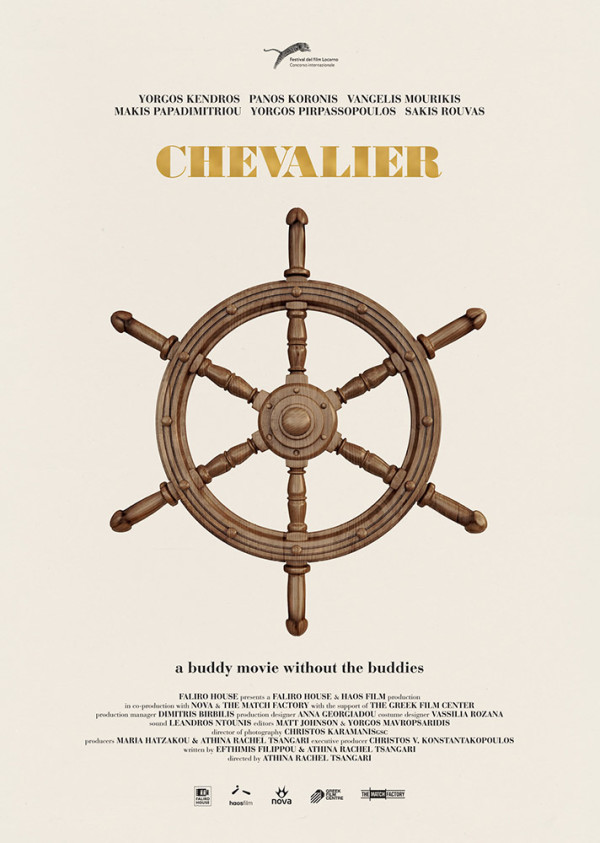 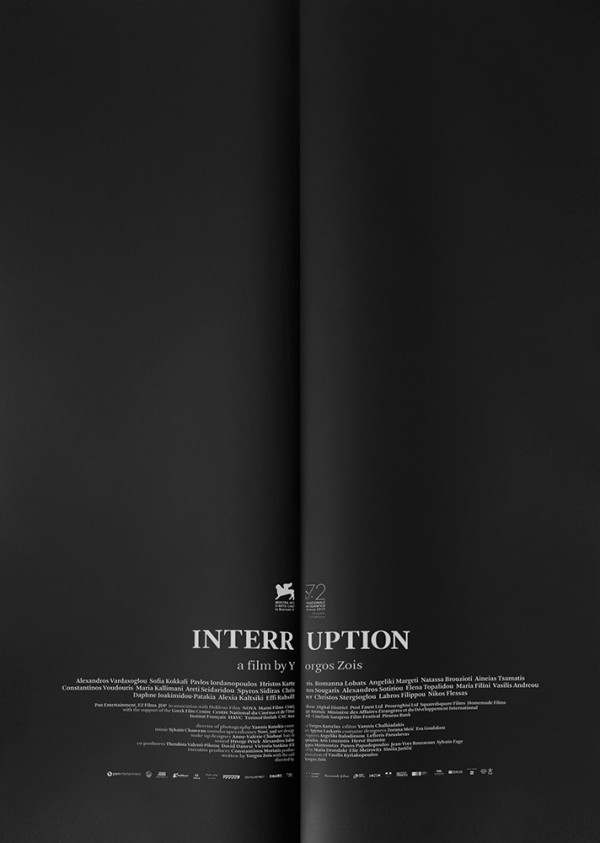 From his home in Athens, where he works as an independent graphic designer and lecturer, Marmatakis took some time to answer questions about his process, his influences, and humoured me about a Dogtooth design that isn't his creation, but is certainly a pet favourite of mine.

Most movie posters intentionally try to provoke an immediate emotional response, even if it's as simple as “that looks exciting,” or “I love that actor,” but yours tend to represent the spirit or tenor of the film itself. In an interview with Creative Review, you mention that you had only read the script for The Lobster before you began work on the film; you also referenced having done the same on Dogtooth and Alps. Do you think this accounts for how closely your work ties to the films, conceptually? Since you're initially approaching it from a place of ideas, rather than a visual one?

I always read the script beforehand for every film I work on. I did visit the set during the filming of Dogtooth, Alps and Chevalier because they were shot in Greece, but The Lobster was shot in Ireland and The Killing of a Sacred Deer in Cincinnati, and at the time [it] was impossible to travel there. Also, I always talk with the director and the screenwriter and usually see an edit of the film before it’s finalized. While at this process I do various tryouts visualizing concepts that run throughout the film.

You've said that your posters for The Lobster were originally a series of five posters, cut down to two. Were those three additional characters, or three other concepts for the poster? 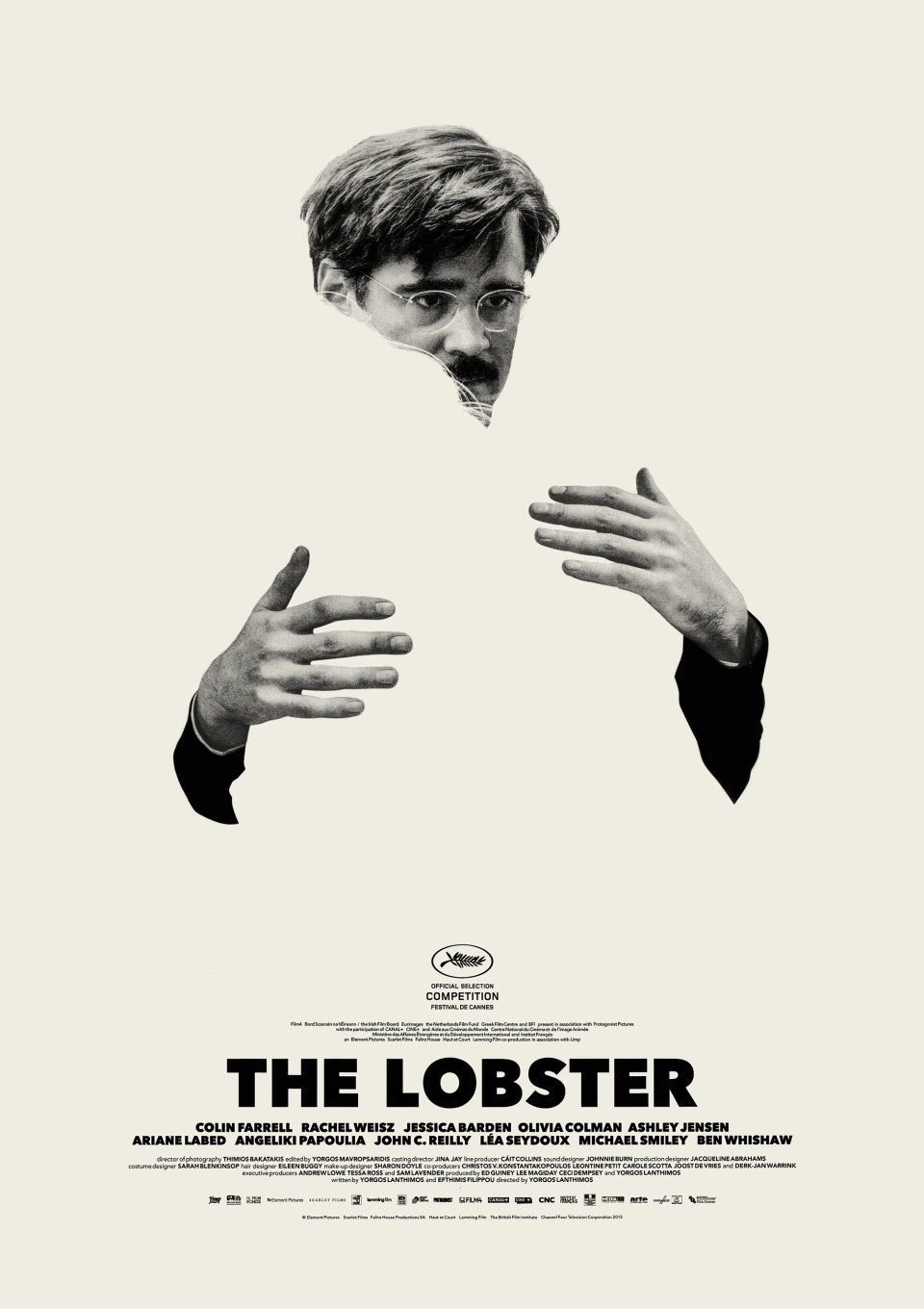 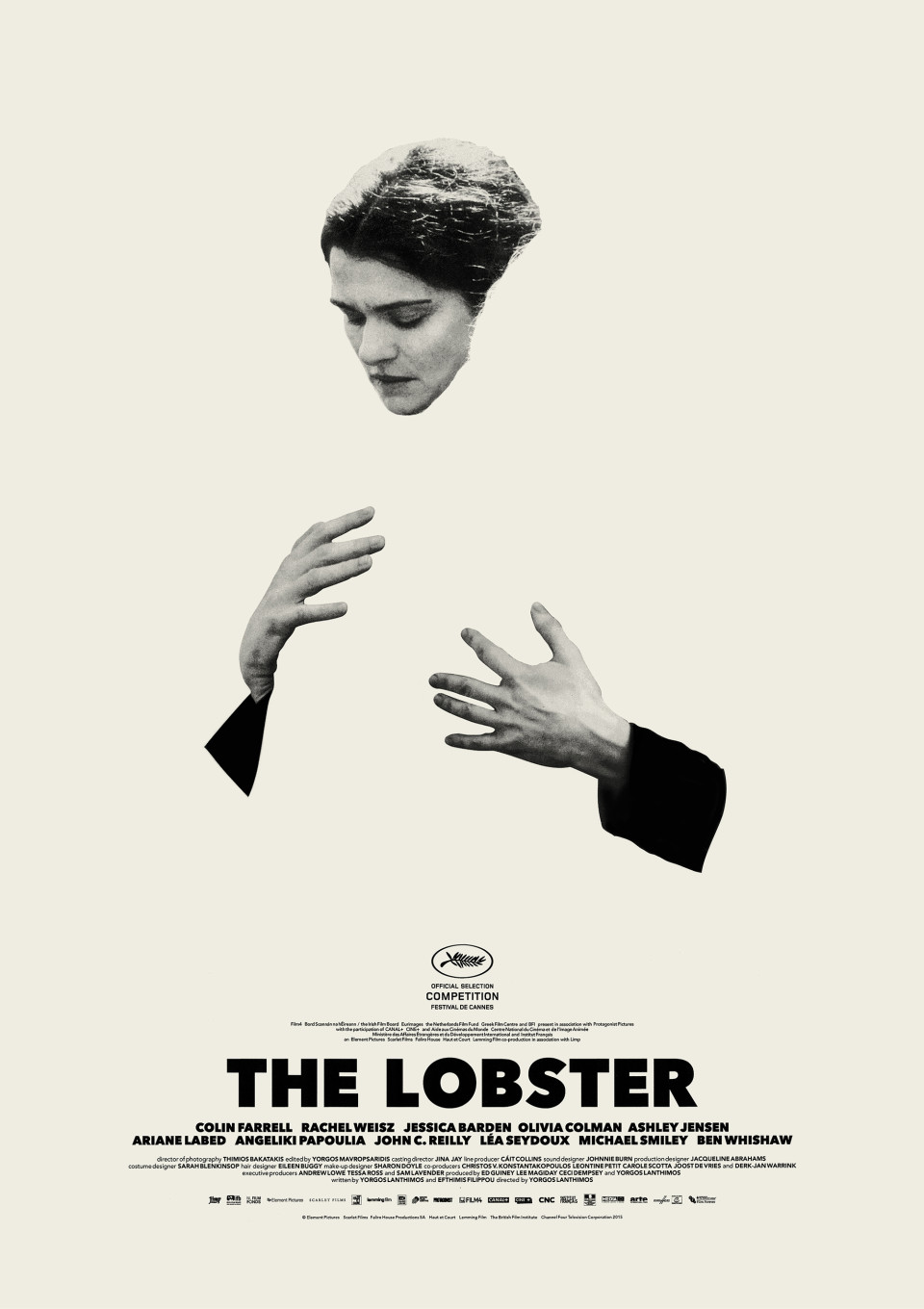 The main aim on all the posters was to graphically visualize “solitude” in opposition with the need to be “with” someone, and the implications that such notions convey. On the two posters, Colin Farrell and Rachel Weisz embrace someone or something. The other might not even be there. During that action of embrace, they might be disappearing, too. I tried to visually imply “incompleteness,” the feeling of void and the resulting agony.

Considering how important that idea of “incompleteness” is to your Lobster artwork, have you seen the posters where the distributor has combined both posters onto one sheet?

I have seen them, and always wonder: if Colin and Rachel are so lonely, why don’t they just hug each other?

Going back to when you first worked with Yorgos Lanthimos on Dogtooth, did you look at the posters for his previous films, such as the one for Kinetta?

Not as part of [my] research. I just remember seeing the poster of Kinetta framed at a friend’s studio. 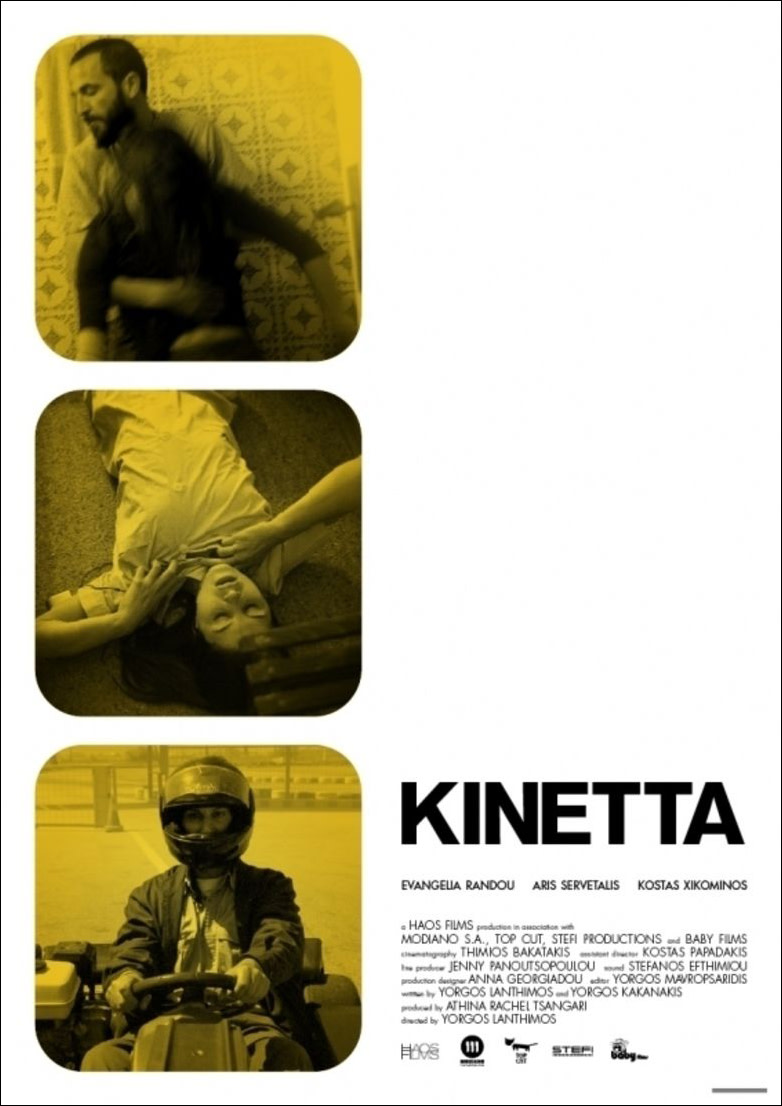 Many of the international posters for Dogtooth tapped into either the emotion or peculiarities of the film, but your original design doesn't do either. It's more cryptic.

It was designed in a way so as not to be descriptive or emotionally directive. It consists of a diagram representing sound distortion creating two choreographic spaces: inside/outside. Three lines, of blue, red, and yellow, represent the kids of the story. They begin their course from a common starting point, gradually going off into different directions until they meet again. 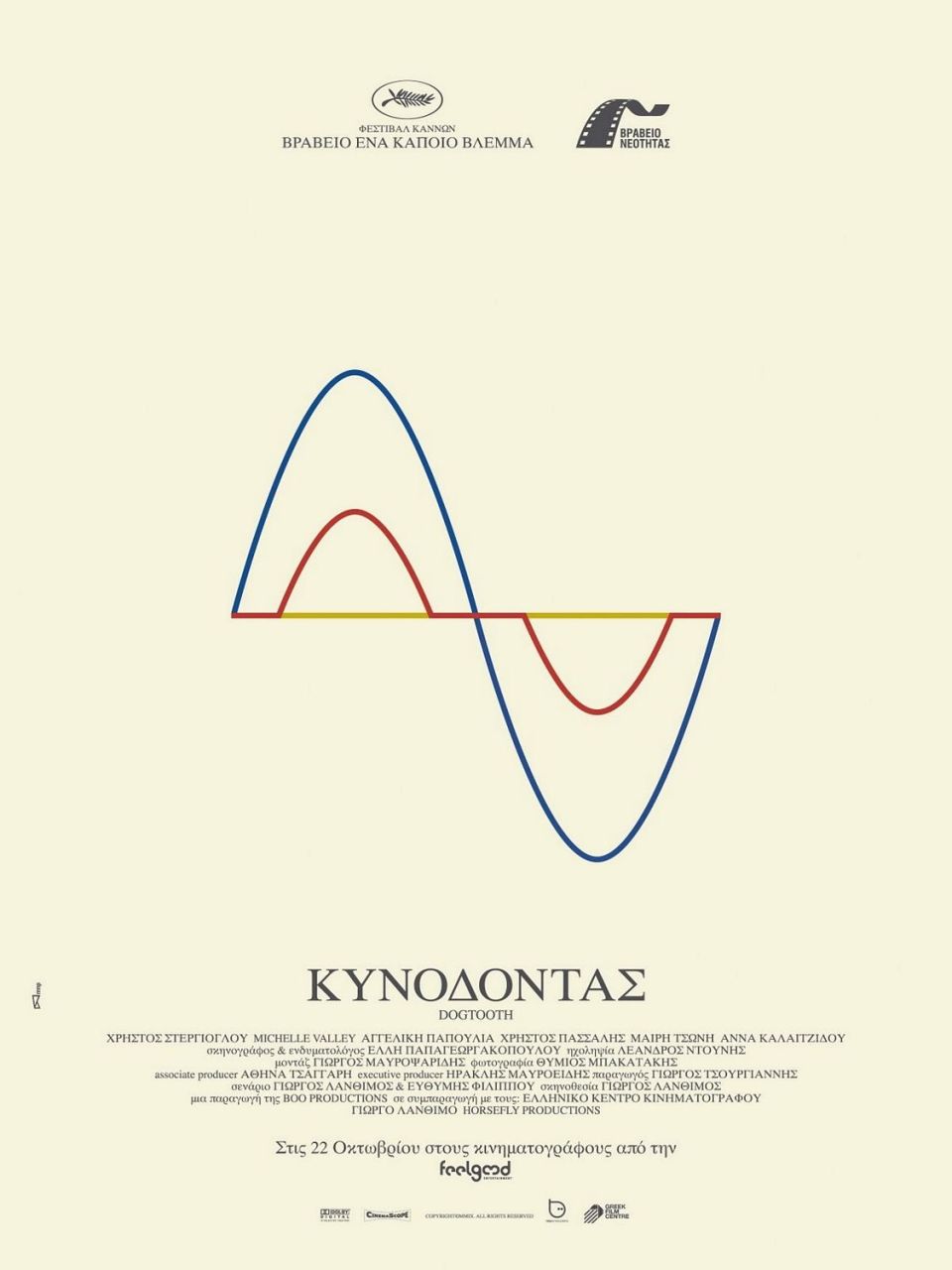 I'll be honest, I always liked the poster without fully understanding that. When Dogtooth came out, I was in North America, so the first poster I saw was the Kino International poster. That poster provoked a visceral reaction, but later, when I saw your original poster, I felt that it better captured the spirit of the film. 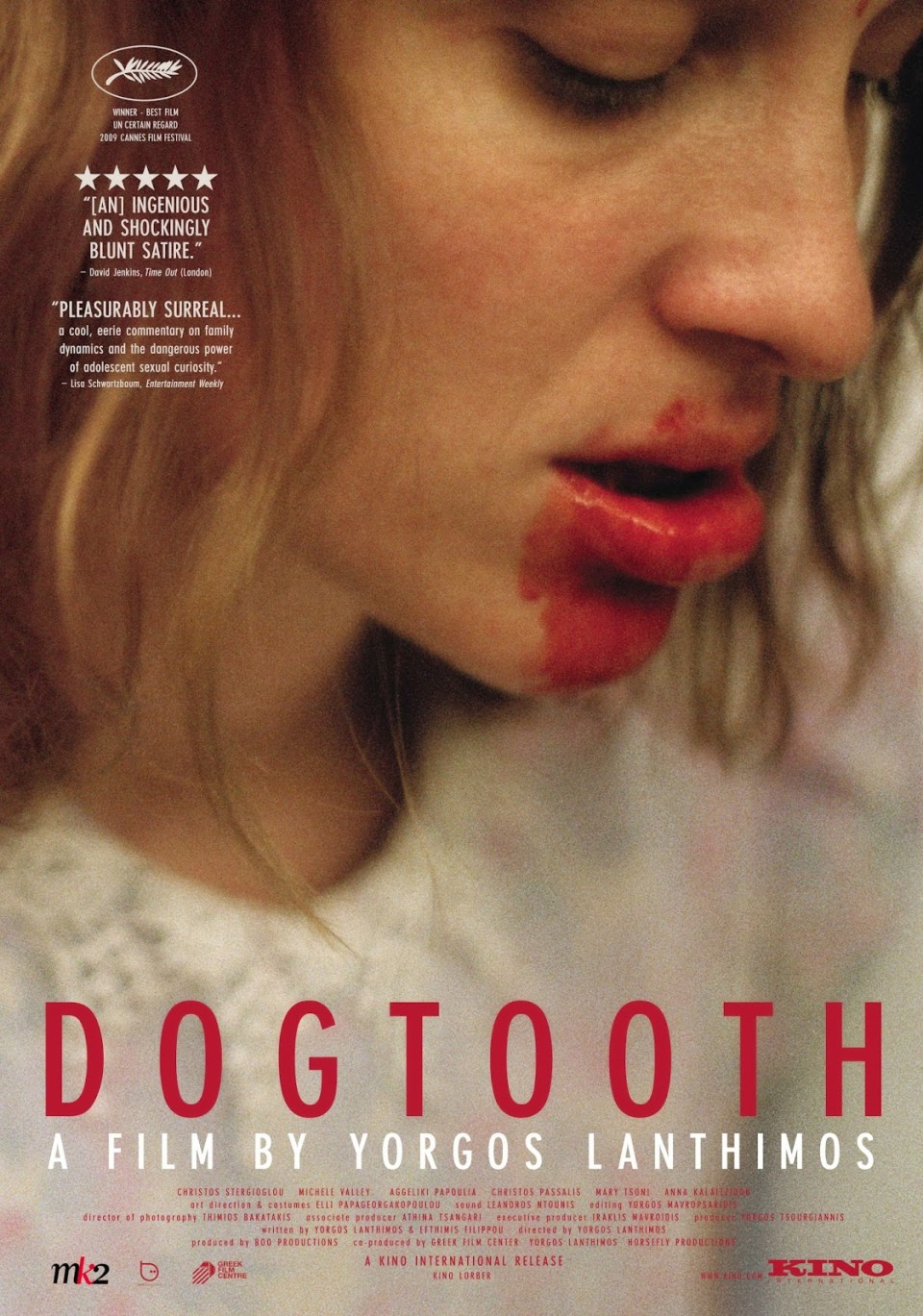 Have you seen this German DVD for Dogtooth? It might be the only one that rivals yours...

Very striking. I quite like the way the Palme d’Or is placed within the "O." 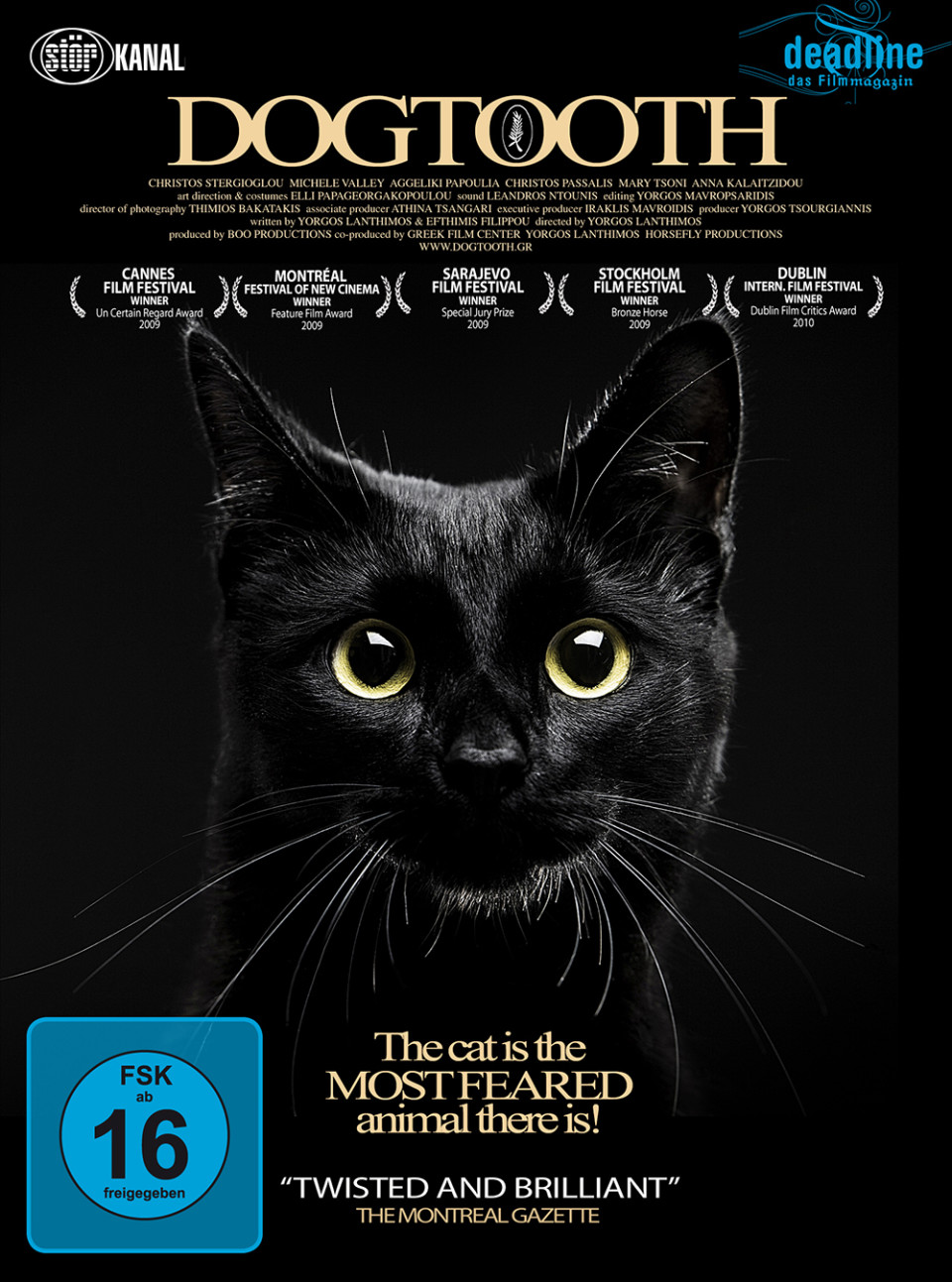 For Dogtooth, many countries had their own poster for the film. Surprisingly, many of them captured the tone of the film, which in my experience is certainly quite rare for international posters.

The Dogtooth poster was designed for the Cannes Film Festival, but Greece turned out to be the only country that kept the original design. Most of the distributors around the world did their own posters, some of them — in my opinion — not depicting the film. 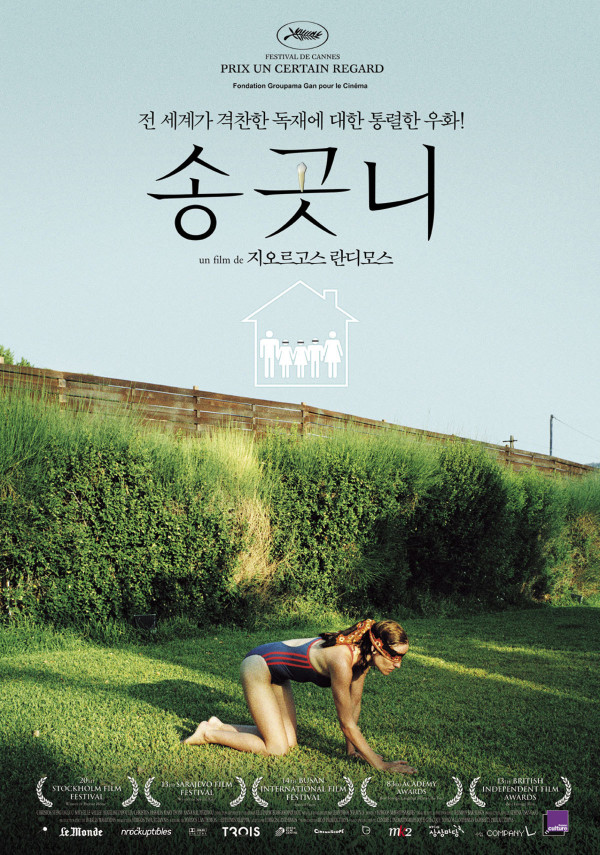 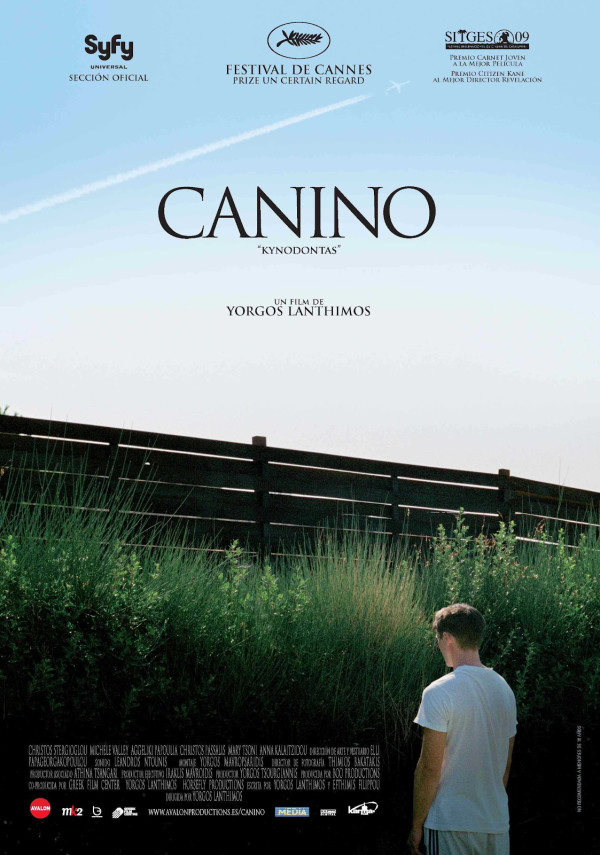 But for Alps, almost everywhere seemed to utilize your design. Do you have a theory as to why that was? Do you think there is something fundamentally different about the two posters?

The Alps poster was utilized because in a way it’s more accessible than the Dogtooth poster. Although black and white/photocopy-like, it's funnier, it tells a story, there’s the actors. 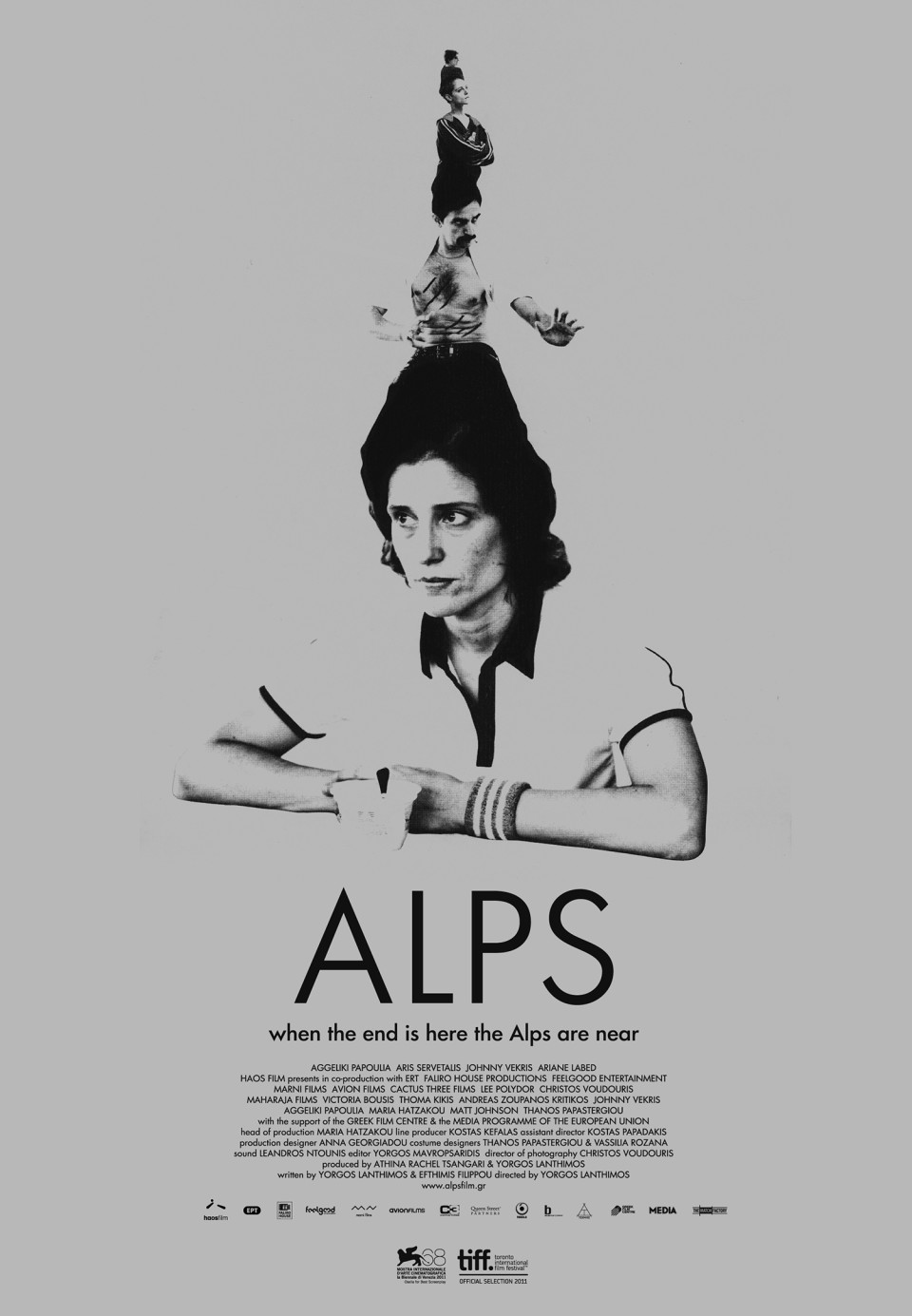 In an interview with The Criterion Collection, Lanthimos references Hans Hillmann as a “graphic touchstone” for him. They cite a few examples of his work that may have influenced The Lobster. Do the filmmakers usually suggest any visuals or ideas to you?

I always ask from directors to send me visual references before I start working to make sure we are on the same path. I have never been suggested specific visual ideas from any of the directors I have worked with so far. 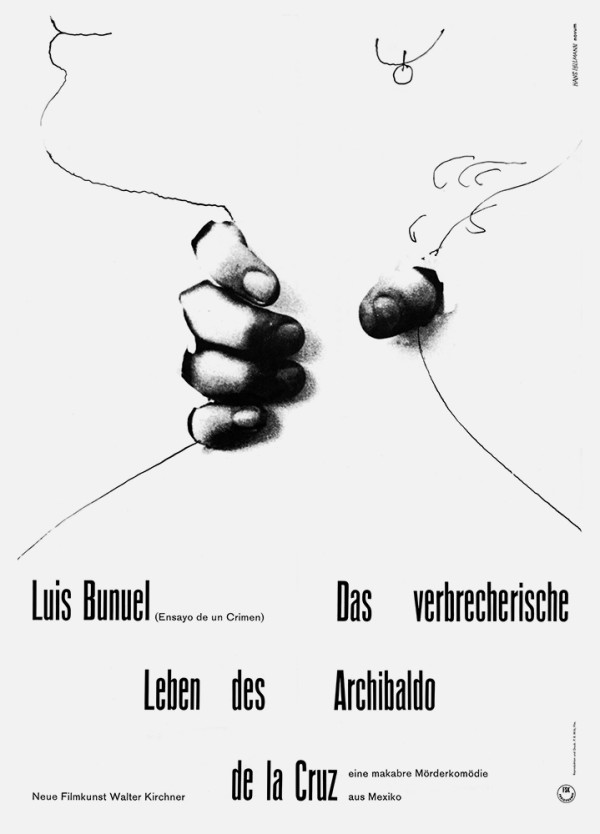 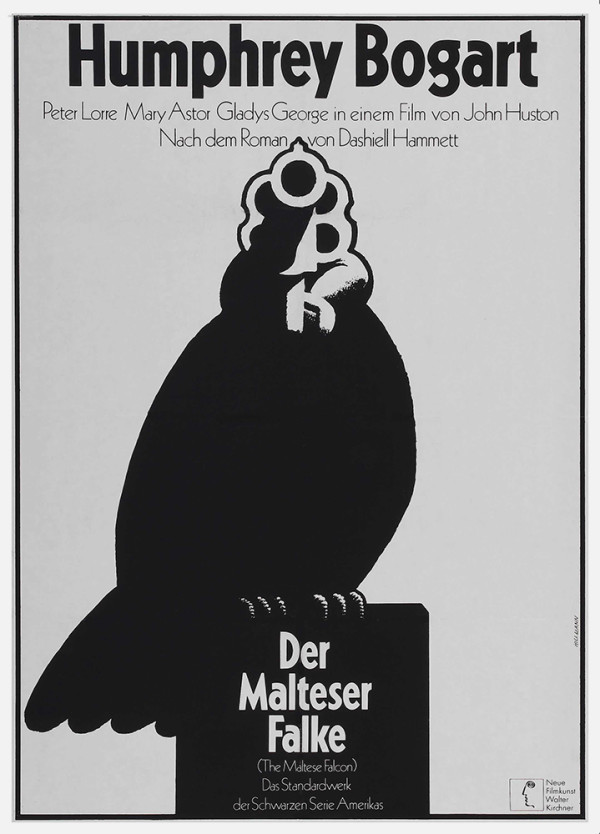 I'm always curious about this: what sorts of visual inspiration do you keep around your workspace?

The only visual element is a framed poster on the wall from a festival called Rock in Athens that took place in 1985. [Ed. note: Rock in Athens, headlined by The Clash and featuring The Cure, Depeche Mode and Nina Hagen, was one of Greece's first rock festivals, staged almost two decades after a violent 1967 Rolling Stones gig in the weeks leading up to the assumption of power by the military junta that ruled Greece until 1974.] 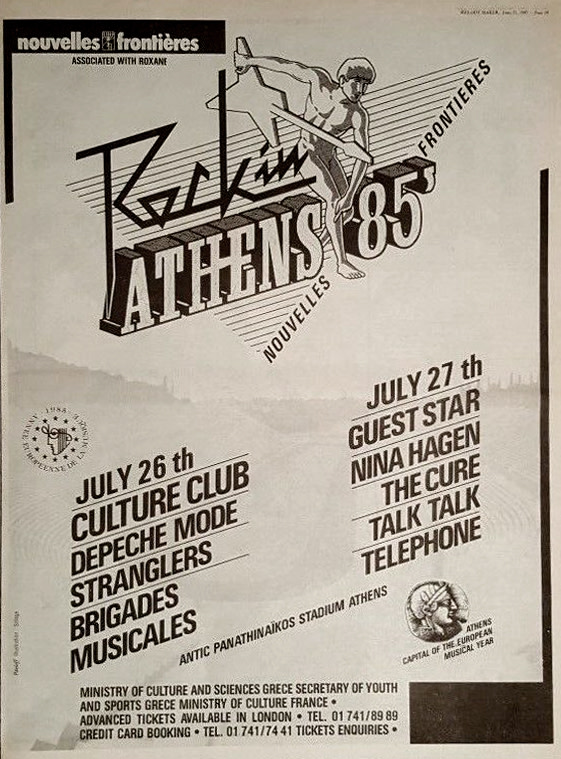 In the past, you've mentioned Josef Müller-Brockmann as an influence. You can definitely see a link between his work and yours, especially typographically. But are there any movie posters that have influenced you at all, or perhaps just something you like?

There are designers I love, like Josef Müller-Brockmann and Hans Hillman that you have already mentioned, plus loads of others, but I guess my influences — although manifested as “applied art” — derive also from fine art and music practices. 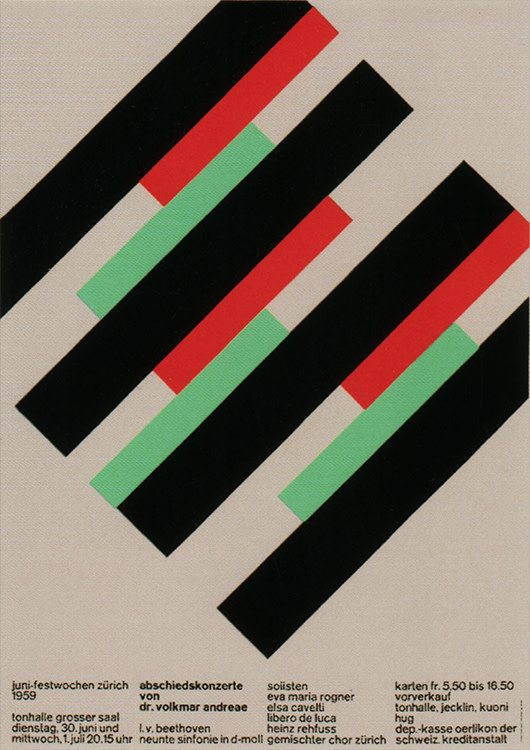 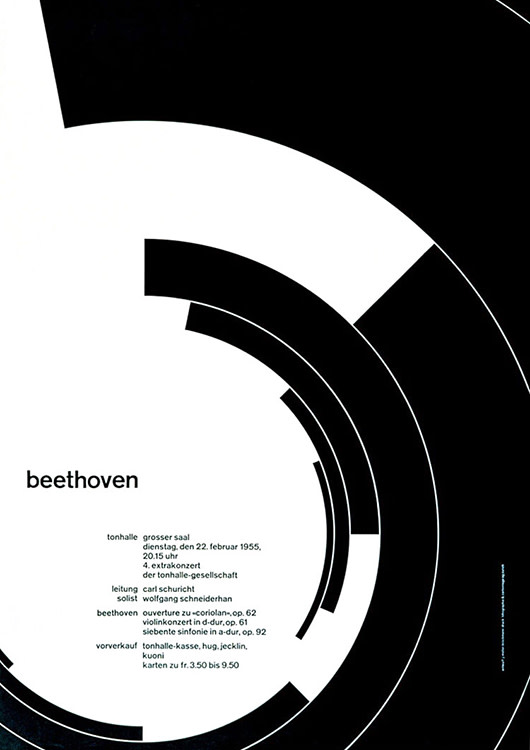 We recently ran a piece about the tension between accurately representing a film and the practical concerns of selling a movie by using a celebrity's image. The Lobster and The Killing of a Sacred Deer both feature big stars. Was there any pressure to spotlight these actors or trade on their image?

We had discussed that preferably they should appear somehow on the poster, but I had the freedom to propose anything I thought was suitable, even just typographical posters. It’s quite brave that the chosen festival poster of The Killing of a Sacred Deer depicts just a tiny Colin Farell, without Nicole Kidman.

Considering how well-received the Lobster poster was, have you been approached to do more?

I have been approached to work on various films and TV productions, but it’s always [a] matter of timing. I am not running a studio with other people — it’s just me — and since I am also working on a series of other design projects too, I always make sure to allocate each project enough time. That limits severely the amount of projects I can take on. 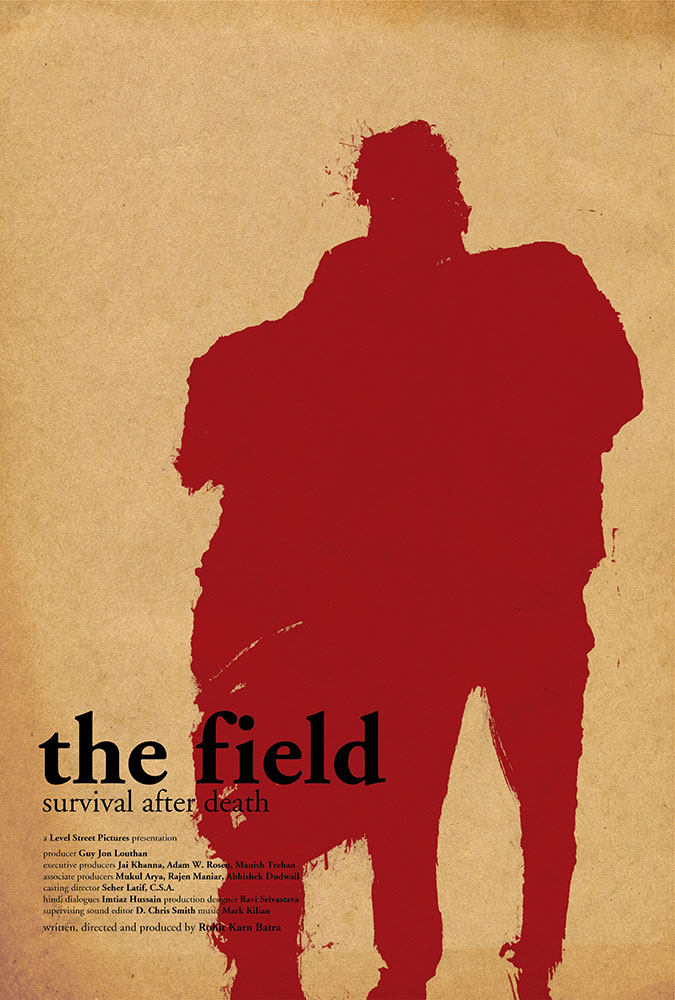 Are you working on anything now?

I have a a series of projects lined up till spring, including a publication, a logo, a record cover, the poster for The Favourite (Yorgos Lanthimos' next film), and I am also teaching.

Pedro Almodóvar’s posters are as sumptuous as his films