The Invention of Joan Crawford 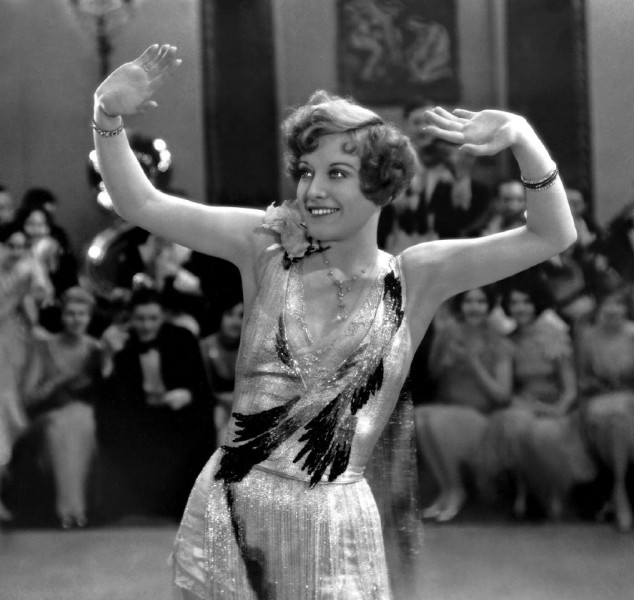 “Joan Crawford is doubtless the best example of the flapper, the girl you see in smart night clubs, gowned to the apex of sophistication, toying iced glasses with a remote, faintly bitter expression, dancing deliciously, laughing a great deal, with wide, hurt eyes. Young things with a talent for living.” —F. Scott Fitzgerald

Beyond her talent for living, Joan Crawford displayed a talent for reinvention throughout her five-decade screen career, which allowed her to remain relevant well beyond the usual age that marked a Hollywood actress’ forced retirement. But while the story of her post-“box-office poison” renaissance (and Oscar win) with Mildred Pierce is well-known — as is her late-career “hagsploitation” makeover with What Ever Happened to Baby Jane? — Crawford’s initial rise to fame in the silent era remains comparatively neglected in accounts of her career.

Before she won audiences’ hearts in the 1930s with her string of roles as hard-luck but dauntless working girls, Crawford established herself as the epitome of the Jazz Age flapper with her star-making turn in the 1928 Our Dancing Daughters, the film that elicited the Fitzgeraldian tribute above. While other actresses had previously been identified with this quintessential 1920s type — including Olive Thomas (who starred in The Flapper in 1920 and tragically died that same year of mercury poisoning), Clara Bow, and Colleen Moore — Crawford’s performance as the good-hearted good-time girl in Daughters perfected the persona just as the era was reaching its end. Fittingly, however, Crawford achieved this image of carefree, effortless sophistication through the same way she accomplished everything in her life: hard work. This first invention of Joan Crawford was the result of years and years of striving by a young woman who had faced a lifetime’s worth of labour by the time she became a star.

Born Lucille Fay LeSueur in San Antonio, Texas in 1904 (not 1906 or 1908, as she often fibbed), the future Joan Crawford experienced an unstable childhood, with her father abandoning the family soon after she was born. Her mother remarried, and Lucille (nicknamed “Billie” by the family) grew up assuming her stepfather, who managed an opera house in Oklahoma, was her real father. From a young age, Lucille was obsessed with the stage, and drunk in performances by such legendary stars as the Canadian-born vaudeville queen Eva Tanguay and the great dancer Anna Pavlova. But for the most part, Lucille was forced to work a gruelling schedule of domestic servitude to support the family. According to many accounts, her stepfather sexually abused her from the age of eleven until the time she was shipped off to a Catholic boarding school as a “working student,” performing domestic chores at the school in exchange for her tuition. Lucille’s ambition to become a dancer significantly outweighed her academic performance, and at the age of 18, following a brief stint at college, she left to join a travelling dance troupe. 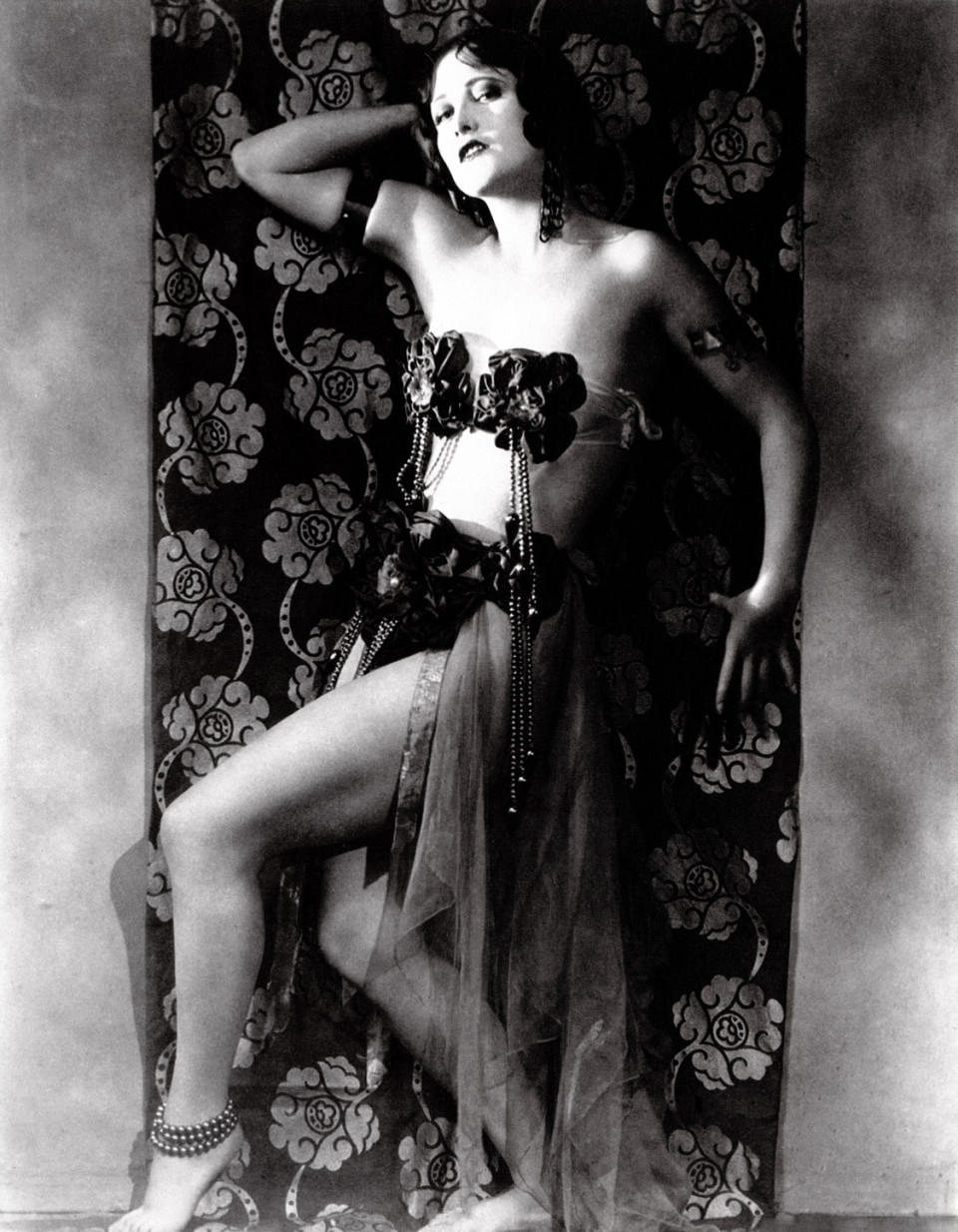 After working in a number of notable chorus lines, Lucille was spotted during a Detroit performance by New York theatre impresario Jacob Shubert, who brought her to Broadway in 1924 to join his revue at the Winter Garden Theater. Interested in breaking into motion pictures, Lucille did a screen test that was sent to MGM producer Harry Rapf. Granted a spot on the studio roster, Lucille had an exceedingly busy 1925: after making her screen debut as Norma Shearer’s body double in director Monta Bell’s Lady of the Night, she subsequently made uncredited appearances in Erich von Stroheim’s The Merry Widow, King Vidor’s Proud Flesh and The Big Parade, Fred Niblo’s Ben-Hur, and Hobart Henley’s A Slave of Fashion. She also appeared in an MGM fashion promo in which she modelled the designs of the famed Russian-born French artist Erté.

While Lucille scored a screen credit for Bell’s Pretty Ladies, the studio quickly became determined that she change her name after a publicist opined that her surname had an unfortunate resemblance to the word “sewer.” Famously, MGM had the fan magazine Movie Weekly hold a contest to rebrand their burgeoning starlet by offering contestants $1,000 if they successfully selected a more regal and becoming name for her. 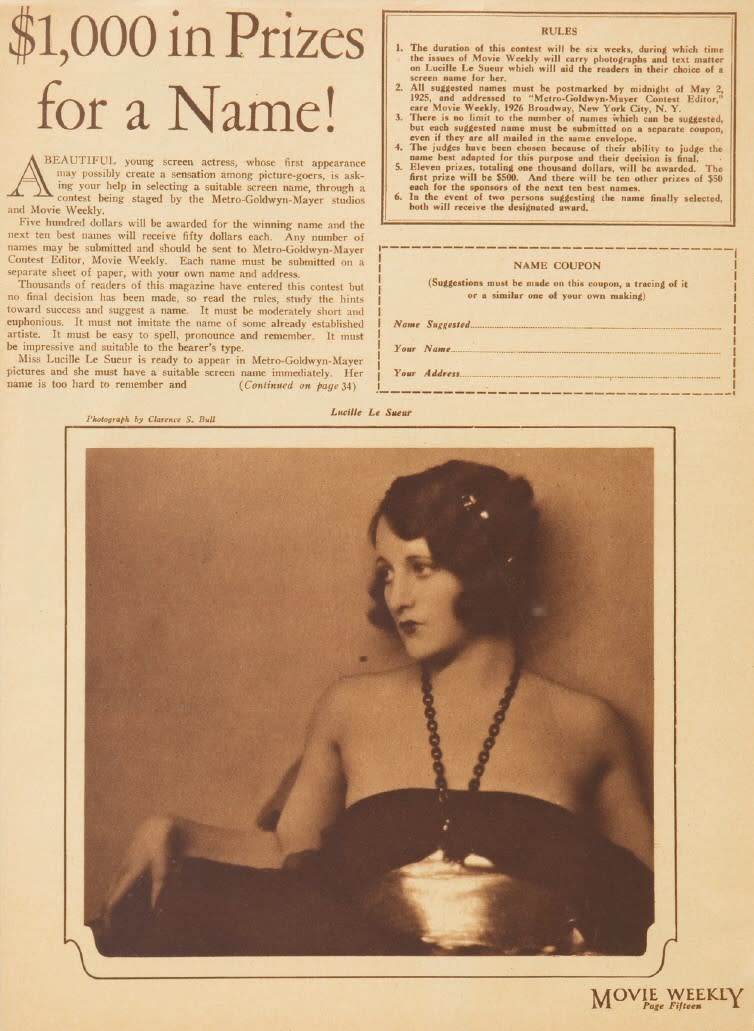 Although Lucille instantly disliked the winning entry of “Joan Crawford” — finding it too reminiscent of “crawfish,” a Southern dish she knew all too well — she duly made her first appearance under her new moniker that same year, appearing with child star Jackie Coogan in Old Clothes and then landing her biggest role yet as the second-named member of the chorus-girl title trio in Sally, Irene and Mary, directed by Edmund Goulding (with whom Crawford would work again on the smash hit Grand Hotel). 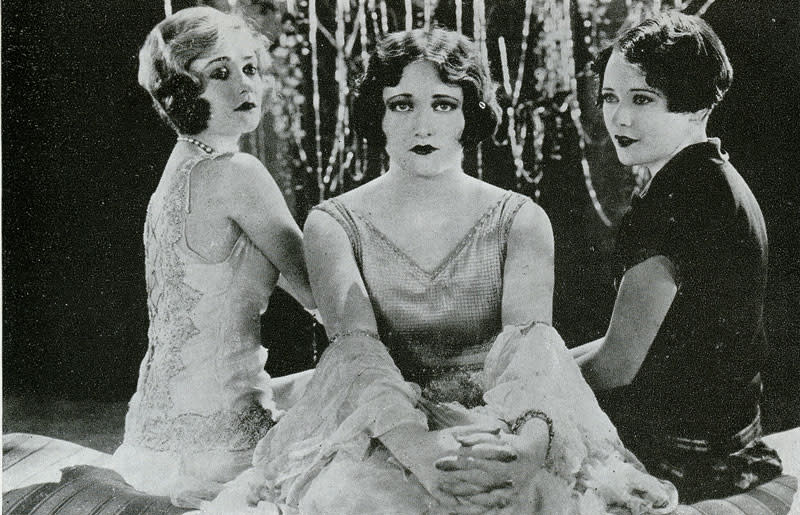 After merely a year on screen, Crawford was becoming a hot commodity in the fan magazines and dailies, embodying the “modern maiden” look with her bobbed hair, overdrawn lips, and ability to pull off the requisite flapper short skirt. After playing the female lead in three films in 1926 — Tramp, Tramp, Tramp opposite comedy star Harry Langdon, The Boob for William Wellman, and Paris for Goulding — Crawford appeared in one of her most notable silents when she was cast in Tod Browning’s bizarre tour de force The Unknown (1927) alongside top star Lon Chaney. In a characteristically gruesome Browning-Chaney scenario, the “Man of a Thousand Faces” plays a fugitive who has disguised himself by concealing his arms and billing himself as a carnival performer, “Alonzo the Armless,” who throws knives and fires rifles with his dexterous feet. Crawford plays his assistant Nanon, with who Alonzo is hopelessly in love — and, as a sign of his devotion, he eventually amputates his arms for real in order to win her favour. (Yes, this is the plot.) 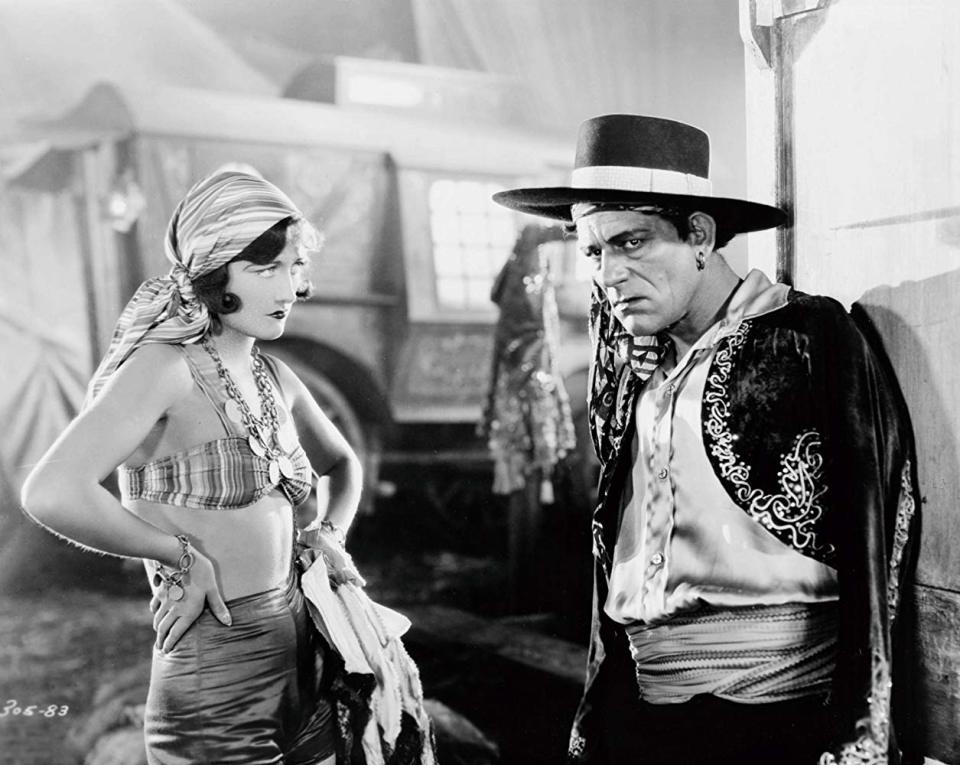 Crawford and Lon Chaney in The Unknown

After co-starring with such major male stars of the era as William Haines and Ramon Novarro, in 1928 Crawford entered the Hollywood pantheon herself in her role as Diana Medford, a.k.a. “Dangerous Diana,” in Our Dancing Daughters. Dancing the Charleston until dawn, toying with her many male suitors and laughing at her wealthy parents’ conservative outlook, Crawford’s Diana is the very picture of the loose-living Jazz Age party girl — though as the plot goes on to reveal, beneath her wild-child image there is a heart of gold and a sweetly virtuous nature that stands in stark contrast to the scheming treachery of her deceptively cherubic rival (Anita Page). 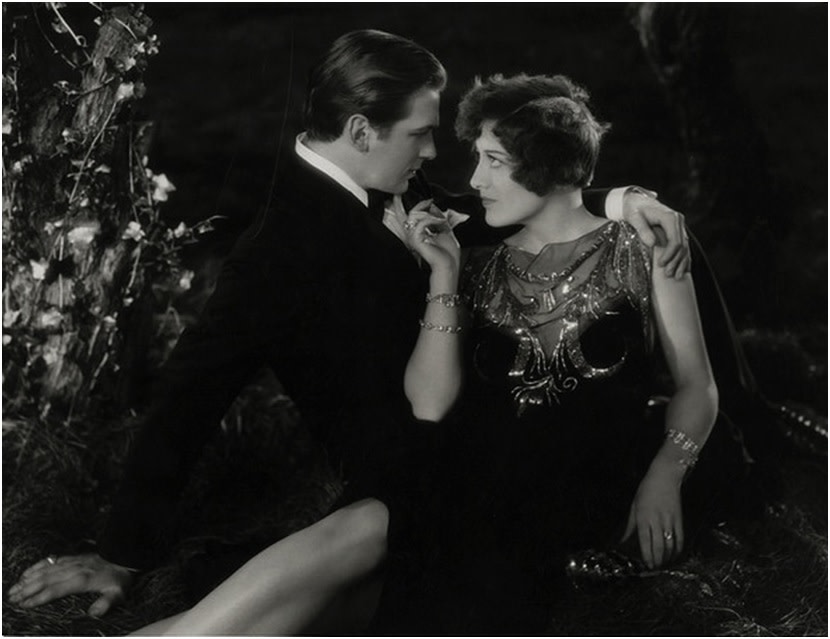 Douglas Fairbanks, Jr. and Crawford in Our Modern Maidens

A box-office smash, Our Dancing Daughters made Crawford one of MGM’s top stars and inspired a semi-sequel the following year, Our Modern Maidens (1929), which once again cast Crawford as a flapper heiress pitted against Page. Not only Crawford’s final silent, Maidens marked a milestone in the star’s life because it paired her with Douglas Fairbanks, Jr., son and namesake of the famous swashbuckling star. After a whirlwind courtship, the two actors married later that year, which ushered Crawford into the very seat of Hollywood royalty: Pickfair, the palatial estate of Fairbanks Sr. and his wife Mary Pickford, where Crawford quickly found herself uncomfortable and out of place. (Not least because her husband’s father and stepmother opposed their marriage, and withheld an invitation to their legendary home for almost a year.)

In 1930, Crawford starred in her third all-talkie, Our Blushing Brides — which, despite the familiar formula of the title, signalled a distinct pivot away from the flapper image that was becoming passé. Instead, Brides casts Crawford in the kind of role that would become her trademark in the new decade: the working girl who, whether through luck or pluck, magically ascends into the lap of luxury, for good or ill. These rags-to-riches parts not only allowed Crawford to display the innately sympathetic side of her persona (which, as James Quandt notes, is a little-commented-upon aspect of the steely screen image she would later be associated with), but also to achieve a new level of glamour, elegance and worldliness when encased in the exquisite creations of MGM’s famed costume designer Adrian. 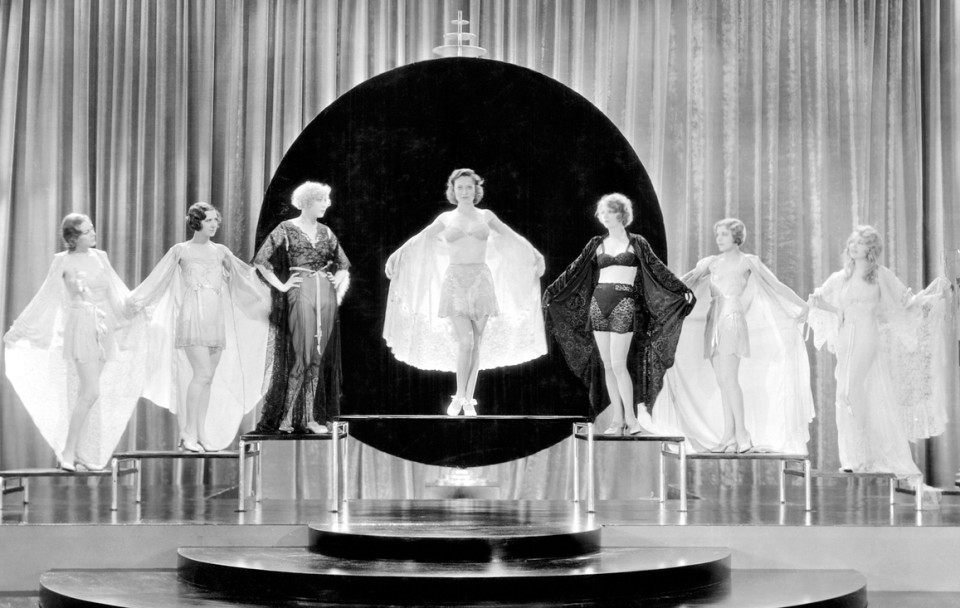 Crawford (centre) in Our Blushing Brides

It is here that the “Joan Crawford” we know best begins, but the groundwork for that emergence was laid by her now mostly overlooked work in the preceding decade. While the flapper per se disappeared from the screen, the less-noted aspects of that persona that Crawford exuded in Our Dancing Daughters — the effervescence masking a secret vulnerability, the will to resist societal pressure and prejudice, the ability to endure suffering and shame — would become intrinsic ingredients of the “classic” Crawford to come. The distance between Dangerous Diana and Mildred Pierce (not to mention pistol-packing Vienna in Johnny Guitar) is not as far as one might think.