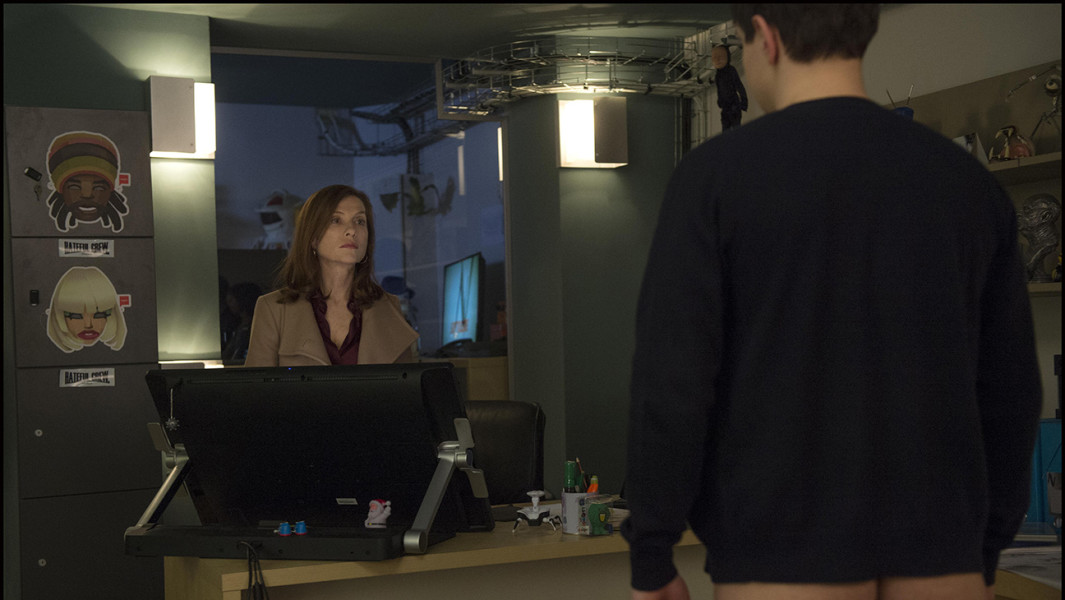 I was reminded of this as I watched a recent Cannes interview with Isabelle Huppert about her role in Paul Verhoeven’s latest film Elle. In Elle, Huppert (nominated for "Best Actress" for her role at the Oscars this year) plays a character one might expect — she is sadosexual, brow-cocky, bossy, loveable like a lion cub and impeccably-groomed; interdependently-feigning-independence like a domestic cat. She is also, as per Huppert, une énigme: “On a beaucoup de mal à saisir exactement qui elle est,” says Huppert. “On a l’impression qu’elle est à la fois une multitude de personnes.” (Loose translation: “One has a hard time grasping precisely who she is. We get the impression that she contains multitudes.”) Huppert then goes on to say: “The more information Verhoeven gives us, the less we understand.”

Dutch director Paul Verhoeven tends towards genre and cliché. Elle is a Hitchcockian mystery, a rape revenge fantasy and a French bourgeois family drama. It follows Michèle (Huppert), the director of an award-winning video game company as she, as per IMDb, “gets caught up in a game of cat-and-mouse as she tracks down the unknown man who raped her.” If it’s cat-and-mouse, it’s Tom and Jerry, in that the littler beast taunts and foils the bigger, as he aims to maim her. The film is also Krazy and Ignatz, in that, both parties basically love (or need) each other. Whatever it is, Elle pertains to the bestial, to the collective dream of culture which Verhoeven shadow puppeteers expertly. The reptilian brain. The snake in your pants. Vagina dentata. Fucking like bunnies.

Elle isn’t only cartoonish, though. It may be when Michèle selects a battle axe as her self-defense weapon, but at the family dinner table, life can get as grave and emotional as a film by Arnaud Desplechin, or the brothers Dardenne. “In all his movies,” Huppert said of Verhoeven, “he constantly plays with codes, subverts them, uses them when he needs them.” From the boy-meets-girl wet dream of Turks Fruit (1973), to the intergalactic adrenaline pump of Starship Troopers (1997), Verhoeven has fooled around with, and mired, mass audience expectations, which is also his way of creating suspense.

Usually, in a mystery, one expects clues to cohere. That’s the appeal of my favourite procedurals like The Good Wife, Law & Order and the novels of Jeffery Deaver. (And also why, like sugar, blow and other monotonal drugs, I limit my consumption thereof.) The pleasure’s too easy, neural-looping, ouroboron. A Verhoeven, though, I’ll rewatch over and again. They’re among my favourite films: Robocop (1987), Total Recall (1990), Basic Instinct (1992), Showgirls (1995), and now Elle.

(This loosely translates to: “Life is always an enigma in a way. Verhoeven addresses this well, this human tissue wherein we confront things without necessarily understanding them, or resolving them, in the moment. We’re obliged to confront them, and to keep moving.”)

An easy look at Verhoeven’s oeuvre might judge his work as superficial. It is spectacular, in form and subject. Colourful and wet—blood, guts, sweat and semen all out there. Pussy lips and leadman dicks. And it is beautiful, Verhoeven’s an elegant composer. Turks Fruit, said to be the most successful film of Dutch cinema (and one which inspired a young Isabelle Huppert to act), captures a love affair as vital sound-images that feel like memories: being buried under sand, running into an ocean clothed, having champagne sipped from your belly button, a flower in your asshole. Every Verhoeven flick has its own palette. Turks Fruit is ginger, orange, blonde and sky blue. Basic Instinct is champagne, ice, smoke, interior car leather beige and coke white. Elle is oak, walnut, mahogany and various shades of aging bruises and blood. Verhoeven’s attention to surface reflects my experience of the Real. In that, there’s no sole meaning-structure or moral code. What’s known is what can be observed, which can seem obvious, out-there and absurd. Why does Michèle order delivery sushi after she’s raped in her dining room? Why is she masturbating to her neighbour across the street as he unloads nativity lawn ornaments from a truck? How can she walk in high heels with that knee brace? How dumb is her son? And what exactly happened with her father, and how might that have organized her? In Elle, the unknown is funny. 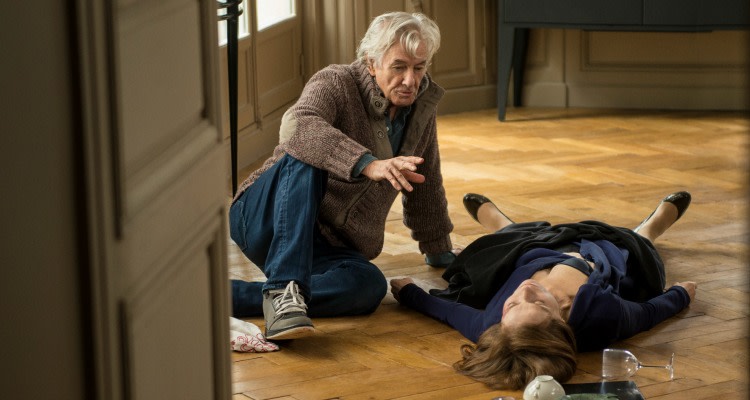 The big deal about Elle is that its plot pivots around multiple rapes and video games, which are Hot Topics. Spoiler alert: some of these rapes are potentially (enigmatically) consensual. Elle is more subdued (French) than Verhoeven’s ‘80s and ‘90s (Hollywood) ventures. Still, it’s flashy, graphic. In one scene, Michèle commands her staff to amp-up the sexy moans on some animated ogre-on-girl violence. We want boners, she more-or-less says. Verhoeven has often taken on trending media: TV news reportage in Robocop, mass market mysteries in Basic Instinct and war propaganda in Starship Troopers. The contemporary gaming industry in Elle instills an air of gender-war paranoia. The satire doesn’t go much further. Elle’s characters live in, but aren’t, like robot cops, coke-head cops, or 23rd century soldiers, dumb products of society and culture. They exercise intellect and agency — they’re French. That productively complicates the dichotomies of survivor/victim versus perp, or girls versus boys, all popular in “Gamergate” and “Rape Culture” talk.

There are few films in Verhoeven oeuvre that don’t feature a rape or more. Each incident is different. In Turks Fruit, it’s jealous retributive spousal abuse. In Spetters (1980), it’s a homosocial terror act, gang warfare. In Robocop, street harassment is interrupted iconically: the cyborg po-po aims between a woman's spread legs shooting her attacker in the genitals. In Hollow Man (2000), an invisible Kevin Bacon has his way with stunner Rhona Mitra, who played (in the only other role I’ve seen her in) a student who demands it rough, then cries rape with teacher in The Life of David Gale. In Basic Instinct, Michael Douglas displaces his humiliated brute lust, roused consciously by Sharon Stone, on his on-and-off again lover/psychotherapist Jean Tripplehorn. Sometimes the rapes are attempted, background matter, cut between scenes like, whatever. Sometimes they’re pornographic, aurally coupled to turn-on. And sometimes, like in Showgirls, and the opening of Elle, they’re brutal.

The assault of sweet seamstress Molly Abrams (Gina Ravera) in Showgirls traumatized me more acutely than Irreversible (2002) when I first watched it on Valentine’s Day 2009. Every time since, sometimes I’ll fast-forward through it. What’s so affecting about this scene is that, though gory, it isn’t gratuitous, because it’s key to the narrative. Before it, we’re partying in a Barbie dream mansion with an aspirational cast of Las Vegans, each high on their own delusions. The act of violence sobers. Everyone’s cards, all playing for totally different stakes, and a collusion between men, is revealed. The men assume they’ll win the game of the consensus reality they set up, in which showgirls, selling their bodies, hoping for a return of soul, can’t not lose. But then suddenly with Molly’s beaten body, the girls get how the game is rigged, and the star of it starts breaking rules and balls. It’s also where I’m left feeling sullied for my earlier complicit pleasure-taking in the movie. Did I abet this character’s rape by wishing for her dreams to come true? Do I abet rape by liking movies so showy?

Huppert is genius in the role, which is something of a reprise of her work in Michael Haneke’s La Pianiste (2001) and Catherine Breillat’s Abus de faiblesse (2013). In all three films, Huppert plays kinky, authoritarian French women in their workplace, with full nudity and empathy. Some of the resemblances are uncanny. In La Pianiste, as in Elle, we watch her wash blood from her wounded vagina down a bathtub drain, then have dinner. In Abus and Elle, Huppert’s postmenopausal hundred-pounders manage to charm thick skulls into slavish attention with a girlish manner — that giggle. In all three, the woman, despite masterfully manipulating others' desires, remains mysterious to her own. The iconic line of Breillat’s Abus de faiblesse — Huppert’s main character’s reply to a question of why — is, “c'était moi, mais c'était pas moi.” It was me, but it wasn’t me. She can’t say anything more of her behaviour, mais ça suffit. “But that’s enough,” she declares.

Verhoeven has told press that no American actress wanted to take the lead in Elle, and that is why he made it French. It’s a memorable line and a provocation, a fine way to seduce Hollywood elites into a future venture. I believe that what probably put Americans off wasn’t the script’s excess, its sex and violence (normal), but its ambiguity. Women in the US are still used to being scripted, if leading like Elle, as bitches. Whereas Michèle is divinely feline, as Camille Paglia writes of the species, worshiped in Ancient Egypt:

"Compared to dogs, slavishly eager to please, cats are autocrats of naked self-interest. They are both amoral and immoral, consciously breaking rules… Haughty, solitary, precise, they are arbiters of elegance... prowlers, uncanny creatures of the night. Cruelty and play are one for them... Cats dwell in the occult, that is, the 'hidden.'” 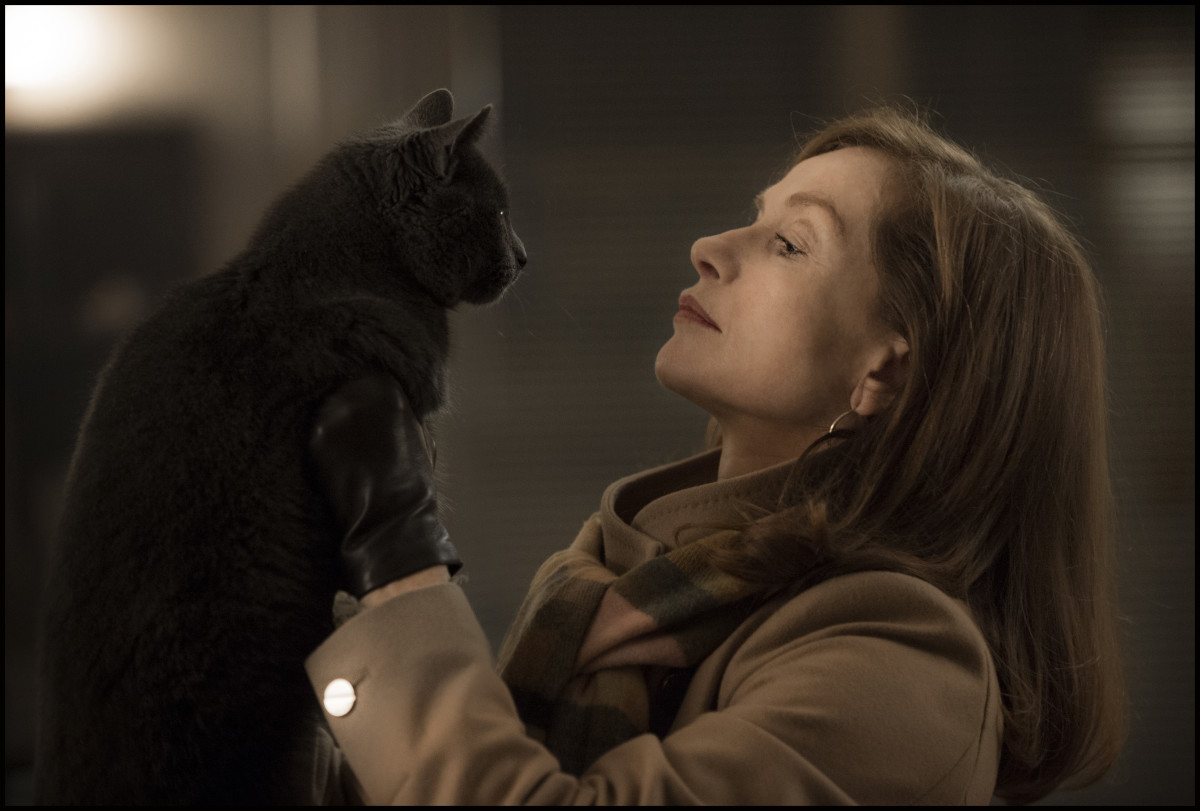 While a wondrous description of Michèle, we’ve yet to capture her all. Humans are their own inspired animal. We are one of the rare species to take pleasure from procreation. (With male cats’ cutting pricks and females’ lordosis behavior, their copulation looks and sounds like what we’d call rape.) The pleasure of our sex, even when coerced, is part of the mess of consciousness that also makes for movies. Verhoeven’s movies tend to end in a gag or a punchline. Elle’s clincher is a wink back on the director’s oeuvre, at a repeat theme that’s mostly neglected in Elle. It’s an inside joke.