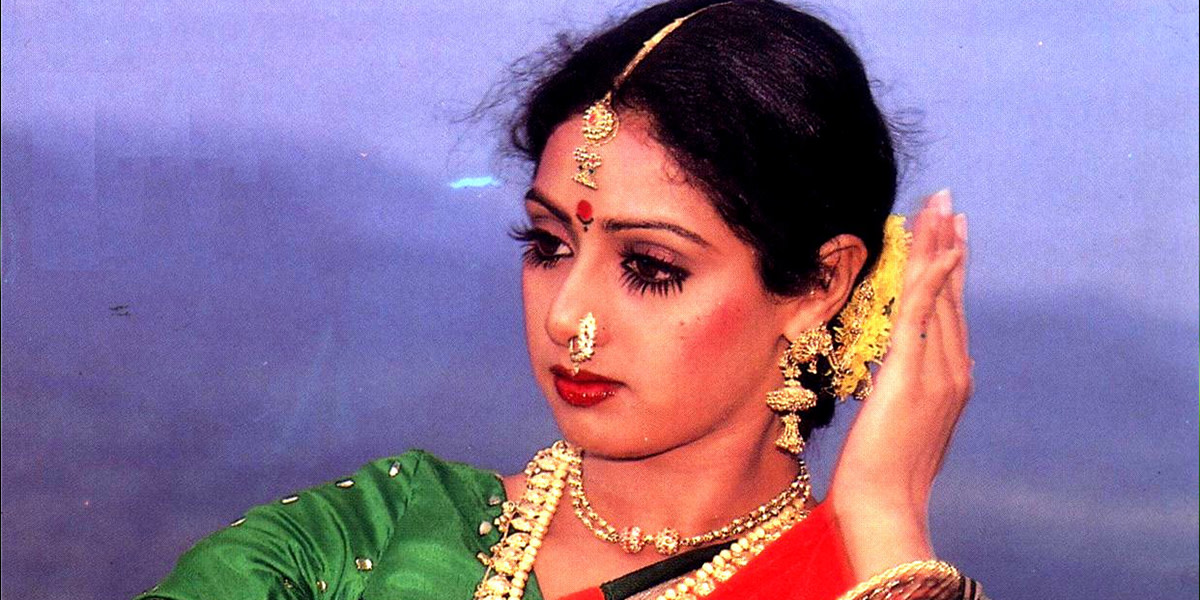 Divine Stardom: A Sridevi Tribute begins on Saturday, July 14 with a screening of Chandni and continues on Sunday, July 15 with English Vinglish.

In September 2012, Sridevi Kapoor, who went by the mononym Sridevi throughout her career, accomplished what few Indian actresses had done before her: she staged a comeback. Following a 15-year hiatus from the screen, she returned with Gauri Shinde’s English Vinglish, a Hindi-language vehicle that was both a critical and commercial hit; it screened at the Toronto International Film Festival to, reportedly, a ten-minute standing ovation. 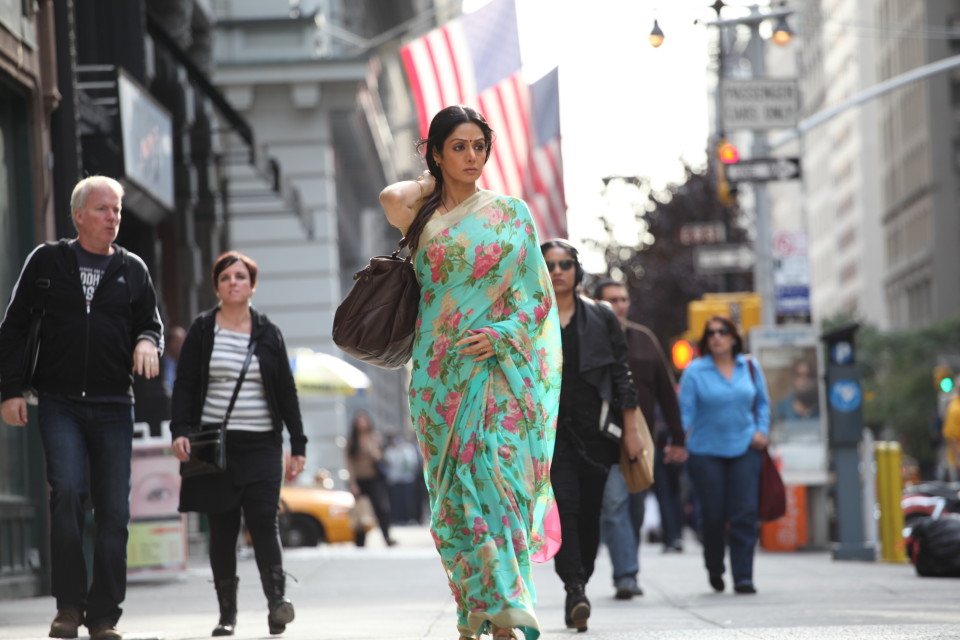 The fact that the film had its world premiere internationally put Indian media outlets in a rather tough spot, as their journalists were compelled to convey the magnitude of Sridevi’s stardom to Western audiences who were largely unfamiliar with her — a rather daunting attempt at cross-cultural translation. Some settled on calling her the “Indian Meryl Streep” — a comparison that suggested her stature and sway over the nation, the raging admiration she inspired from her devotees, and how heretical it was to criticize her. Save Pauline Kael, only fools criticize Streep; ergo, Sridevi was beyond reproach.

Something about that opportune Streep comparison didn’t feel quite right, though — and as Sridevi’s tragic death earlier this year at the age of 54 (in what has officially been attributed to an accidental drowning in her hotel bathtub) now gives us the considerably sadder task of framing precisely who she was and what she meant to millions of viewers around the world, it’s worth noting that she was forged by an entirely different cinematic vocabulary than was Streep. Just start with the numbers: Sridevi’s 300-film output dwarfs Streep’s. Sridevi was a people’s actress as well, gaining the populist support much quicker in her career than a figure like Streep, who, with her meticulously chiselled Yale Drama School technique, didn’t really attain a more broad-based appeal until The Devil Wears Prada in 2006 .

Maybe Sridevi was closer in spirit to prime Julia Roberts: an actress who could empty an entire nation’s pockets by drawing it to the theatre, singlehandedly evaporating an audience’s sorrows. India was in thrall to Sridevi during her five decades on screen, which is why it’s no hyperbole to state that her death represents a genuine national tragedy. She was a movie star of the most classic vintage, projecting a majestic quality that surpassed mortal limitations; to watch her films is at once to be reminded of a popular cinema’s limitations for women, and the extraordinary possibilities she discovered within it. She shattered box-office records previously held by male stars; screenwriters wrote roles for her; and the fraternal directorial duo Abbas-Mustan even reportedly decided not to cast her as a murder victim in their 1993 film Baazigar because they feared that audiences would react so fiercely to her character’s death before the film’s halfway mark that they would storm right out of the theatre. Perhaps more than anything Sridevi was a study in contrasts: a dynamo on screen who, in interviews, seemed almost embarrassed to be a star, as if she were both keenly aware of her importance and in a constant state of denial about it. 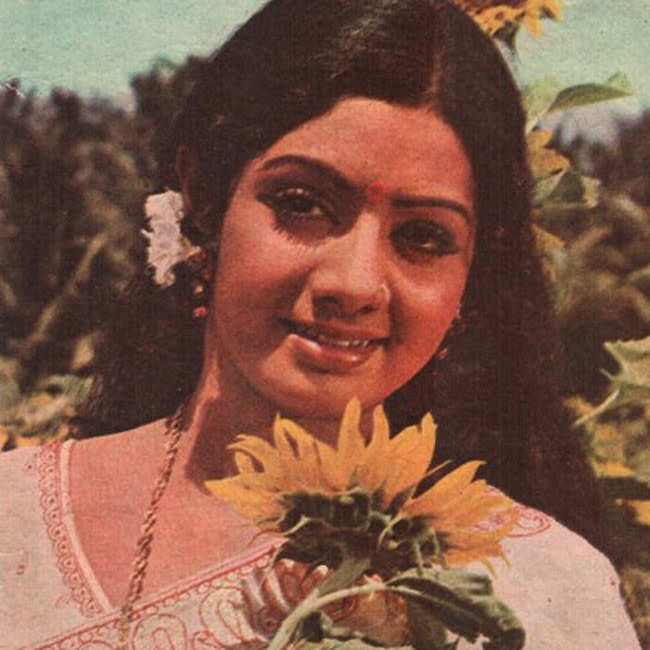 Born in a village in Madras in 1963, Sridevi acted in her first film when she was four years old. She spent the next decade and a half wading through various regional cinemas within Southern India, from Tamil to Telugu to Malayalam to Kannada-language films. Maturing rapidly from a child artist to a teenager who was tasked with playing adult women when she was just 13, she quickly became a force within Southern regional cinema. “Though she was 13 or 14, she had the understanding of a 20-year-old,” director K. Balachander, who worked with Sridevi frequently during this time, would later recall of her.

Sridevi’s transition into popular Hindi-language cinema, better known as Bollywood, was uneasy at first. Though at the time she could barely speak Hindi, she made her debut lead at age 16 in Solva Sawan (1978), a remake of the 1977 Tamil film 16 Vayathinile (which was subsequently remade in Telugu the next year as Padaharella Vayasu) that tanked so badly that few clips of it even exist online. Despite this rocky start, a mere four years later she was already faring considerably better: in 1983 she starred in no less than six films, the most successful of which was the throwaway action hit Himmatwala, where the glitzy and revealing outfits she wore in some of the film’s dance numbers earned her the affectionate sobriquet “Thunder Thighs.” 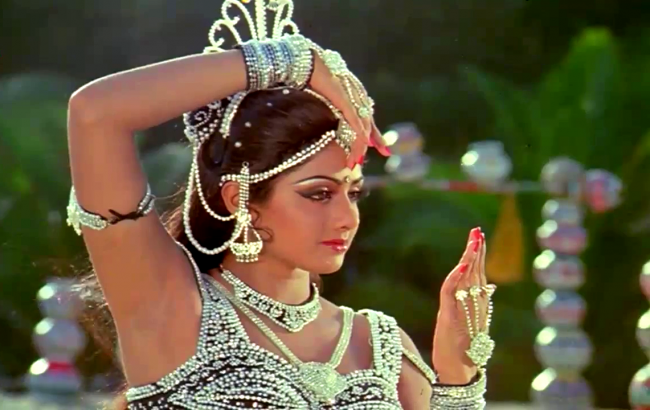 That same year she also starred in the decidedly more sombre Sadma, a Hindi remake of her Tamil-language 1982 film Moondram Pirai. While Sridevi plays the same role in both — a woman who regresses into a childlike mental state following a car accident — the performances are radically different, proof that spontaneity could be both a blessing and a curse for her. In the Tamil-language version, she is naturalistic and affecting; in Sadma she is affected, delivering a performance so practiced that it begins to feel like a stunt. She agreed with this assessment of both performances herself: “Most people feel, and I agree, that I was better in the original Tamil version,” she told MOVIE magazine in 1995. “I am a spontaneous actress. My first take is always the best. The second take is often a copy of the first.” 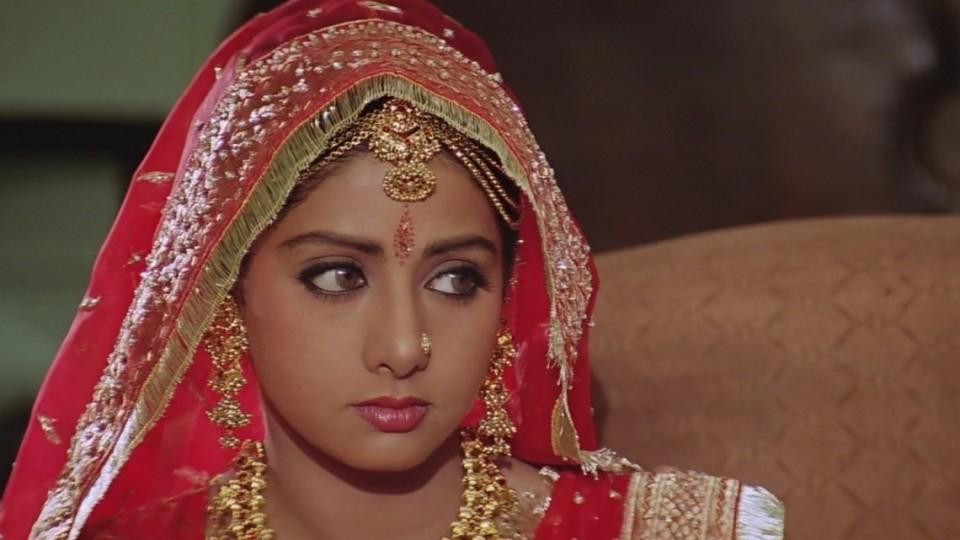 Sridevi would spend the next decade and a half cementing her stronghold over Hindi cinema, starring in a number of films that were box-office smashes and awards juggernauts. While she became populist director Yash Chopra’s muse for two films, Chandni (1989) and Lamhe (1991), her strongest commercial work in this period may be Shekhar Kapur’s Mr. India (1987), a science-fiction film in which she plays a journalist. Although this film is perhaps most famous for the “Hawa Hawai” sequence, where her body topsies and turvies with the discipline of a self-correcting tornado, the role itself is a Bollywood actor’s feast, offering Sridevi plenty of opportunities to make her puppy-dog eyes roll like pinballs and flutter with sorrow.

Sridevi walked away from Bollywood in 1997, a time when other female stars who had followed her lead — such as Madhuri Dixit, whose 1994 musical comedy Hum Aapke Hain Koun..! had become the highest-grossing Bollywood film in history — were threatening to topple her from her perch atop Hindi cinema. When she emerged from her self-imposed exile 15 years later, she seemed to be a different actress entirely — in a good way, as English Vinglish may represent the finest work of her career. As Sashi, a housewife treated so heinously by her preteen daughter and grown husband for being unable to speak English that she covertly begins taking English classes, Sridevi gives a performance of marvellous restraint, seeming to draw on experiences and feelings deep inside of her that she had never before offered up to the screen. 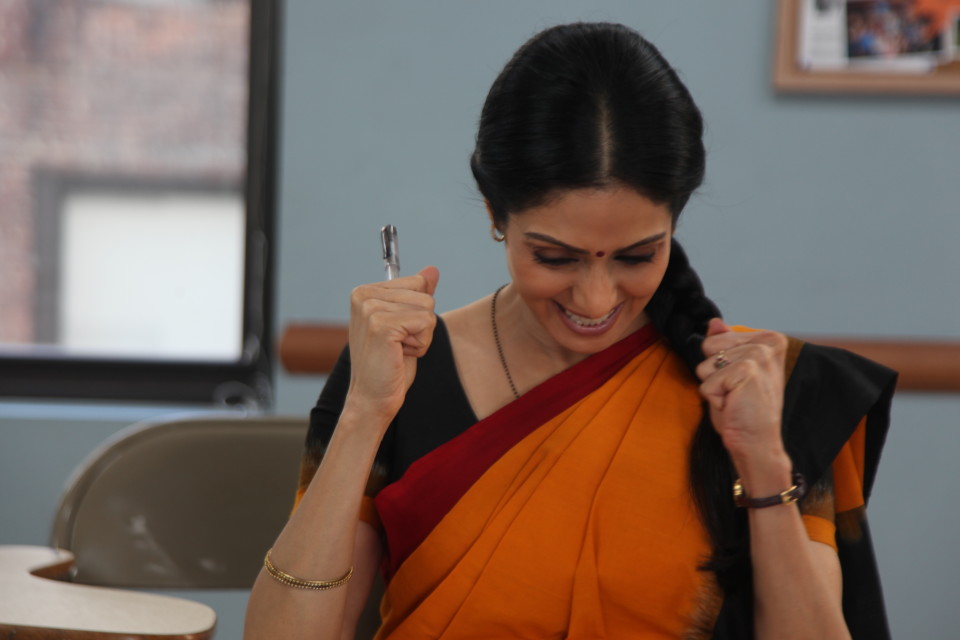 Sridevi’s 300th film, Mom, was released last summer; she plays the stepmother of a teenage girl who is raped, and who seeks revenge upon her tormentors. Although the film indulges in a rather fatiguing deification of the mother figure, Sridevi is the stuff of fantasy as a woman swallowed by her own grief and determined to retaliate. In one scene from the film’s first quarter, she comes upon her stepdaughter’s bruised, battered body in the hospital and trembles in disgust. Even though she is framed in a long shot, her trauma is visceral and cutting.

In these two last-named films alone, one gets the sense that Sridevi was, incredibly, just now beginning to understand how deep her talent ran. In her prime, she could sometimes lack technical proficiency in a way that revealed her lack of formal training: her high-pitched voice and tendency to lapse into coquettish affectations could grate in the wrong roles. When it fit, though, as in Mr. India or Chaal Baaz (1989), she was peerless in her dynamism.

This woman who had never taken a class for acting was a school unto herself: a lifetime spent before the camera seems to have led her, through some fortuitous combination of the inadvertent and the intentional, to develop a formalism all her own, a style that later acolytes would study, savour, and learn from. During the press tour for Mom, Nawazuddin Siddiqui, one of Sridevi’s co-stars in the film, confessed that he would pore over her film work when he was a student at the prestigious National School of Drama; in December, an ardent Sridevi fan from Chennai was planning to open an acting institute in her name, with a syllabus drawn entirely from her body of work. Perhaps most notably, the molecules of her performative approach live on in two of Hindi cinema’s brightest female talents, Vidya Balan and Kangana Ranaut, both of whom have cited her as an inspiration and who have sought to iterate and improve on Sridevi’s style, marrying impulse to a firmer technique.

These actors who follow in Sridevi’s footsteps may not have to make as many “check-cashing films” as did she, with the result that their filmographies may wind up with noticeably fewer wrinkles than hers. But her DNA is inherent in this new generation of talent: before they were actors, they were moviegoers like the rest of us, who came of age watching her on screen and wondering how we could reproduce the great gift she had for making people stare at her, thunderstruck. For the longest time, an Indian cinema without Sridevi was simply unthinkable. Her long absence felt interminable; her return in 2012 fooled audiences into thinking she was eternal. While Sridevi has now sadly reminded us of her mortality, the remarkable women she created on screen endure, in all their spontaneity, verve, and powerful, resonant depth. 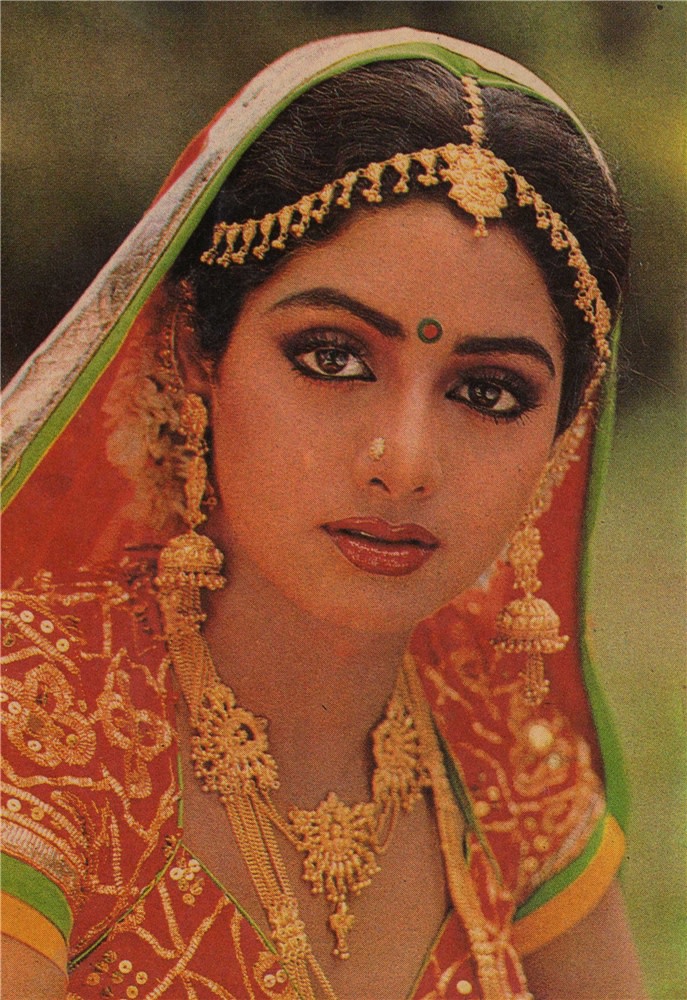