Durga Chew-Bose writes on Hitchcock's classic, Rear Window, which will screen at TIFF for free October 25 for the UNESCO World Day for Audiovisual Heritage

__On October 25, TIFF will screen an exquisite IB Technicolor 35mm print of Alfred Hitchcock's Rear Window to mark the UNESCO World Day for Audiovisual Heritage, an annual event which aims to raise awareness of the need for film preservation and the conservation of our audiovisual heritage. You can catch a free screening of the film by purchasing tickets two hours before the 6:30pm screening, which will be introduced by George Eastman Museum Preservationist Anthony L'Abbate who will discuss the Technicolor dye-transfer process. The following article by Durga Chew-Bose was originally published on The Review in the summer of 2016. __

The red mercury column is pushing 100 and it’s only just morning. Now, the neighbours are waking up, having slept on their fire escape, and another’s radio blares as if rivaling the heat’s trying, totally dank inexorability. Jimmy Stewart’s sweaty brow is glistening like a glazed donut. Scrawled on his leg’s cast are the words, “Here lie the broken bones of L.B. Jefferies.” And there you have it, in less than a minute, Hitchcock has captured summer in New York: the swelter, the rare reprieve, and that something elegiac, like the overall sense of feeling confined. It putters between dissatisfaction and the vague promise of a loophole: a sudden storm that might cool the air or dislodge its density, a breeze that locates the nape of your neck, or a neighbour whose goings-on might provide temporary diversion. Heat rising in a city made vertical means that those who choose to stick around those three or so months, are the true blues. As E.B. White wrote in his 1949 essay, “Here Is New York,” published five years prior to Hitchcock’s Rear Window, they are “no casual, spotty dwellers… only the real article.”

Released in September 1954, Rear Window, starring Jimmy Stewart as Jeff, a newspaper photographer who broke his leg on the job — who when we meet him, has one week left with his “plaster cocoon” — and Grace Kelly as Lisa Fremont, his socialite girlfriend (not to mention Raymond Burr as the bad guy, Lars Thorwald), is a complicated movie to enjoy watching. It’s a movie about the male gaze in hyper-focus. It’s a movie about a man who is, as Jeff’s nurse notes, “window shopping.” Wheelchair bound, Stewart sits and stares. He looks at women, never having to put up with them or even intervene, especially if an incident presents itself as inconvenient to whatever moral compass compels him. He barely obliges his own girlfriend who is pining for some symbol, no matter how faint, of commitment. They argue; it’s summer. She seems to say the same thing she’s been saying for some time now and Jeff is barely listening. Perhaps he’d be more mindful in say, October, when the temperatures cool and autumn in New York focuses our attention. But here I am making excuses for a man who isn’t listening. And anyway, Rear Window’s suspense is contingent because summer makes us paranoid and quick to question, and dozy in general. Whatever we’re seeing, we’re only half-seeing. The apartment windows across his courtyard form a pattern of stars and Jeff, without moving, draws lines and makes connections, crafting constellations into conspiracy.

Jeff sits and stares out his window like we sit and scroll, and double tap, and “like,” and rove distracted between many open tabs. He stares like we watch movies while playing on our phones, and create narratives about strangers merely from believing that we have an understanding of their lives based on their Instagram accounts. (“Each pane is, or imitates, an entire landscape or room,” wrote Sarah Nicole Prickett for T Magazine in 2013, characterizing the app.) And in Jeff’s case, through his gaze — his binoculars and long-focus lens — we experience murder as it’s been suggested through glimpses and a tally of gut instincts, or what Roger Ebert once described as “the montage of suspicion.”

Summer in this Greenwich Village courtyard, seems especially, like its set design, artificial. Artificial in how Hollywood mislays history and mood, or luxuriates in a self-made illiteracy of the times, or foretells them too, sometimes eerily so. Think of Kitty Genovese’s murder in Kew Gardens ten years after Rear Window’s release, prompting an inquiry known as “the bystander effect.”

When “Miss Lonelyhearts” is attacked by her companion, Jeff looks on but does not call the police. He merely looks away. He does nothing and decides the incident is merely tragic. But the intrigue of Mrs. Thorwald’s disappearance, no matter that he has zero proof of any wrongdoing, prompts a full-blown investigation on his part, even putting his own girlfriend in harm’s way. “New York blends the gift of privacy with the excitement of participation,” wrote White. “And better than most dense communities, it succeeds in insulating the individual (if he wants it, and almost everybody wants or needs it) against all enormous and violent and wonderful events that are taking place every minute.”

Summer is the banner season for mourning. Now more than ever, a movie about summer in New York, about murder, voyeurism and accountability needs to be contextualized. As writer Mariame Kaba brilliantly wrote last year in her not-ode to summer heat (more like a dread) in the New Inquiry, “It’s the season of hyper-surveillance and even more aggressive policing of young people of color in my neighborhood.” Summer, writes Kaba, exacerbates: “If past is prologue, my community can look forward to another summer of intense, relentless, and surely illegal police harassment of young people of color and specifically young black men.”

Shot entirely at Paramount studios on an elaborate soundstage, Rear Window is not just dated but fiction in its most irresponsible form: without a conscious. Don’t get me wrong. I once loved this movie. And there are scenes that I still love. I derive pure thrill from Jeff’s and my own, immobility. The world so often leaves us feeling helpless, or rather, grieving without the proper tools to act. And so, maybe going to the movies and willfully putting ourselves in that position, is an act of preservation. When my periphery was narrower, a New York City courtyard seemed more storied than my entire home city of Montreal and Grace Kelly was the unreal — beautiful in a diaphanous way. 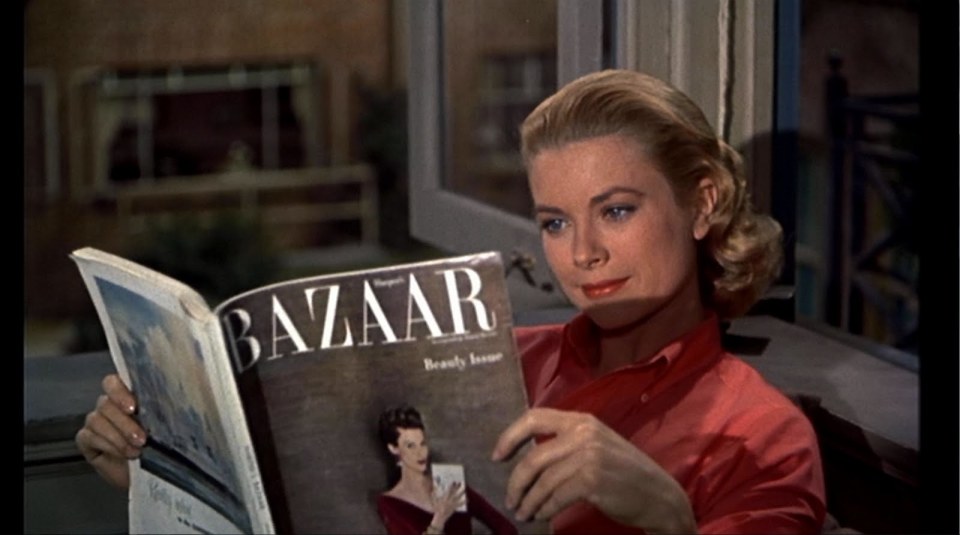 In Rear Window and especially in Hitchcock, we experience women only if they are women in danger, or women dead, or women living pint-sized (dollhouse narratives), or women as merely bodies who stretch in the morning and curl up into bed at night, who entertain male guests, and seem preternaturally built for gliding across the room like a Jerome Robbins dancer. Women as nags who pick fights, or women postponing life for rare, unshared romance and the distant, ambiguous idea of marriage in a two-bedroom apartment.

Or women with cinched waists, twirling in Edith Head gowns, or women alone, pathetic and desperate, or women concerned only with fashion and frivolity, or women who’ve developed an adjacent self so as to survive the cruel, everyday wrench of feeling ignored. Or women as both literal and emotional nurses, or whose nicknames boundary the spectrum of male gaze — “Miss Torso” and “Miss Lonelyhearts,” for instance.

Women with wants that are only attained once they’ve been siphoned through a man’s whims, freedoms and his own career-construction of the world. Women who only become visible once they place themselves into his line of vision; who’ve learned young that in order to be seen, she must provide him with an opportunity to swoop in. He’ll care if caring for means providing protection for her. He’ll care if her request for attention falls into his purview.

The women in Rear Window outnumber the men but they also end up murdered, attacked, and/or broken-hearted. Having traded in their Edith Head gowns for more sensible trousers, they are now awarded entry into this man’s life. He’s napping mid-day — now with two broken legs — and only once he’s fully asleep, will she reach for her copy of Harper’s Bazaar. Being a woman is an old habit that dies hard.

Yet still, despite not being sure how to watch movies I once loved, or even know if I can still love them, I kept thinking about my favourite Lydia Davis story. Like connecting my kid-self to this self: the 30-year-old me.

“A woman, thirty, does not want to leave her childhood home.

Why should I leave home? These are my parents. They love me. Why should I go marry some man who will argue and shout at me?

Still, the woman likes to undress in front of the window.

She wishes some man would at least look at her.”