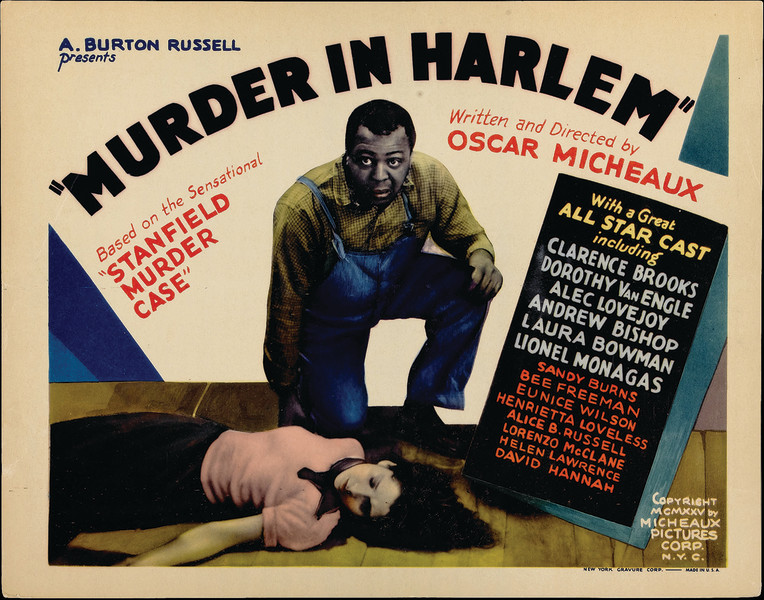 From the 1920s to the 1940s, Oscar Micheaux was the most prolific, successful — and indeed only — African American writer-director-producer in American cinema. A Pullman porter and farmer before he established himself as a successful author with his self-published novel The Conquest: The Story of a Black Pioneer, Micheaux made his move into filmmaking in 1918 when he was approached by the Lincoln Motion Picture Company — the country’s largest producer of “race” movies, i.e., films targeted at African American audiences in the segregated theatres that specifically catered to them — for the film rights to his novel The Homesteader. When Micheaux demanded creative control over the film adaptation, negotiations quickly broke down. Undeterred, Micheaux set up his own production company and made the film himself, launching a remarkable three-decade career of proudly independent filmmaking.

Although Micheaux’s films typically pattern themselves after Hollywood genres — musicals, crime thrillers, melodramas, etc. — they question, criticize or invert the ideological bases of those genres. Micheaux’s most famous film, Within Our Gates — often viewed as his response to D.W. Griffith’s landmark racist epic The Birth of a Nation — exemplifies his particular progressive approach in its depiction of the horrors of lynching and the racist culture of the American South, and its distinctly middle-class vision of African American self-improvement. (Micheaux was a dedicated disciple of African American self-help guru Booker T. Washington, to whom he dedicated the novel of The Homesteader.) Educated, socially conscious and determined to make a place for themselves in mainstream (middle-class) society, Micheaux’s heroes stand in stark contrast to the antiquated and denigrating portrayals of African Americans that dominate so much of Hollywood history.

While some later commentators have criticized Micheaux for the essential conservatism of his social philosophy, by presenting contemporary African American experience on screen his work intrinsically defies and protests the colonialist mythmaking upon which so much of the North American cinema was built, blazing a trail for the later, more radical work of such African American filmmakers as Melvin Van Peebles, Charles Burnett and Spike Lee. As with the rising generation of Indigenous filmmakers, who share a similar history of marginalization and racism with African Americans and have likewise offered images of modern Indigenous life as a counterpoint to the “history” portrayed in Hollywood’s golden age, Micheaux’s is a cinema of opposition: a weapon to fight against racial oppression and the perpetuation of that colonialist ideology that resides at the core of both establishment filmmaking and establishment politics. In this, as in so many other ways, Micheaux was the very definition of American independence.

Read about some of Micheaux's most important films below. 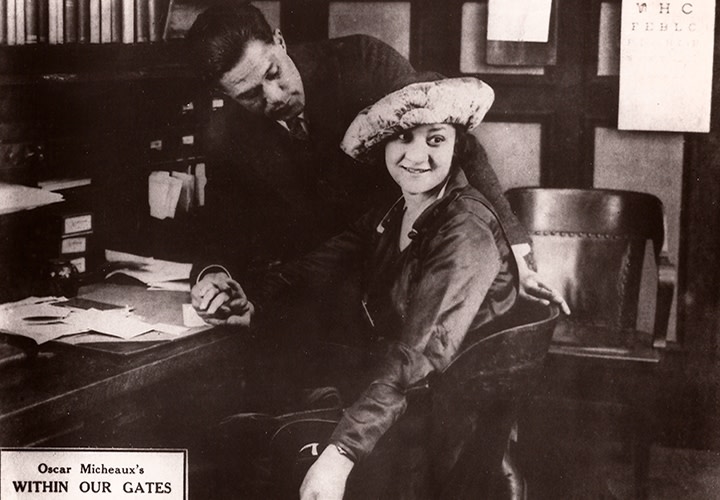 Within Our Gates (1920). Micheaux’s best-known film and the earliest surviving film by an African American filmmaker, Within Our Gates is often viewed as the director’s response to The Birth of a Nation: the scene of a white man attempting to rape a black woman directly inverts the famous forest pursuit from the Griffith film, while a terrifying lynching scene bravely brought this then all-too-common practice into mainstream discourse. Southern-born Sylvia Landry (Evelyn Preer) arrives in the North to raise money for a rural African American school faced with foreclosure. Winning the confidence of a wealthy white philanthropist, Sylvia also becomes romantically involved with a local doctor, who gradually learns about her traumatic past. Running into censorship trouble in many cities on the pretense that its starkly realistic scenes of white-on-black violence would incite race riots, Within Our Gates was ultimately released in multiple versions to packed houses; in 1992, the film was selected for preservation by the US Library of Congress’ National Film Registry for its “cultural, historical, and/or aesthetic significance.” 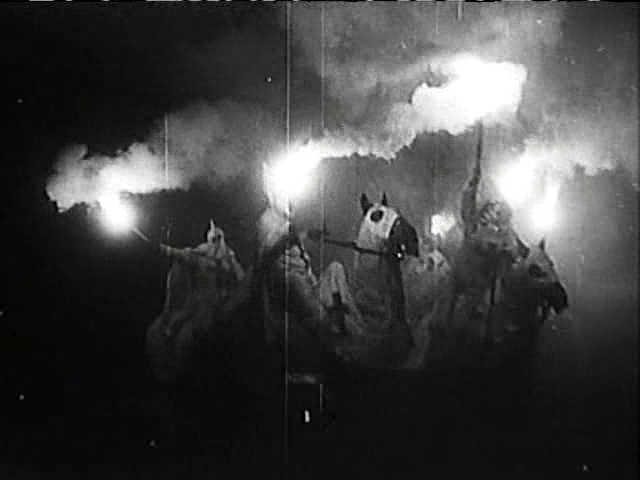 The Symbol of the Unconquered (1920). Made shortly after Within Our Gates and drawing on material from Micheaux's semi-autobiographical novel The Homesteader, The Symbol of the Unconquered tells the story of Eve Mason (Iris Hall), a young woman who travels to the North to claim the land left to her by her grandfather. When oil is discovered in the area, the local white population plots to drive all black homesteaders off their property. As powerful an indictment of racial discrimination as Within Our Gates, Symbol goes even further than its immediate predecessor by addressing issues of “passing” and black self-hatred, through the character of a mixed-race hotelkeeper whose concealment of his “shameful” heritage has driven him to outright villainy. Although the surviving version of the film is missing several scenes that were cut or simply lost — including a climactic standoff where the homesteaders bravely repel a KKK raid — Symbol remains one of Micheaux’s most powerful and personal works. 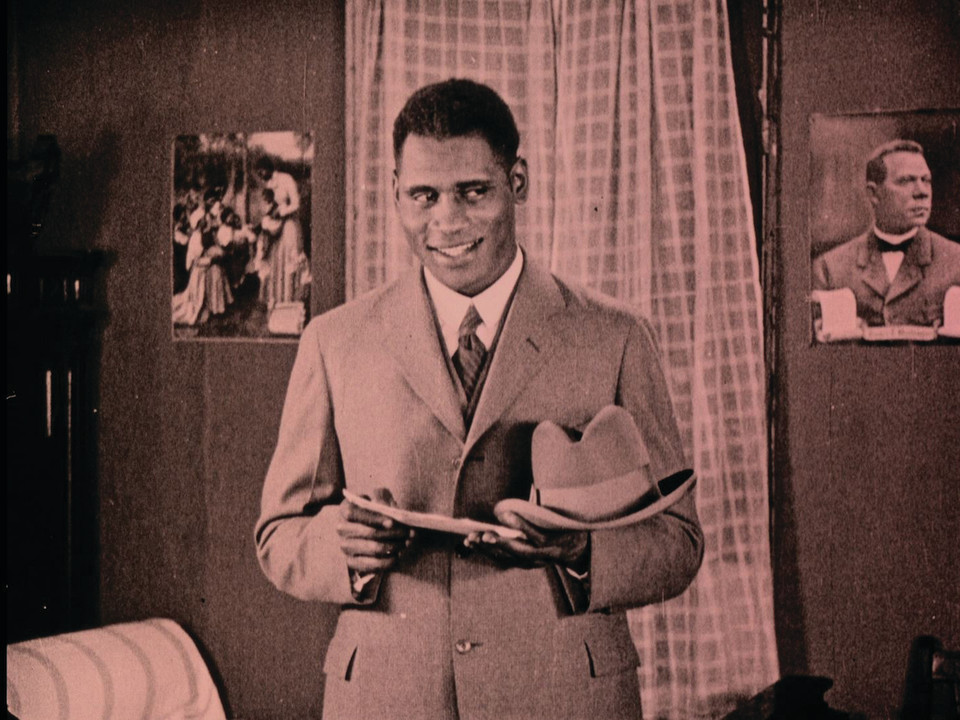 Body and Soul (1925). One of Micheaux’s biggest box-office hits and considered by many to be his masterpiece, Body and Soul features the screen debut of legendary actor and singer Paul Robeson in the dual role of estranged twin brothers: one an escaped convict posing as a preacher under the name of Reverend Isaiah T. Jenkins, the other a gifted, impoverished young inventor named Sylvester. While scheming to dupe his congregation out of their hard-earned wages, Jenkins falls in love with one of his parishioners, Isabelle Perkins (Julia Theresa Russell), who just happens to be in love with his brother; sin, scandal, and last-minute salvation follow in due course. Featuring one of Micheaux’s most dramatic twist endings (which we wouldn’t dare to reveal here), Body and Soul was yet another Micheaux production to run into trouble with censor boards: the film was banned in New York State for its “sacrilegious” depiction of religion, and was only allowed release once Micheaux made radical cuts to reduce it to little more than half its original length. The original director’s cut is now considered a lost film. 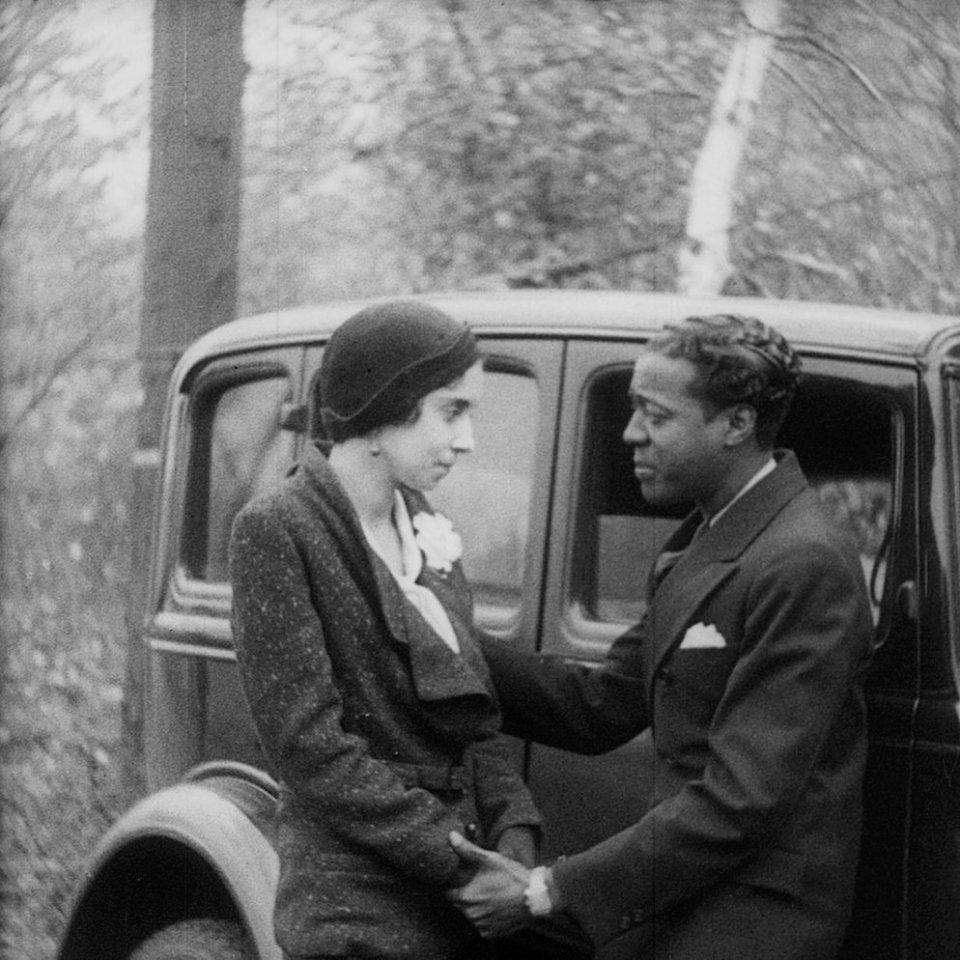 Veiled Aristocrats (1932). A sound remake of Micheaux’s silent The House Behind the Cedars, the rarely screened Veiled Aristocrats exists today only in a fragmentary form. Clandestinely returning to his family home in North Carolina after 20 years away “passing” as a white man, lawyer John Walden (Walter Fleming) discovers that his sister Rena (Lucille Lewis) is in loved with African American businessman Frank Fowler (Carl Mahon). Convincing their mother that the light-skinned Rena should try to “pass” in order to make a better match, John takes Rena back with him to a neighbouring town and sets out to find her romantic entrée into a wealthy white family. 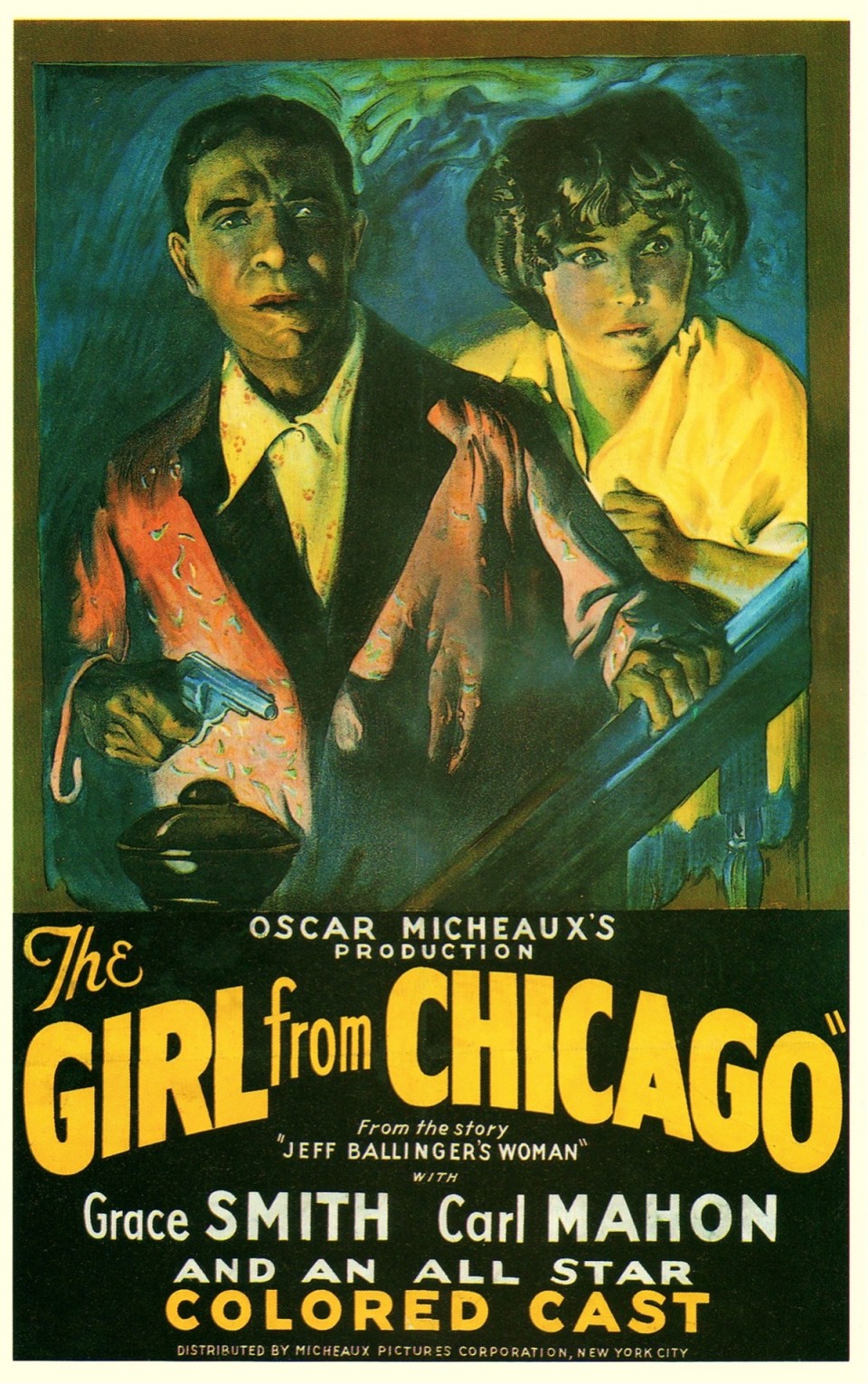 The Girl from Chicago (1932). Dispatched to Mississippi to investigate an organized crime ring, undercover federal agent Alonzo White (Carl Mahon) falls in love with beautiful young Norma Shepherd (Starr Calloway), who has recently arrived in town to become a schoolteacher. When Norma is menaced by a local crime boss, Alonzo rescues her and the couple decamps for Harlem, where they become embroiled in the assassination of a Cuban racketeer (Juano Hernández, making his screen debut here years before becoming a well-known Hollywood character actor in such classics as Intruder in the Dust, Jacques Tourneur’s Stars in My Crown and John Ford’s Sergeant Rutledge). A remake of Micheaux’s silent The Spider Web, The Girl from Chicago is considered by many to be Micheaux’s finest sound film, featuring atypically polished performances by his lead actors and the lively song-and-dance numbers that are a highlight of many of Micheaux’s later films. 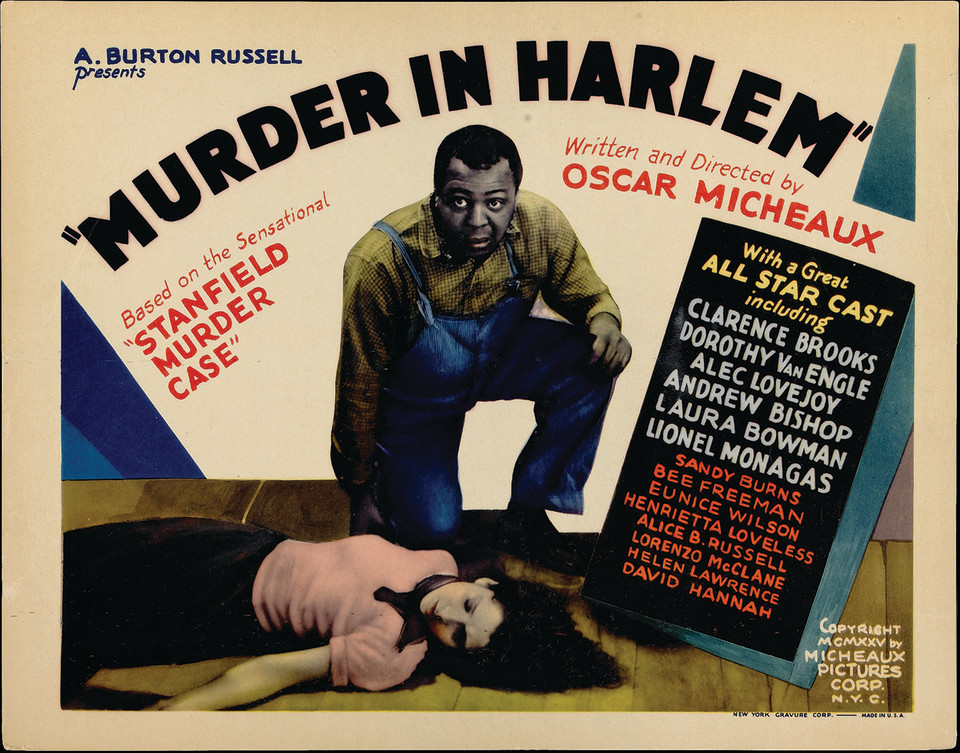 Murder in Harlem (1935). A black night watchman at a factory discovers the body of a young woman, and is accused of the murder by the factory boss and a custodian; when he is arrested and charged with the crime, his sister (the luminous Dorothy Van Engle, a Micheaux regular) retains crusading law student Henry Glory (Clarence Brooks) to clear her brother’s name. A sound remake of Micheaux’s 1921 silent The Gunsaulus Mystery, Murder in Harlem is based on the notorious 1913 trial of Leo Frank, a Jewish factory superintendent convicted of murdering a 13-year-old girl based largely on the testimony of Jim Conley, an African American night watchman; when his death sentence was commuted to life, Frank was dragged from jail and hanged by a lynch mob, none of whom were ever charged. The Frank case fascinated Micheaux for its exposure of the depth and breadth of racial prejudice in America — scapegoated for his Jewishness, Frank himself resorted to racist stereotypes in accusing Conley of being the real murderer — and in Murder in Harlem he inverts the Frank and Conley roles to explore the case’s resonance with the African American experience. 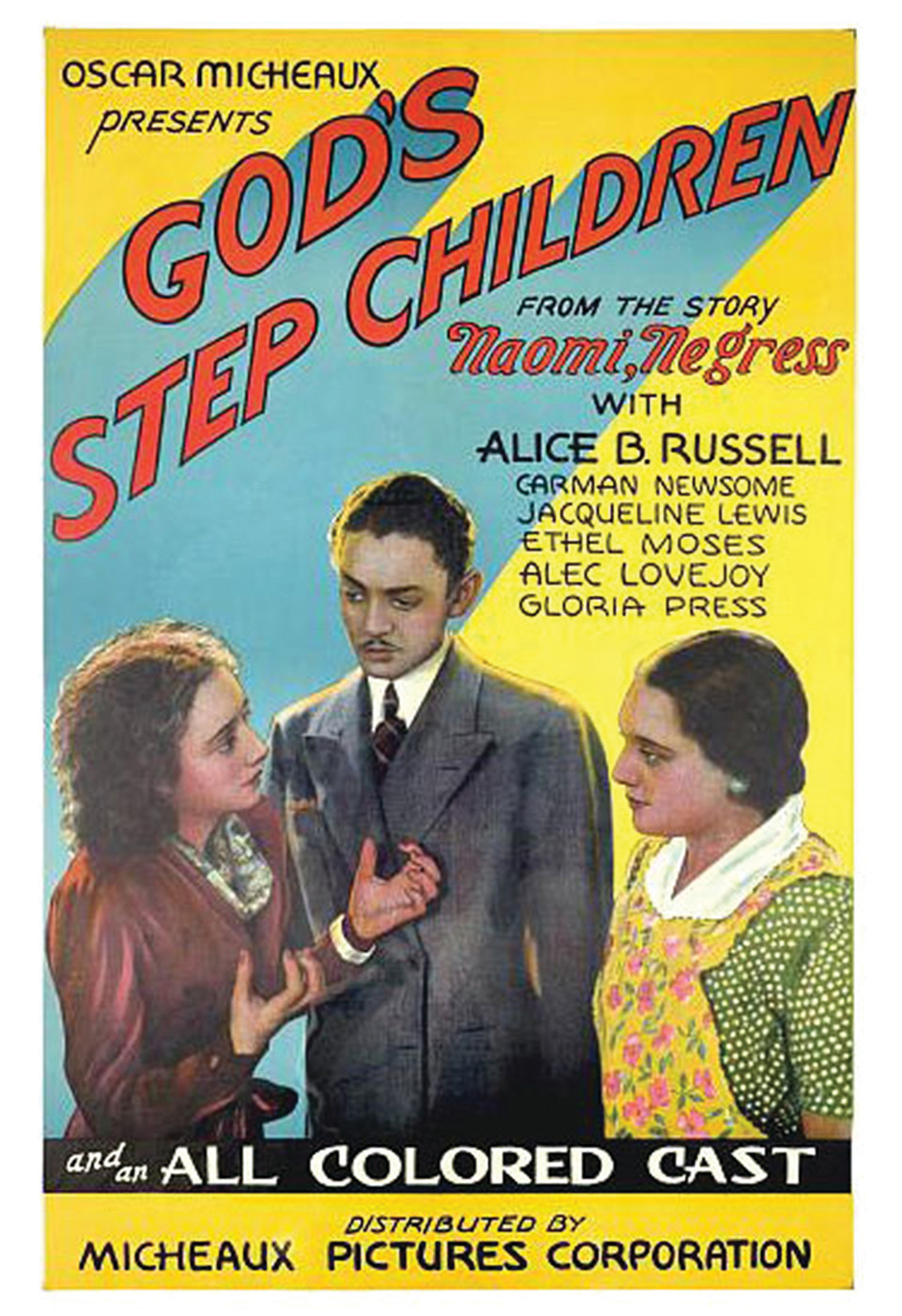 God’s Step Children (1938). Left in the care of a kindly widow when she was an infant, the light-skinned Naomi has grown up desiring to be white. When her insolence to her teachers at school earns her a spanking, she starts a malicious rumour that nearly tears the community apart, and results in her being sent to a convent. Returning to town years later, the now repentant Naomi (Gloria Press) confesses her love for her adoptive brother, the hard-working and upstanding Jimmie (Carman Newsome); but when Jimmie convinces her to marry his friend instead, Naomi’s repressed self-loathing emerges once again, tragically. J. Hoberman, on the occasion of the Whitney Museum’s Micheaux retrospective in 1984, singled out God’s Step Children as one of the director’s crowning achievements: “This nightmarish account of self-directed racism and misplaced mother love is the director’s anti-masterpiece, as profound and powerful an embodiment of American racial pathology as D.W. Griffith’s The Birth of a Nation or John Ford’s The Searchers.” 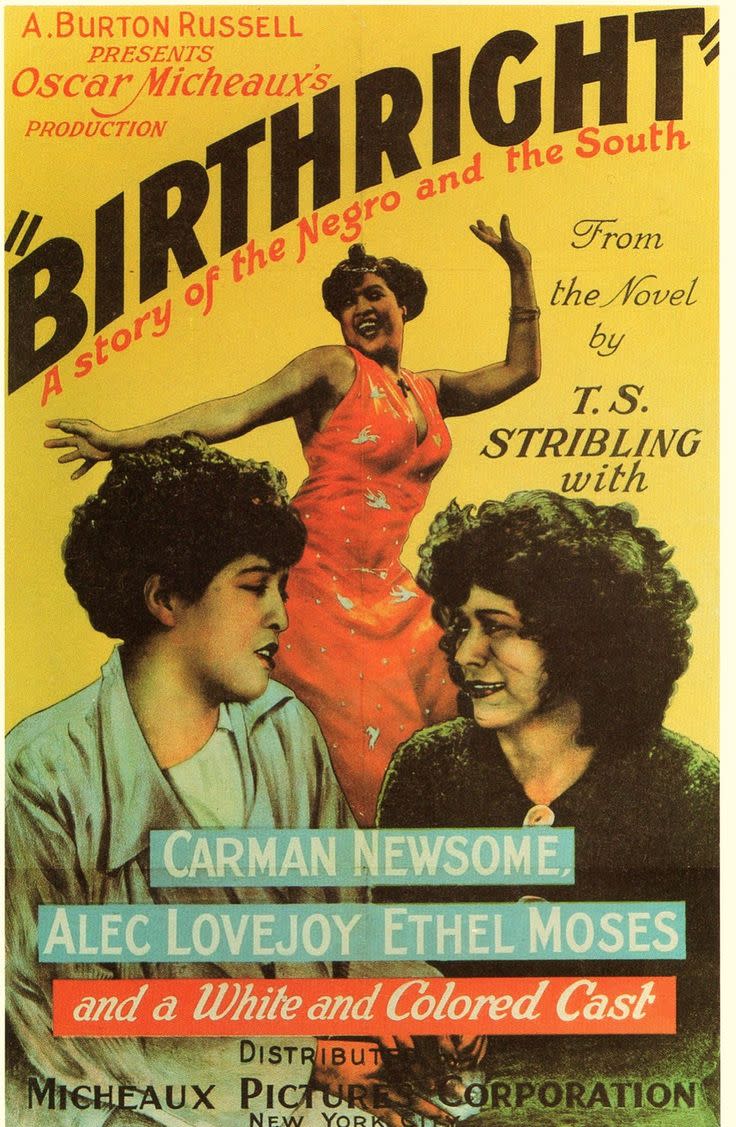 Birthright (1939). Arriving back in his small Southern hometown, a Harvard graduate sets out to build an educational institute for the town’s black citizens, but soon runs up against the opposition and antagonism not only of the hostile white establishment, but some of his own people. Micheaux’s second adaptation of the eponymous novel by T.S. Stribling following his 1924 silent version, Birthright is one of the director’s most incisive and critical films, searingly illustrating the dynamics by which oppressed peoples can become complicit in their own domination.