Med Hondo is the African Auteur You Need to See 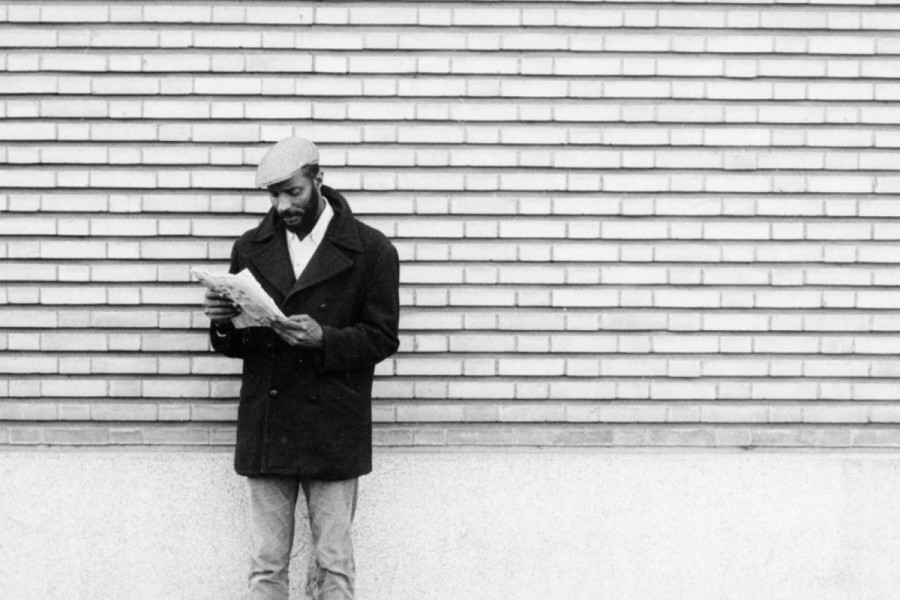 Med Hondo is the African Auteur You Need to See

African cinema visionary Abid Mohamed Medoun "Med" Hondo passed away Saturday morning at the age of 82. The following piece was originally published on August 1, 2016, as part of TIFF's retrospective The Indocile Image: The Cinema of Med Hondo.

Mohamed Abid Hondo, better known as Med Hondo, is one of the founding fathers of African cinema. Born to the son of farmers in the Atar region of Mauritania in 1936, Hondo later moved to Rabat, Morocco to pursue an education in hotel hospitality and quickly become a transplant in the former colonial nucleus of France.

Lowly jobs in Paris and Marseilles quickly taught the young man and his African counterparts that a college education didn’t mean much if the degree holders had darker skin. Out of this racism came his desire to pursue the dramatic arts. In 1966, Hondo helped to establish Shango, a black theatre group with a dream to cultivate an alternative choice for French audiences in contrast of the blinding white stage ecosystem. Despite the animosity shown to Shango, Hondo quickly adapted his creative palette to the camera, where his dream to reach a wider public was more attainable. Through acting in small roles in television and film (including a career as the go-to voice for the French-version dubbing for films, including The Lion King’s Rafiki, Morgan Freeman’s character in Se7en and “Donkey” in the Shrek franchise), he quickly learned the trade and began a renowned career behind the camera.

While the American film industry was suffering from a box office crisis in the 1960s, African cinema was solidifying its voice. By the early 1980s, Hondo was exalted as the most popular African filmmaker in exile, but today his filmography tends to remain in the shadow of his brethren. If one were to ask a Western cinephile to name some African auteurs, Ousmane Sembene, Djibril Diop Mambéty, Souleymane Cissé and Haile Gerima tend to ring a bell. Even contemporary filmmakers such as Cannes darlings Abderrahmane Sissako and Mahamat Saleh Haroun would be mentioned. Yet, to imagine an African cinematic Mount Rushmore without Med Hondo would be as sacrilegious as the monument itself.

Starting August 4, TIFF Bell Lightbox will hold a two-week retrospective titled The Indocile Image: The Cinema of Med Hondo. Many films will be introduced by the director himself. What unites his work is a sense of historical struggle, one that’s uniquely prescient today. Following the objectives of Third Cinema, which include critiquing capitalist power structures, colonial legacies and utilizing films to create a dialogue, Hondo’s body of work showcases the pioneering aesthetics of documentary-fiction hybrids, diasporic identity and cross-cultural inclusiveness. His films usually end ambiguously, while inciting a call for uprising. In a world where the Black Lives Matter movement has gained increasing importance (and burnt Bernie bros are ushering in a disillusioned taste of bipartisan government), the young Black diaspora is embracing racial solidarity and revolt like never before.

Movements of the past are informing the now. Political theories, pan-Africanism and influential figures of yesteryear are circling back into our collective imagination. Toronto’s Black queer leaders have established their agency at Pride through a historical activist context, 60 organizational affiliates alongside the Black Lives Matter coalition have demanded for the age-old case of reparations, community control power and destruction of mass incarceration, spearheaded by organizations such as the Black Panther Party. These are the outcomes that bore out of anti-imperialist struggles, Black power protests and of course, the filmmakers who dared to bring all of it to the big screen.

In this time of cultural awakening, it would be absolutely devastating to overlook the images of our celluloid past. In Aperture’s recent “Vision & Justice” issue, conversations about the impact of movies prompt producer Catherine Gund to ask a series of questions:

"How could a feature film have changed the world? This is not a hypothetical question. What was possible one hundred years ago, before all that has happened since in the United States, in Hollywood, in our streets, in our minds? What can be seen (and imagined) now? How can we turn witnessing into guiding? Can artistic representation manifest fairness? Can we actually use media to create the world we want to live in?”

These questions demand sincere and thoughtful answers. It’s impossible to pinpoint the psychological impact of any film on every person who has seen it. How could we know who has experienced positive change and empathy through the medium of film? However, these goals resonate with the intentions behind Hondo’s larger project: juxtaposing our current reality for a new vision of the future, a better world, a more just society.

Concrete moves are now being made after the firestorm that was #OscarSoWhite. Acknowledgment of representation as a viable means of self-projection in the arts is now being uplifted across the film industry. However, a retrospective of Med Hondo’s work offers another direction in the ongoing discourse. Instead of asking for a seat at the table, he flips the proverbial table over; the radicalism of his cinematic prowess is what separates the director from others and what makes this curation necessary in the greater cinematic context. In addition to the August retrospective being an incredibly rare look into the cinema of an underrated living legend, Med Hondo’s works aren’t available on any streaming service to date. (And good luck finding a DVD on eBay.) It’s also not available on home video formats including VHS, which has recently stopped manufacturing! He is not a Criterion-branded auteur, more like an outlaw.

Despite all the death and despair of this year, 2016 has simultaneously welcomed a neo-renaissance of Black film. Restorations of Julie Dash’s Daughters of the Dust, Cheryl Dunye’s lesbian classic, The Watermelon Woman, the black socialist alternative sci-fi utopian, Born in Flames, and Charles Burnett 1990 drama, To Sleep with Anger have emerged in a post-Lemonade landscape, just to name a few! With over six decades in film, the expertise and history that the now 80-year-old Hondo will bring to the introductions of The Indocile Image retrospective will be icing on the cake. His work embodies the revolutionary essence of the current political moment, boasting sharp imagery with thought-provoking realism. The Hondo canon is an invitation to witness the Afro-optimistic cinematic blueprint. 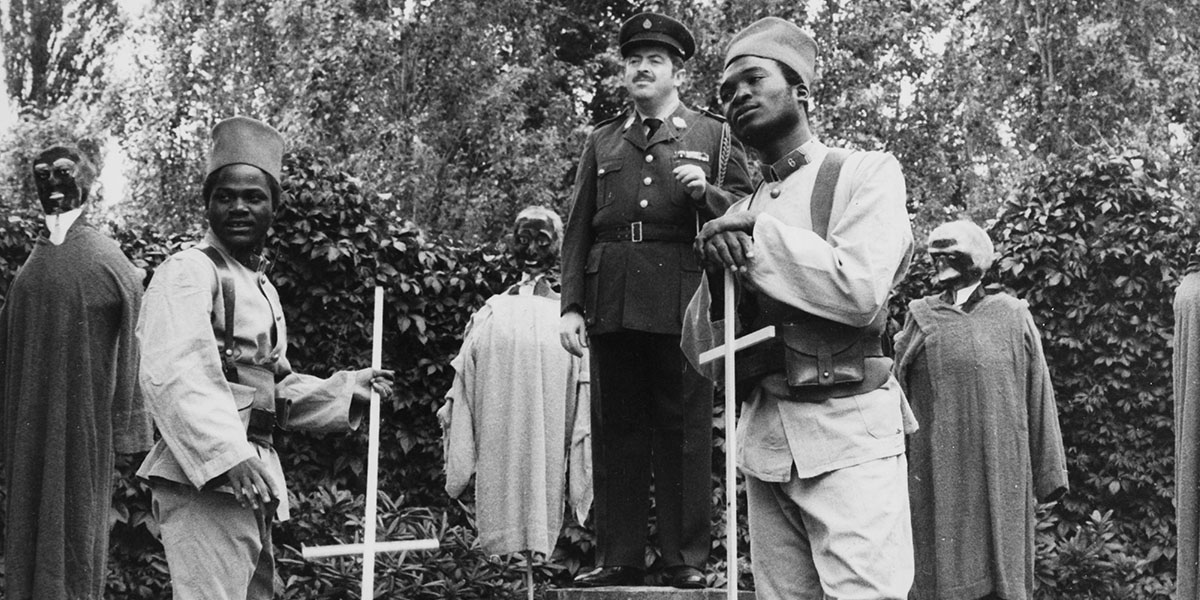 “But they’re the ones who colonized us!” “Don’t worry, we’ll colonize them right back.”

The directorial debut by Med Hondo was shot over a period of four years on a shoestring budget. Soleil O tells the story of a black immigrant who makes his way to Paris (sound familiar?) with dreams of economic prosperity, but is met with the stark reality of racial intolerance and blatant humiliation on “civilized” land. The protagonist, alongside fellow black immigrants, urgently seek employment and shelter in the heart of the politicized atmosphere of 1960s France. There, they begin a process of radicalization in the legacy of freedom fighters such as Patrice Lumumba and Malcolm X. Visualized through a series of vignettes and poetically ironic narration, Soleil O jumpstarted a underutilized sub-genre of dark comedy and in-your-face brutality, later capitalized by descendants such as Spike Lee. 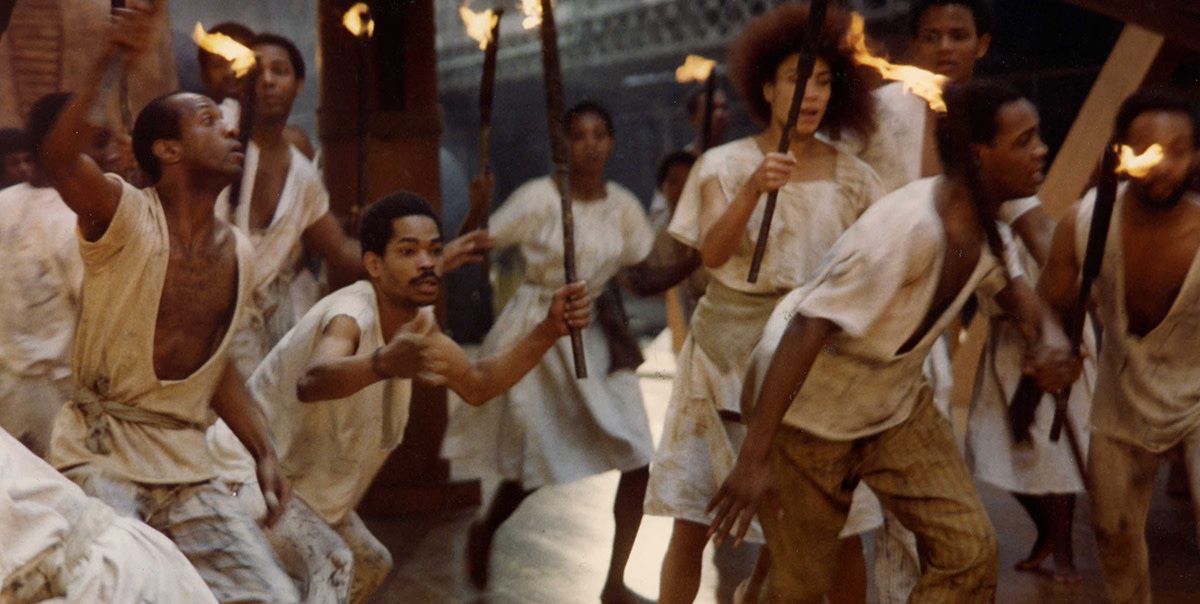 This Hondo epic has been out of circulation since its initial premiere release, solidifying it as a cinematic holy grail. West Indies was shot on a singular set with a beautifully lush musical lineage, tracing the West Indies through hundreds of years of French oppression. It was also the most expensive African film ever made at the time (now estimated at $1.35 million), a feat, considering how unusually difficult it was for African filmmakers to secure financing. In addition to Black art being easily consumed yet highly disposable, African auteurs had to deal with newly independent governments restricting their artistic funding in fear of a film critiquing emerging power structures and the leaders who held office. West Indies is a satirical Metro Goldwyn Mayer-inspired musical, based on European oppression. If that doesn’t prompt your interest, what will?

Genre bending is synonymous with Hondo’s iconography. Fatima, the Algerian Woman of Dakar, mixes comedy and drama with a fierce heroine as the title character. After a Senegalese officer rapes and impregnates a young woman in the aftermath of the late 1950s Algerian War, his father orders his son to seek reconciliation. He does so in the act of marriage. Meanwhile, Fatima has raised her mixed race son in utter bigotry, plagued by a stigma of her “lost purity” by patriarchal forces. Here, Hondo controversially explores themes of North and Sub-Saharan African racial tension whilst critiquing male bravado in a nuanced 16mm film.

African lore is chock full of powerful tales about women, from Queen Hatshepsut of Egypt, Yaa Asantewaa, the queen mother of the Ashanti Empire (or modern day Ghana), and even the Somali gender non-conforming legend, Queen Arawelo. Despite the rich folklore of our past, Sarraounia is one of the only films that exhibit the raw brilliance of our ancestors during a forgotten historical incident. A tale of magnificent resistance led by Queen Sarraounia in the face of impending French invasion, Hondo’s novel adaptation is cemented in large-scale battle scenes shot in outstanding widescreen format. Sarraounia, an African Queen is Hondo at his peak: inspiring and visually arresting. 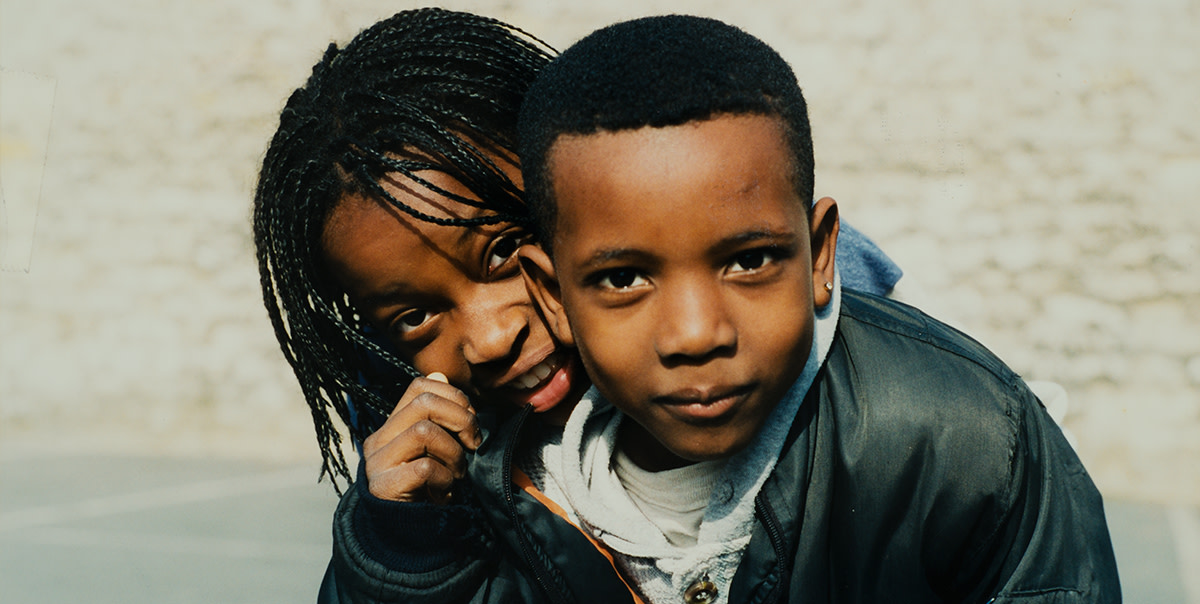 Picture this: two men lose their jobs on the same day in Paris. They happen to be a white bank executive and a Black garbage collector. Ironically shot in black-and-white, Watani displays the parallel life trajectories of two human beings. One, as he joins an ultra right wing organization and plans terrorists attacks, the other trying to carve an existence in the face of institutional racism and faces homelessness. With the rise of American presidential nominee, Donald Trump and post-Brexit explosion of hate mongering against minorities, Watani is unfortunately as timely as ever.