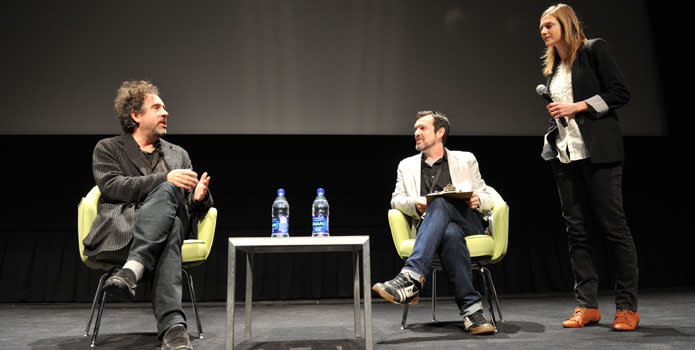 Director, producer, writer, animator, and artist Tim Burton joined post-secondary students and faculty to offer feedback on the work of animation students and to celebrate the medium of stop-motion animation.

To coincide with TIFF Bell Lightbox's inaugural exhibition Tim Burton, organized by MoMA, New York, Higher Learning invited the innovative, wonderfully creative, and celebrated artist for an intimate Master Class with post-secondary students and faculty. Six current or recently graduated animation students from a variety of Canadian colleges and universities were given the chance to present their short student films and to receive Burton's critiques, advice, and words of encouragement. Burton also discussed his early animation work, both as a student at the California Institute of the Arts (CalArts) and as an apprentice with Walt Disney Productions Animation Studios. Following the student presentations, Burton participated in a Q&A session with the Higher Learning audience. Other topics included: the medium of stop-motion animation – its suitability to particular modes of story-telling, as well as Burton's own love of the medium and his current commitment to it at a time when CGI dominates the animation field. This Higher Learning event was held on November 23, 2010 at TIFF Bell Lightbox.