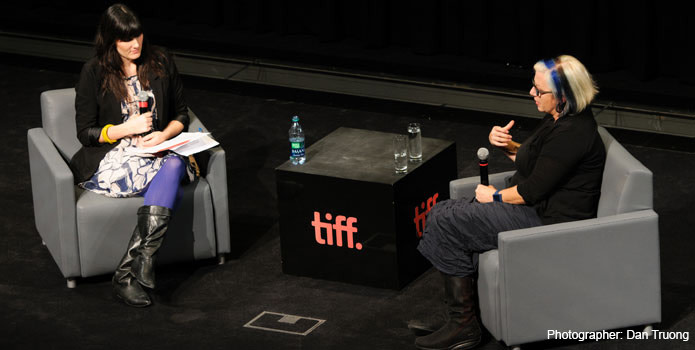 Susan Bradley, Film Title Designer for Pixar Animation Studios, joined post-secondary students and faculty to discuss her experiences working on live action films and those for Pixar, such as the Toy Story trilogy, Ratatouille, WALL•E, and Up.

An obsession with typography and visual metaphors led Susan Bradley down a twenty-year path in film & title design. She began in pre-digital film, with traditional photo-chemical optical effects at a post production house in Los Angeles, and was soon off to Walt Disney Studios for six years as lead title designer and manager of their Title Graphics division.

Bradley also discussed her extensive credits in live-action film title design, which saw her creations featured in both fiction film and documentaries. Other topics included: her entry into the title design field, the influence of Saul Bass and his lettering artist, Harold Adler, and the working relationship between directors, editors and title designers. This Higher Learning event was held on November 7, 2012 at TIFF Bell Lightbox.

The event was co-presented with The Association of Registered Graphic Designers of Ontario.