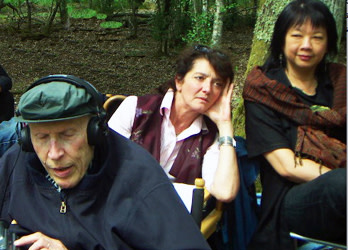 For a man whose career only really started to take off in his sixties, French New Wave Eric Rohmer was incredibly progressive. Not only are all his films provocative, charming and morally captiviating, uncompromising too in an age when French cinema was all too conventional, but so were his tactics as a filmmaker. Rohmer loved working with non-professional actors, casting unknowns who could be moulded into a perfect articulation of his signature dialogue and performance style. He also placed the same faith in his young, inexperienced crew.

*“As Eric’s collaborator and friend for over 35 years, it never ceases to amaze me to this day that the 'most' French of French directors, in terms of his devotion and love for France and French culture, as well as being an incredible ambassador for the French language, that this man didn’t hesitate to pluck a Chinese-Canadian student freshly disembarked from Montreal, out of thousands, to take up a key post in his filmmaking : as film editor and sometime co-composer.

Many label Eric as 'traditional,' 'moralistic,' 'classical' or 'conservative,' but just this action is already an avant-garde act. Not only did he not think twice about giving a key position in his crew to me, offering me a golden career subsequently, but was an unfailingly faithful friend taking care of all our daily woes. I’d like to remind everyone to learn from him and always keep a childlike curiosity when approaching life, never to consider anything as impossible with the excuses of 'I’m too old,' or 'I don’t have enough budget' or 'there won’t be an audience for this.' He had always said to me that if an artist (filmmaker) only follows what is fashionable, his/her work would fall out of fashion quickly; being true to one’s desires, one could stay universal and eternal (eternally young!)”*