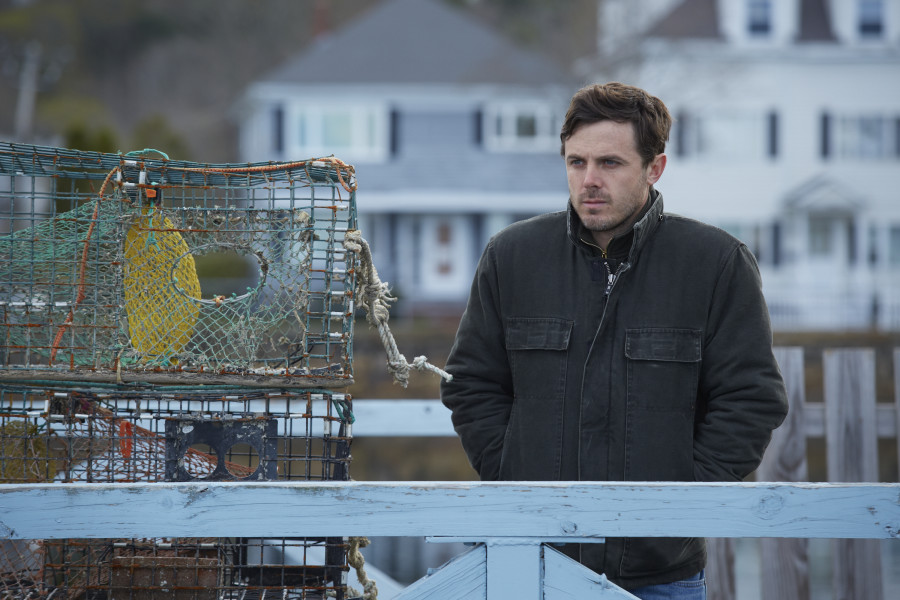 Manchester by the Sea’s Bruising Masculinity

Anguish is playwright/filmmaker Kenneth Lonergan’s raw material. In Manchester by the Sea (his much-anticipated third film, which played TIFF 16 and is now out in theatres), he spends two-and-a-half hours sculpting images of recessed sorrow from the lives of New England men, notably, the silent Lee Chandler (Casey Affleck). It is a small-scale story that feels as earthly as it is mythic.

Prior to this, Lonergan wrote and directed the tender brother/sister drama You Can Count On Me, and the ingenious coming-of-age epic, Margaret (completed in 2007 and released in 2011 after an arduous battle around its length). The latter, which starred Anna Paquin as a privileged young Upper West Sider involved in a bus accident, seemed boundless in its artistic scope and trajectory, full of endearing glitches that undermined the aesthetic control filmmaking provides. In spite of the comfortable world it lives in, Lonergan’s sensibility is forever human, and Margaret revelled in that paradox.

In 1996, Lonergan made his name with This Is Our Youth, a play about disaffected Reagan-era teens that caught the New York theatergoing public’s imagination. The New York Times praised it for showing “the real real world.” Proving itself to have a certain prescience even in its native moment, the play was remounted on Broadway in 2014 co-starring Tavi Gevinson, an interdisciplinary authority in her own right.

Now with Manchester, Lonergan is poised to be widely acknowledged as the auteur he is. More ambitious than You Can Count On Me and less daunting than Margaret, the film premiered at Sundance last January where it was fought over by five different studios who could all see it heading straight for awards season. Sustained masochism tends to win big, and few do it as well as Lonergan does. Yet, the pain that he favours — and he does favour it — is the kind born of trauma, rewriting his protagonists’ stories as they navigate time and all that fills it after the initial injury.

Here, the inciting event happens long before the story we see begins. Lonergan opens on the cold, choppy waters of family hubris: Lee (Casey Affleck) and his young nephew Patrick (Ben O’Brien) cutely roughhousing on the back of a lobster rig steered by Lee’s brother Joe (a shadowy Kyle Chandler). Facing the boy with mock sobriety, Lee asks: “If you could take one guy to an island with you, and you knew you’d be safe, because he’s the best man — that he was going to keep you happy. If it was between me and your father, who would you take?”

Shifting, at first indecipherably, to the present, the film traces Lee through the tough, repellent duties of being the janitor/handyman of four Boston apartment buildings. The pace is placid but brisk, Lee shifting through the backgrounds of his tenant’s lives, appeasing them to the best of his ability. Although tireless, Lee’s curt demeanour causes problems with both the tenants and his employer. Shrugging off the indignities of his job with something that looks like stoicism, Lonergan drops the first of several clues that Lee is hovering above an ocean of hurt that finds expression in brief bursts of physical violence.

In the midst of this routine, Lee receives a phone call that Joe is in the hospital. Leaving a message for his boss, he drives straight to Manchester-by-the-Sea, the coastal Massachusetts town where the extended Chandler family lives. Watching Lee drive towards the hospital, you see a man driving back into his past, though it’s unclear what exactly that means. His face doesn’t make it look fun.

I often imagine straight white men as unable to feel much beyond entitlement or performative self-loathing— just a casual streak of misandry that I rarely have reason to challenge in cinema. But Manchester by the Sea joins the ranks of outstanding work like Steve McQueen’s Shame, or Ray McKinnon’s Rectify in taking a character so overly familiar, so opaque, and finding meaning there. The leads in all these dramas are American, able-bodied, heterosexual white men of different classes, who, for different reasons, lapse on the privilege of their birthright. Following that line, Manchester by the Sea features male characters, in particular Lee and his now-teenaged nephew Patrick (an excellent Lucas Hedges), diminished and often brutalized by the covenant of masculinity; consumed by it from within. 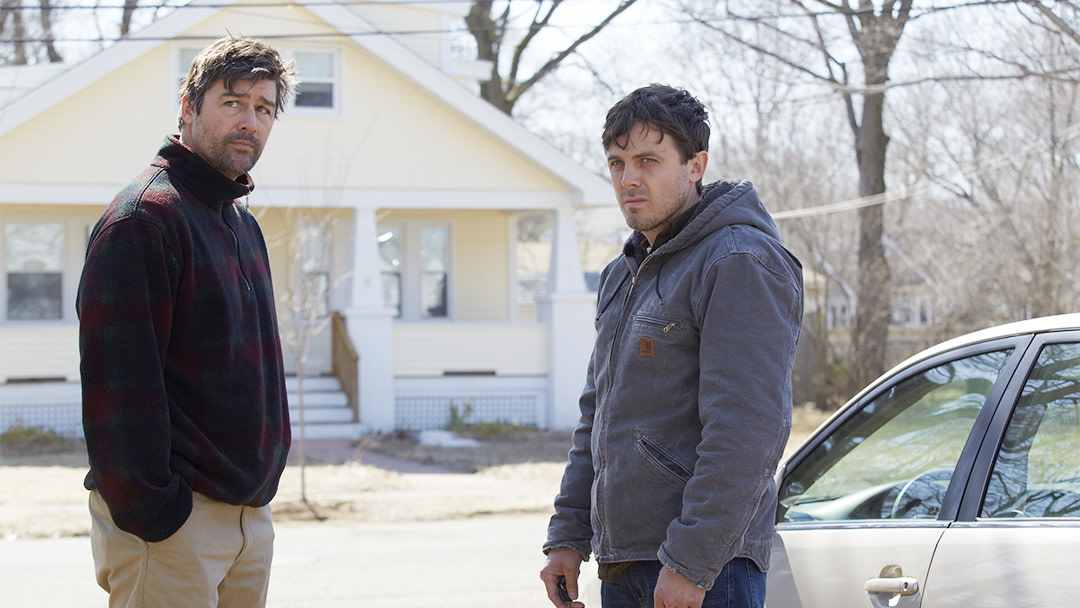 In a 2012 interview with Lonergan, New Yorker film critic Richard Brody wrote (then, of Margaret) that “Lonergan wants to see the very nature of society, to observe the doings in one place as in a documentary, evoking, through local, limited, and intimate views, the very vastness of human existence.” Manchester, too, finds a universe within a seemingly homogenous set of lives. It's not just a movie about unhappy white people; it's about how pain and the management of it is a defining factor of every identity. Still, the intimate, local view that Brody observes is both limited and limiting, the vastness of the characters’ lives existing internally, if not externally.

Imbued with a dramatist’s gaze, Manchester feels theatrical in its tendency to place behavior at a slight distance, often preferring flattened proscenium-like shots. Lee’s basement apartment has the appearance of a small stage set, with its high window framing a trembling pink flower outside; feet and ankles passing by the foggy pane. But with a slight pull backward at a key moment, Lonergan reimagines it as a cell. It’s a profound mix of what theatre shows, augmented by what a camera does.

The camera also shows, without hesitation, all that’s brought Lee to his current state, a spoiler so spoilery I’ll just say it’s a thing. Affleck’s entire performance is one of indelible gravity, with the kind of silent, self-immolating characterization typically attributed to an actor like Ryan Gosling. But Affleck doesn’t strain under the burden of subdued charisma as Gosling often does. Lee is a man who, having gone to hell and back, lives in an endless psychic flinch. It is credible to the extent that I felt ashamed for having witnessed some of his most private moments. 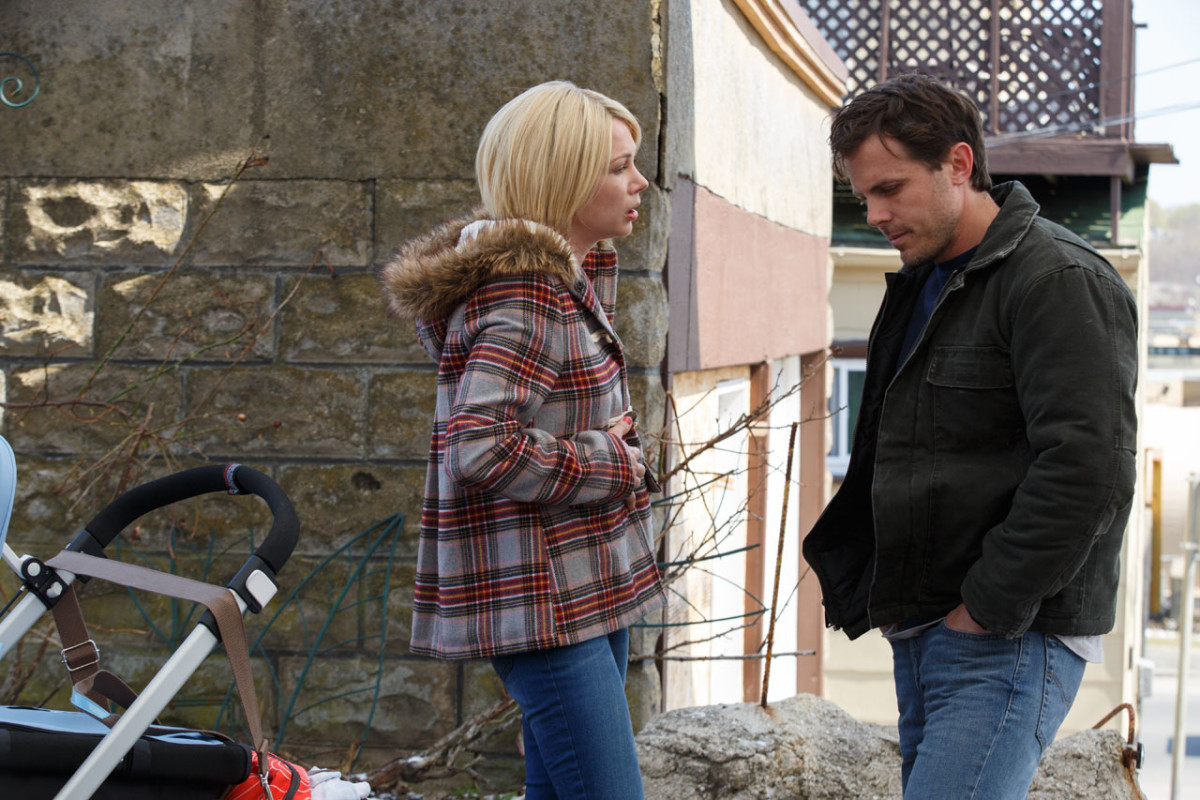 Lee can’t access his pain, being both stricken and anaesthetized by it. Bumping into his ex-wife Randi (Michelle Williams) near the end of the film, she names her feelings with a self-awareness that feels shocking within a community of characters unable to make conscious emotional actions. Williams, whose many gifts as an actor include channelling eloquent torment, remarks that she knows Lee shares her hurt, to which Lee replies: “There’s nothing there.” What he can’t see, Lonergan makes cleanly visible to us. Randi can access her pain, which has allowed her to move on (to a degree) from their shared trauma. Lee simply cannot, and the slight shake of his head as he confesses his absence is pure devastation.

Lonergan, with his ability to make a world that is realer than real, finds tragedy in Lee’s myth of the best man, invoked on the deck of his brother’s boat. But from there, he etches a beginning towards something, possibly better.