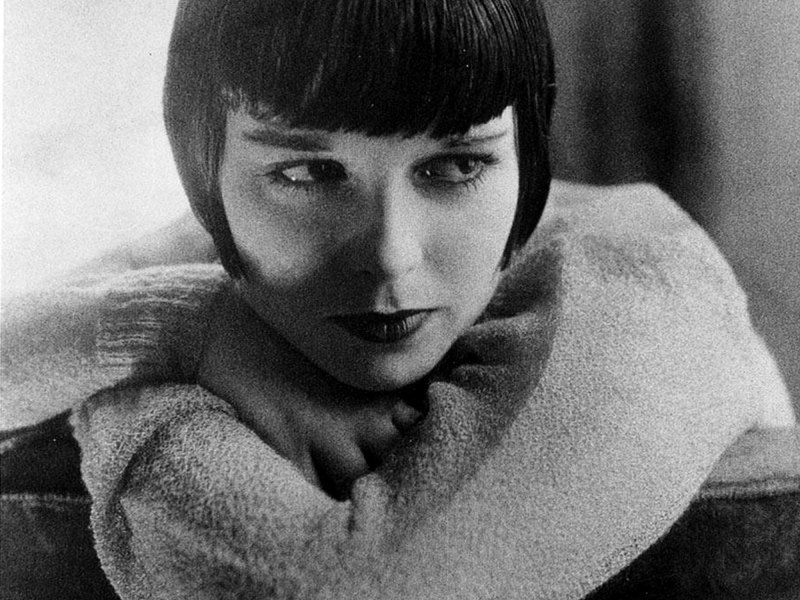 To mark International Women’s Day and celebrate the tremendous success of TIFF’s initiative Share Her Journey — a five-year commitment to increasing opportunities for women in the film industry, which has already raised a remarkable $971,000 that will directly support new programming aimed at tackling gender parity head-on — we are proud to collect and present all the entries in this ongoing series by programmer Alicia Fletcher about the trailblazing women of silent cinema.

One of the most recognizable faces (and haircuts) of the silent era, Louise Brooks was a force to be reckoned with both on and off the screen. Nicknamed “The Girl with the Black Helmet” — a moniker derived from her distinctive bobbed ’do — Brooks went from Hollywood contract player to international icon when she decamped to Germany to play the innocent temptress Lulu in G.W. Pabst’s Pandora’s Box (1929), a role (and a performance) that has left an indelible mark on both film and cultural history. Beyond the innumerable references to her signature look (of which you can observe some examples below), it was Brooks’ unruly spirit and multifaceted, even paradoxical persona — sex symbol and intellectual, cultured cosmopolitan and down-home American, mainstream and avant-garde — that has allowed her legend to persist. 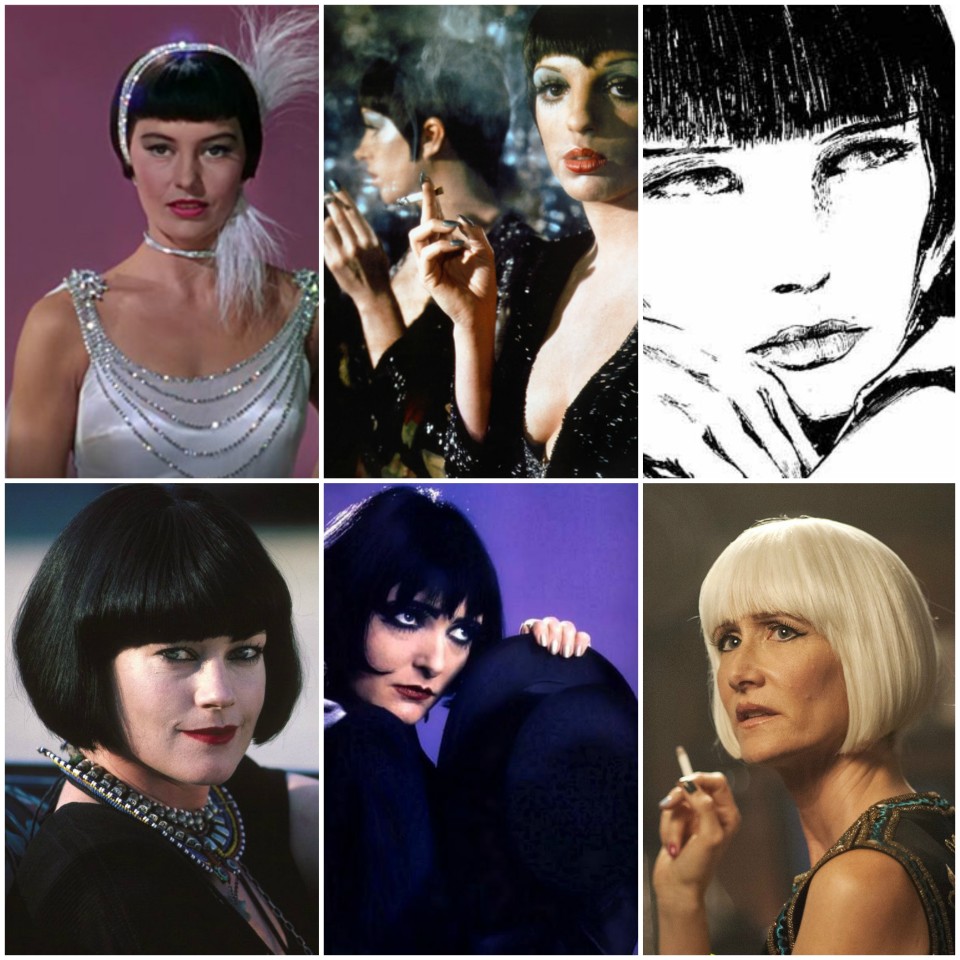 Born in Cherryvale, Kansas, Brooks captivated audiences with her dance talents from an early age. In the early 1920s, the 16-year-old Brooks joined Los Angeles’ famed Denishawn Dance Company, her compatriots including the legendary Martha Graham. Brooks’ impressive skill and distinctive look (her iconic bob can be traced back to her schooldays) got her noticed by George White, who cast her in his blockbuster Broadway revue Scandals. She later made an indelible appearance with the Ziegfeld Follies — during which time she had a brief but intense affair with Charlie Chaplin — which got her noticed by Hollywood, and by 1925 she was appearing in a series of flapper-friendly comedies which made her a favourite of film-fan magazines.

Irresistible yet intractable, bold, brash, and brilliant, Brooks was a natural rebel, making her an ill fit for the tightly controlled Hollywood studio system, which was designed to limit stars’ power. In the late 1920s, after scoring a number of box-office successes for Paramount — including Beggars of Life (1928), in which she plays a tomboy orphan who hits the road with footloose hobo Richard Arlen — Brooks bluntly told studio head B.P. Schulberg to “fuck off” when he refused her a modest raise, and then promptly headed to Europe, against the studio’s strict orders to stay put. It was here that she had her fateful meeting with Pabst, who cast her as his Lulu — choosing Brooks over a young Marlene Dietrich, one year away from her own international breakout in Josef von Sternberg’s The Blue Angel — in the succès de scandale of Pandora’s Box. 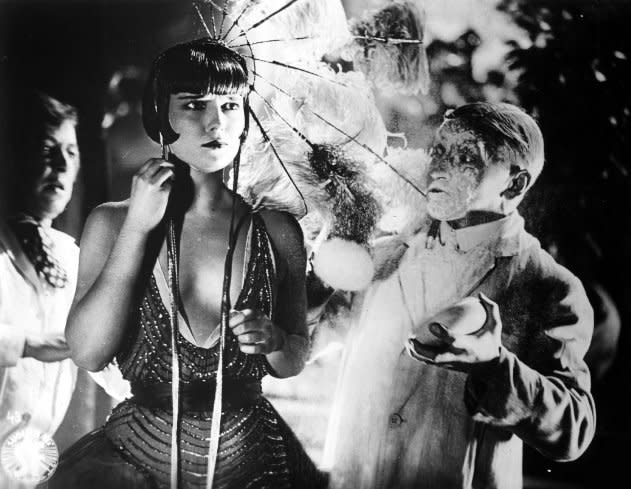 Pandora, along with Brooks and Pabst’s immediate follow-up Diary of a Lost Girl, channelled Brooks’ talents in a way that Hollywood never could. The more progressive and liberated atmosphere of European cinema gave full rein to Brooks’ natural onscreen eroticism, while offscreen, the girl from Kansas found a social circle of artists and intellectuals that stimulated her keen intelligence and nascent literary talents. Brooks made one more film in Europe — Prix de beauté (a.k.a. Miss Europe, 1930), shot in France (in both silent and sound versions) with Italian director Augusto Genina — before she returned to the US.

Although she was back in Hollywood, Brooks proved to be even more rebellious towards her studio bosses than she had been before her sojourn on the Continent. When she refused to return to work to shoot new sound sequences for the silent-shot production of The Canary Murder Case (1929), Paramount had her role dubbed by Margaret Livingston (who had previously played the seductive "Woman from the City" in F.W. Murnau's 1928 masterpiece Sunrise) and blacklisted Brooks, marking the beginning of the end of her film career. Brooks’ Beggars of Life director William Wellman (whom the actress had often clashed with) then offered her the female lead opposite James Cagney in The Public Enemy (1931), but she turned it down, preferring to spend time with her lover George Preston Marshall (long-time owner of the NFL’s Washington Redskins) in New York; the role went instead to newcomer Jean Harlow, whose star began its meteoric rise as Brooks’ was precipitously falling. By 1937, Brooks was finally on the outs with Hollywood. Bankrupt, she moved back to Wichita for a stint (where her homecoming was apparently not exactly warm), and then to New York, where she wound up working in the shoe department at Saks Fifth Avenue while her taste for luxury was supplemented by a series of wealthy male suitors (or “clients,” depending on whose account you believe).

By the mid-1950s Brooks was destitute, and her always problematic drinking had begun to take a marked toll on her health. It was at this low point, however, that the actress’ rediscovery began, as well as the remarkable final stage of her professional life. James Card, the establishing film curator at the Eastman Museum in Rochester, New York, and Henri Langlois, the legendary founder of the Cinémathèque française, had begun to resurrect and champion Brooks’ screen legacy, programming retrospectives of her films at their respective venues, publishing essays on her, and carefully locating and preserving prints of her films. (Langlois once famously remarked “There is no Garbo. There is no Dietrich. There is only Louise Brooks.”) Locating Brooks in NYC, Card convinced her to move to Rochester, where she would stay for nearly 30 years until her death in 1985 at the age of 78.

In Rochester, with Card’s help and encouragement, Brooks embarked on a new career as a film historian and critic, writing her remembrances and analyses of the old days of Hollywood Babylon in Sight & Sound, Film Comment, and several other notable film journals. In 1982, Brooks’ writings were compiled and published as Lulu in Hollywood, which remains one of the most fascinating, well-written and expertly researched accounts of Hollywood filmmaking in the 1920s and ’30s.

In addition to being a methodical and talented writer, Brooks was a voracious reader and an avid correspondent. Holed up in her small Rochester apartment, she would answer letters from her admirers and her European circle of supporters (Langlois, his partner Mary Meerson, the German film historian Lotte Eisner), and grant interviews to historians researching the silent era. Correspondence from Brooks is scattered throughout private and public collections: the Eastman Museum inherited her collection of journals and letters upon her death (the present author digitized a portion of this collection for the museum in 2011), and TIFF’s own Film Reference Library houses more than 125 letters written by Brooks over a period of 20 years to Gerald Pratley, the founder of the Ontario Film Institute (the forerunner of TIFF Cinematheque) and CBC’s first film critic. Sifting through these letters — some of which are handwritten but most of which are typed out, then annotated in a second round of proofing by Brooks with her distinctive scrawl — is fascinating, both for their content and for what they reveal about the remarkable complexity and agility of Brooks’ mind: sometimes she would refute or add a second layer of meaning to what she had typed with her handwritten notes. 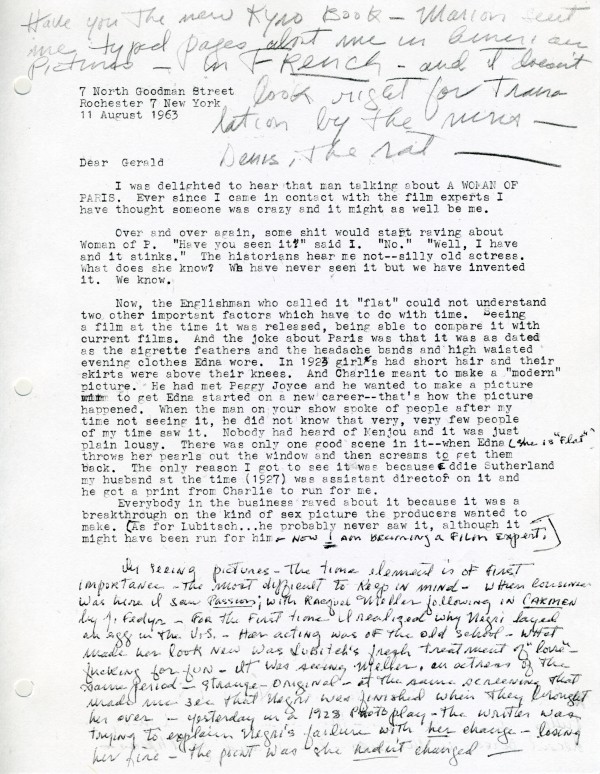 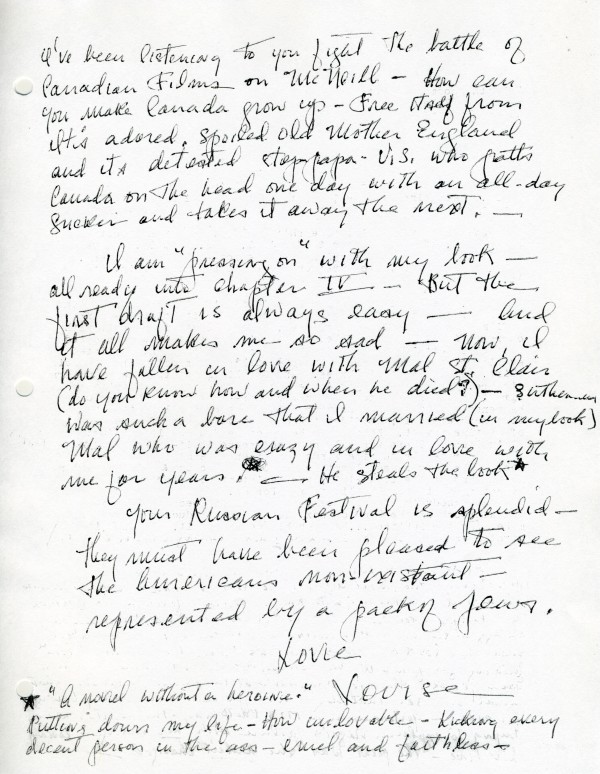 Pratley’s correspondence with Brooks began in the autumn of 1961, after Brooks had apparently snubbed him when they met in some professional capacity; as Brooks wrote in that first letter, “You didn’t like me and I don’t blame you. For more than 25 years I bore the scorn and pity of ‘Poor Dear Stupid Failure’ and when some dribbles of acclaim did come my way at last, they came too late…But my opinion of you was soon corrected by my discovery of CBC.” 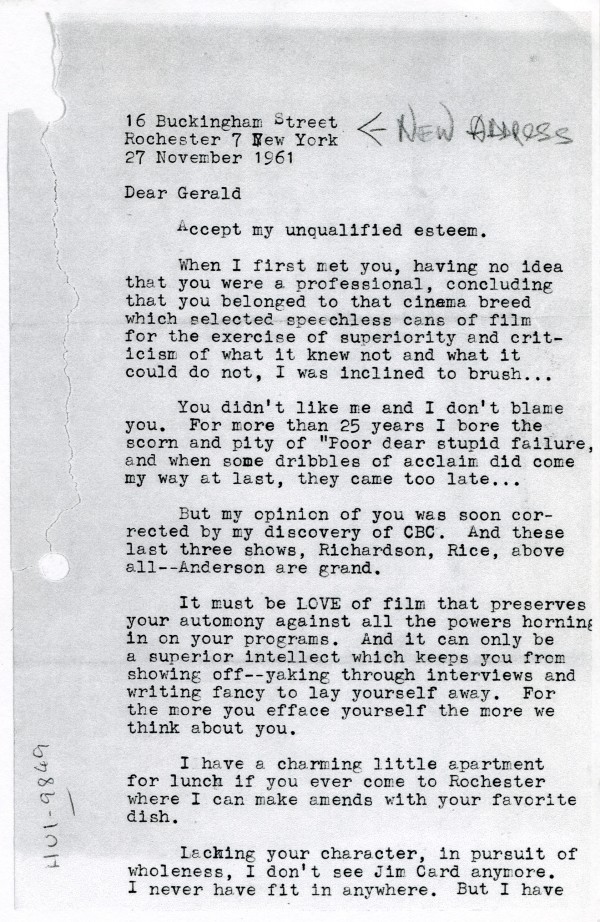 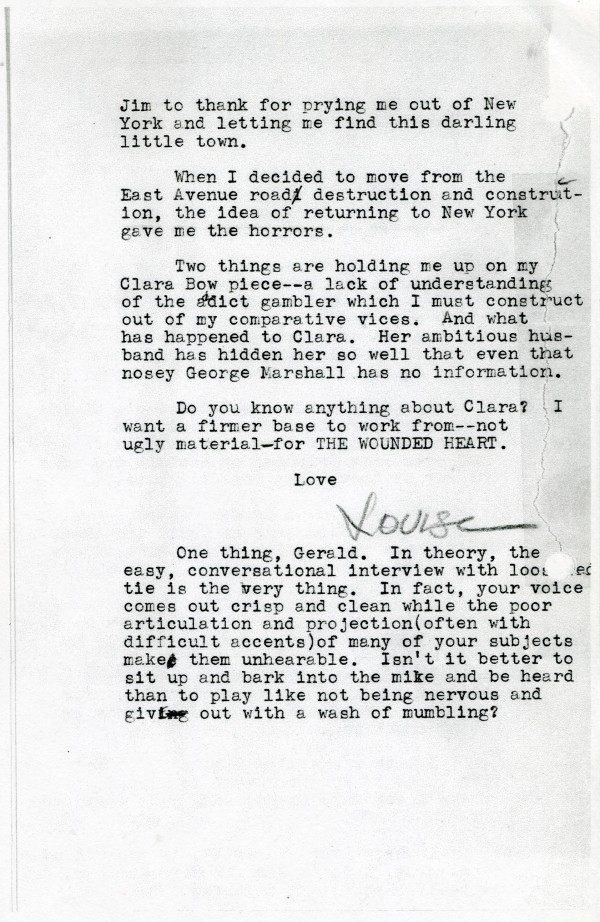 For the next two decades Brooks and Pratley were regular correspondents and intellectual confidants. Pratley would come to visit Brooks in Rochester, where she would arrange a cocktail hour at her apartment; Brooks would diligently listen to Pratley’s CBC radio shows, sending him notes on what she liked (she liked most of it, which was unusual for her), and what she thought was “bullshit.” Brooks sent Pratley versions of her early writings, such as her article on Clara Bow, and Pratley encouraged her to publish her autobiography, even providing her with contacts from Prentice-Hall; instead, she threw the manuscript, which was to have been called Naked on My Goat (a title borrowed from Goethe), into the fire. Pratley also sent her the manuscripts for what would become his monographs on Otto Preminger and Canadian cinema, which she was highly receptive to — although she had some choice words on that latter subject, declaring in a November 1962 letter that Canadians “do not warm any corner of my heart. I don’t believe in Canadians. They come to the States or go to London and then become Americans or Englishmen.” (Nevertheless, she was not above asking Pratley to send her some good “Canadian cheddar” with her usual delivery of English biscuits and tins of loose leaf tea.) 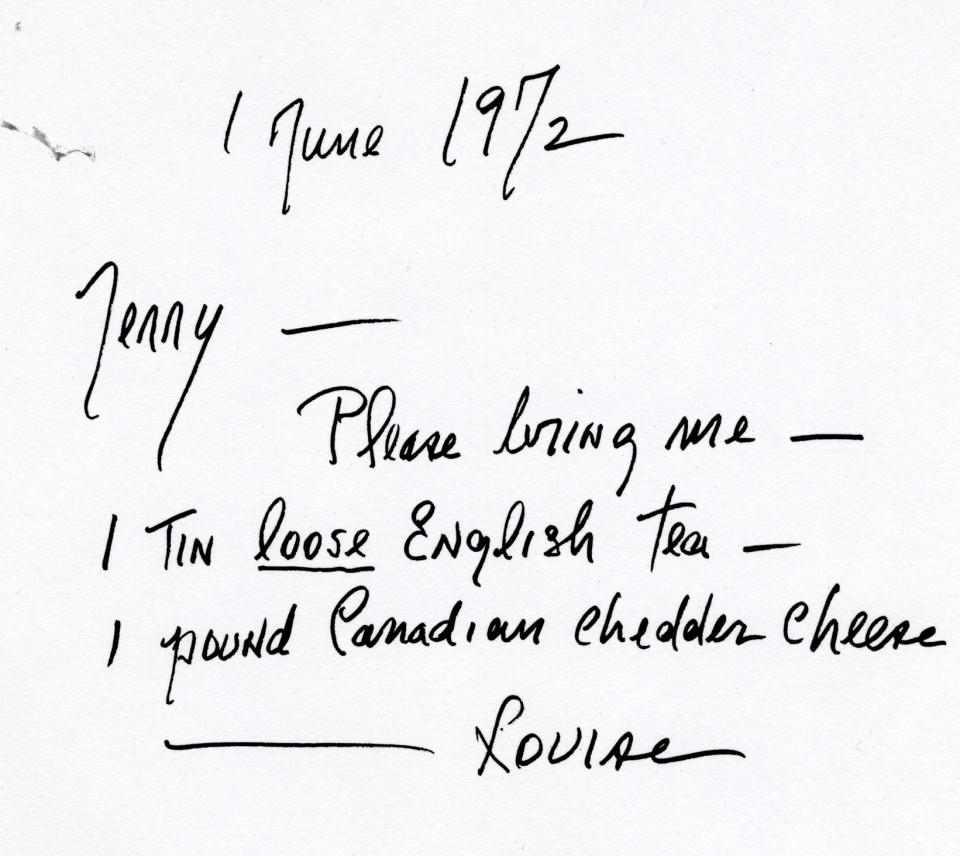 As the above indicates, to be close to Brooks — even as a pen pal — required a tough skin. She could be brutal in her judgements and was unrestrained in her criticisms, even of those who were closest to her. This prickliness eventually served to make Brooks’ relationship with her original benefactor James Card highly difficult, if not downright toxic: she eventually became convinced that Card was out to get her, and subsequently refused to speak to him and demanded that her “things” — the film stills, research notes, and other material that she had donated to the Eastman Museum — be returned. Brooks’ letters to Pratley are full of these accusations, along with a host of other conspiracy theories (Langlois taking over MoMA, Montreal curators conspiring with Card to cut Brooks out of a Pabst retro, etc.). But for film-preservation nerds, the real juicy gossip in the letters concerns the former star’s active participation in the emerging preservation movement: for example, Brooks wrote to Pratley when MoMA, with the aid of Langlois and Card, discovered a print of Howard Hawks’ A Girl in Every Port (1928), which Brooks had starred in and which was thought to have perished in a Paramount vault fire. 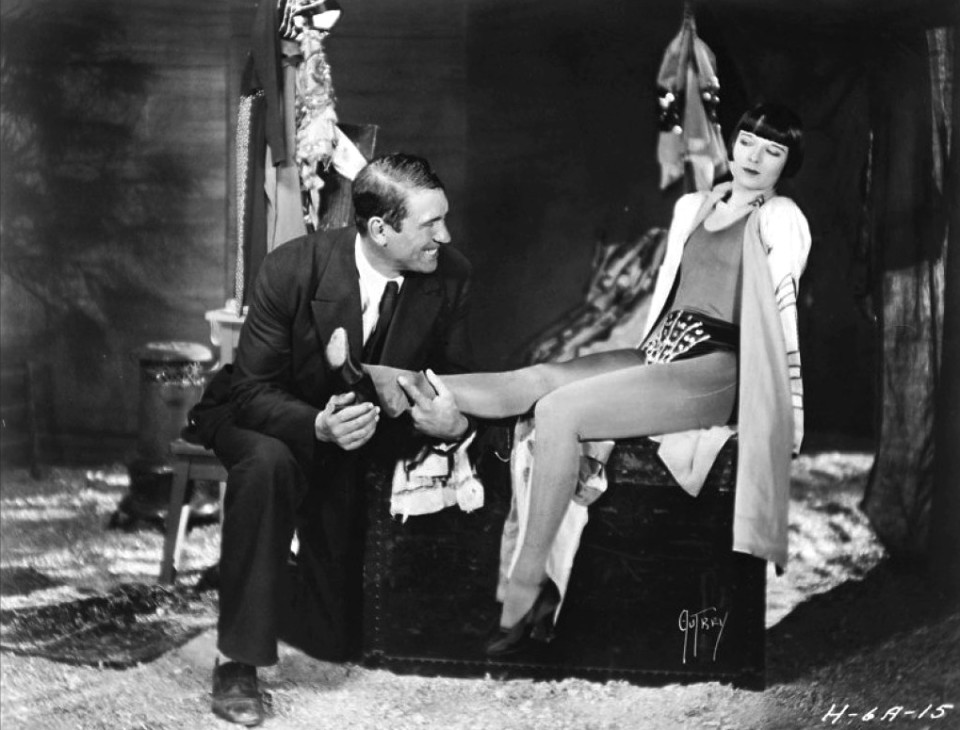 The letters to Pratley began to dwindle in the late 1970s as Brooks’ health declined further, but it would appear that Pratley stuck with the cantankerous and belligerent Brooks after others had fled, unable to bear the abuse. In 1978, she sent him a handwritten valentine decorated in felt pen, which read “It has been my habit to wait thirty years before declaring my love to my rare and remarkable friends, but time is running out and you are my only truly Funny Valentine.” 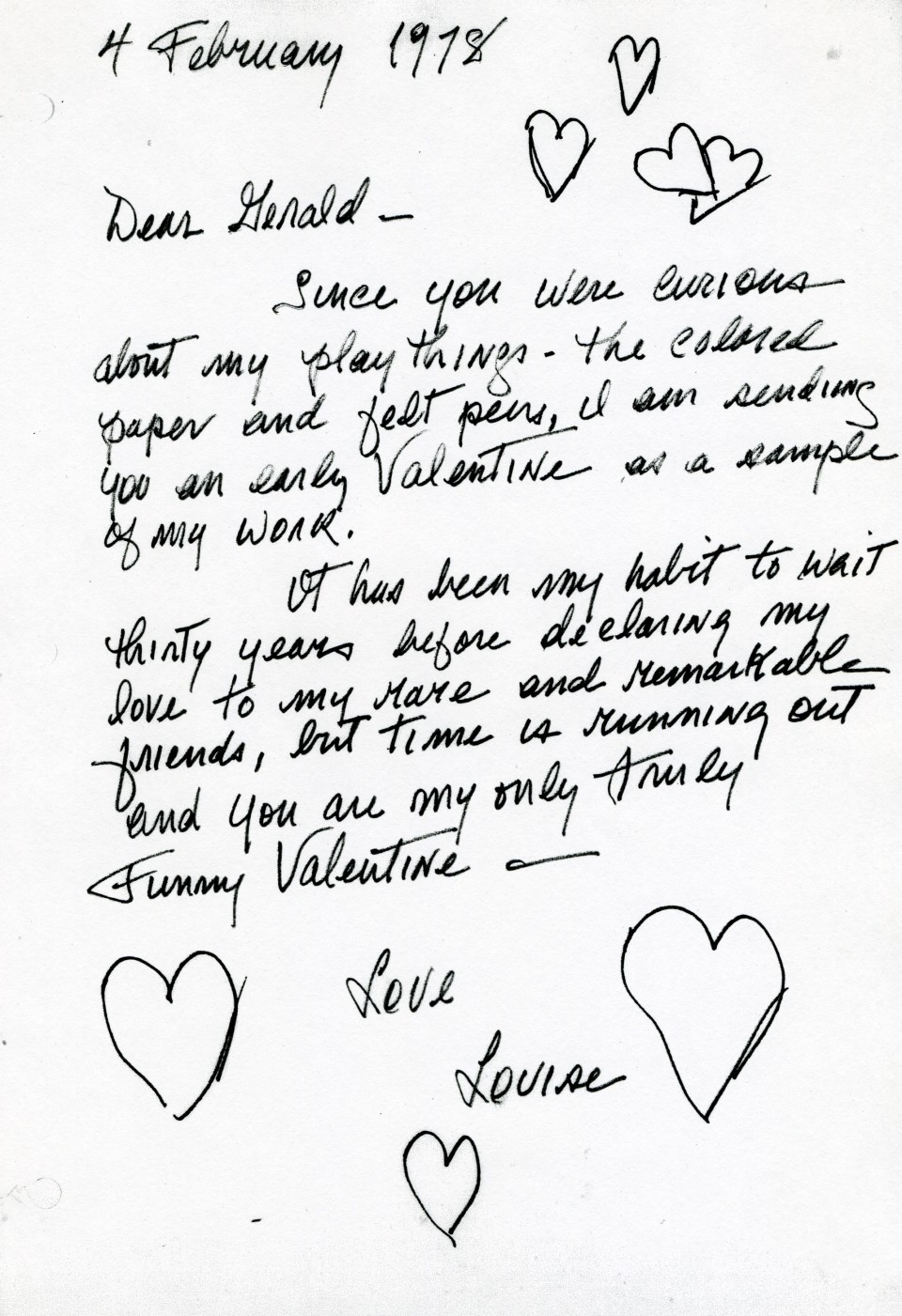 The Pratley-Brooks letters are not only tell the tale of a special friendship: they are an invaluable record of the kind of "scholarly exchange" between film scholars and the film professionals who had seen both the dawn and demise of the classic silent-film era, one which was pivotal to writing the pioneering histories of silent cinema.

Share Her Journey
You’re invited to send a meaningful message of support and encouragement to the women directors of TIFF 2021 as they get ready to share their films with the world.
Send a message
close