Before she packed heat in The Night of the Hunter, the screen legend helped give birth to the movies as we know them 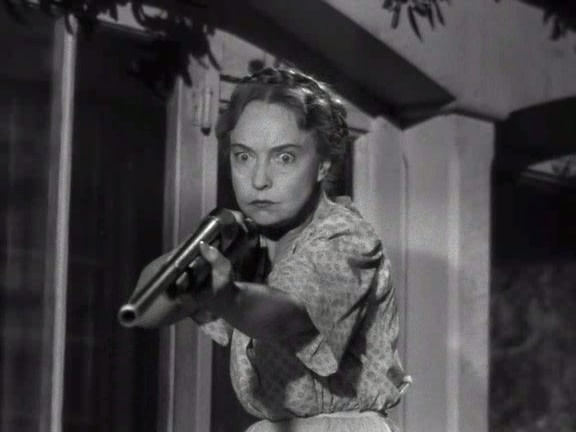 To mark International Women’s Day and celebrate the tremendous success of TIFF’s initiative Share Her Journey — a five-year commitment to increasing opportunities for women in the film industry, which as of January 2019 has raised a remarkable $2.2 million to directly support new programming aimed at tackling gender parity — here's another look at programmer Alicia Fletcher's invaluable series of essays about the trailblazing women of silent cinema. Find more links below to brush up on legends Nell Shipman, Louise Brooks, and Dorothy Arzner.

While preparing to direct his first — and, as it turned out, only — film, The Night of the Hunter, the great actor Charles Laughton set out to evoke the silent-film Americana of the cinema pioneer D.W. Griffith — right down to casting Griffith’s great star Lillian Gish as Rachel Cooper, the saintly old spinster who protects the little fugitives John and Pearl (Billy Chapin and Sally Jane Bruce) from their demonic stepfather, the sermon-singing, switchblade-wielding preacher Harry Powell (Robert Mitchum). Standing guard over her brood as Powell lurks outside, Rachel recalls an earlier incarnation of Gish, the “Eternal Mother” keeping watch over the cradle of History in Griffith’s Intolerance (1916) — though as part of his devilish twisting of this silent-film iconography, Laughton here kits Gish out with a shotgun. 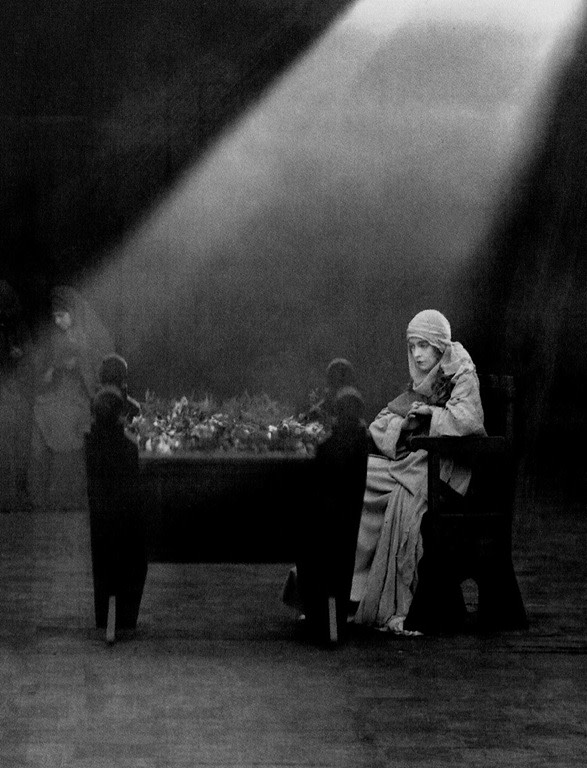 Lillian Gish as the "Eternal Mother" in Intolerance 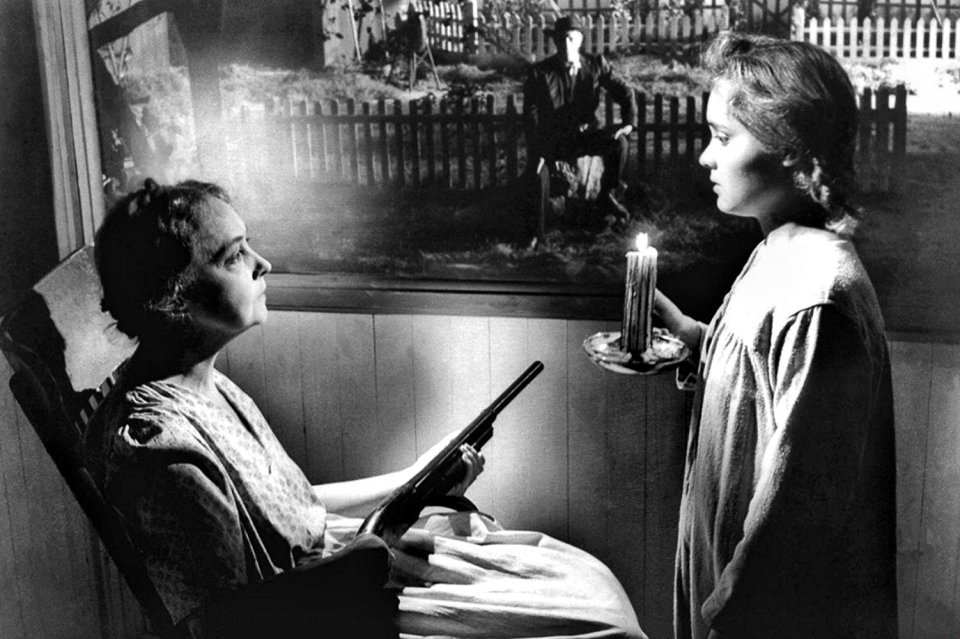 Fron left: Lillian Gish, Robert Mitchum and Sally Jane Bruce in The Night of the Hunter

If you opened any trade or fan magazine in the 1910s, you would have encountered Gish’s pursed lips and ringlets of light curls, that ethereal, wispy presence that was as uncanny a century ago as it is now. Along with her compatriot (and lifelong friend) Mary Pickford, Gish was one of the first bona fide Hollywood celebrities — and in fact, her screen stardom predated the very concept of “Hollywood” itself, stretching back to her debut, alongside her sister Dorothy, in Griffith’s New Jersey-shot thriller An Unseen Enemy (1912). 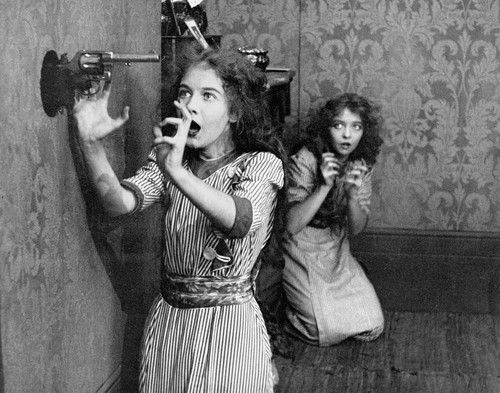 Lillian and Dorothy Gish in An Unseen Enemy

At a time when motion pictures were still thought of as a licentious, amoral fad that would corrupt the youth and the ever-susceptible “lower classes,” Gish soon became extolled as the greatest actress of the new medium of “the flickers” and helped to legitimize motion pictures as a medium worthy of respect and serious cultural attention. Every aspect of her life was obsessively detailed in early movie magazines, from her tips on flower arrangements to her patented recipe for egg salad sandwiches. 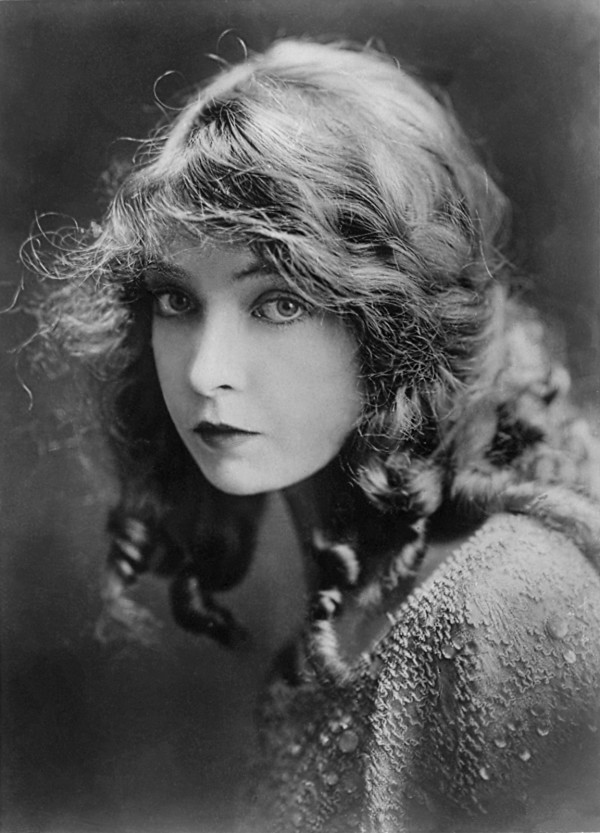 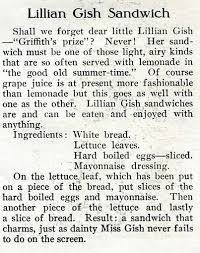 Yet by the end of the 1920s, Gish had come to be regarded as out of date, a relic of an earlier era — or, as actress and spirit-of-the-age Louise Brooks bluntly put it, a “silly, sexless antique.” Eclipsed as MGM’s top star by Greta Garbo and unable to make much of an impression in the talkies with her first two sound efforts One Romantic Night (1930) and His Double Life (1933), the one-time idol of the fan magazines was now being dismissed with such mean-spirited headlines as “What Ever Happened to Lillian Gish?”

Gish was born in 1893 in Springfield, Ohio. Her alcoholic father eventually abandoned the family, and Gish’s mother Mary took up acting to support Lillian and her younger sister Dorothy. The girls soon followed their mother onto the stage, and by the time the family moved to New York in 1910 Lillian and Dorothy were seasoned veterans of theatrical touring companies. 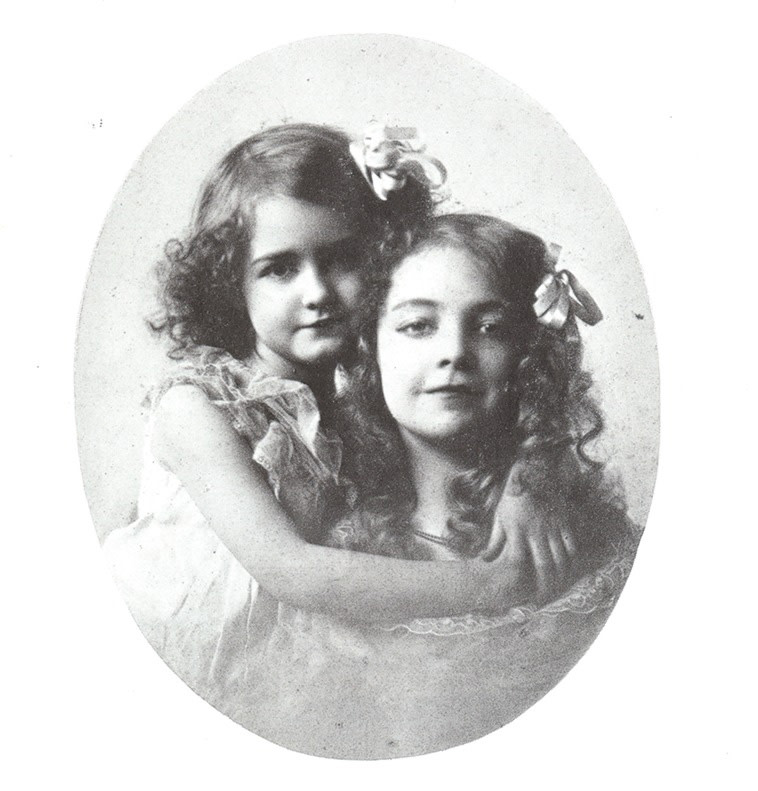 Dorothy and Lillian Gish in the early 1900s

In New York the Gish sisters became fast friends with their neighbour Gladys Smith, another child actress who had adopted the stage name of Mary Pickford. Since 1909, Gladys had been appearing in numerous films for the NY-based Biograph Company after being discovered by director D.W. Griffith. In these days prior to the era of the star system, actors were typically not credited on the films in which they appeared, with popular performers generally being identified by the names of their studios: the Canadian-born Florence Lawrence, who is often referred to as “the first movie star” and became the first actor to be identified on screen under her own name, was first christened “The Biograph Girl” and then, following her move to Carl Laemmle’s company Independent Moving Pictures, “The IMP Girl.” With Lawrence’s success and the subsequent popularity of the new “Biograph Girl” Pickford, studios came to realize that marketing the personalities of their stars was key to box-office success. 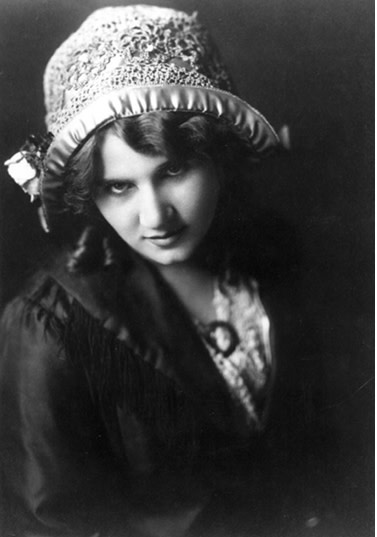 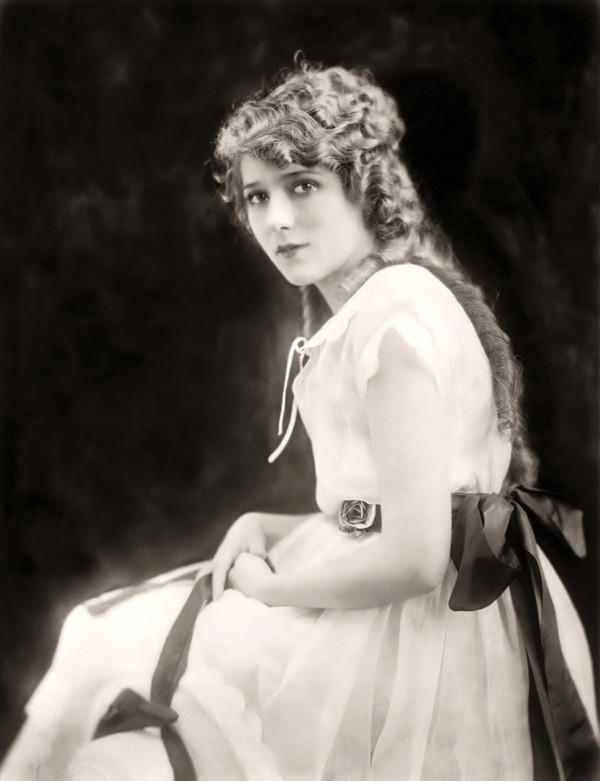 It was at this crucial stage in film history that Gish was introduced to Griffith by Pickford, sparking one of the most legendary collaborations of the silent era. Beginning with An Unseen Enemy, Gish appeared in more than a dozen Biograph-produced, Griffith-directed one-reelers, often with Dorothy as her co-star. With her leading role in Griffith’s epic feature The Birth of a Nation (1915), Gish was launched to the very forefront of screen stardom and the new frontier of full-length feature filmmaking — and while it is impossible to divorce this landmark film from the racist, hate-mongering ideology that fuels it, Gish’s moving and nuanced performance remains a remarkable accomplishment of screen acting. 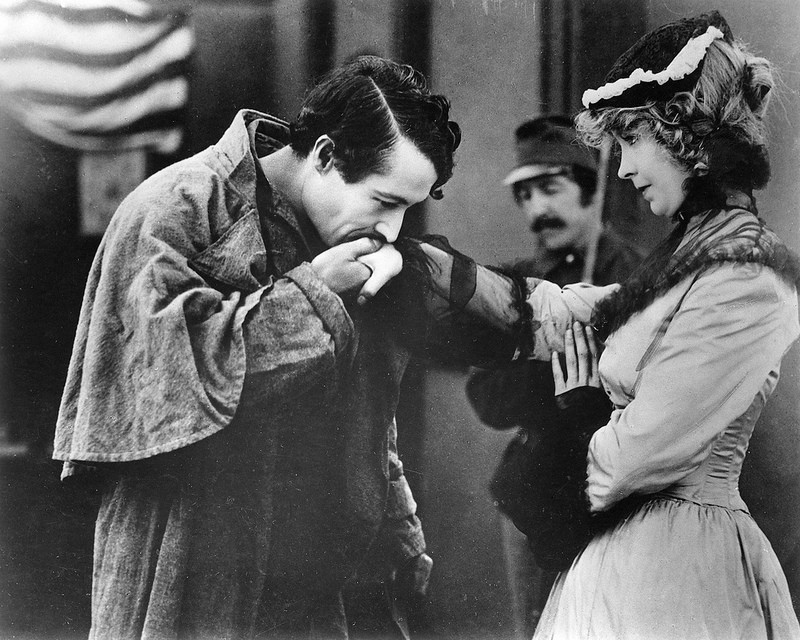 Henry B. Walthall and Lillian Gish in The Birth of a Nation

From her very beginnings in An Unseen Enemy (where she and her sister are menaced by a gun-waving domestic) through her rescue at the valiant hands of the Ku Klux Klan in The Birth of a Nation and on into the majority of her major features, Gish excelled at being imperilled on screen, whether from human cruelty, withering illness, the forces of nature, or the tides of history. In Broken Blossoms (1919), another of Griffith’s quasi-apologies for the race-baiting repugnance of Birth (following the aforementioned epic Intolerance), Gish plays the much-abused daughter of a down-and-out boxer whose chaste love affair with a young Chinese scholar (played in yellowface by Richard Barthelmess) unsurprisingly ends in tragedy. 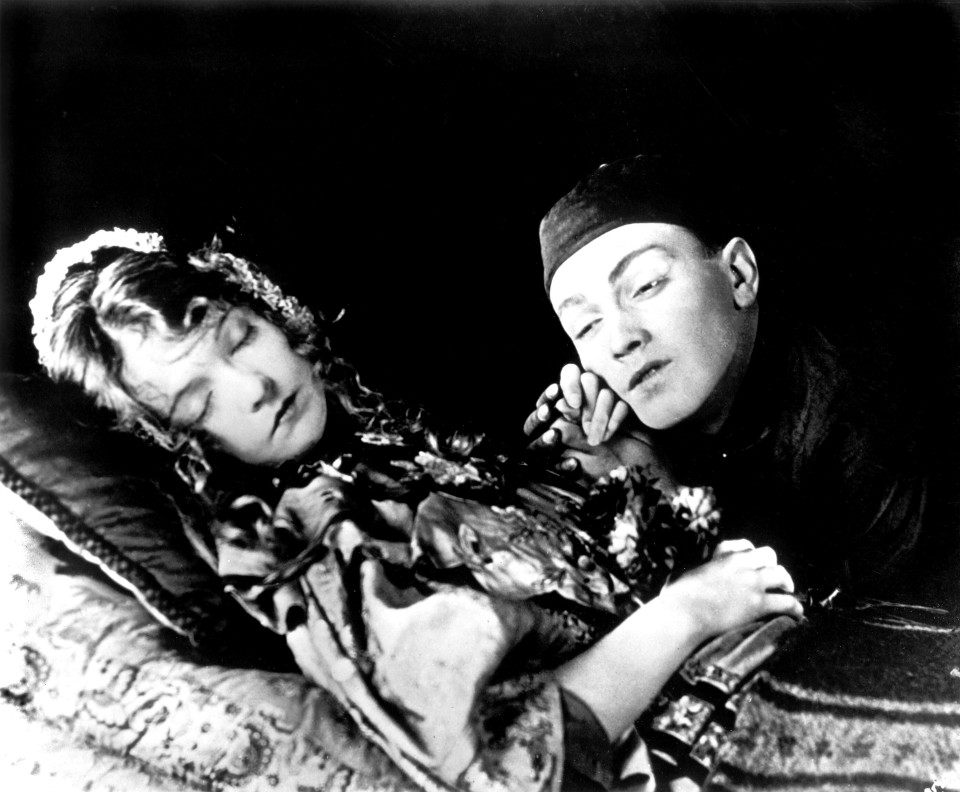 In Hearts of the World (1918) and Orphans of the Storm (1921) she is buffetted by the horrors of World War I and the French Revolution, respectively; in La Bohème (1926), she is Puccini’s doomed, consumptive heroine Mimi, and in The Scarlet Letter (1926) Hawthorne’s much-put-upon Hester Prynne; while in The Wind (1928), a desert sirocco threatens to literally blow her waifish self away. 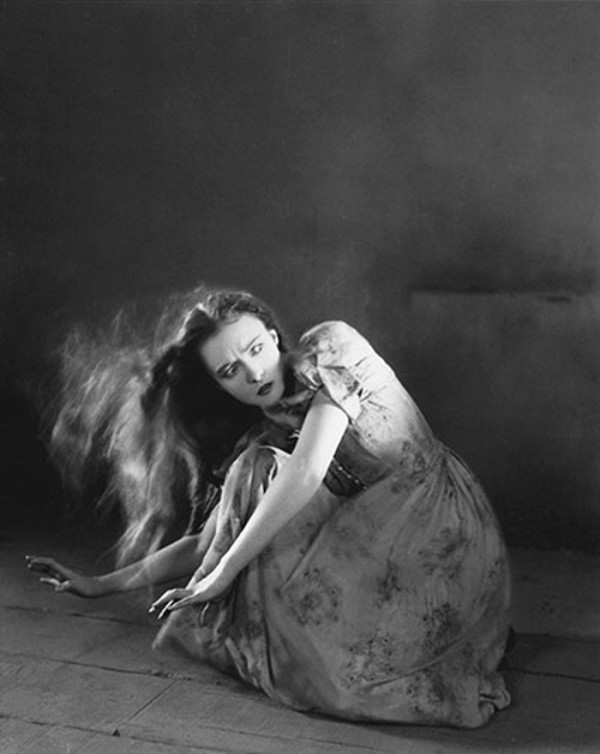 Gish in peril: The Wind (left), Way Down East (right) 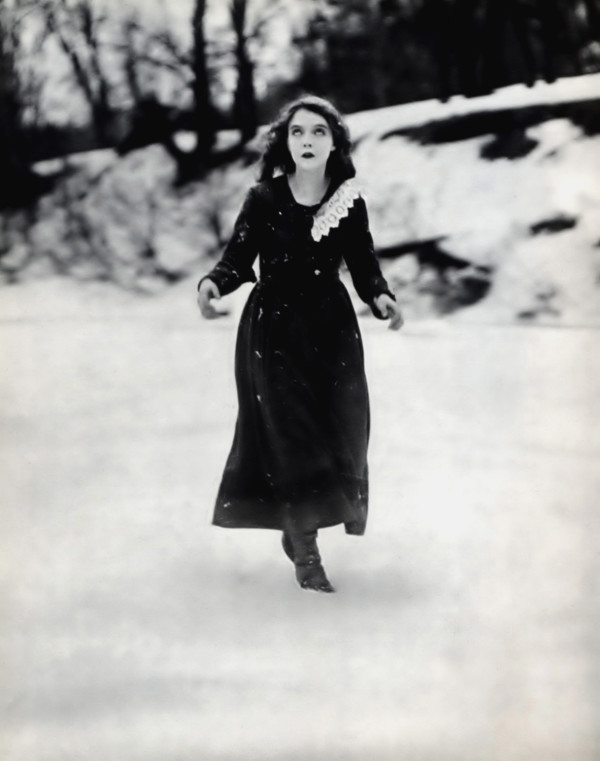 However, Gish’s onscreen fragility was the result of real-life grit: despite having nearly succumbed to the flu pandemic of 1918, Gish would frequently subject her body to considerable physical punishment in order to lend credibility to her characters’ sufferings. For the unforgettable conclusion of Way Down East (1920), Gish floated perilously down a river while perched on an ice floe, trailing her hand in the frigid water in order to make the situation even more impactful — a bit of proto-Method acting that resulted in permanent nerve damage. On the shoot of The Wind in the Mojave Desert, Gish insisted on the utmost authenticity, including filming in the midst of sandstorms; at one point she suffered third-degree burns on her hands from a car door handle which had become white hot in the blazing desert heat. 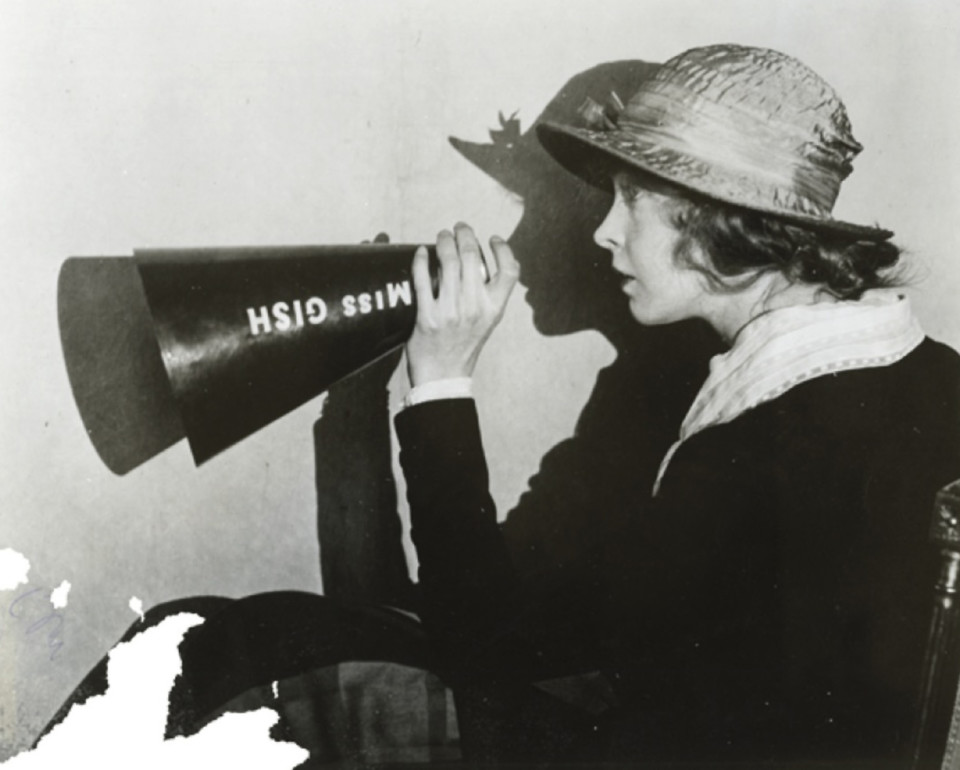 Gish’s determination extended beyond the realm of performance: like other major female stars of the silent era such as Pickford, Nell Shipman and Musidora, she also branched out to exert greater creative control over her films. In 1920 she stepped behind the camera to try her hand at directing for the first time. Based on Gish’s own scenario, produced by Griffith and shot in Mamaroneck, New York at newly established studio facilities whose construction Gish herself had supervised, Remodelling Her Husband starred Dorothy Gish and her then husband James Rennie in a story about a devoted housewife whose philandering husband continually goes out on the town with younger women; reinventing herself, the wife leaves her husband and goes to work for her father’s company, to great success.

While the now-lost Remodelling Her Husband proved to be Gish’s only directorial outing, the six-film deal that the actress signed with MGM in 1925 gave her a remarkable amount of input into all aspects of her productions. Most notably, she convinced MGM head Louis B. Mayer to produce both The Scarlet Letter and The Wind, and to bring the great Swedish filmmaker Victor Sjöström to the US to serve as her director. 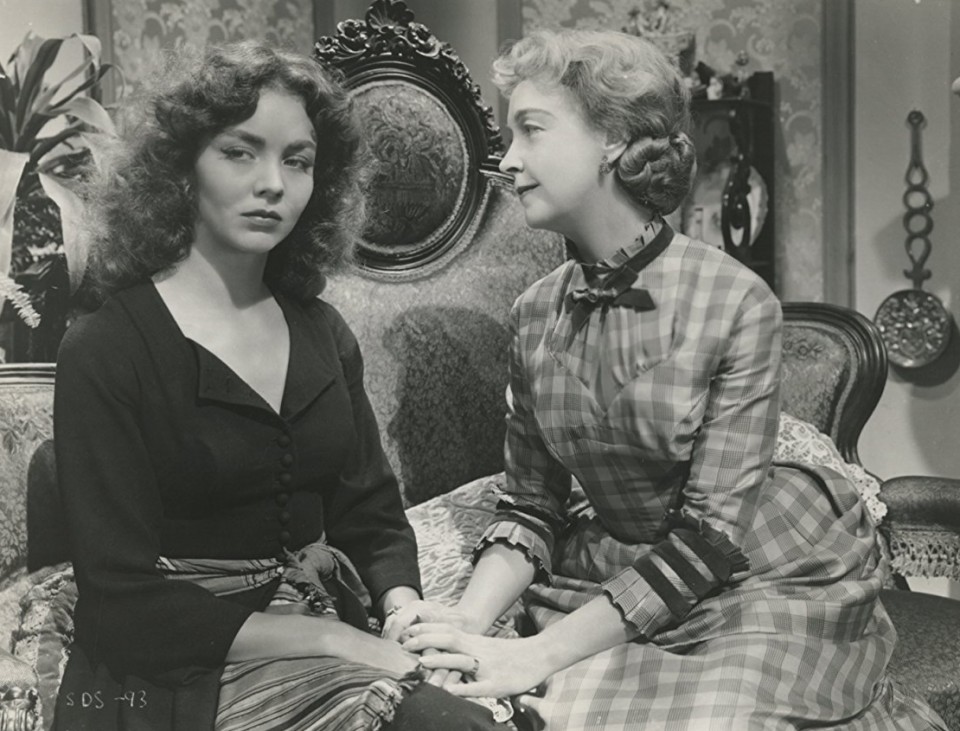 Jennifer Jones and Lillian Gish in Duel in the Sun

When her film career fizzled in the ’30s, Gish returned to the stage with great success. In 1946 she reunited with her La Bohème director King Vidor for the epic western Duel in the Sun, for which she received an Oscar nomination as Best Supporting Actress, and thereafter appeared regularly on television and intermittently in the odd higher-profile picture, including William Dieterle’s Portrait of Jennie (1948), Vincente Minnelli’s The Cobweb (1955), and John Huston’s The Unforgiven (1960). She played her final film role at the age of 94 in Lindsay Anderson’s The Whales of August (1987) — in which she co-starred opposite another screen legend, Bette Davis — and passed away in 1993, just five months shy of her centenary. 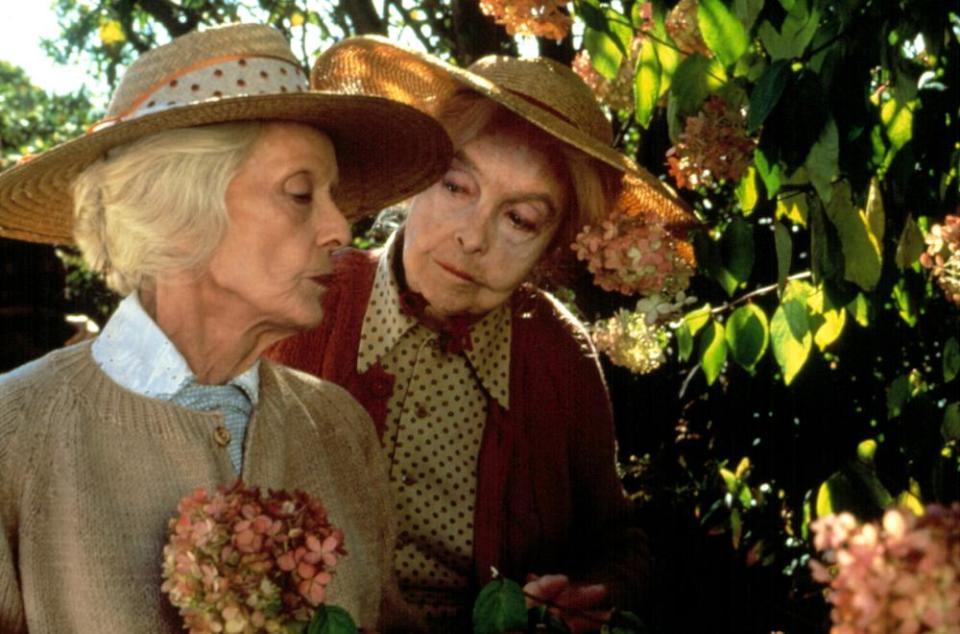 Bette Davis and Lillian Gish in The Whales of August

Despite Louise Brooks’ caustic comments, there was little that was old-fashioned about Gish; rather, her eight-decade career evinces a determination to remain relevant. Unlike Mary Pickford, who kept her films out of circulation for fear of being laughed at, Gish was an outspoken champion of silent cinema. Furthermore, upon her death she bequeathed a portion of her estate to establish the annual Dorothy and Lillian Gish Prize, one of the most prestigious — and, at $250,000, one of the most valuable — arts awards in the United States. The range of recipients since the prize’s establishment in 1994 — including Frank Gehry, Ingmar Bergman, Bob Dylan, Ornette Coleman, Peter Sellars, Laurie Anderson and Chinua Achebe — further attests to Gish’s unyielding belief that “the flickers,” and the artists who create them, rightfully belong in the company of the highest art forms of the century.