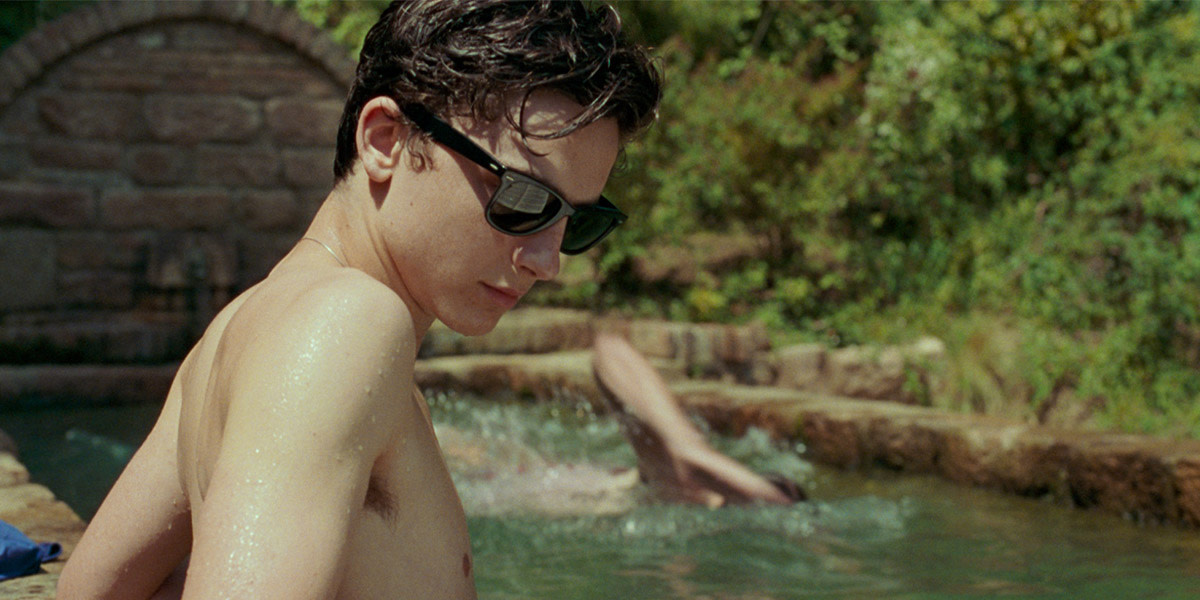 Watch Armie Hammer, Timothée Chalamet, and Luca Guadagnino talk Call Me By Your Name at TIFF ’17

Luca Guadagnino’s Call Me By Your Name captures the fleeting but engulfing romance between teenaged Elio (Timothée Chalamet) and his father’s research assistant Oliver (Armie Hammer), who comes to stay with Elio’s family at their Italian villa during the sultry summer of 1983. It’s a most infatuating movie about infatuation — a coming-of-age film that completely overwhelms the senses as it details the first blush of attraction (in all of its awkwardness, sensuality, and beauty).

Guadagnino took a completely immersive approach to making the film, electing to shoot in his hometown of Crema, Lombardy, in Northern Italy. He cast Hammer and Chalamet based on instinct, without auditions. Although the two leads didn’t meet until pre-production, it’s evident from their recent interviews that Guadagnino’s unique attentiveness is what allowed them to give themselves over — both to the film and to each other. 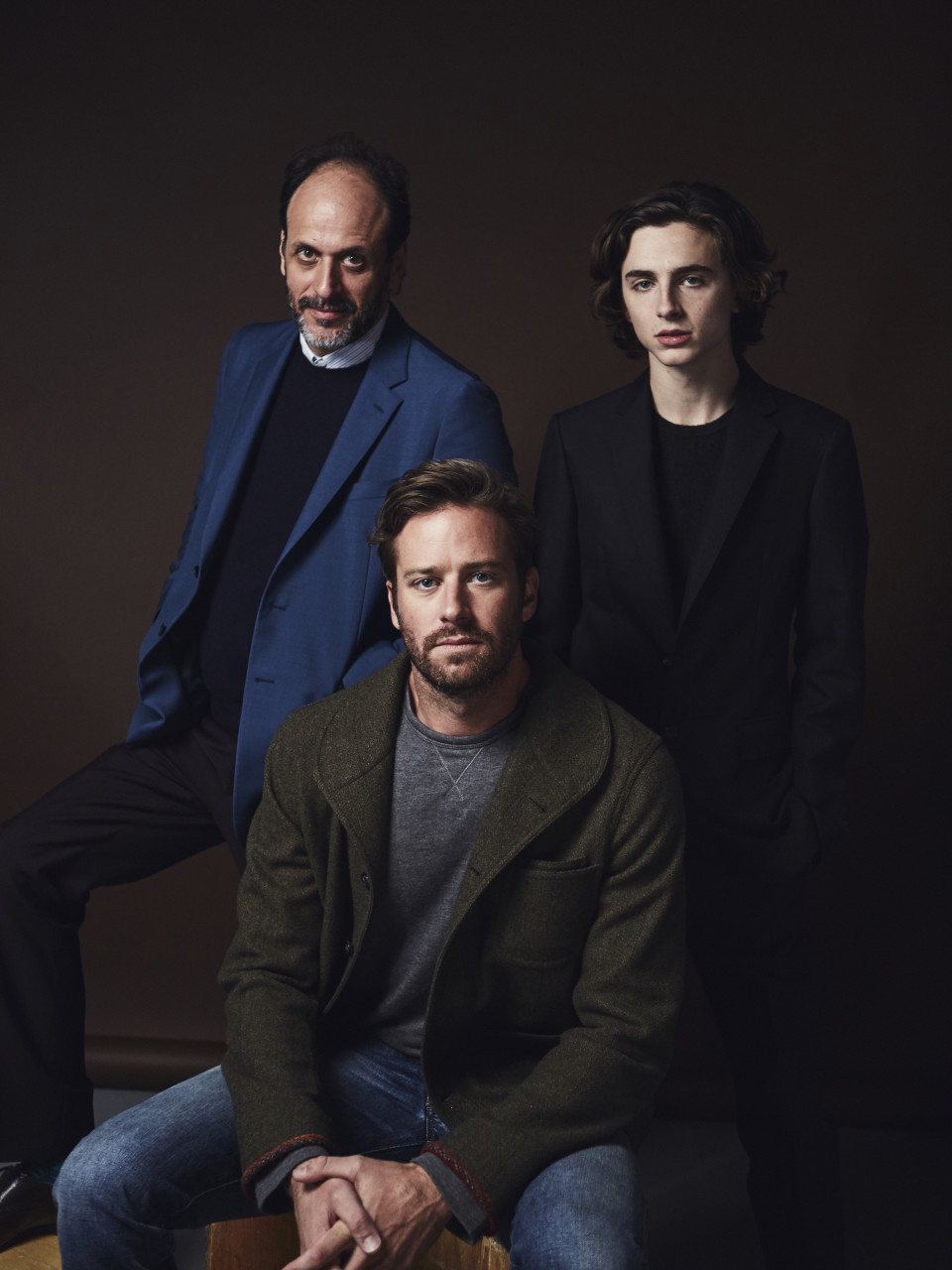 Since premiering this past year at Sundance and screening at TIFF '17, Call Me By Your Name has been tapped as a strong Oscar contender. What’s particularly intriguing is how its director and stars have retained their original spirit of openness, even while undergoing a gruelling publicity cycle. Hammer’s journey to discovering his own vulnerability was the subject of a heartbreaking profile in New York magazine. Guadagnino has been quoted as saying that he needs to fall in love with his actors. (Here he is at the TIFF ’17 press conference: “It’s interesting because every director is a little bit of a sadist, but it’s also a healthy process because you fall in love and then you sublimate it on screen instead of wanting them.”)

Call Me By Your Name is now playing in wide release in the United States, and Toronto audiences can recapture the Festival’s big romance when the film opens at TIFF Bell Lightbox December 22. To prime yourself, here are five anecdotes gleaned from onstage conversations with Guadagnino, Hammer, and Chalamet at TIFF ’17, conducted at the official press conference and the Guardian x TIFF Talk. 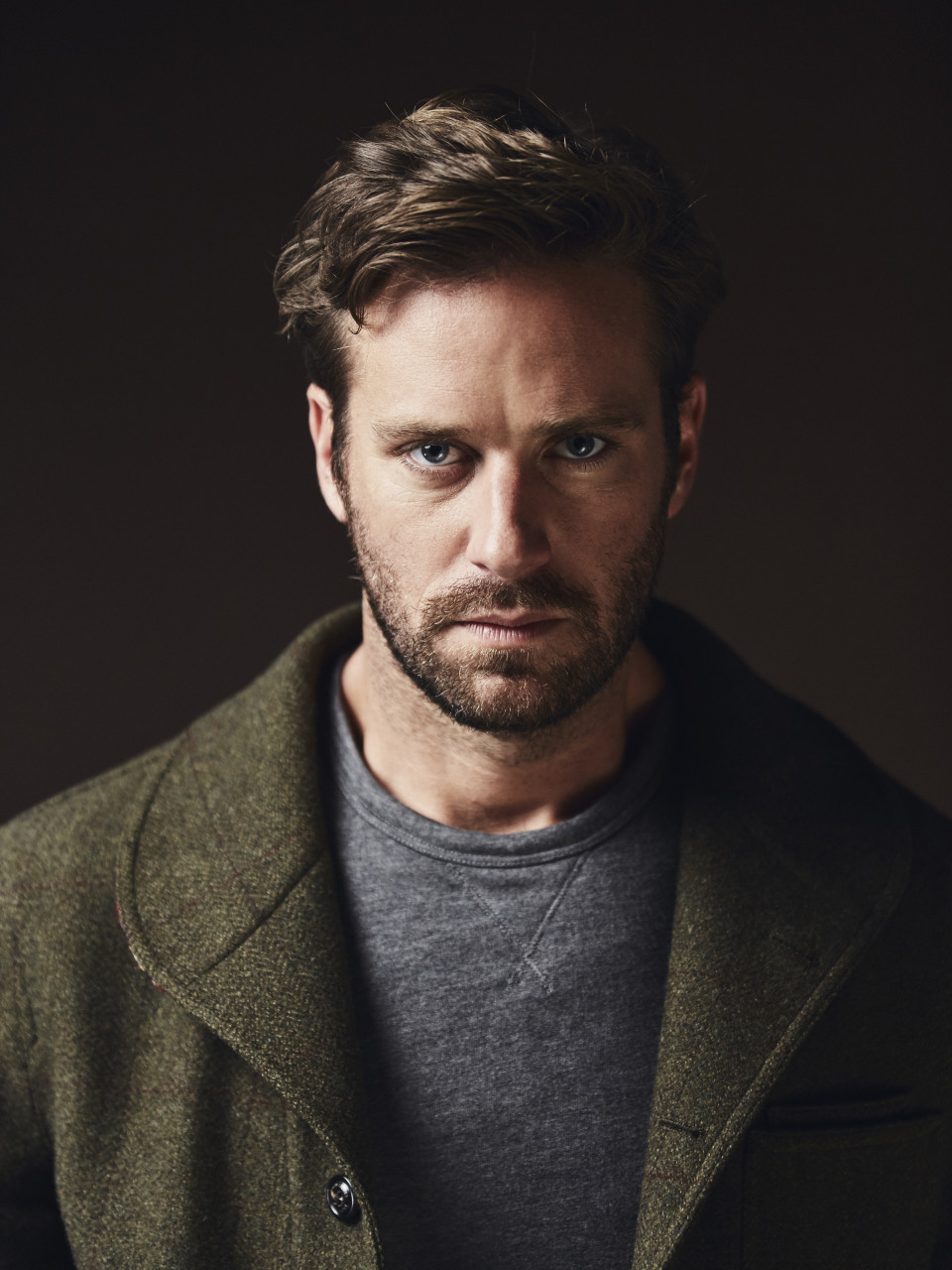 Armie Hammer, Call Me By Your Name

It’s hard to imagine the character of Oliver, the young PhD candidate who eventually falls for Timothée Chalamet’s teenage Elio, without Hammer’s flailing dance-floor moves. But the actor — best known for his “Winklevii” twins in David Fincher’s The Social Network and impassive hunks in The Man from U.N.C.L.E. and Nocturnal Animals — was “terrified” when he came across the script for Call Me By Your Name.

“There was just such a high level of intimacy that I had never done on camera before,” Hammer explained, onstage at the TIFF press conference. “I also have two little kids and was a little bit nervous about all the nudity that was originally in the script. I just [imagined] my daughter being 13 at school and people printing images of my penis from the internet and [I was] like, ‘Oh man.’ But I was completely won over once I saw things from a completely different perspective than my own.”

That perspective came from director Guadagnino who, in one phone call, convinced Hammer to embrace his fears. Said the filmmaker: “The first feature by Stanley Kubrick is called Fear and Desire. I said to Armie: if you fear something, you desire something, so you better do it.”

2. The infamous peach scene had its own pre-rehearsal process.

“I remember so vividly, that day, that he wasn't treating it any differently than any other scene we shot,” the actor said at the press conference. “I guess that’s a young person’s instinct too; you look to whoever’s guiding you.”

“I loved the book, but that scene was really a contrivance for me,” remarked Guadagnino. “I could believe that Ellio needed to explore, but I didn't think technically that it was really working. Then I came back to set and said: ‘I tried it. It works.’”

Admitted Chalamet, to uproarious laughter from his co-star, director, and moderator Johanna Schneller: “I tried too.” 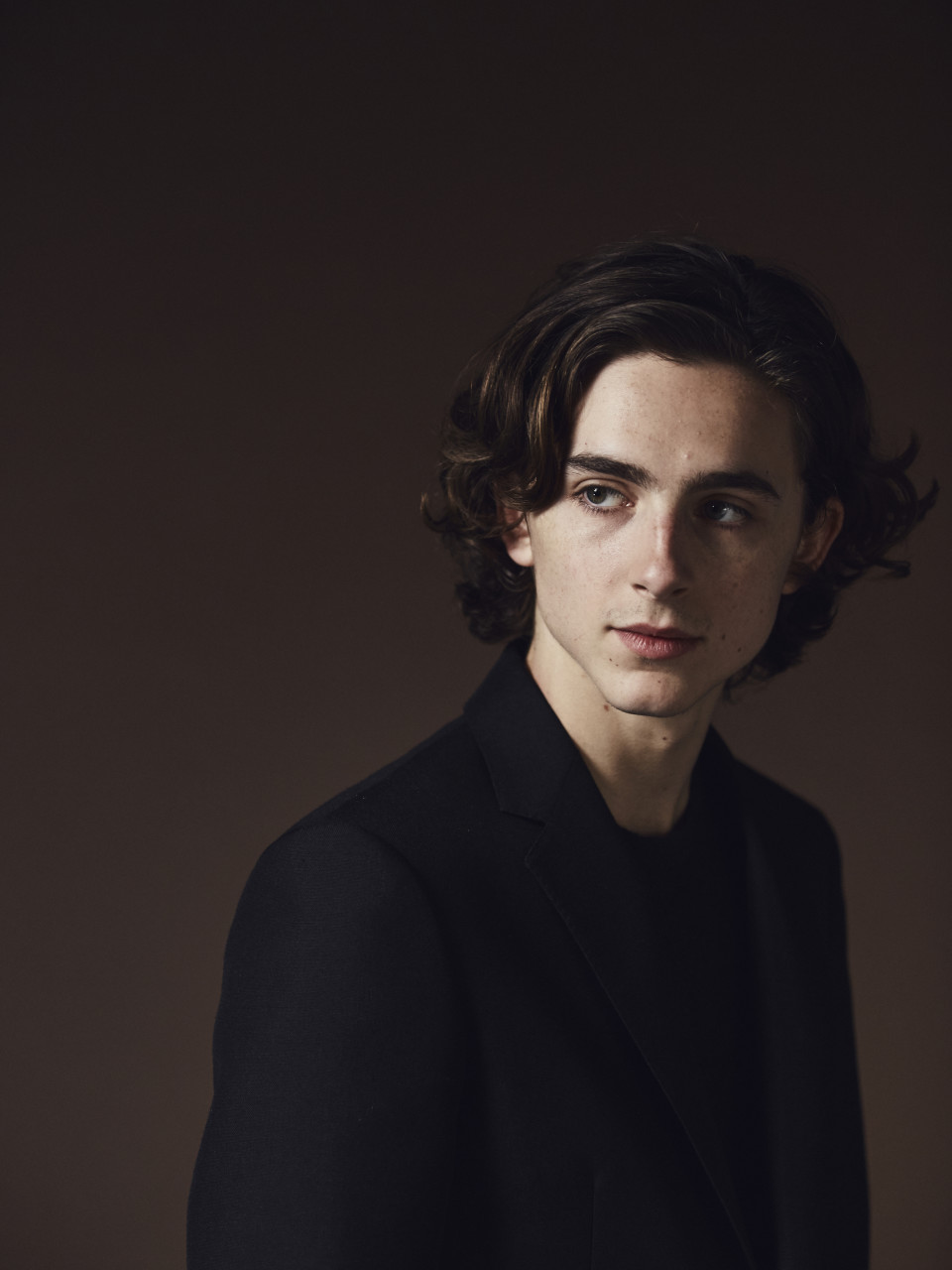 Timothée Chalamet, Call Me By Your Name

3. Call Me By Your Name is not a gay movie, it’s a bisexual movie.

During a landmark year for queer cinema, Call Me By Your Name still stands out as one of 2017’s best films, thanks to its relatable portrayal of an ill-fated relationship. While decades of mainstream cinema may have conditioned us to expect that the central couple will break up due to tragedy or strife (e.g., disease, abuse, family disapproval) — as with so many breakups, the main enemy here is bad timing.

“There was always some discomfort for a movie like this from the market, probably because it was a movie that didn’t have any real antagonism,” said Guadagnino at the Guardian x TIFF talk.

Added Chalamet: “One of the things that’s always appealed to me about this film is the lack of an oppressor, whether that’s the lack of a disease, or a group of people who are trying to mess with their relationship…. This is a love story, and it is a really sweet love story where the villain is the tragedy of love, so it didn’t feel salacious or anything like that.”

During the TIFF ’17 press conference, one journalist even remarked that the film didn’t “feel like a gay movie.”

“It’s not a gay movie because it’s about Elio and Oliver, and who knows what Elio and Oliver will end up being in the future,” responded Guadagnino. “By the way, maybe we are making the first bisexual movie; let’s not discriminate bisexuals. Or it’s a Jewish movie, or it’s a Lombardy movie… I think the political message of this movie can be: ‘build bridges, don't build walls.’” 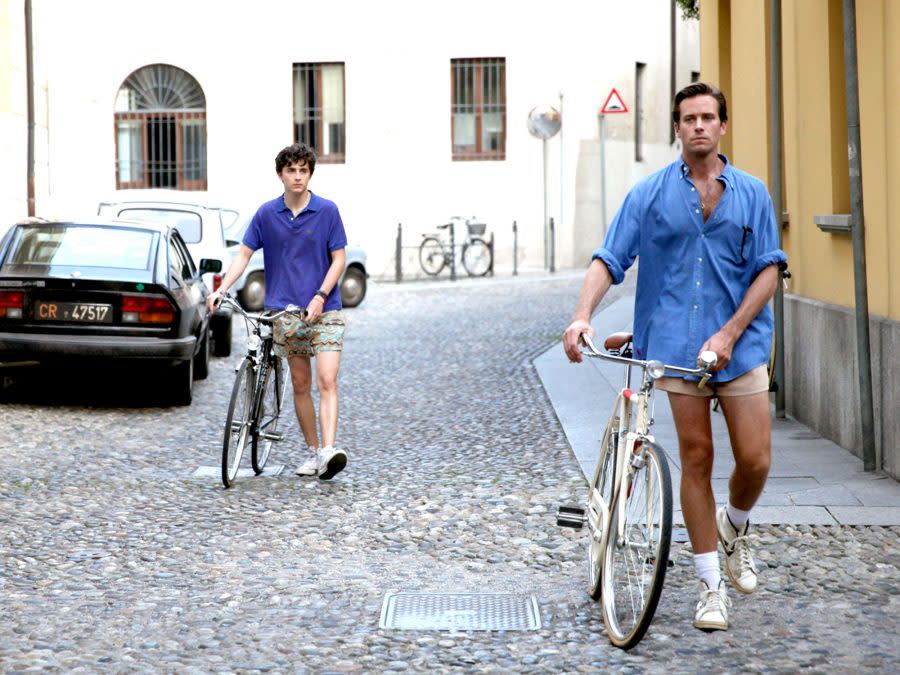 4. Armie Hammer really got into wearing those short-shorts.

The period setting of Call Me By Your Name meant sticking to a strict ’80s dress code. Much like a character in an Eric Rohmer movie, Oliver spends his summer dressed for the beach in half-unbuttoned short-sleeved shirts, high-top sneakers, and the shortest short-shorts known to man.

That act of inhabiting one’s body and letting go of one’s defences eventually affected the actor’s own fashion choices.

“I remember the first time we had a fitting, I put on a pair of those shorts and said, ‘Where's the rest of them? By the end of [the shoot], once I took those shorts off for the final time, I went home, put on a pair of my own shorts, and was like, ‘Ugh! There’s so much fabric on my legs!’” 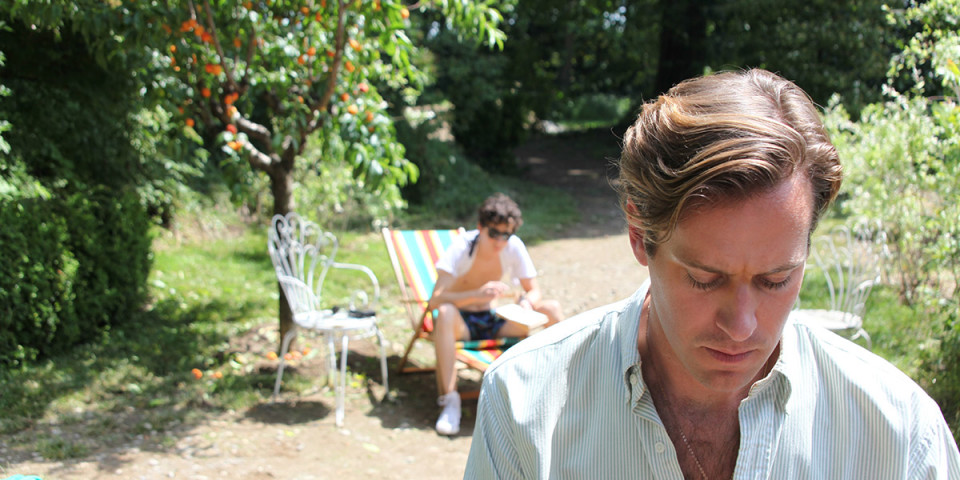 5. The making of the film was its own big summer romance.

It’s hard not to feel deeply nostalgic for the impermanent nature of a summer romance. For both lead actors, who hadn’t experienced the kind of tempestuous and emotional love affair featured in Call Me By Your Name, it was the making of the film they drew from instead.

Remarked Hammer: “I’ve never had the pleasure or the privilege of working on a film that I felt challenged me so much. Or working with people, including Timmy [Chalamet] and Michael [Stuhlbarg, who plays Elio’s father and Oliver’s advisor], who also challenged me in a way where it felt so completely symbiotic.… It all felt like, in a way, we were all living out the experience that is there on screen. This movie is sort of my big summer romance. When people ask me, ‘Did you ever have an experience like this?,’ I say, ‘Yeah, making the movie.’”

Call Me By Your Name, directed by Luca Guadagnino.

Call Me By Your Name

"They're not characters who say 'I love you,' so they call each other 'faggots'"