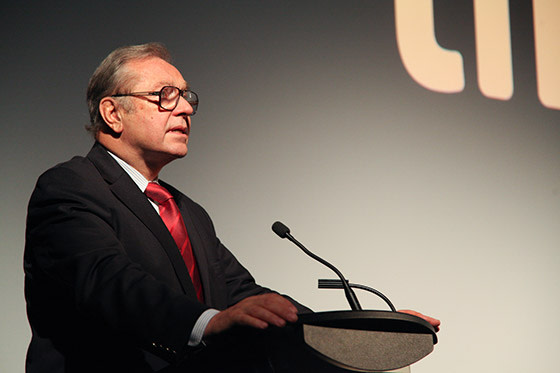 One of the towering figures of postwar Polish cinema, filmmaker and scholar Krzysztof Zanussi delivered a lecture entitled "European East of West." Drawing on clips from his films, Zanussi, who has been awarded honorary doctorates from many renowned universities, focused on the cultural understandings and misunderstandings that define Central Europe and its complex relationship to the Soviet bloc. Other topics included: the politics of language, collaborative filmmaking, international film co-productions, and the intersection of philosophy, politics, literature, film and theatre.

The director, producer, and screenwriter is the author of many award-winning, internationally acclaimed films, including: The Structure of Crystal (1968), Illumination (1973), Camouflage (1976), The Constant Factor (1980), A Year of Quiet Sun (1984), Persona non grata (2004), and Foreign Body (2014). The President of Tor Film Production, which has produced films by Krzysztof Kieslowski, Agnieszka Holland and many others, Zanussi is also a member of the European Film Academy Board and the Pontifical Commission of Culture at the Vatican. This Higher Learning event was held on June 13, 2014 at TIFF Bell Lightbox.