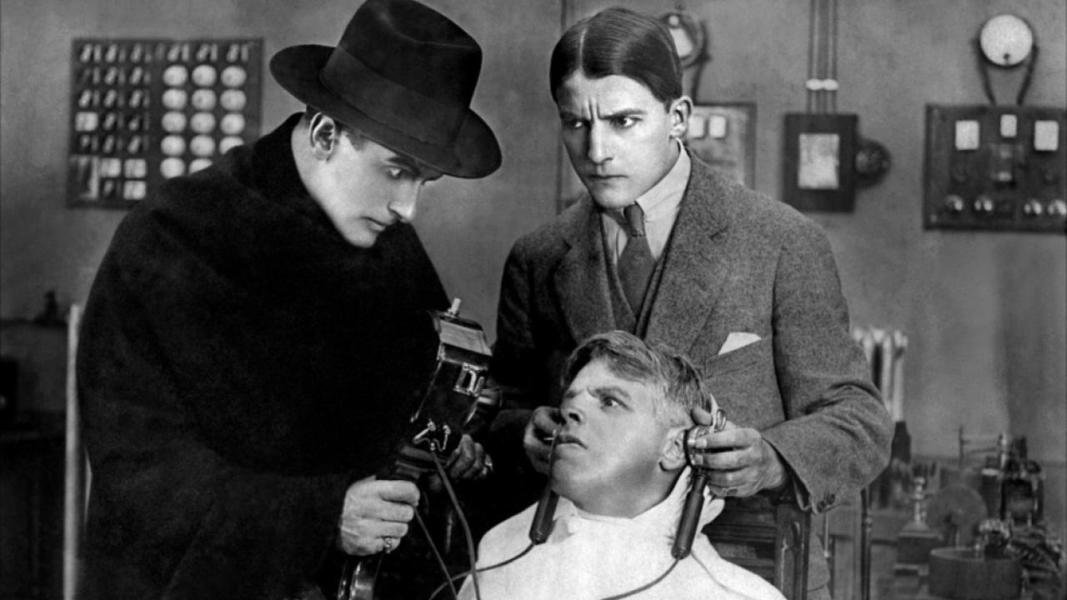 Before Marvel and DC exercised global domination with the big-screen blockbusters based on their comic-book creations, the silent screen defined the narrative tropes and visual characteristics that now allow modern cinematic superhero franchises to thrive. In France in 1916, director Louis Feuillade established what would become the prototypical superhero narrative: a mysterious, masked and caped crusader with a tragic past seeking vengeance on the villain who destroyed his family. That’s right: before there was Batman, there was Judex, a 14-chapter, 300-minute serialized epic that became a box-office sensation and established the template for the superhero genre. And, much like the seemingly endless cycle of sequels and reboots that has given us three Batman franchises over 20 years and three Spider-Men over ten, Judex as well inspired a 1963 remake directed by Georges Franju — which, unlike most such exercises, is a masterpiece in its own right, an homage to silent cinema that brings its own surrealist flavor to the caped-crusading proceedings. 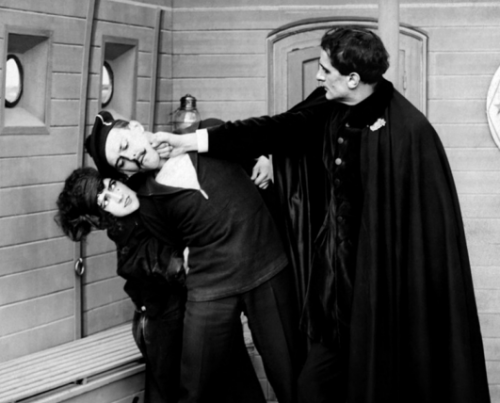 Feuillade was fresh off the success of Les Vampires (1915-16) when he embarked upon Judex in 1916. Concerned about charges that Les Vampires and its predecessor, the equally popular Fantômas (1914), glorified crime — both serials depicted cunning criminal syndicates wreaking havoc on upper-class French society, with precious little comeuppance — Feuillade set out to create a hero who would avenge wrongdoings and bring criminals to justice.

In conceiving their hero, Feuillade and his collaborator, novelist Arthur Bernède, looked to villains for inspiration. As played by French screen heartthrob René Navarre, Feuillade’s sinister Fantômas was a lavishly outfitted French dandy who utilized advanced technology to pull off his elaborate heists; on the distaff side, Musidora, as the Vampire operative Irma Vep, cut a stunning figure as she scaled the roofs of Paris in a black mask and catsuit. For Judex, Feuillade wanted the same kind of drama and theatricality that had previously been embodied in his iconic villains. 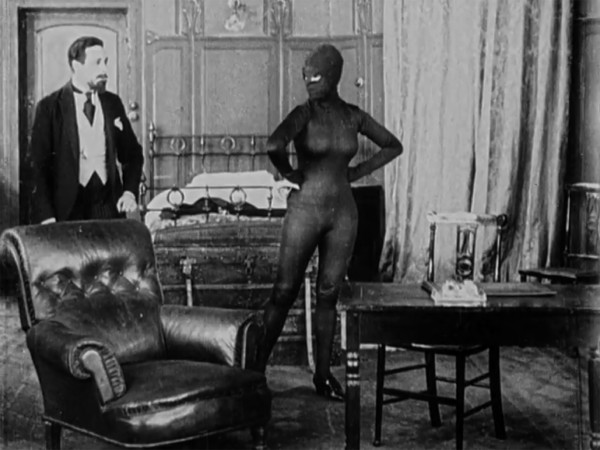 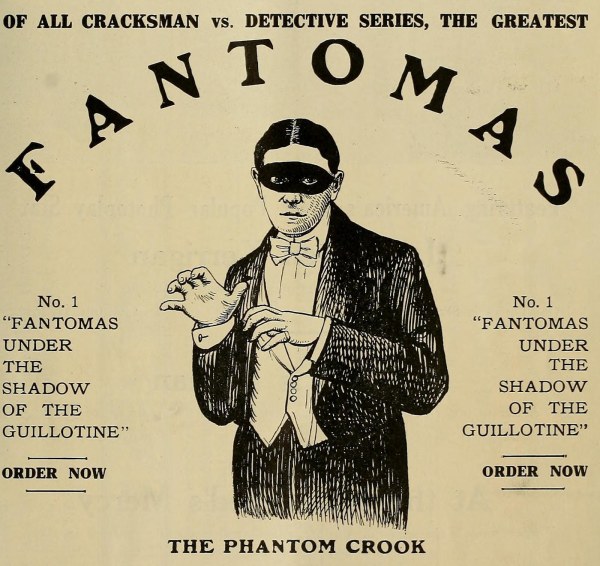 A poster depicting the title villain of Feuillade's Fantômas

Judex (Latin for “judge”) was portrayed by René Cresté, a popular French actor who would die a few years later from tuberculosis. A master of disguise and a skilled fighter, like Batman/Bruce Wayne Judex must balance his secret identity with his real-life persona as Jacques de Trémeuse, a wealthy bourgeois with an enormous urban castle that conceals a technologically-advanced subterranean lair. Again like Bob Kane’s hero, as a child de Trémeuse lost his father to tragic circumstances: the corrupt banker Favraux (Louis Leubas) stole his family’s money, which led to his father’s suicide. Adopting the disguise of Judex, de Trémeuse seeks to destroy Favraux and his evil associates — but ultimately finds himself falling in love with the banker’s widowed daughter (Yvette Andréyor). Feuillade’s Les Vampires star Musidora, the most iconic French actress of the 1910s, is also on hand as the devious and delightfully sinister Diana Monti, Favraux’s duplicitous mistress; and Judex also picks up a Robin-esque sidekick named the “the Licorice Kid” (played by child actor René Poyen), an adoring street urchin who helps Judex in his crime-busting pursuits. 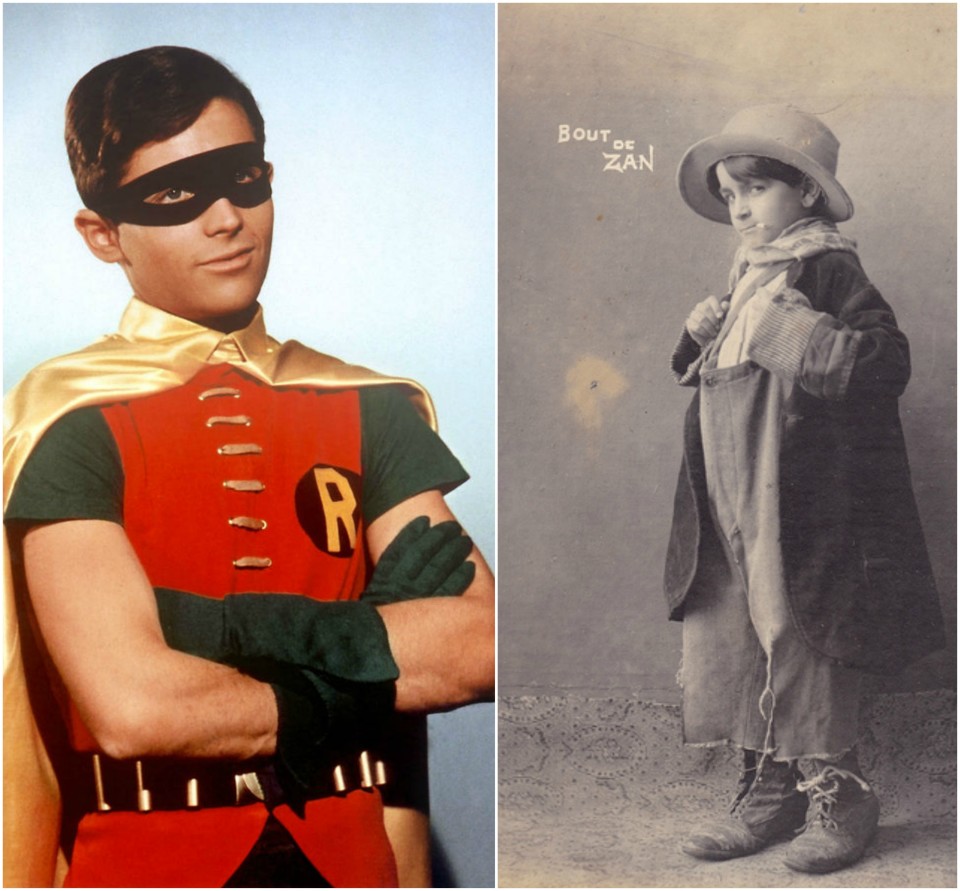 While one must concede that the plotting across the serial’s 14 episodes becomes extremely knotty at times — keep in mind that at the time, feature-length cinematic storytelling was in its infancy — Feuillade’s Judex is nonetheless thrilling, stylish, and remarkably modern in its art direction and the editing of its action and suspense sequences. The serial proved to be fantastically popular, and it had an enormous impact on the French film industry, inspiring novels, graphic design, and a 12-chapter sequel, La Nouvelle Mission de Judex, less than a year after the original’s release. However, as was the case with Feuillade’s previous films, the serial’s unabashed mass appeal and commercial success led to its being dismissed by film academics and critics in the decades following the silent era. It was not until Franju breathed new life into Feuillade’s crimefighter in a very different era that the original’s significance was widely acknowledged. 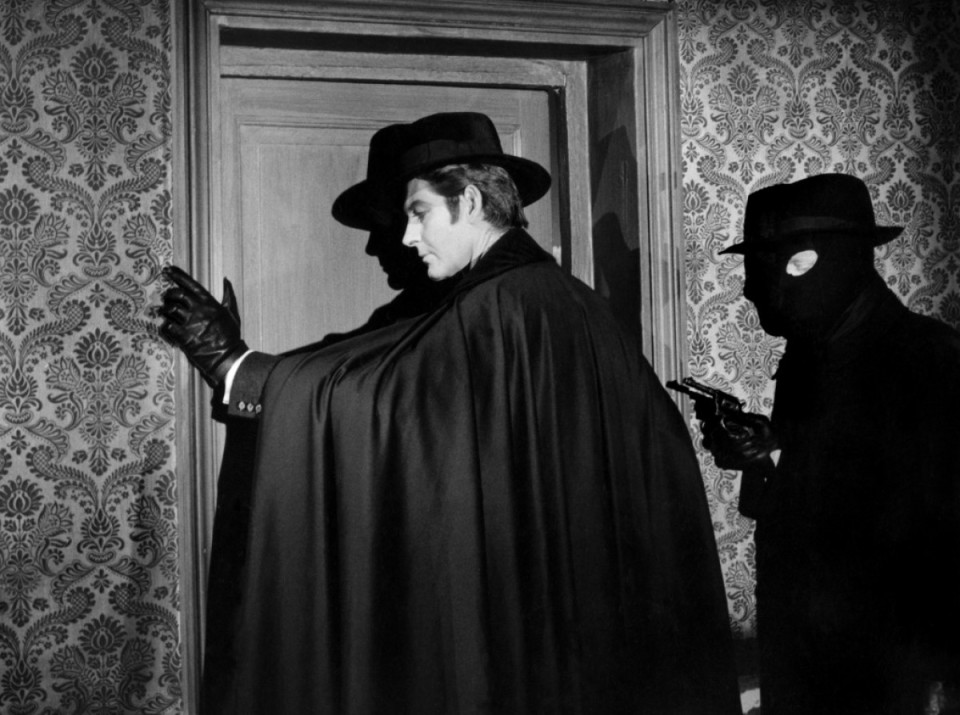 Channing Pollock as the title hero in Georges Franju's 1963 Judex

Best known for his horror classic Eyes Without a Face, Franju made no secret of his worship for the silent era. In the early 1930s, he had co-founded with Henri Langlois a ciné-club (and accompanying journal) called Le Cercle du Cinema, in which they screened silent films in a variety of Parisian venues (although mostly in friends’ apartments) and facilitated the growth of a community of burgeoning cinephiles. In 1938, that grassroots ciné-club and the duo’s growing film collection (of predominantly silent titles) served as the foundation for the Cinémathèque française, which Franju and Langlois co-founded with film theorist, critic and filmmaker Jean Mitry.

Soon thereafter, however, Franju distanced himself from the operations and programming of the Cinémathèque, opting instead to focus on his own filmmaking. Following his first film Blood of the Beasts (1949) — a short documentary about the daily operations of a Parisian slaughterhouse, a remarkable vision of both horror and beauty — Franju made further short documentaries, including the 1952 Le Grand Méliès, a 30-minute documentary about the silent-film pioneer, with Méliès’ son André impersonating his father on screen and his daughter Marie-Georges providing the narration. Attaining international success with Eyes Without a Face in 1959 and his prestigious Mauriac adaptation Thérèse Desqueyroux in 1962 (which won its star Emmanuelle Riva the Best Actress award at the Venice Film Festival), Franju had both the commercial and critical clout to make his grandest homage to his beloved silent cinema yet. 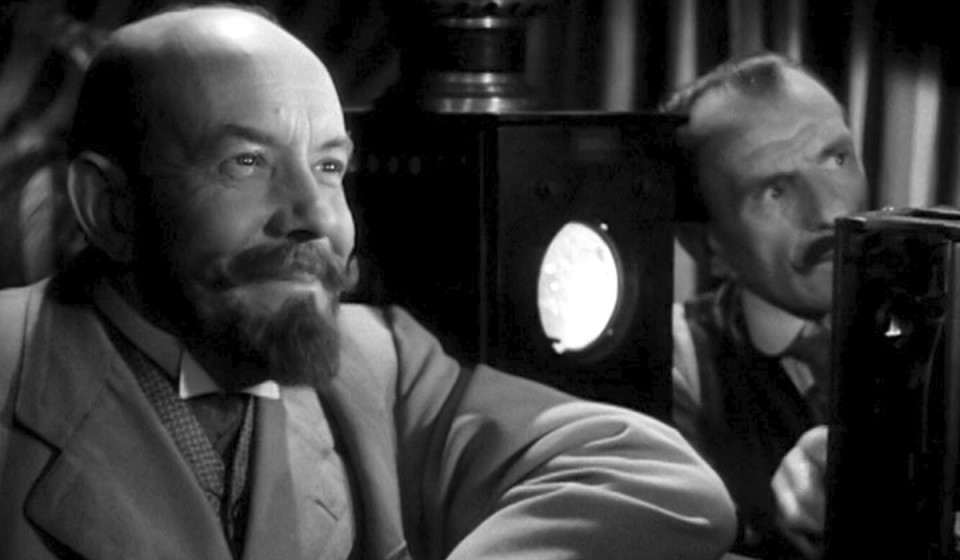 In revivifying Judex for a new era, Franju remained faithful to his source in the 1910s setting and even the use of intertitles, but, crucially, he elided Judex’s back story of family trauma and woe. While this omission surely had something to do with the inherent challenge of condensing Feuillade’s 300 minutes of twists, turns, and shocking reveals to a cool 90 minutes, it also serves Franju’s other purpose of emphasizing the mysterious, inexplicable, surreal aspects of the original scenario, which he also amplifies with references to German Expressionism and Surrealism. Franju opens his film at a masquerade ball, an ominous and dreamlike sequence where our hero is first introduced to us as a partygoer clad in a bizarre avian costume — an image which remains one of the most exciting and imaginative in all of French cinema. 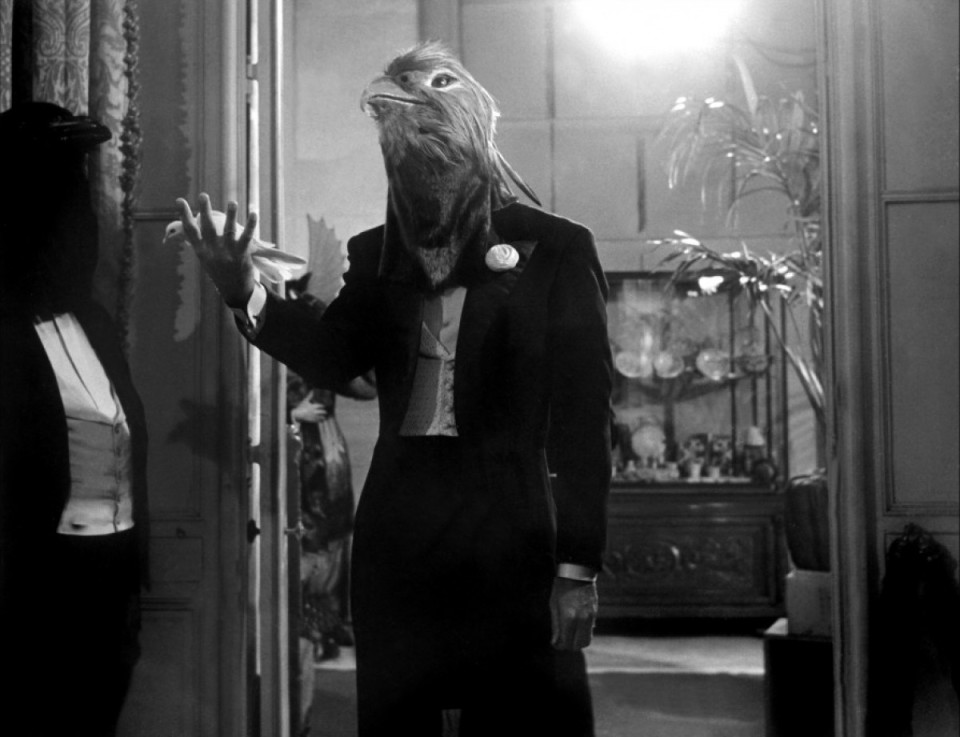 Our hero, from the opening masquerade-ball sequence of Franju's Judex

It is this mixture of sophistication and naiveté, faithful homage and imaginative flights of fancy, that gives Franju’s Judex its own special magic. The costuming of the characters is in keeping with the 1916 version, if not in direct quotation; the filming locations are the same, and many of the actors and actresses are virtually quasi-doppelgangers of their silent-screen forebears. In particular, Francine Bergé as Diana Monti, with her dark features and Modigliani-like almond-shaped eyes, is a stunning recreation of Musidora’s signature look. (Franju knew Musidora well, and the Cinémathèque even employed her as a ticket-taker in the 1940s after she fell on hard times.)

For the role of the corrupt banker’s daughter and Judex’s love interest, Franju cast his Eyes Without a Face star, the ethereal, swan-necked Édith Scob, while Judex himself was embodied by the American magician turned actor Channing Pollock, who embraces the superhero tropes with an ironic, almost comical zest. In fact, much of Franju’s Judex anticipates the campy Batman series with Adam West and Burt Ward, in the outlandish, larger-than-life villains played with tongue in cheek, and the far-fetched hyperbolism of the hero’s techno-crimefighting gadgets. 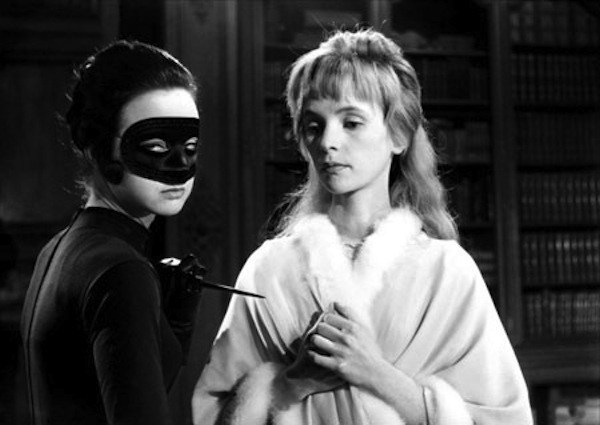 Franju’s untroubled fusion of the modern and silent cinemas put in sharp relief the silent-screen influence that was evident in the works of the emerging nouvelle vague. Schooled in silent-film aesthetics during their reverent viewings at the Cinémathèque, New Wave directors began to pepper their own films with homages to silent filmmakers. Agnès Varda inserted her stylized short silent film Les Fiancés du Pont Macdonald, which starred Anna Karina and Jean-Luc Godard, into her Cléo de 5 à 7 (1962), while Godard himself paid tribute to Carl Dreyer’s 1928 masterpiece The Passion of Joan of Arc in a famous scene in his Vivre sa vie (1962). In 1970, François Truffaut openly adopted silent-film aesthetics for The Wild Child (1970) utilizing a 1:1.33 aspect ratio, an iris zoom-in/zoom-out for transitions, and black-and-white cinematography.

Released in 1963, Franju’s Judex attracted generally admiring notices and healthy box office, but ironically found itself subjected to the same dichotomous art-vs.-entertainment mindset that had relegated its inspiration to the film-historical dustbin for so long. It’s amusing to think that today, when so many superhero blockbusters are treated as if they were cultural events of earthshaking importance, Franju’s beautiful, artful, and mysterious meditation on the costumed hero could have been written off as a lark. In comparison to today’s breed of superheroics, which so often lays a gloss of wised-up cynicism and superficial intellectualizing over childish material, Franju’s tribute to the beauties of childlike innocence is all the more welcome and evocative.