Johnnie To: Man on a Mission 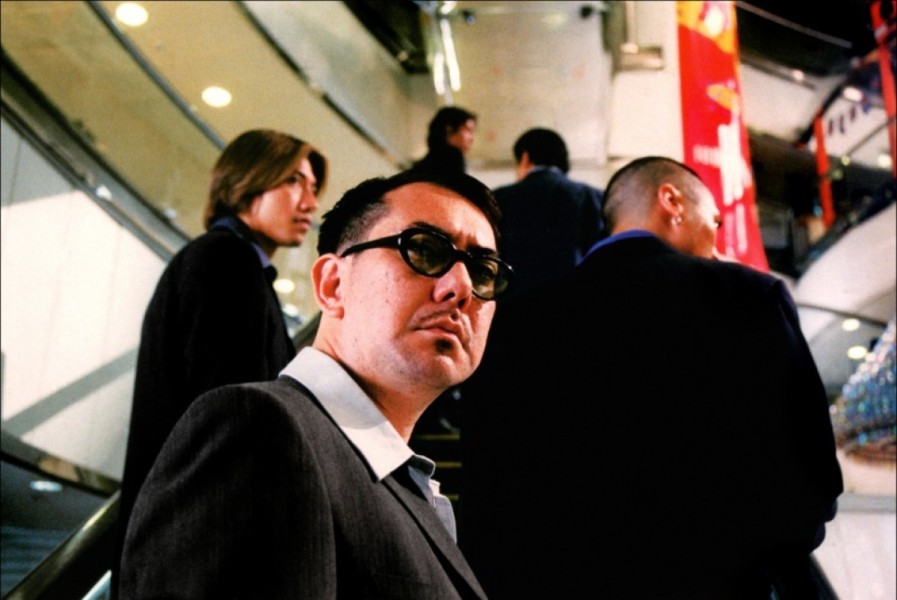 In the below excerpt from his essential study Planet Hong Kong (reprinted with the generous permission of the author), renowned film scholar David Bordwell breaks down the visual and storytelling strategies in Johnnie To's 1999 masterpiece The Mission, which the director will attend at TIFF on October 26 to kick off our major retrospective Johnnie To: Expect the Unexpected.

The Mission exemplifies Johnnie To’s ambition to create something new in local cinema. Shot in 18 days for about US$300,000, more or less made up as it went along, the film has become a milestone in post-handover cinema. It bears the influence of Kurosawa but also owes something to the early 1990s films of Kitano Takeshi, who invested gunfights with a statuesque simplicity at odds with the kinetic Hong Kong tradition. At the same time, The Mission exemplifies how To’s laconic, elliptical principles of narration can yield something of enduring value. “I only knew what filmmaking was about when making The Mission,” To declared soon afterward. “I feel I am only beginning.”

The plot of The Mission is strangely broken-backed. Lung, a top triad, has been marked for assassination. His long-time bodyguard failed to halt a gun attack, so his brother Frank hires five street toughs to protect him. Curtis, a hairdresser, brings along the gun dealer James and the pimp Mike; Roy, a club owner, brings along his protégé Shin. Curtis is the leader, although Roy will contest him. The first hour of the film shows the team’s efforts, moving into the Lung compound. Stretches of down time alternate with firefights in which our team must fend off assassins. Interwoven with this plot line are the problems Roy has in controlling his territory while he’s on this assignment. When the bodyguards pursue a band of hitmen to their hideout, they find a clue that identifies the schemer behind the attacks: Lung’s old, now feeble partner Fat Cheung. Frank has him killed. Mission accomplished.

But the film can’t end so soon, and a new plot emerges. After the bodyguards are paid, Frank tells Curtis that the rookie Shin has had an affair with Lung’s wife. Curtis now must have Shin killed. The classic conflict between duty and friendship, seen in samurai and yakuza films and wuxia pian, takes shape. How Curtis resolves the problem — his new mission — consumes the last 25 minutes of the film. 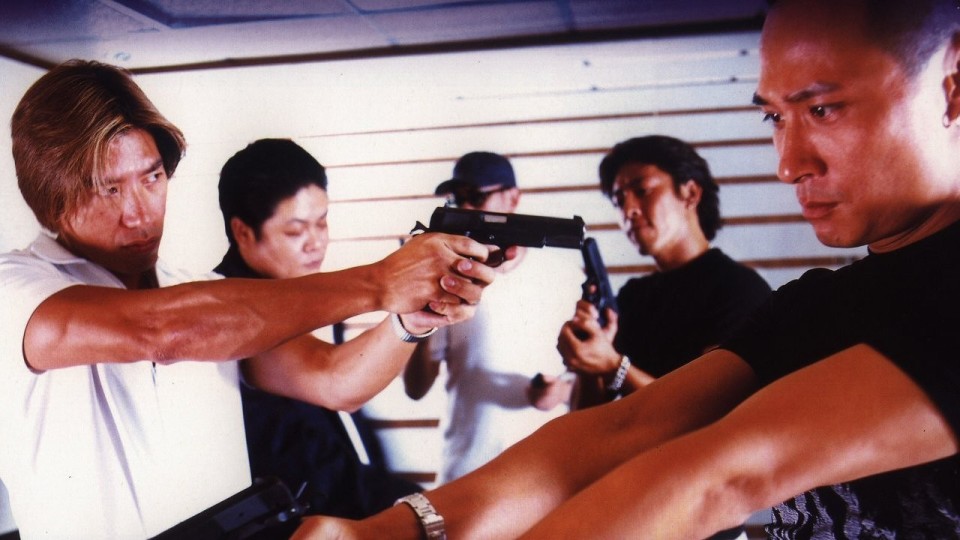 All the standard [To] ingredients are here. We have the opaque schemes: Fat Cheung’s plot to take over, then Curtis’ more ingenious plan to dispose of Shing. We have the parallel protagonists and the repayment of loyalties. When Curtis inadvertently leaves Roy behind after a gunfight, he must make it up to him, and so he sees to the killing of Roy’s main competitor Rat. The most timely accident occurs when Lung’s disgraced former bodyguard appears as a floor-mopper, and in a spurt of courage takes a bullet for his former boss. There are as well scenes of stoic comradeship, men testing guns, eating together, pulling pranks, and doing their jobs with crisp efficiency. Just as important, all these elements don’t require a big budget.

The film boasts unforgettable cinephile set pieces. In one famous scene, the idling men kick a wad of paper among themselves like a soccer ball.

Then there’s the even more famous scene of the gun battle in a deserted shopping mall. Here To innovates by creating a static action sequence, putting each man in a holding position and inventively refreshing the widescreen compositions through cutting and camera movement. Instead of a blood ballet, we have an “anti-action” scene, emphasizing the tense poise of a defensive strategy. If classic Hong Kong film rests on pause/burst/pause choreography, To stretches the pause phase to the point of fixity.

In The Mission, the narration is as tight-lipped as the characters. Across the first part, the bond that the men come to share is shown through gestures rather than words. After Curtis indirectly apologizes to Roy by killing Rat, the men turn their cigarette-sharing into a schoolyard prank. But the new fraternity is threatened by Shin’s indiscretion. If Curtis doesn’t kill Shin, the entire group is in danger of reprisals from Frank. And the loose cannon Roy is unlikely to keep a fake death secret. So Roy and Frank must believe that Shin has been killed. Yet Curtis doesn’t want to kill the boy. He conceives a scheme whereby he will pretend to kill Shin in front of Roy and Frank’s lieutenant. In exchange, Shin must flee Hong Kong.

Curtis’ plan is never explained in the bald terms I’ve just used. There are no scenes of Curtis agonizing over his choice, or meeting with Shin to set up the fake killing. Moreover, we’re distracted from grasping Curtis’s plan by the film’s emphasis on a counter-scheme attempted by Roy. He wants James to give Curtis a pistol filled with blanks. This scheme is spelled out a little more than Curtis’, but using To’s minimal narration: shot of black pistol, followed by a line of dialogue indicating that the dummy pistol is black. Unfortunately, Curtis has seen one move ahead and at the showdown the pistol he lays on the table is silver. Roy’s scheme has failed.

James emerges as a major character during the climax. He’s the one who discovers Curtis’ intention to kill Shin. (He discovers it in the way Curtis wants him to — that’s part of Curtis’s scheme.) At the showdown, James begs Curtis to wait until he’s tried to convince Frank to spare Shin. But when he sees Mrs. Lung gunned down, he realizes that Shin could never be forgiven. And after Curtis has apparently killed Shin, it’s through James that we realize that Curtis has performed a charade. Now we understand why the plot starts with James and uses his nighttime wanderings to link the other men in the early scenes. It’s through James that we’ll get the solution to the film’s second mystery. 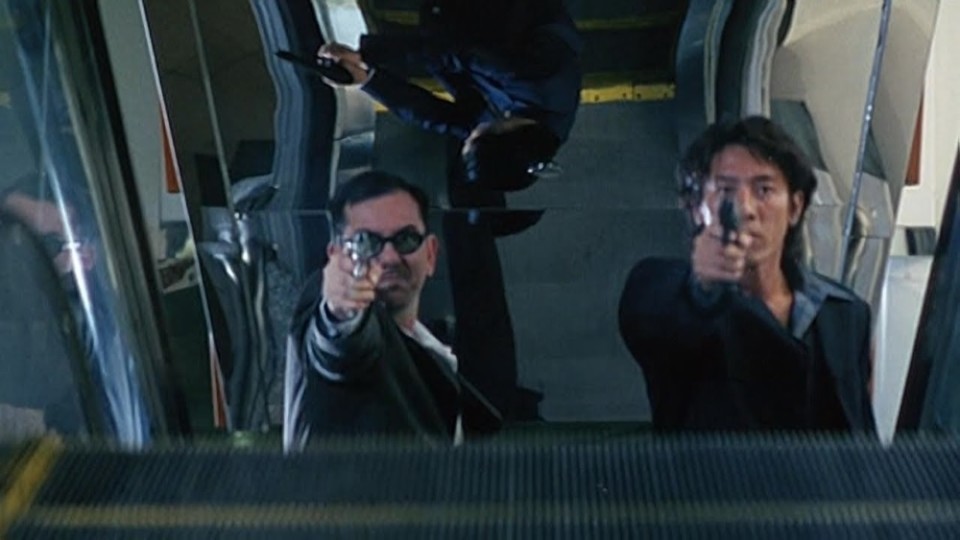 The miserly doling out of information is especially apparent in a re-viewing of the film. What enables Shin to survive Curtis’ pistol shot across the dinner table? In a throwaway earlier scene, he orders a bulletproof vest, and after the climactic siege he’s saved by wearing it. So presumably he has it on for the restaurant charade. Why does Curtis borrow James’ cellphone to call Shin? In order to tip off James that he intends to kill the boy. Above all, does Shin’s affair with Mrs. Lung come as a complete surprise? Roy has been Mrs. Lung’s driver but one day he comes back to the Lung house and orders Shin to take over the job. Later, we see the car stalled in a rainstorm. When Shin returns to the household that day, there is a distant, static long take of the kitchen. Shin strips off his shirt and goes to the rear of the frame. As other items of the scene claim our attention, Roy leans forward slightly and sniffs the shirt. He then orders Shin to take a shower and tosses the shirt to him.

Apparently the shirt smells of sweat and Roy is playing the bossy big brother. But later, when defending Shin’s affair, Roy says that Mrs. Lung tried to seduce him. This is presumably why he quit being her driver. The shot in question, buried in the middle of the section in which the plot against Lung is still the primary engine of action, already hints at what will occupy the second part of the film. Roy notices that Shin’s shirt smells of perfume. This is To’s tell-it-once rule in action.

An even more cunning ploy helps that shot slip by us. The film sets up an intrinsic norm of showing the Lung household in fairly distant framings. Key here is a shot occuring early in the team’s occupancy of the mansion. A long-take long shot shows Mrs. Lung coming down to ask two of the men for some water. No action of any plot consequence takes place, but the distant framing prepares us to take the later long shot of Shin’s return as another bit of innocuous down time. 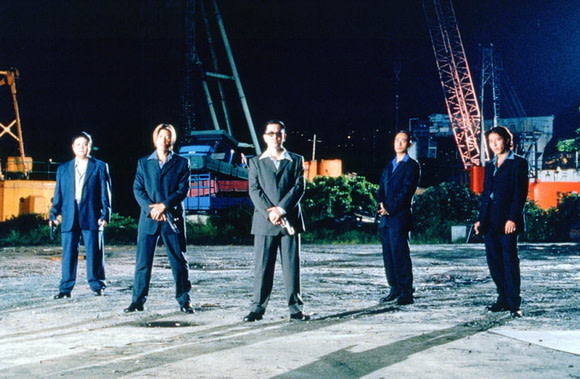 I know of no previous Hong Kong crime film with such suppressive and elliptical narration. To uses his multiple protagonists not only to pursue different strands of action but to switch points of view in ways that hold back information from us. This is somewhat like Wong Kar-wai’s withholding of information about the affair at the heart of In the Mood for Love. But whereas Wong flaunts the fact that he’s hiding things, To is more covert. We don’t expect that a film that can dwell on men kicking around a ball of paper will be so reluctant to divulge an extramarital affair or a fake murder scheme.

To’s laconic narration suits his characters and his genre. More importantly, his deceptive play with style and storytelling offers one solution to the problem of how to achieve originality within the new constraints of the post-1995 era. In Infernal Affairs, Andrew Lau and his colleagues innovated by creating a genre piece as well carpentered as Hollywood might provide. Johnnie To moved in the other direction, toward bait-and-switch plots and images that send the eye on scavenger hunts. With The Mission and other films, he — like Stephen Chow, like Wong Kar-wai, like many before them — showed that a tradition that puts a premium on the sensuous, artifice-loving side of entertainment still had some cards to play.

Johnnie To throws down at TIFF