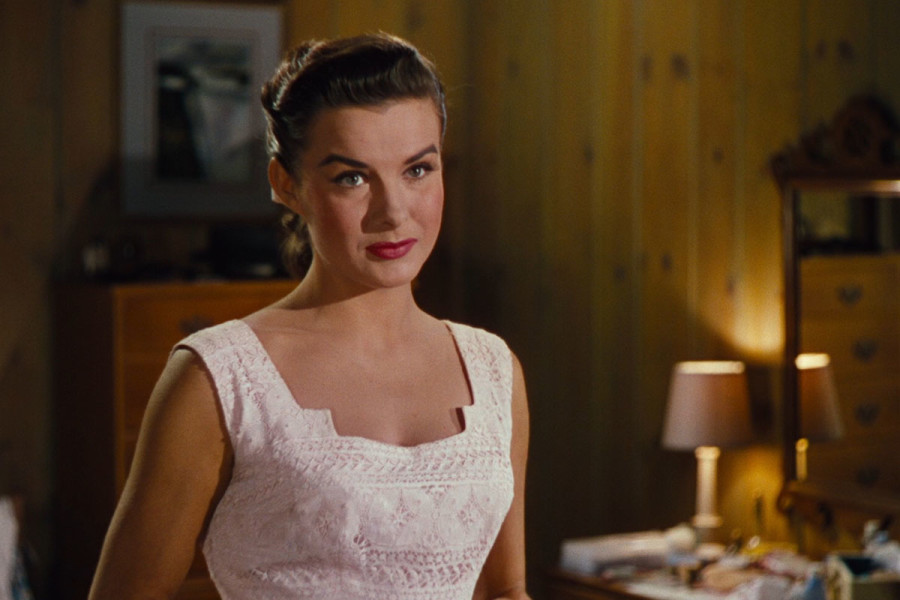 The host of the hit podcast You Must Remember This, film historian Karina Longworth has developed a huge following among cinephiles around the world. As we welcome Karina to TIFF Bell Lightbox to present a special screening of Henry King’s* Wait Till the Sun Shines, Nellie, we are pleased to share this excerpt from her forthcoming book Seduction: Sex, Lies and Stardom in Howard Hughes’s Hollywood about Nellie star Jean Peters’ introduction to Hollywood in 1945 and her courtship by (and eventual marriage to) the mercurial mogul Hughes.

Jean Peters ended up in Hollywood by accident — and stayed against her will. As a junior at the University of Ohio, she had won a beauty contest prize: a trip to Hollywood and a contract at 20th Century Fox. This type of contest usually resulted in a token screen test, a thank-you-very-much, and, after a week or two, an invitation to go home. Jean shot her screen test, spent the rest of the week sightseeing, and then called the studio to ask for her return ticket. She was told that she couldn’t leave town — she was under contract. But they weren’t giving her anything to do, and the novelty had worn off, so after a few more weeks finally Jean decided, the hell with it, and bought herself a train ticket back to Ohio. From the station pay phone, as one version of the story goes, Jean called her handler at Fox, thanked him for everything, and told him she regrettably had to return home. Then she hung up and boarded the train. The Fox flunky then ran into studio chief Darryl Zanuck’s office and demanded that he watch Peters’ screen test. Zanuck reluctantly did, and when it was over, he demanded that someone track down Jean, get her off the train to Ohio, and send her back to Los Angeles.

The more conspiracy-minded believed that Howard Hughes, who was not technically involved in the management of Fox but was a friend of Zanuck and a major stockholder in the studio at the time, had been keeping tabs on Peters from the moment of her arrival in Hollywood, and even though they had not yet met in person, when he found out she had left town he ordered the studio to order her return.

Nellie is a dutiful wife, at first, churning out children and keeping house while her husband continues to lie to her that they will someday leave the small town for the big city. But as time drags on, Nellie starts to lose her ability to buy in to the life her husband has locked her into, and she breaks from the chains of what’s expected of her. She becomes the first woman in their small town to wear lipstick, and indulges in a flirtation with a married man. When Nellie finally finds incontrovertible proof that her husband has been deceiving her for their entire marriage, she boards a train for Chicago with the other man. A shocking twist follows. By the end of the film, you realize that what was really shocking is that for even part of its running time, this deeply strange movie about the darkness that underlines the American experience sympathized with a female character who wasn’t satisfied playing her role in an archetypical cornfed domestic drama.

Throughout her time onscreen, Jean Peters is fierce and feisty. When Nellie gets mad, Peters spits out a rage that feels uncomfortably naturalistic, like a precursor of the kind of acting Gena Rowlands would be doing under the direction of her husband, John Cassavetes, in the 1970s. Wait Till the Sun Shines, Nellie was not the film that made Jean Peters a star — that was Viva Zapata!, a turgid but high-profile and well-received Elia Kazan effort in which both Peters and Marlon Brando donned brownface to play Mexicans — but Nellie was the film that distinguishes her, in retrospect, as a real actress.

Peters’ star-making process took some time. In a “Tintype” profile of Jean, published in March 1948, Sidney Skolsky presented Peters as almost painfully down-home. Noting that she lived on a farm in Ohio until her arrival in Los Angeles two years earlier, Skolsky wrote that Jean had yet “to become Hollywood. She likes to think she economizes by making her own dresses.” In addition, Skolsky claimed that Jean didn’t know how to dance, was “a better than average skeet shooter,” and “eats three big meals a day and munches between them.” Skolsky was not the only one to notice Jean’s lack of polish. “While Jean was pretty,” Sheilah Graham allowed, “[s]he was not particularly chic. She made her own clothes and had no use for a razor or depilatory. Jean was determined to remain as nature made her.” 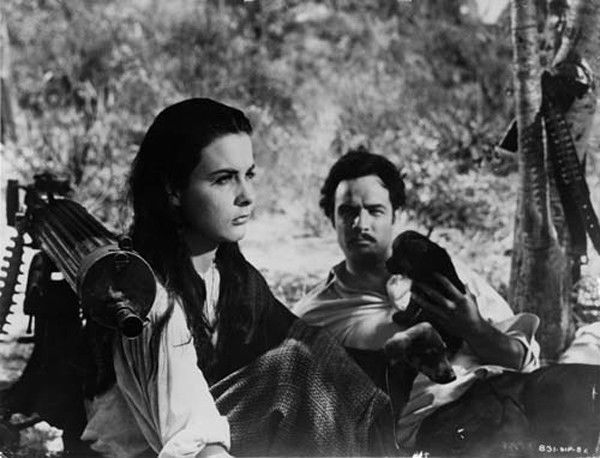 Jean Peters with Marlon Brando (and puppy) in Viva Zapata!, 1952

By 1949, Jean had made just three films since her arrival in Hollywood three years earlier, and she hadn’t yet captured the imagination of either the public or the men in power at Fox who could have pushed for her to be cast in more movies. Around this time the coverage of Jean began to change, reflecting an effort to jump-start her stalling career by transitioning her star persona into something more conventionally glamorous. She was graduating to more important roles in the process (the heavily hyped Zapata, for which Fox chief Darryl Zanuck personally selected Jean, was a big break). Now gossip queen Hedda Hopper latched on to Jean’s guarded “real” life as a source of mystique. In a March 1952 Photoplay profile, Hopper, without naming Hughes, implied that Jean’s unwillingness to offer her personal life up for public consumption began when she was shooting Captain from Castile on location in Mexico. “One of the most eligible bachelors landed his plane there,” Hopper wrote. “Whereupon the place swarmed with reporters and photographers — and the days of Jean’s free give-and-take ended abruptly.” With that, Hopper added, an “iron curtain descended on her life.”

If her private life was increasingly hidden, Jean was working more than ever. Nineteen fifty-three would be the only year of her career in which she’d have starring roles in four feature films, including the movie in which Jean gave her finest performance, in the most difficult and, to modern eyes, problematic role of her career. In Pickup on South Street, Peters played Candy, a sometime streetwalker who finds herself on the road to redemption after discovering that the ex-boyfriend for whom she’s been working as a courier is a Communist spy. When pickpocket Skip (Richard Widmark) steals a cache of microfilm that Candy was unwittingly transporting to the enemy, she tries to get it back, and finds herself instantly attracted to the thief. What follows is an unsettling and unabashedly sexualized depiction of domestic violence.

Pickup on South Street was read by the movie press as evidence that Jean Peters’ transformation from tomboy country girl to sex goddess was complete. In interviews, she insisted that this wasn’t the case. She complained that the expectations that went along with being a star on the “sexwagon” could turn “tragic for the career and for the private life, too.” Candy, she said, was an aberration: “I love a flashy, sexy role — when it’s in character. But to be built up purely as a sex queen — no thanks.” As if deliberately throwing shade at Hughes’ handling of bombshell star of The Outlaw Jane Russell, Jean said she thought “sex has been overworked by Hollywood. Take bosoms, for example. They have been so over-exploited that nobody even notices them much anymore.”

This criticism of Hughes’ go-to film marketing strategy aside, seven years after their first meeting, Jean and Howard were still involved. Sam Fuller saw evidence that Hughes was not only still in Jean’s life, but was, in a sense, directing it. During the rehearsal period before shooting Pickup, Jean would arrive every day on the Fox lot in a car with driver. The driver would wait right outside Fuller’s bungalow all day while they rehearsed, sunglasses on, a newspaper stretched out on the steering wheel. “I couldn’t make out his face,” Fuller recalled, “but I knew the big guy wasn’t just reading. He was constantly keeping an eye on Jean, too. When we finished the session, Jean went outside and got into the front seat of the waiting car and they drove away. On the second day of rehearsal, it became pretty obvious that the driver was her boyfriend.”

The last couple of days of rehearsal, Widmark and Peters went through the paces of their highly sexually charged scenes together. Fuller realized that from where Jean’s boyfriend was parked, he could sit in his driver’s seat and see through the window of the bungalow and get an eyeful of Jean and the actor going at it. It was only then that one of Fuller’s secretaries told him that Peters’ “chauffeur” was Howard Hughes.

Karina Longworth on Wait Till The Sun Shines, Nellie