Jacqueline Stewart on the Politics of Film Preservation 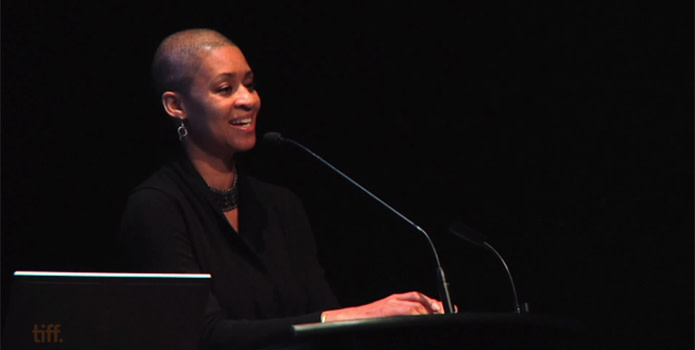 Jacqueline Stewart on the Politics of Film Preservation

Film scholar Jacqueline Stewart delivered a lecture on the "Politics of Film Preservation", focusing on Spencer William's The Blood of Jesus, the films of Oscar Micheaux, and the Tyler Texas Black Film Collection.

Accompanying a screening of the Spencer Williams-directed film, The Blood of Jesus (1941), film scholar and curator, Professor Jacqueline Stewart presented a lecture entitled "The Politics of Film Preservation: The Making of the Tyler Texas Black Film Collection." The Blood of Jesus is part of the celebrated Tyler Texas Black Film Collection – a collection of films (previously thought to be lost) that were discovered in an East Texas warehouse in the early 1980s. The collection was hailed by filmmaker/actor Ossie Davis as "the missing link in Black cinema." Since their discovery, the associated films in the collection have been copied to and circulated widely in various formats, from celluloid film to videotape to streaming digital video. Using Yhe Blood of Jesus, as well as the films of Oscar Micheaux, Stewart outlined some of the issues that have emerged in preservationist efforts to establish the importance of films from marginalized groups. Other topics included: media literacy, the history of race films, and the importance of archives and archivists to the work of scholars. A Q&A with the Higher Learning audience followed the lecture and screening. This Higher Learning event was held on October 29, 2010 at TIFF Bell Lightbox.

The Blood of Jesus (as well as other films in the Tyler Texas collection) are made available for free streaming or download by the Southern Methodist University Libraries, Digital Collections click here.