“A triumph of pure style and sensual excess.” —David Thompson 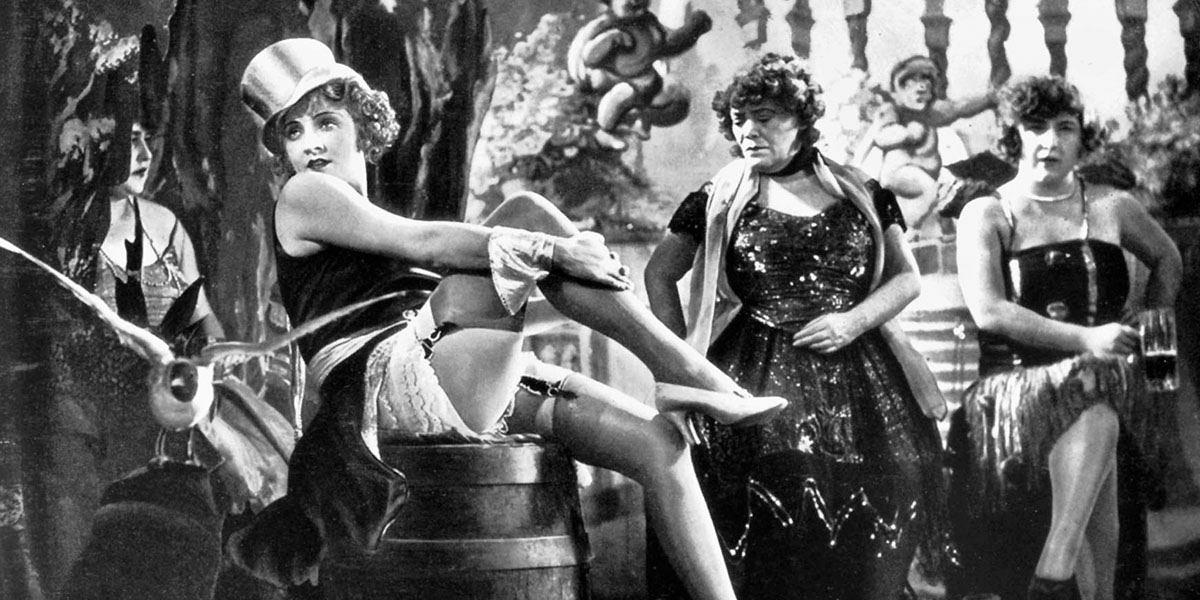 “MARLENE DIETRICH — Your name, at first the sound of a caress, becomes the crack of a whip. When you wear feathers and furs and plumes, you wear them as the birds and animals wear them, as though they belong to your body.” —Jean Cocteau

She was an insolent cipher, affecting indifference with a studied nullity of expression that could read as contempt or mere world-weariness; he was an arrogant autocrat, the auteur uber alles, refuting any claims of collaboration despite working with superb cinematographers, scriptwriters, and craftspeople. Both were isolated in their self-created images: she a walking semiotic system with her scythe-like eyebrows, light-sculpted cheekbones, and outfits either androgynous or outlandish, he with a fake “von” inserted into his name to amp his naturally supercilious disposition; he too tended to flamboyant attire and an ironic reserve akin to disdain, and more than matched her ability to stare people into submission (his cranky memoir, Fun in a Chinese Laundry, relentlessly disparages, well, just about everybody). Was it symbiotic narcissism that allowed Marlene Dietrich (her forename cobbled from her double given, Maria Magdalene) and Josef von Sternberg to make seven unforgettable films together?

Gladly submitting to the directorial strictures that drove other actors to tears, or off the set altogether (such as Joel McCrea, who fled from The Devil is a Woman), Dietrich bestrode the worlds von Sternberg created for her — deliriously “exotic” renditions of Spain, Morocco, Russia, China, Germany, Austria, and, somewhat reluctantly, America — their artifice increasingly dense with scrims and screens, veils and halation, smoke and mirrors, as the director’s ethereal visual style grew ever more baroque. Susan Sontag called it “outrageous aestheticism” in her famous essay on camp, but ironically, it was that very outré quality that made the films so enduringly influential: the duo’s admirers (and pilferers) include Jack Smith, Kenneth Anger, Werner Schroeter, Luchino Visconti, Jean Cocteau, Ulrike Ottinger, Rainer Werner Fassbinder, and that latter-day Dietrich, Madonna. (This roll call should attest to the gay appeal of Dietrich’s brazen bisexuality and von Sternberg’s high style.) That Dietrich and von Sternberg’s fans also included such figures as Adolf Hitler (von Sternberg claimed that the dictator had all the German prints of The Blue Angel destroyed, save the one he kept and watched repeatedly) and Ayn Rand may give one pause, but not surprise.

Von Sternberg, who often claimed to have done most everything on his films, was the rare director invited to join the cinematographers’ union. Proclaiming that “a shaft of white light used properly can be far more effective than all the colour in the world,” he taught Dietrich the precise placement of the key light that would bring out the celebrated planes of her face. Even after they ended their love affair, and then their collaboration, Dietrich relied on von Sternberg’s modus, driving lighting cameramen and cinematographers to anger or grief with her demands for the positioning of the key and fill lights. Without the star he had helped create (though he later stated that “I gave her nothing that she didn’t already have”), von Sternberg’s career foundered in a series of abandoned, aborted, or compromised projects; those he did manage to complete were failures, though the film he was proudest of (and his last), the Japanese production The Saga of Anatahan, earned a cult following. Dietrich’s stardom also faltered somewhat, though the actress rebounded from her post-Sternberg slump with such hits as Destry Rides Again, and endeared herself to the American public during World War II by revoking her German citizenship and tirelessly touring the theatres of war to entertain Allied troops.

Though she was seemingly impervious to nostalgia, the Dietrich who, early in her career, had inscribed a photograph for von Sternberg with “I am nothing without you,” often found herself on the set of another director feeling bereft of her mentor’s attentions. That she missed his imperious mastery is plaintively evident in the cri she often whispered into the microphone, so others would know of her desolation: “Where are you, Jo?”

Anthony Oliveira on The Blue Angel

The Devil is a Woman

Witness for the Prosecution

The Docks of New York