“I was born when she kissed me”: The Love Song of Bogart & Bacall

On and off the screen, the unlikely lovers were Classic Hollywood’s ultimate power couple 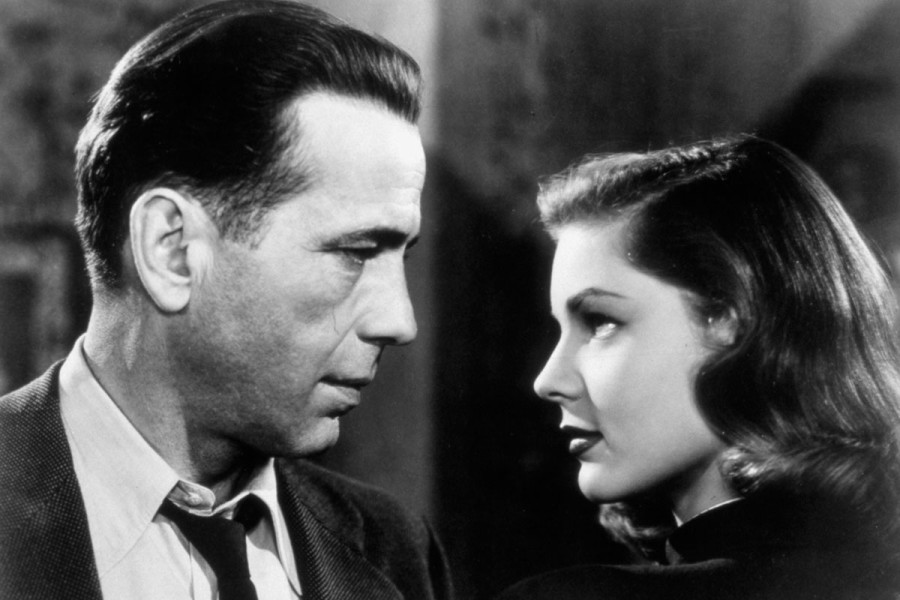 Though our headline’s refrain was directed at Humphrey Bogart’s co-star Gloria Grahame in the classic In a Lonely Place, few words could better describe the remarkable change that took place in the veteran leading man’s life when he met his young co-star Lauren Bacall on the set of To Have and Have Not. The alliteration of their last names seemed in itself to suggest their intertwined destinies, as the cliché about opposites attracting was never more evidenced than in this couple’s initially hesitant romance and passionate marriage: the sultry, blonde Bacall two decades younger than the dark, hard-drinking Bogart (May-December, as the formula has it), Jewish to his Episcopalian, she raised in economic want in the Bronx while he grew up well-off in the Upper West Side home of a prominent heart surgeon whose ostentatious name (Belmont DeForest Bogart) verged on mock aristocracy.

Like her crisp diction and his slightly slurred delivery (not to mention the fact that her voice was also famously huskier than his), Bacall and Bogart’s screen personae appeared obverse: she chic, cool, and elegant, he flinty, volatile, and assertive, his characters often prone to cynicism and bitterness. Our very selective retrospective features all of the films in which the B-B team appeared together, along with several of their solo triumphs — and offers a mini-John Huston retrospective in the process. Better to have than have not. 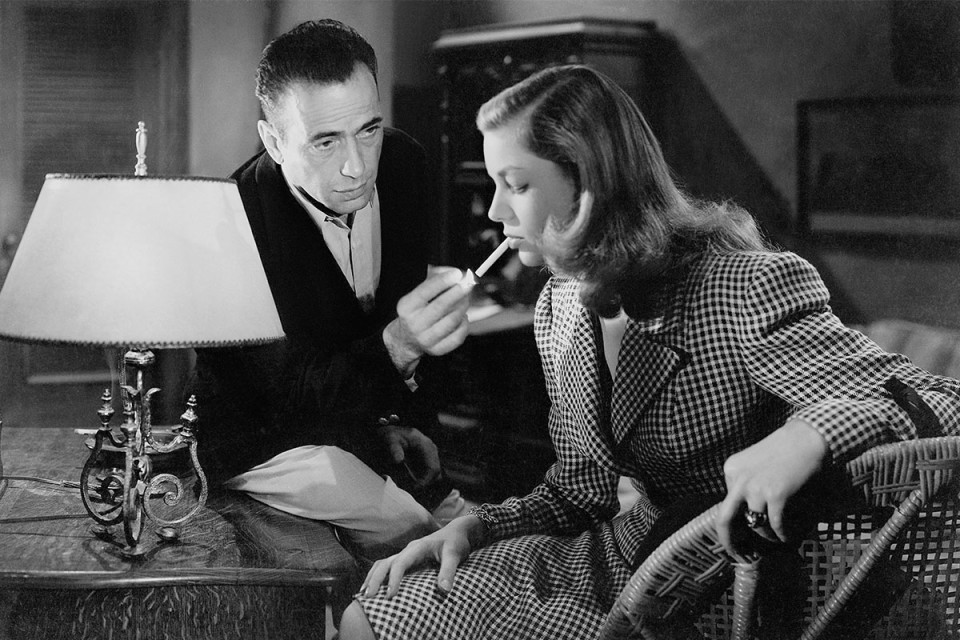 To Have and Have Not

Very loosely adapted from the eponymous Hemingway novel, To Have and Have Not introduced Lauren Bacall — at the time a 19-year-old model who had been discovered by director Howard Hawks’ wife on the cover of Harper’s Bazaar — as “Slim,” an American itinerant on the French-controlled island of Martinique who falls hard for Harry “Steve” Morgan, the taciturn owner of a fishing boat (Bogart, natch). Despite being reportedly paralyzed by fear in front of the camera, Bacall delivered quite the show in her first screen appearance, lasciviously delivering such instantly famous lines as “You know how to whistle, don’t you, Steve? You just put your lips together and — blow.” 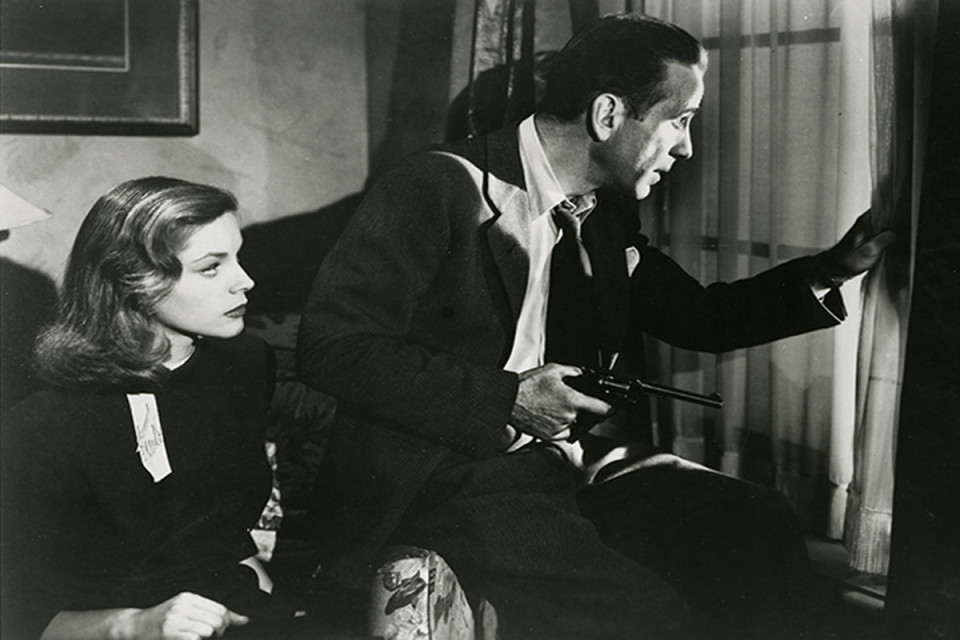 After their success in To Have and Have Not, Bogart and Bacall reteamed with director Howard Hawks for this classic adaptation of the Raymond Chandler novel, and their verbal sparring was never tarter or more sexually suggestive. Bogart plays private dick Philip Marlowe, who is hired by a wealthy retired general to get his wild youngest daughter out of a fix involving gambling debts. When the general’s other daughter, a crisp number with the imposing, triple-barrel name of Vivian Sternwood Rutledge (Bacall at her coolest), suggests that murder may also be included in her sister’s shenanigans, Marlowe is drawn into a deadly web of lies, betrayal, and blackmail. 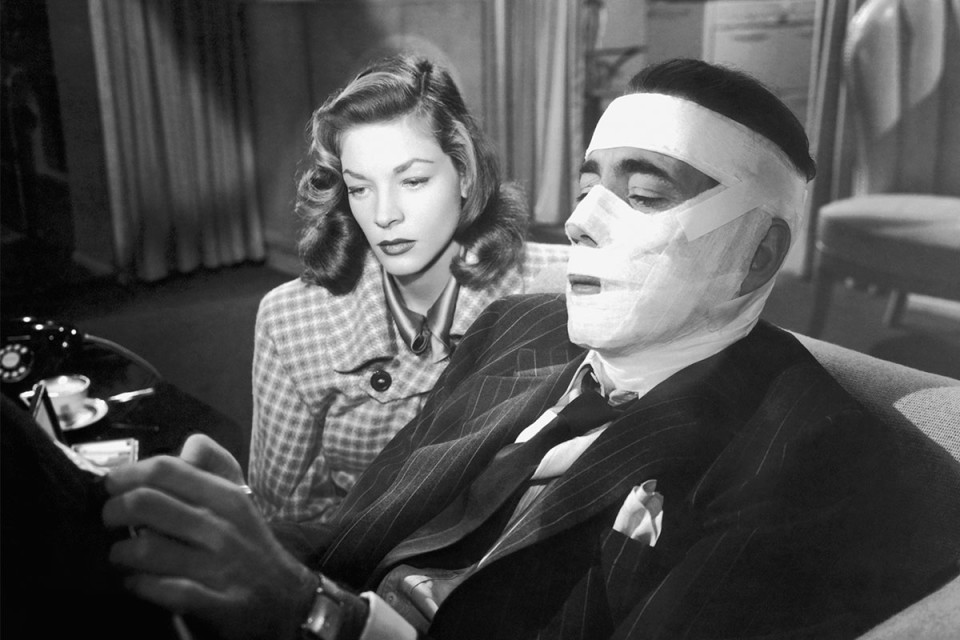 B-B are “In danger as violent as their love!” in this deluxe film noir, in which Bogart plays a wrongly accused man who escapes from San Quentin and undergoes plastic surgery on his face to elude the police; Bacall is a part-time painter who, convinced of his innocence, stashes him in her posh apartment until his visage heals. Adapted from a David Goodis novel, Dark Passage is perhaps most famous for its use of first-person camera throughout the film’s tense opening sequences, limiting the audience’s view to that of Bogart’s eyes. 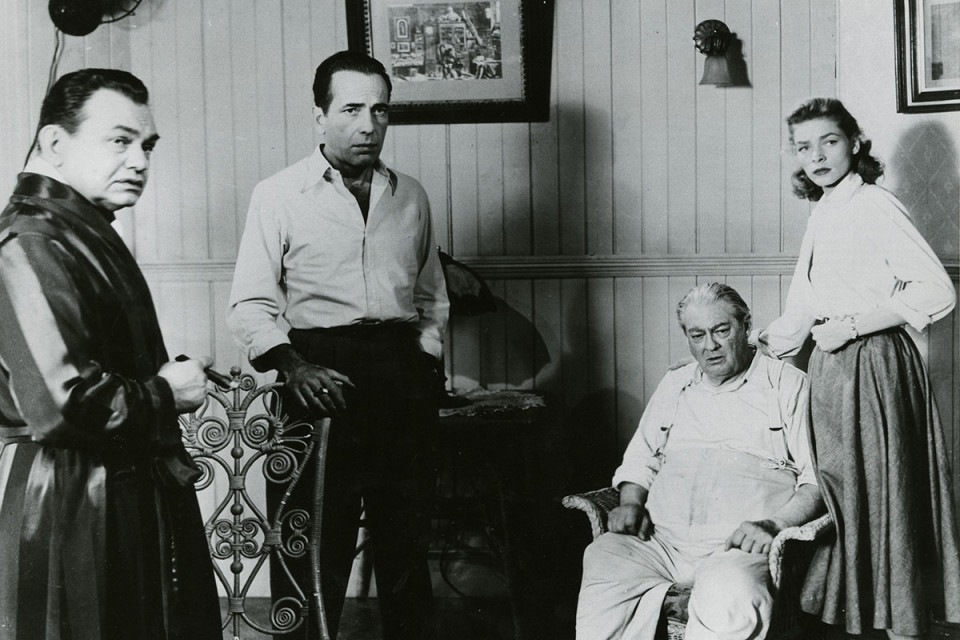 The final pairing of Bogart and Bacall, this great, gripping film noir takes place at an isolated hotel in the Florida Keys, where a bitter war vet (Bogart) is held hostage along with his old pal’s widow (Bacall) by a gangland boss on the lam (Edward G. Robinson). 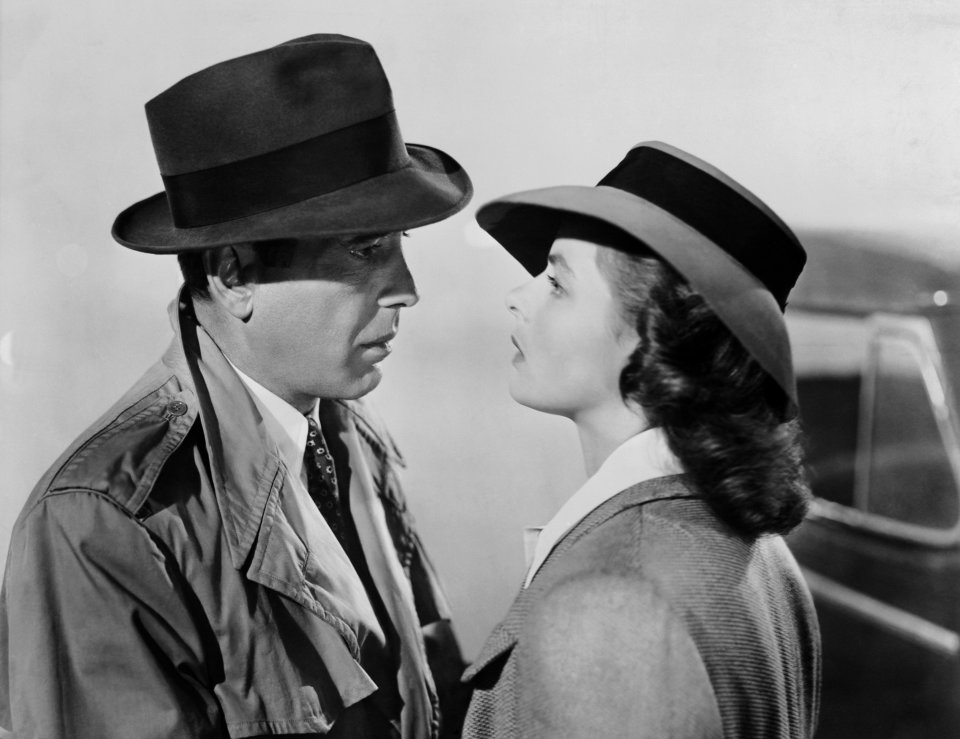 Humphrey Bogart and Ingrid Bergman are star-crossed lovers trapped between love and loyalty in the ultimate Hollywood romantic classic. Bogie plays a Yankee ex-pat whose air of world-weary cynicism is shaken when his old flame (Bergman) turns up at his nightclub-casino in Vichy-controlled Morocco one fateful night with her husband, a fugitive resistance leader, seeking a crucial letter of transit that will get the hunted man to America. A remarkably rich supporting cast ensures that the two leads don’t hog all the glory, and the expert direction of Michael Curtiz unerringly balances the elements of suspense, romance, comedy, and stirring wartime propaganda. 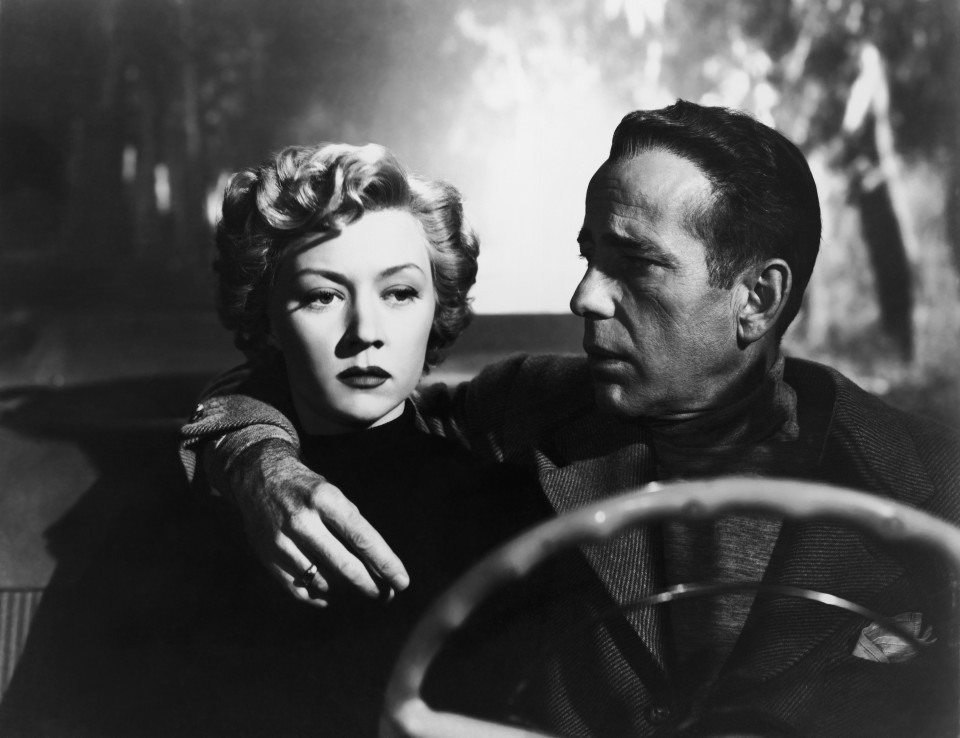 In a Lonely Place

Bogart was never better than as Dixon Steele, a bitter, burned-out screenwriter accused of murdering a hatcheck girl; Gloria Grahame exudes tough vulnerability as the girl next door who gives Steele a false alibi, has her faith in his innocence shaken when she witnesses his homicidal rage, and begins to fear she could be his next victim. One of the greatest of all American films, director Nicholas Ray’s brooding and unbearably tender love story turns Hollywood into the loneliest place on earth. 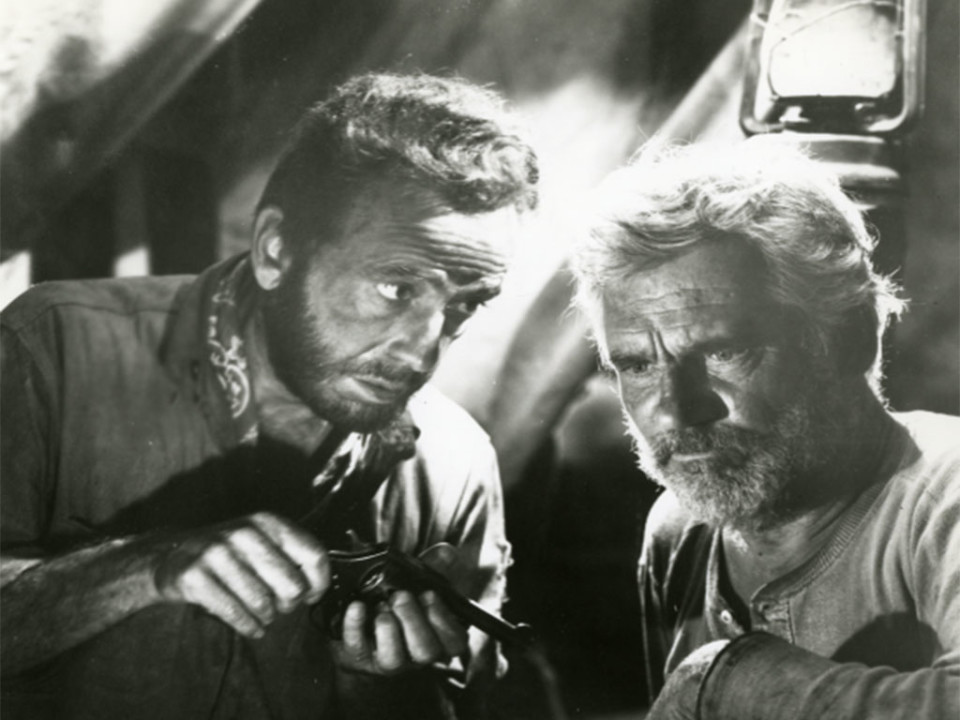 The Treasure of the Sierra Madre

“Wait till you see my next movie!” Bogart reportedly crowed to a critic, “I play the biggest shit you ever saw!” Said shit is Fred C. Dobbs, a thoroughgoing rotter whose greed for gold turns him murderously against his prospecting partners as they search the Sierra Madre to find their fortune. Director John Huston and his father Walter (who memorably plays the grizzled old coot who heads the expedition) both scooped up Academy Awards, though Bogart was not even nominated for one of his greatest (and most uncharacteristic) performances. 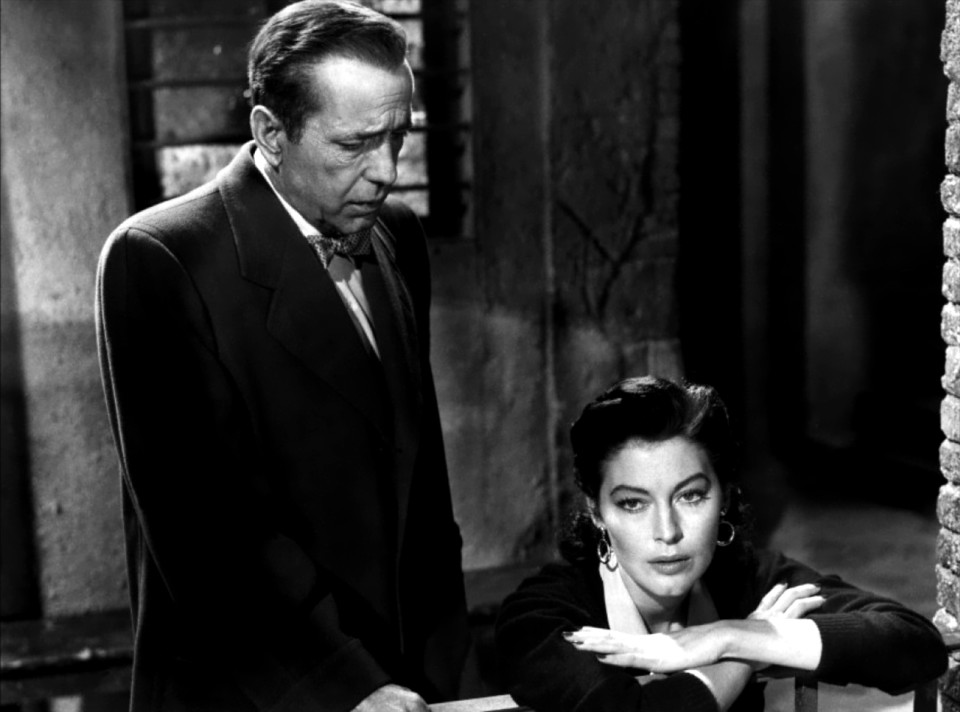 Ava Gardner stars as a ravishing Madrid cabaret dancer who is discovered by a washed-up film director (Humphrey Bogart) and transformed into a screen superstar, only to find that her life of luxury is a lonely one — especially after she marries a dashing Italian count who proves unable to satisfy her emotional or sexual needs. Bogart had one of his greatest roles in director Joseph L. Makiewicz’s portrait of Hollywood in extremis, playing an embittered artist whose cynicism is a cover for regret; the scene in which he attacks a studio publicist shocks no matter how often you’ve seen it. 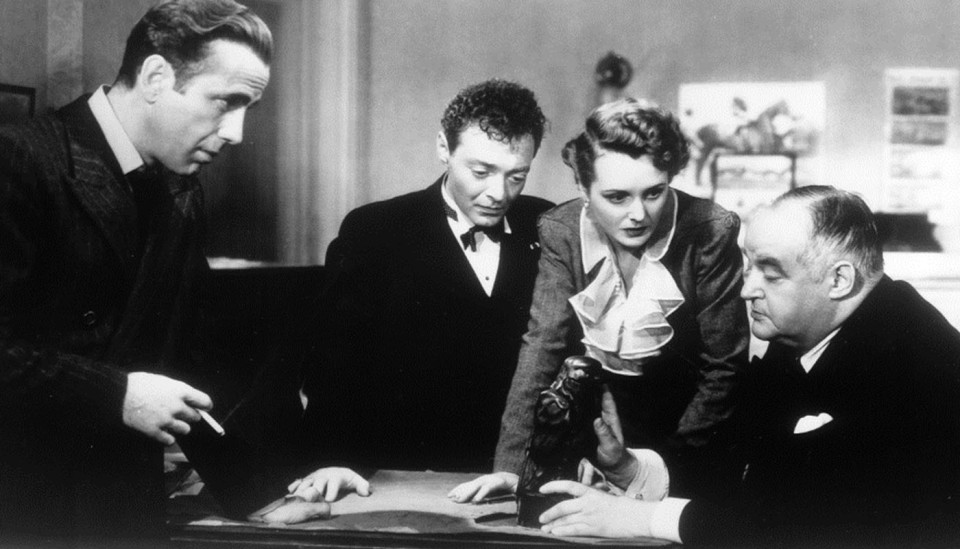 John Huston’s superb adaptation of a twisty, cynical Dashiell Hammett mystery made Bogart an instant star as cool San Francisco gumshoe Sam Spade, who becomes embroiled in the murderous search for a richly bejewelled statuette of a falcon. It’s hard to know who amongst the supporting ensemble is more outrageously entertaining as the miscreants all pursue the gem-heavy bird: Mary Astor as a femme fatale who cannot keep track of her own lies; Sydney Greenstreet, snacking on the scenery as the aptly named Kasper Gutman, whose girth is exceeded only by his ruthlessness; Peter Lorre, camping it up as Gutman’s fey, saturnine partner in crime; and wild-eyed Elisha Cook, Jr. as a two-bit hoodlum who violently bridles at Spade’s smirking scorn. 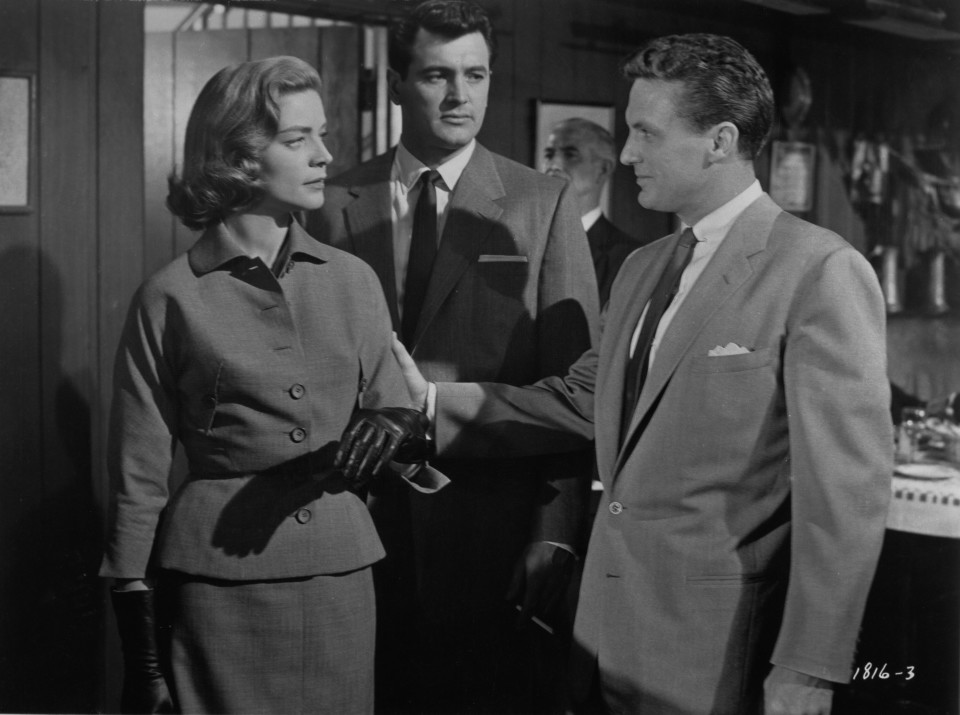 Written on the Wind

Bacall is the calm at the eye of the storm in Douglas Sirk’s deluxe melodrama, playing a New York executive who marries a high-flying Texas playboy (Robert Stack) after a whirlwind courtship and is dragged into his family’s den of dysfunction, where she comes increasingly to lean on one of the clan’s oldest and most faithful friends (Rock Hudson) — much to the consternation of her increasingly paranoid and self-destructive husband. 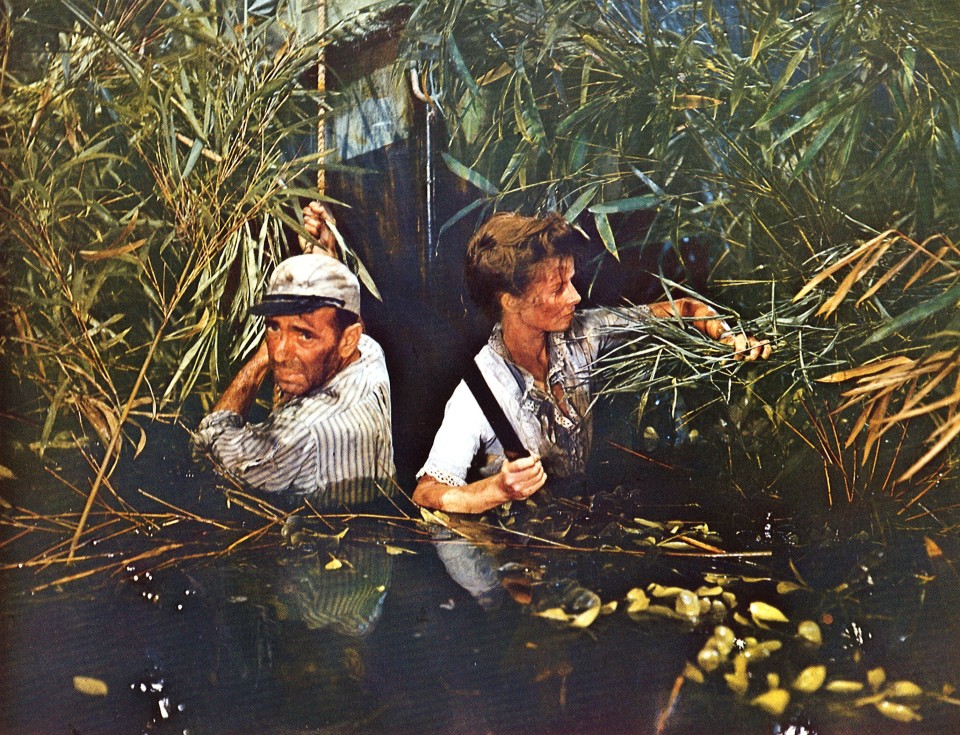 Bogart won his only Best Actor Oscar for his performance as the rum-guzzling Canadian (!) skipper of a less-than-regal river skiff in 1914 German East Africa, who is reluctantly recruited for the war effort when a prim but patriotic British missionary (Katharine Hepburn) hatches a plan to destroy a German gunboat with homemade torpedoes. En route, the unlikely team of teetotalling spinster and coarse Canuck is tested every step of the dangerous way by churning rapids, swarming mosquitoes, and violent storms. 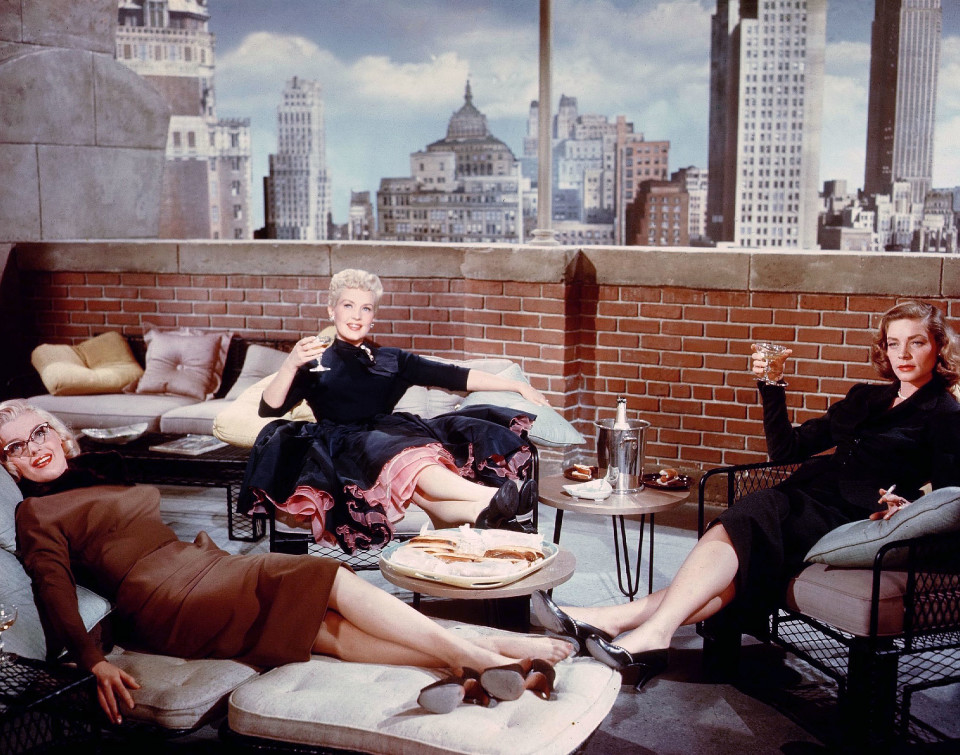 How to Marry a Millionaire

One of the first films shot in CinemaScope, its glorious wide screen bursting with brio and blondes, How to Marry a Millionaire features Marilyn Monroe, Lauren Bacall, and Betty Grable as three impecunious roommates who land a Sutton Place penthouse for the season and use it as a millionaire magnet (feminism seems very far off in the early ’50s). For women of modest means pawning furniture to pay the bills, the three gold diggers have well-stocked closets: Millionaire offers an endless parade of ’50s fashion, and won the Academy Award for Best Costume Design. 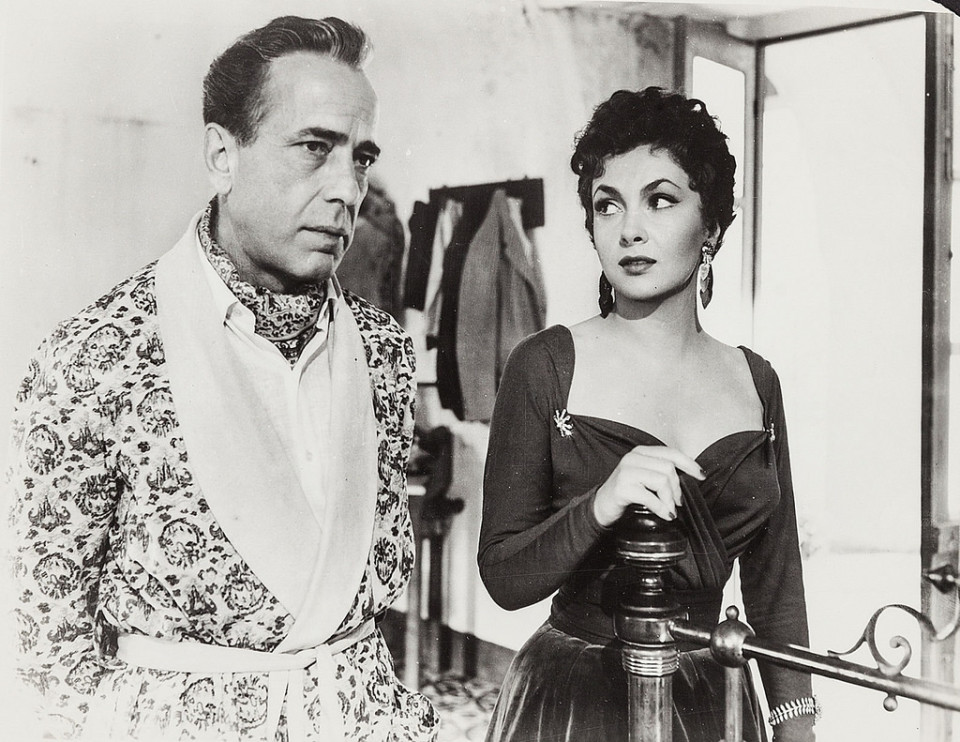 John Huston’s shambolic adventure comedy stars Bogart as Billy Dannreuther, a man of inaction idling away on the Amalfi Coast with his Italian wife Maria (Gina Lollobrigida), who gets wrapped up in a caper involving a shady uranium deal in East Africa. A bottle-blonde Jennifer Jones plays a generous font of lies with the improbable name of Gwendolen Chelm, who makes eyes at Billy while Anglophile Maria flirts with her stuffy Brit husband; the cast is rounded out by the bug-eyed pair of Robert Morley and Peter Lorre, whom Jones’ Gwendolen instantly identifies as “desperate characters: not one of them looked at my legs.” 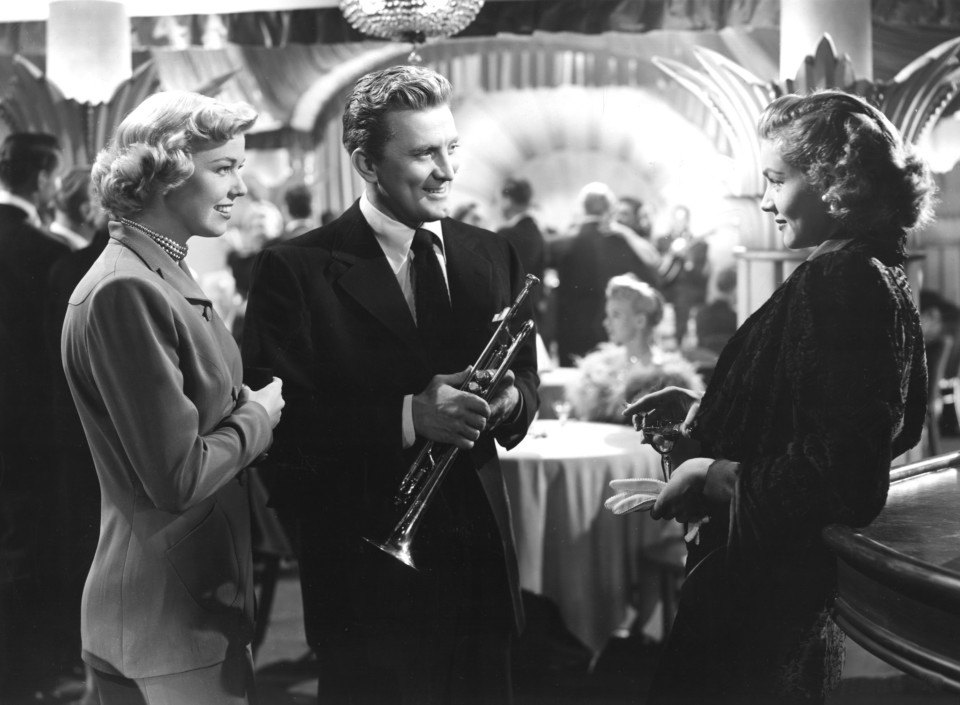 Young Man with a Horn

Film noir meets musical in this engrossing drama starring Kirk Douglas as Rick Martin, who buys a trumpet from a pawn shop, joins a big band, and finally moves to New York to start his own dance orchestra; Lauren Bacall is elegance itself as Rick’s paramour and eventual wife Amy North, a neurotic heiress and class-conscious patron of the arts dealing with the demons of her mother’s suicide. On the cusp of superstardom, Doris Day plays vocalist Jo Jordan, who is in love with Rick but gives him up for her friend Amy. The exciting music score is by Harry James, and Hoagy Carmichael (Bacall’s co-star in her debut To Have and Have Not) brings a jolt of authenticity to the film as Rick’s sidekick.

To Have and Have Not

In a Lonely Place

The Treasure of the Sierra Madre

Written on the Wind

How to Marry a Millionaire

Young Man with a Horn