Here's looking at you, Jane 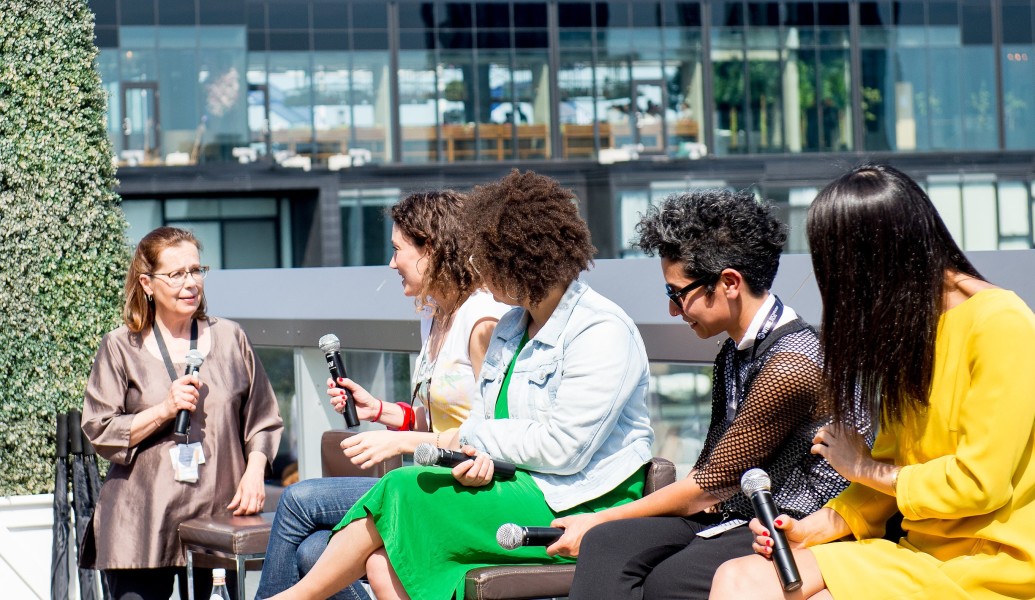 In February 2019, TIFF announced that longtime programmer Jane Schoettle would be stepping down from the Toronto International Film Festival programming team after 21 years. We asked Jane if she could give Members an exclusive interview about her time with TIFF, including some parting words and programming wisdom.

TIFF Loyalty team: What has been the biggest surprise about working for TIFF over the last 21 years?

Jane Schoettle: Well, it's not directly related to TIFF, but ancillary to it: it's the speed with which the issues of gender and racial diversity have been forefronted in the filmed content arena. As someone who came of age in terms of social justice issues in the ’60s, ’70s, ’80s (Gloria Steinem superfan), I had just about lost hope that we would see any efforts towards parity in my lifetime. Years of grassroots activism and decades of poking the bear seem to have finally borne fruit. While we have a very, very long way to go, I think we have reached a point from which there is no turning back, and I'm immensely gratified by that. I think the creative industries have led the way, and as long as organizations like TIFF continue connecting artists and audiences to socially progressive ideas and issues, there should be optimism for the future.

Do you have a most memorable Festival?

The most memorable films were those from first-time filmmakers that I presented as world premieres — from Jason Reitman's Thank You for Smoking to Maren Ade's The Forest for the Trees. There's something so special and privileged about knowing that you are about to show a discerning audience something that will shift the talent paradigm, and introduce a great new talent onto the world stage. It doesn't get better than that.

You have been championing female filmmakers throughout your career and have been an integral part of Share Her Journey. What changes have you seen in the film industry since SHJ launched in 2017?

The public and private conversation has improved exponentially since 2017, in no small part due to initiatives like Share Her Journey. I think people in a position to hire creators are very aware of the need and demand for female voices. Some in positions of power, like Ava DuVernay and Lena Waithe and Cassian Elwes, are walking the walk, and the benefits to the work and culture are almost immediate and measurable. We need more leaders and organizations to not just “tick the boxes,” but to really allow women to speak and create and fail and to get another chance.

To me, the overarching issue is one of money: until women have equal access to financing, we will not have equal opportunity to succeed (and fail), and there is still something of an “old boys'” network in commercial film production. But we're getting there; women around the world are walking into the halls of power and kicking down the doors, one office at a time.

This past year, you've been the producer of TIFF Talent, working with up-and-coming creators. What are you most excited about for the future of Canadian film?

We have remarkable talent in this country. Alongside trees and prairie farmland, it's our greatest resource. We just have to keep it here! I think two things bode well for the future of Canadian film. The first is the opportunity that all manner of new digital streaming services and platforms provide, because getting our films in front of eyes across the nation has always been difficult due to our vast geography and the domination of the culture to the south.

The second is the very nascent stirrings of private investment into film, which I think needs to be supported. Dependence on government and agency support (of which we have, arguably, the most in the world) has limited thinking around how to fund a film. I'm seeing some creative thinking around this issue. We need to be responsive to the times we are living in and shake up some of the funding and distribution paradigms in existence. There are some creative, interesting companies doing just that. All Canadians have a role to play here — don't just get Netflix, but also support a fledgling Canadian streaming company. That's one of the best ways to support our Canadian talent.

You have a loyal group of Members, patrons, and fans who have been following your film selections for years. What are some guiding principles, tips, and tricks, or who to keep eyes on to help filmgoers continue navigating all the great films at Festivals to come?

I have been around the globe more than a few times, and I can say with complete honesty, sincerity, and belief that TIFF has the most knowledgeable, thoughtful, dedicated, and (sometimes) demanding patrons and fans in the world. This is both heartening and terrifying for a programmer who doesn't want to disappoint, because it's not just about curation. Programmers and festivals can only show what people create; we are the retail end, not the manufacturing. That said, I've come to know and love so many of this magnificent crew of film-crazy folk and will miss them terribly. My advice would be, first: story, story, story. And second: be bold, be brave, and be intrepid in your choices, for the talented programmers here will have provided the best possible cinematic buffet.

Join us in wishing Jane a thrilling new chapter, and in expressing the utmost gratitude for her years of programming. Send her your kind words by clicking HERE.