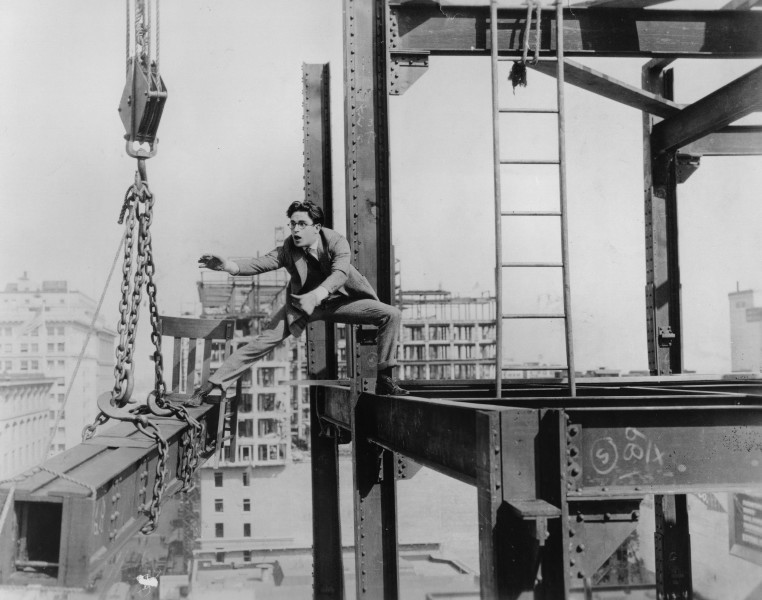 The TIFF Cinematheque retrospective Safety Not Guaranteed: A Century of Harold Lloyd runs from January 27 to February 25.

Long relegated to a distant third in the silent-comedy pantheon after Chaplin and Keaton, Harold Lloyd — the bespectacled Jazz Age everyman whose unflappable energy and daredevil stunts made him the biggest box-office draw of the silent era — has in recent decades been rightfully elevated to the heights of his legendary contemporaries. While he will always be best known for the iconic image of him dangling from a clock face high above the Los Angeles streets in Safety Last!, Lloyd’s immense contribution to silent cinema extends well beyond the “clock movie.” Fast-paced, expertly crafted and often downright astonishing, his films are a treasure trove of modern, sophisticated, and all-round delightful folly.

Where Chaplin was tragic and Keaton stoic, Lloyd was jubilant and, most importantly, relatable — a stand-up go-getter chasing the American Dream with spunk and determination. The “Glasses Character” that he debuted in 1918, so-named for the distinctive bifocals Lloyd began sporting on screen, seemed to somehow capture the striving, optimistic spirit of post-WWI, pre-Depression America. (“There [was] more magic in a pair of horn-rimmed glasses than opticians could have dreamed of,” Lloyd wrote in his autobiography.) And in Lloyd’s case, that can-do spirit was all too real, as he bounced back from a horrific on-set accident that nearly took his life early in his career, and conquered his acrophobia to perform the incredible building-scaling centrepiece of Safety Last!, with the aid of groundbreaking special effects.

Most importantly, behind those glasses was a brilliant comic mind that helped create and refine the shape of screen comedy. These painstaking restorations of Lloyd’s features and shorts, undertaken by the Harold Lloyd Foundation and spearheaded by the comedian’s granddaughter Suzanne Lloyd, ensure that Lloyd’s legacy will only grow in lustre as it enters its second century.

See the classics below with live piano accompaniment at TIFF Bell Lightbox this season. 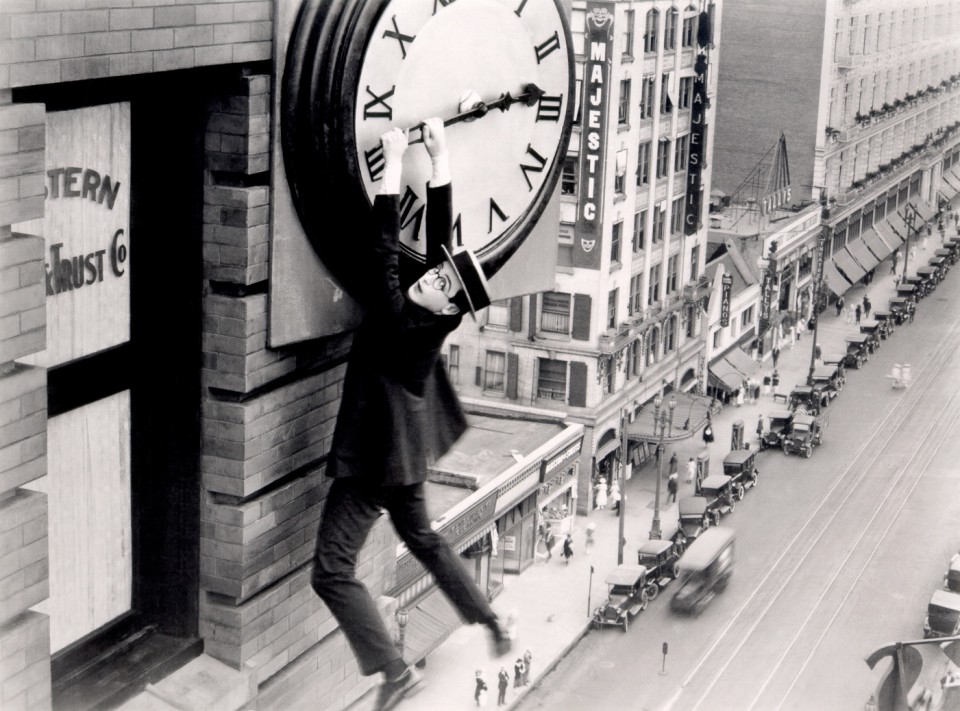 The pinnacle of Lloyd’s trademark “thrill comedies,” Safety Last! is undeniably the comedian’s most revered film, and also contains one of the most famous scenes in cinema history: Harold desperately holding onto the face of a giant outdoor clock as he dangles high above the streets of Los Angeles, an image that became a hyperbolic visual metaphor for the social and economic aspirations of the Roaring ’20s. 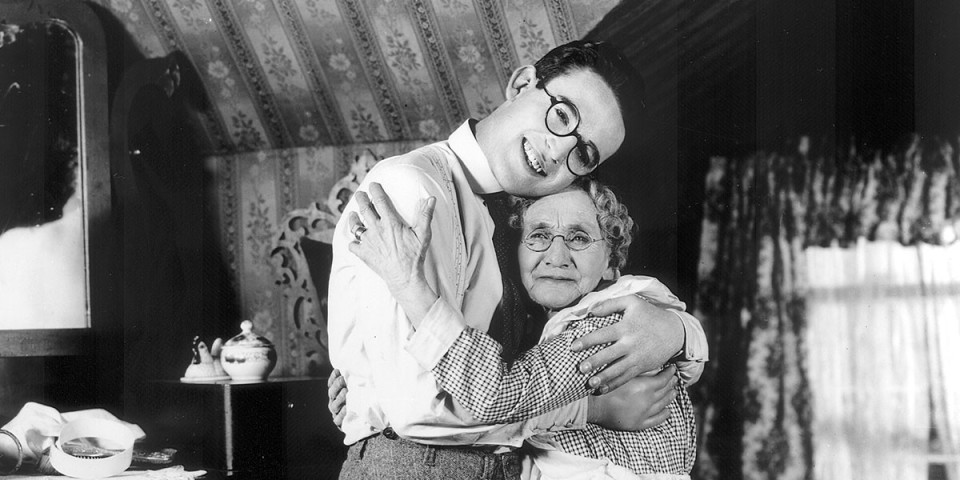 An intended two-reeler that was expanded into a feature, Grandma’s Boy was a monumental critical and commercial success, that was hugely influential on Lloyd’s comic peers: elements from the film’s Civil War flashback scenes (in which Lloyd plays his character’s grandfather) were borrowed by Charlie Chaplin for The Pilgrim and Buster Keaton for Our Hospitality and The General. 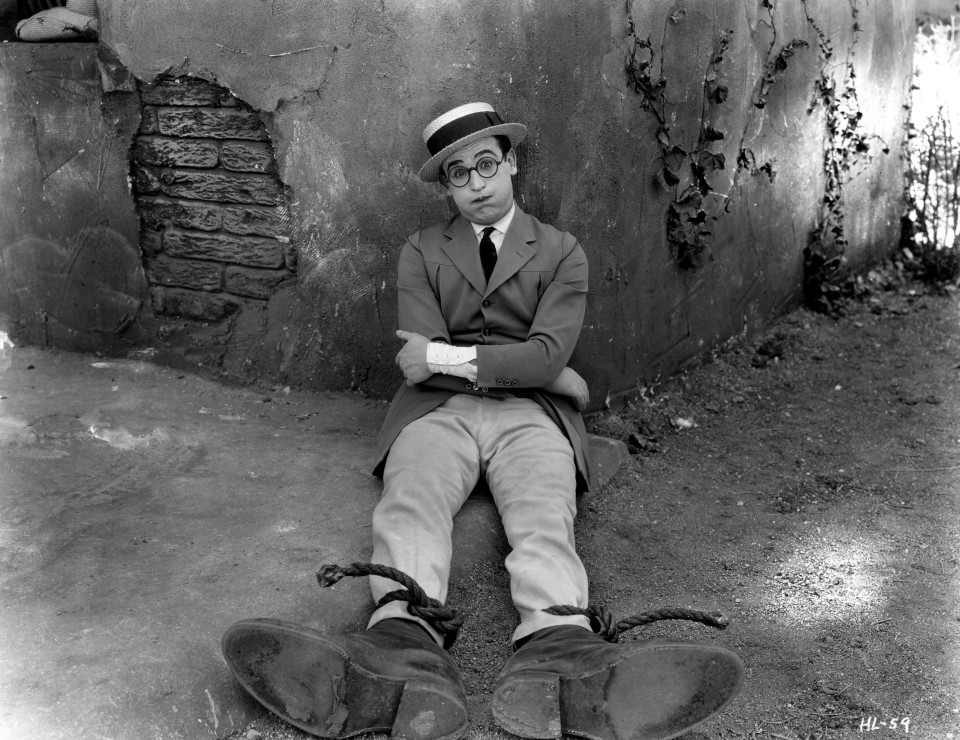 Lloyd plays wealthy, spoiled hypochondriac Harold Van Pelham, who travels to the fictional island of Paradiso to enjoy the recuperative powers of the tropics and has to deal with the inconvenient outbreak of a revolution. 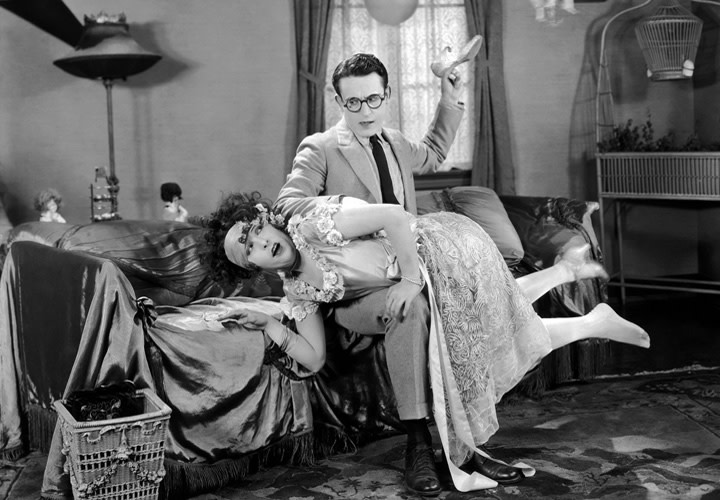 Lloyd’s first independent production after the comedian ended his ten-year partnership with Hal Roach, Girl Shy concludes with one of the most elaborate, daring, and spectacular chase sequences in silent comedy, as Harold commandeers trollies, trains, horses and police motorcycles to prevent his sweetheart from marrying a dastard. 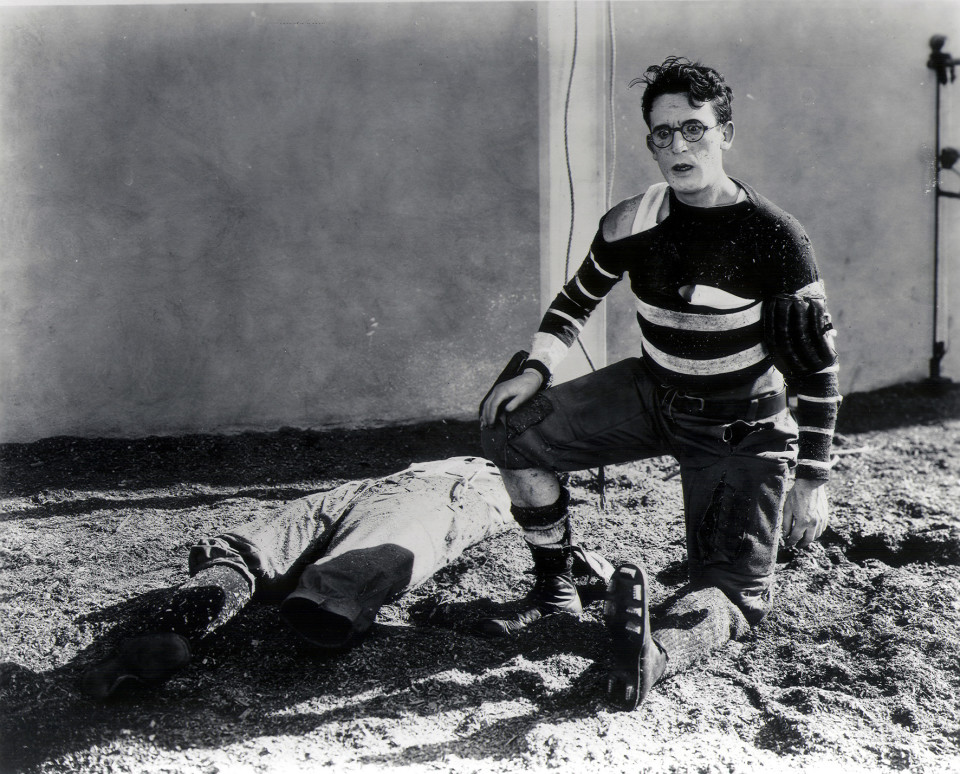 Lloyd’s most commercially successful film and the second-highest-grossing film of the silent era after Chaplin’s The Gold Rush, The Freshman features Lloyd as a nervous, nerdy nobody who lets nothing stand in his way — whether it be a disintegrating suit or an utter lack of athletic skill — as he sets out to become big man on campus. 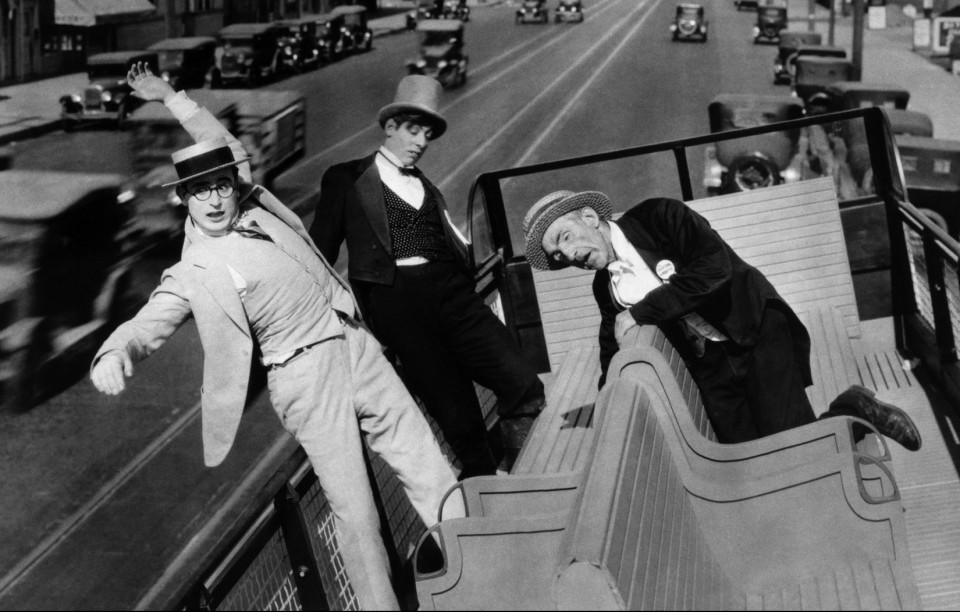 High-living millionaire J. Harold Manners (Lloyd) is forced to rein in his cavorting ways when he falls in love with the do-gooding daughter of a minister who runs a mission on the wrong side of the tracks. Harking back to Girl Shy in its wild automotive climax, For Heaven’s Sake is an underrated gem in Lloyd’s filmography. 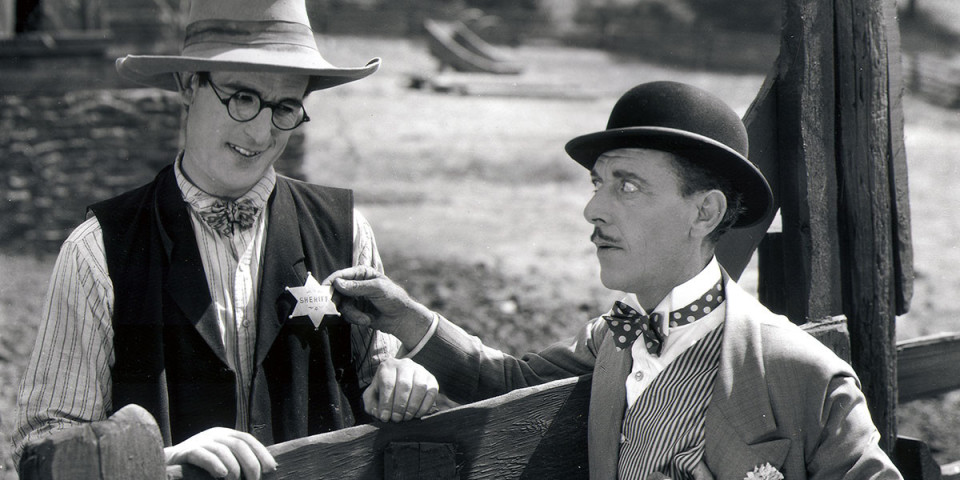 Considered by Lloyd to be his greatest achievement, The Kid Brother features the comic as the timid son of a small-town sheriff, who yearns to follow in his father’s footsteps but is persistently overshadowed by his two beefy brothers. 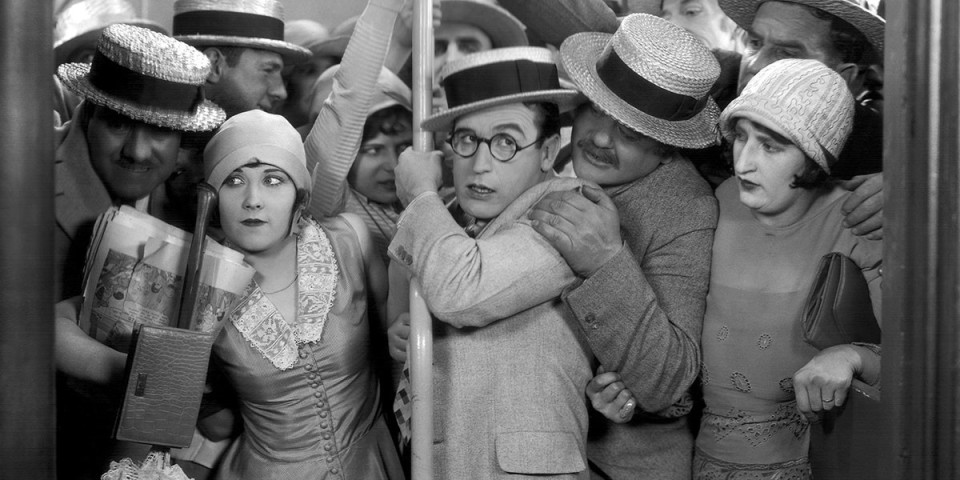 Taking its title from the real-life nickname bestowed upon Lloyd by his father, Lloyd’s final silent film features Harold as an indefatigable go-getter who battles a streetcar magnate in order to save the last horse-drawn streetcar in New York, which happens to be owned and operated by his girlfriend’s father.

Why Worry? preceded by Never Weaken

For Heaven's Sake preceded by Bumping into Broadway