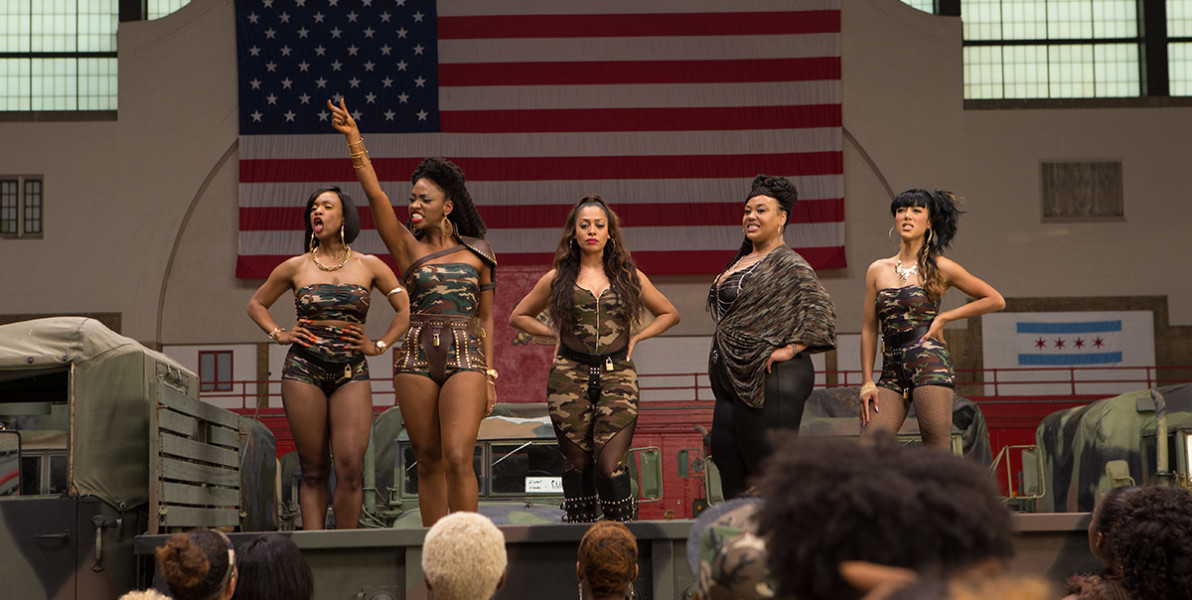 Chi-Raq has its Canadian premiere this week at the TIFF Bell Lightbox. Spike Lee’s latest is a modern adaptation of the ancient Greek comedy Lysistrata, in which Greek women withhold sex from their husbands to compel them to end the Peloponnesian War.

The number of people murdered on the streets of Chicago in recent years has surpassed the death toll of American service members in Iraq.

That’s the statistic behind Chi-Raq. By the way, that catchy conjunction (the blending of "Chicago" and "Iraq") isn’t originally Spike Lee’s; the Chicago rapper King Louie coined it, and people around town just started using it. Then it was on t-shirts and hats, and eventually "Chi-Raq" kind of became a thing.

In Lee’s Chi-Raq, a woman named Lysistrata (played by Teyonah Paris) joins together the women of the South Side to withhold sex until their men — members of rival street gangs — put down the guns and stop killing each other.

If there’s one thing a Knicks fan from Brooklyn definitely gets right about the South Side of Chicago it’s that there’s a lot of sex going on here. I recently finished a slice-of-life documentary called Takin’ Place, set in the same neighborhoods as Chi-Raq, and after 3+ years of filming and hanging out and talking to people, I can say for sure that the people I met were largely concentrated on the fun end of the prude-freak spectrum. Unlike in other segments of society, internet porn has not disrupted the minds and sex lives of South Siders. There’s a lot of actual, real-life sex going on, and as a lover of sex and debauchery, Chi-Raq’s raunchiness was easily one of my favourite parts of the movie.

What was harder for me — and a lot of other folks born and raised on the South Side of Chicago — to stomach were the fundamental assumptions that neighborhoods filled with our friends and families are analogous to a warzone. A large majority of Chicagoans — including a lot of African-American South Siders who one might expect to be fans of the black director — felt that a film with the title Chi-Raq simply furthers the stereotypes people have about their neighbourhoods as being horrible, violent places devoid of anything positive. Who does this guy who sits courtside at every Knicks game think he is coming here? And he’s going make money off this?

That’s not to say all Chicagoans care about Lee calling the movie Chi-Raq. After all, a person getting shot in Chicago is so common that it’s a news event when there aren’t murders. Everybody I filmed went to funerals on what I would definitely consider a regular basis. And the sheer senselessness of some of these shootings was ridiculous: don’t picture the guy catching his wife with his brother, who in a fit of rage and passion shoots them both. People shoot people they barely know over Instagram comments. “We cannot ignore this reality,” said Father Michael Pfleger, a real-life [white] catholic priest (portrayed in the film by John Cusack) with an all-black congregation on the South Side.

Garry McCarthy, former superintendent of the Chicago Police, recalled one incident of gun violence from July 2012 [circa 10:10]: “There was an incident where a 13-year-old was shot at about 1 o’clock in the morning. What was not reported was that that 13-year-old was in a gun battle in front of his house! What puts a gun in a 13-year-old’s hands at 1am on the streets of Chicago?”

“Welcome to Chi-Raq!” says Dolmedes (played by Samuel L. Jackson), the film’s quasi-narrator, at the beginning of the movie. “The land of pain, misery and strife!”

The film is, at its core, a call to action. It’s over the top — and at times straight weird — and this introduction by Sam Jackson is but one example of where someone mistakenly expecting a portrayal of daily life in Chicago gets something much more exaggerated and dramatic. I’ve found a lot of the criticism of the movie pertains to the idea of the film not being “accurate.” As a call to action, I’m not sure it needs to be.

I’m not a film critic, and I’m slightly embarrassed to say I haven’t seen many of Spike Lee’s movies. There are many educated assessments out there of how Chi-Raq compares to Lee’s notable filmography. And the extent to which Chi-Raq is a straight-up masterpiece — or even the extent to which it’s a successful interpretation of Aristophanes’ play — is best left to scholars who know what they’re talking about.

But unlike message-driven dramas like Boyz in the Hood, Spike Lee’s newest film is much more bad-ass and raunchy. And did Spike Lee just come with a nod to the ancient Greeks?

As a filmmaker from Chicago who was born and raised on the South Side — and someone who has actually seen the film (many who criticize it have refused to watch it) — I can say this: the film comments on a culture of violence and machismo and revenge that is, sadly, alive and well, and not just in Chicago. Lee’s message is simple: the cowboy culture of gun violence embraced by guys (and gals) is really, really stupid. It’s unnecessary, and it isn’t what being a real man is all about. On this point, the Knicks fan from Brooklyn is absolutely right.