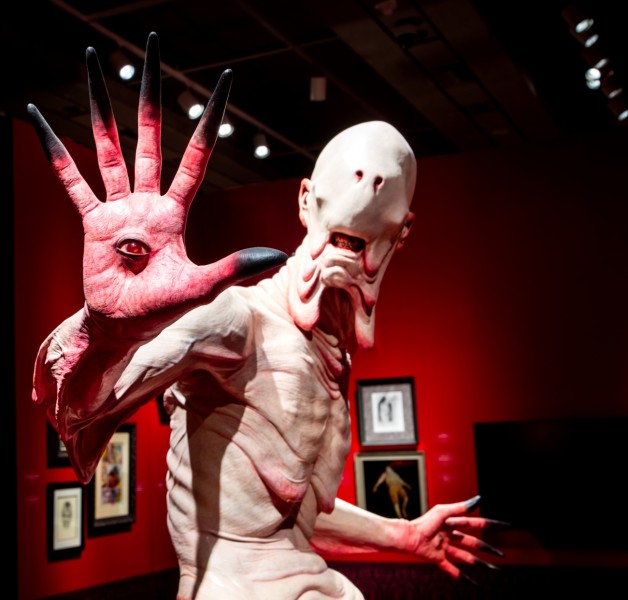 The Art Gallery of Ontario’s Guillermo del Toro: At Home with the Monsters allows us to step inside the director’s world

In June 2014, Jim Shedden, Manager of Publishing at the Art Gallery of Ontario, took a trip to Los Angeles to peruse Guillermo del Toro’s belongings. The filmmaker had opened up the doors to a place he calls Bleak House (named after the Charles Dickens novel), a cinematic man-cave stuffed to the brim with more than 10,000 books, artifacts from film and television, and an Edgar Allen Poe–inspired “Rain Room” that simulates the look, sound, feel of a perpetual thunderstorm. It was a place meant to house the director’s most treasured objects and inspirations.

“The story was that he wanted to hang one piece in their kitchen. When his wife said no, Guillermo said, ‘I'm going to get my own house,’” remembers Shedden. “He says his collection is his greatest work of art. There is a part of [his process] that’s about taking in the world, assembling things, and finding connections, but it’s the way he filters these influences that becomes just as powerful as his original creations.”

Three years later, many of these objects and images have taken up residence in the AGO in the exhibition Guillermo del Toro: At Home with Monsters, which is presented in partnership with the Los Angeles County Museum of Art and Minneapolis Institute of Art. (An accompanying film programme, Guillermo del Toro: Influences — which includes screenings of such eclectic selections as David Lean’s Great Expectations, Michael Mann’s Heat, and Federico Fellini’s Spirits of the Dead — is screening at TIFF Bell Lightbox through to December 13.) 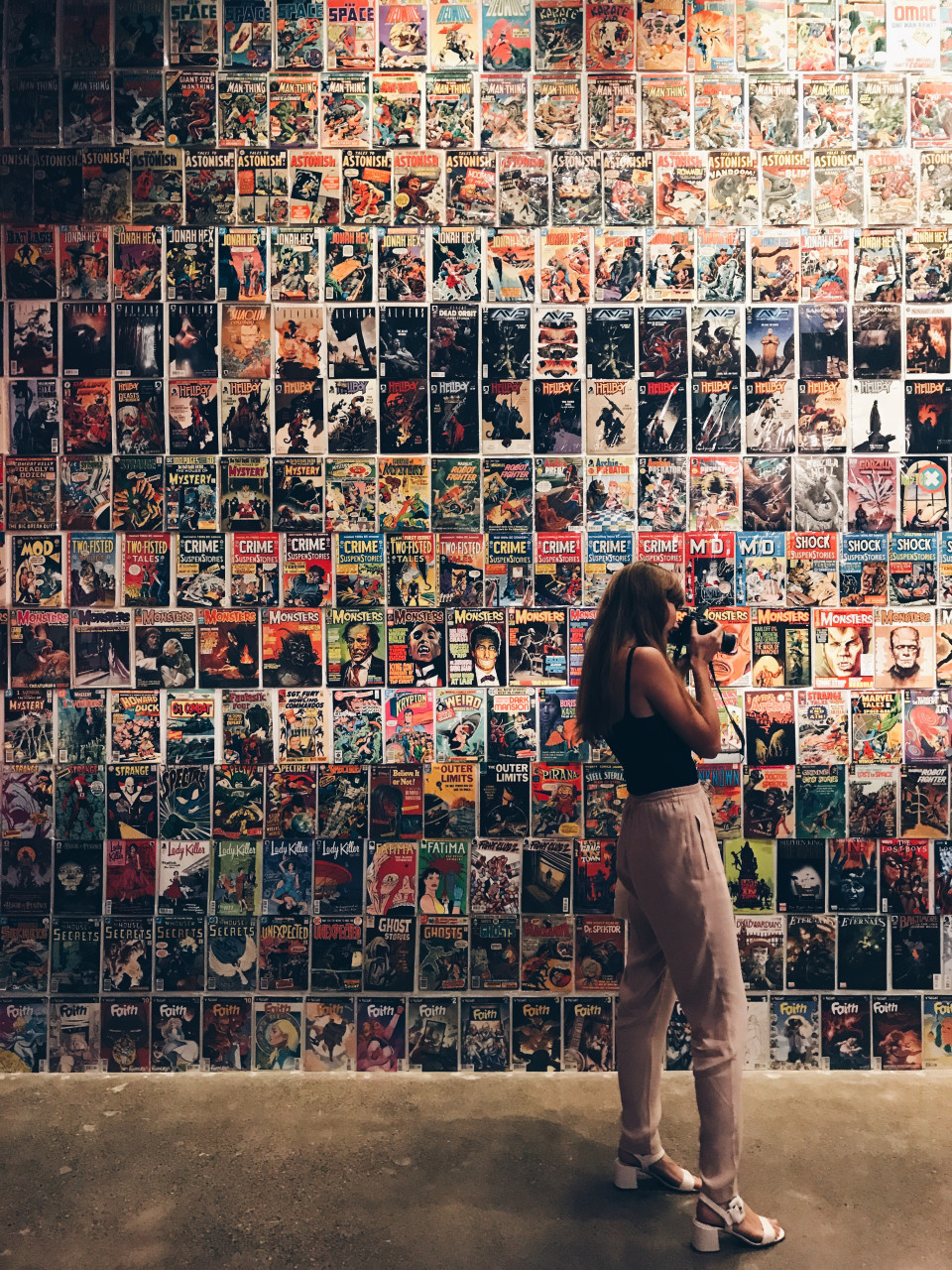 A wall dominated by Guillermo's favourite comics is a memorable part of the Art Gallery of Ontario exhibit.

The exhibition addresses major themes across del Toro’s body of work, with rooms devoted to “Childhood and Innocence,” “Death and Resurrection,” as well as “Movies, Comics, and Popular Culture.” Montages from del Toro’s films play on digital screens while a live pianist performs the score to Crimson Peak and Pan’s Labyrinth, and music from Beethoven, Brahms, and Erik Satie; life-size creatures from Hellboy II: The Golden Army and Pan’s Labyrinth mingle with over 100 different editions of Mary Shelley’s Frankenstein. There are portraits by Francisco Goya, medieval skulls from the AGO’s Thomson European Art Collection, prints from Disney’s Fantasia, and concept art by the legendary stop-motion animator Ray Harryhausen, of Jason and the Argonauts fame. Visitors can pore over del Toro’s digitized notebooks, examining his hand-drawn instructions on how to build a better mummy. One room devoted to “Outsiders” hosts a life-sized replica of the Elephant Man (as seen in David Lynch’s 1980 cult classic), as well as Winslow Leach’s mask from Brian De Palma’s Phantom of the Paradise.

But the keystone to the exhibition (and del Toro’s vision as a whole) is a certain green-skinned creature who will celebrate his 200th birthday next year. “Frankenstein is the most important monster for [del Toro], the most important book, the most important film,” says Shedden. “I think it’s because he’s drawn to how we create monsters in our own image — you know, like God did. Then we deny them because they’re too scary, too dangerous. You can see the relationship between the creator and the monster in all of his films.” A room devoted to the Monster concludes the show, with works ranging from a humongous silicone replica of the creature's head (designed and fabricated by frequent del Toro collaborator Mike Hill), a rare 1966 poem written by Margaret Atwood and illustrated by Charles Pachter, images from a 1983 Marvel comic adaptation by graphic novelist Bernie Wrightson, and haunting, mountainous landscapes by Eyvind Earle, a Disney concept artist who worked on Sleeping Beauty.

The AGO show is a departure from the exhibition’s previous iterations in Los Angeles and Minneapolis, thanks to del Toro’s Toronto roots. Shedden pulled from the filmmaker’s Toronto production offices and storage units to recover treasures from the locally shot films Crimson Peak and The Shape of Water, as well as showcasing work by some of del Toro’s favourite Toronto-based artists: graphic novelist Chester Brown and sculptor Evan Penny, whose piece Shedden describes as a “mix of LSD and Photoshop.”

Guillermo del Toro takes Criterion on a tour of the real-life Bleak House.

After spending two months installing the show, Shedden is left with only a few regrets. “I just think we could’ve pumped up the vampire content a little more,” he reflects. “With Cronos, Blade II, and The Strain, I realized just how much of an expert he is on the history of vampires. Of course, now he is in the process of creating one of the greatest vampire movies ever.” (Del Toro has hinted online he is working on a project titled Silva, which explores a world dominated by “Mexican wrestlers and vampire politicians.”)

“He also said he didn’t want anything in the show that wasn’t special, that if you could just go out and buy it at Walmart, it shouldn’t be in there. This meant leaving out The Muppets, who are very important to him. I should’ve found a way to put Jim Henson in there.”

So for the GDT obsessives out there, what single object in the exhibition is the key to truly understanding him? Let’s say, hypothetically, that a tragic fire erupts in Bleak House and Guillermo can only rush out to save one thing. What would he choose?

“He’s been asked this before,” says Shedden, “and he wouldn't save anything. For him, it's not about a single object but how all of these things come together in his mind. The point has to do with the power of collective human storytelling.”