Glorious Feelings: Gene Kelly and the Evolution of the Movie Musical 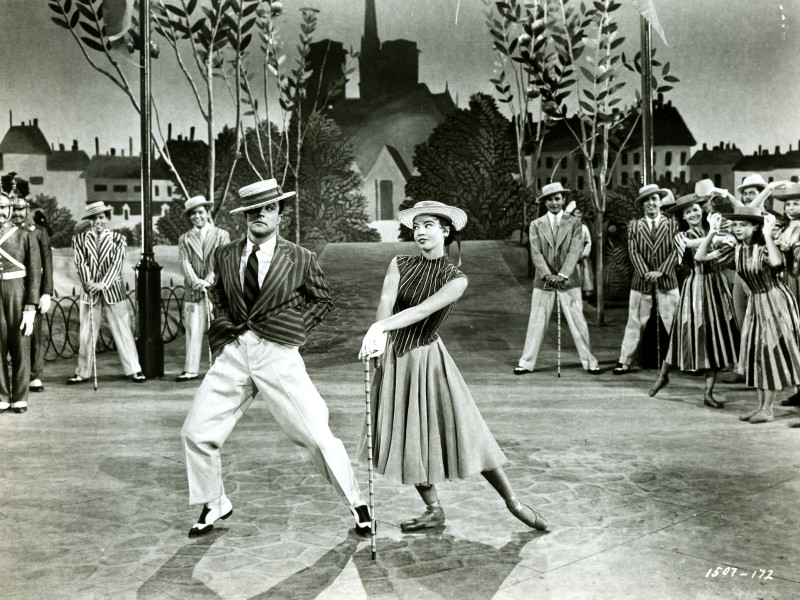 Arriving in Hollywood from Broadway in the 1940s, Gene Kelly seemed in many ways to be the opposite of the previous decade’s dance icon, Fred Astaire: t-shirt and trousers rather than top hat and tails, brashness and athleticism in place of elegance and grace, swaggering and wolfish rather than ardently romantic. As many have observed, where Astaire made dancing look effortless, Kelly made it look like what it was: bloody hard work. 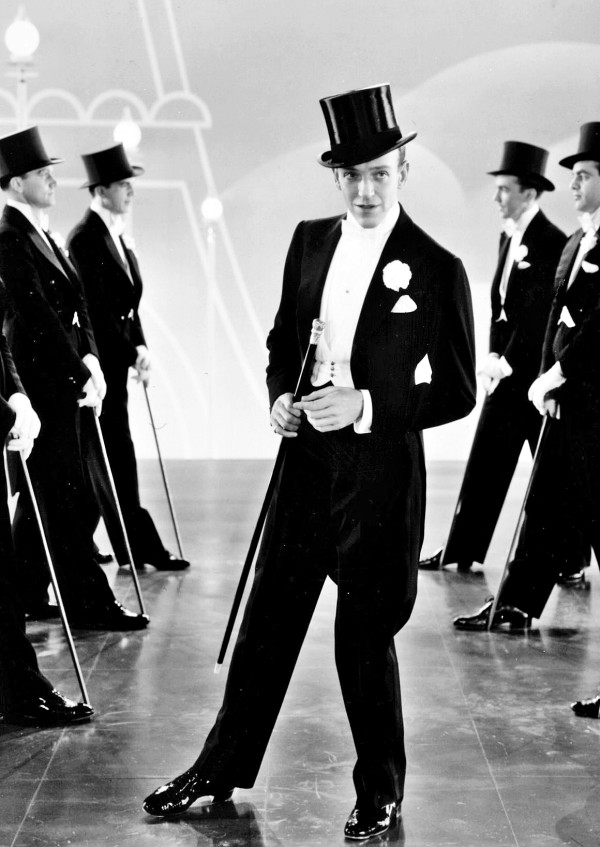 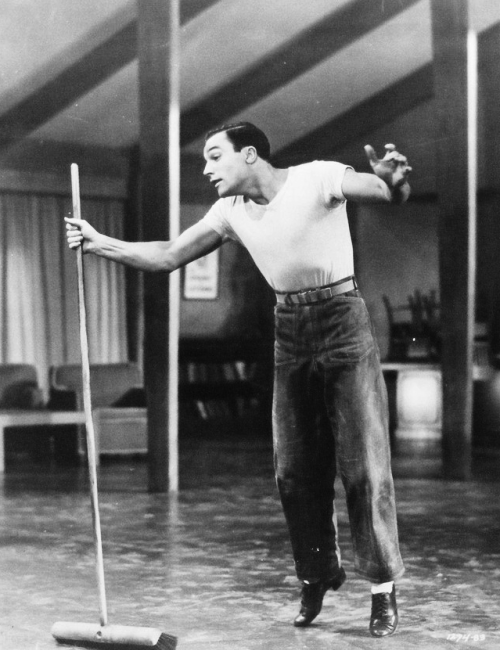 But beneath these surface differences, Kelly and Astaire had much in common — a kinship that was neatly illustrated in the matching outfits they wore in their delightful “Babbit and the Bromide” number in the 1946 revue Ziegfeld Follies. Both were choreographers as well as dancers, and were rigorous (and sometimes ruthless) taskmasters to both themselves and their co-stars in their pursuit of perfection. Both sought to expand the parameters of dance on film, Astaire with his insistence on framing the full figure of the dancer and cutting as little as possible, Kelly by attempting to integrate and enhance the dance with filmic effects such as lighting, special effects, and — as with his famous duet with Jerry the Mouse in Anchors Aweigh (1945) — animation. And while Kelly cultivated a blue-collar persona for his musical films, he was in truth only magnifying a crucial aspect of the Astaire character. 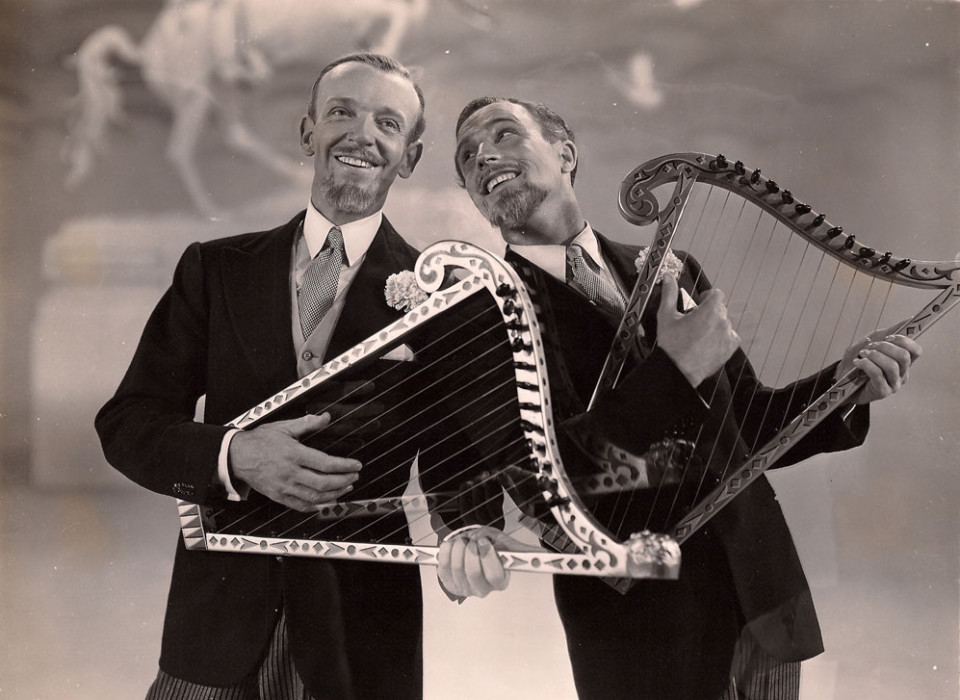 Although he moved through high society, the Astaire of the ’30s was always depicted as a regular Joe who delighted in puncturing pretension and deflating stuffiness. In Top Hat (1935), Astaire unleashes a swift barrage of taps to shake up the aristocratic club members who have been constantly shushing him; in Shall We Dance (1937), his revered ballet star “Petrov” is really plain old Pete Peters from Philadelphia, who happily abandons his pirouettes in favour of a duet on roller skates; and in Follow the Fleet (1936) he’s a simple swabbie with a dance-hall background, anticipating the fleet-footed sailors that Kelly would play in such films as Anchors Aweigh and his co-directorial debut On the Town (1949), which marked a milestone (or a myth) as the first Hollywood musical to be shot on location in New York City. 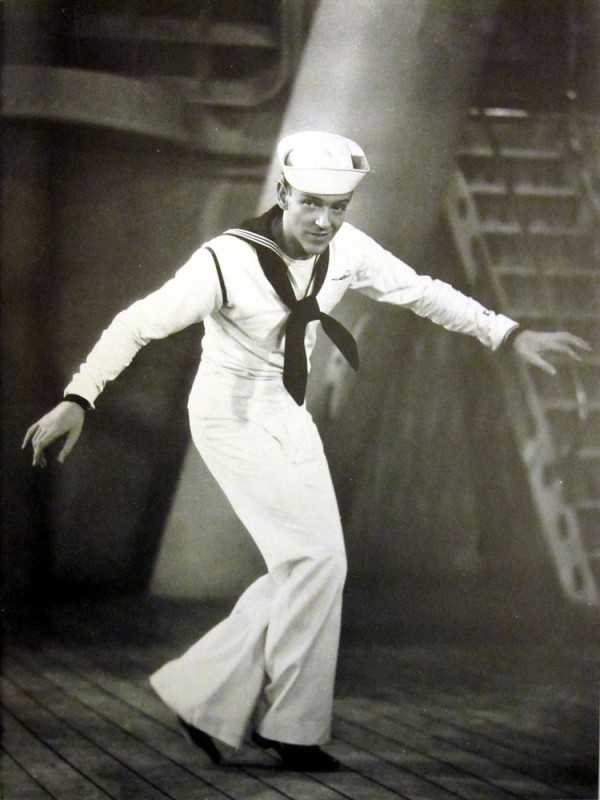 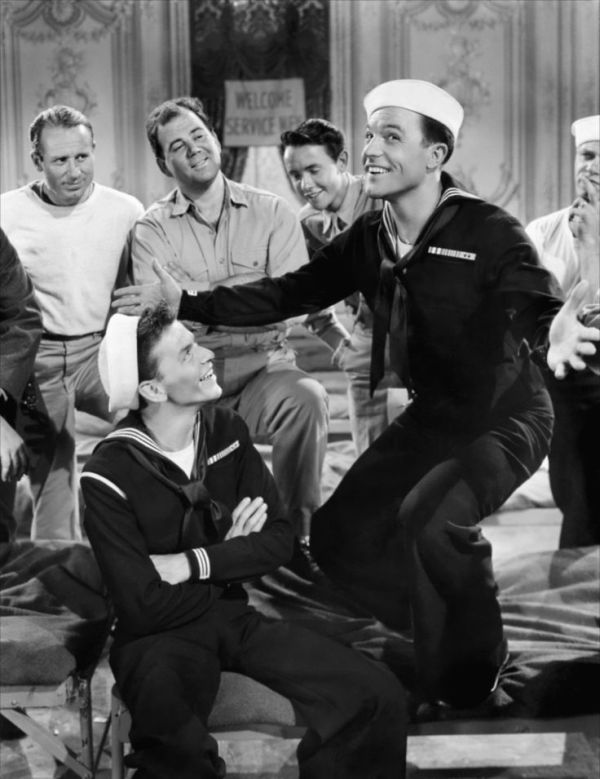 What truly differentiated Kelly from Astaire was the nature of his artistic ambitions for the movie musical. Beginning with the “Pirate Ballet” in Vincente Minnelli’s The Pirate (1948), Kelly made the fantasy “dream ballet” a staple of his films. In On the Town, Kelly recaps the events of the entire film in “A Day in New York”; in the spectacular, 17-minute “American in Paris” ballet from the Oscar-winning film, he pursues his lady love Leslie Caron through a fantastical City of Lights inspired by the paintings of the Impressionists; in Singin’ in the Rain (1952) he interrupts the jazzy “Broadway Melody” sequence for a fantasy ballet interlude with a white-garbed Cyd Charisse. In 1956, Kelly reached the height of his ambition with Invitation to the Dance, a plotless anthology of self-contained ballet performances which sank at the box office, despite a sop to the mainstream with an impressive reprise of the live-action/animation technique from Anchors Aweigh featuring Kelly as a sailor (natch) in a Hanna Barbera-assisted dance sequence. 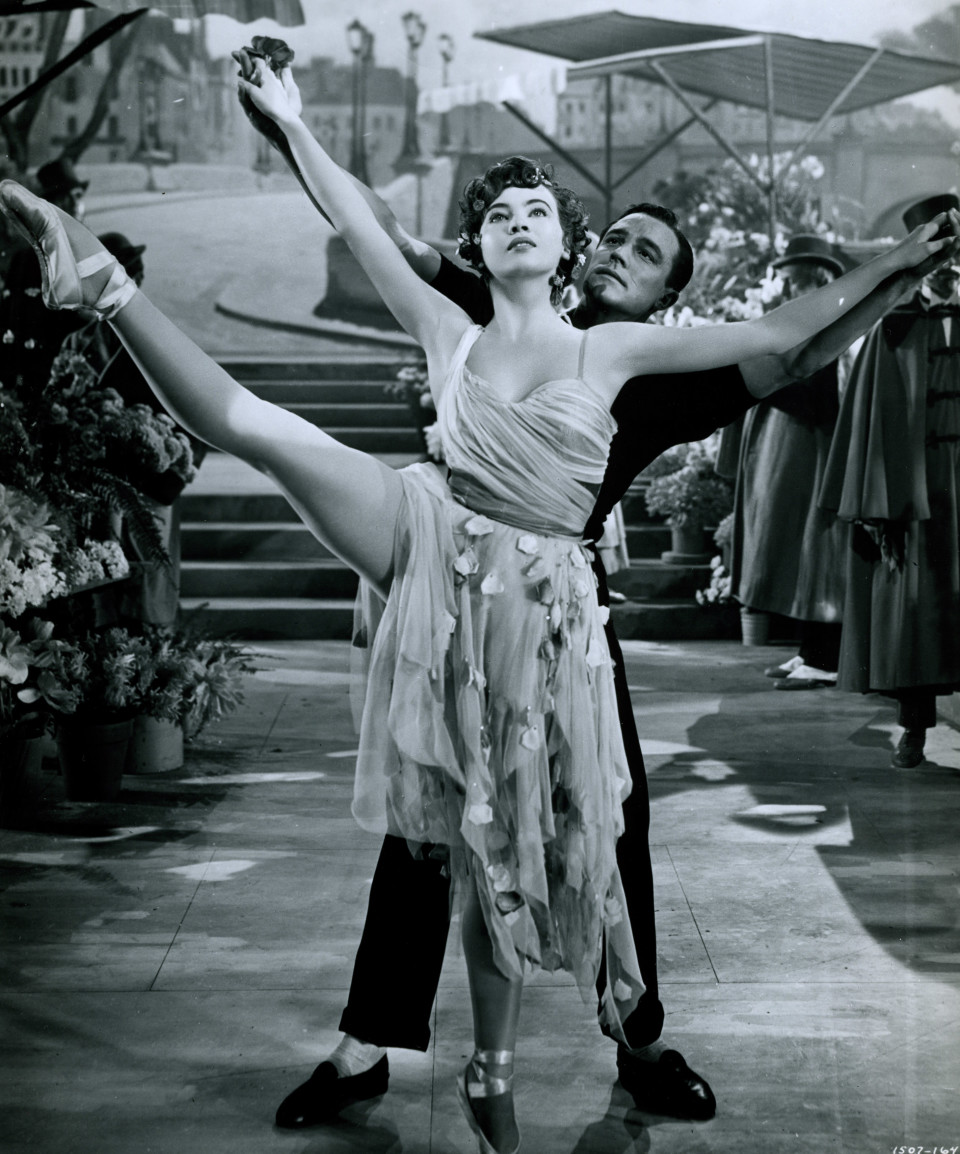 If Kelly’s ambitions could sometimes shade over into pretension — one wonders if his collaborator Minnelli was poking some good-natured fun at him with the disastrous, special effects-laden rehearsal scene of the “You and the Night and the Music” number in the Astaire-starring The Band Wagon (1953) — they were offset by his equal dedication to shamelessly hammy showmanship and knockabout, crowd-pleasing entertainment. The underseen and underappreciated Les Girls (1957) — a marvellous musical riff on Rashomon (!) that capped Kelly’s legendary run at MGM — features some of the star’s finest efforts in this vein, including the title number, a delightfully silly little mutual-admiration duet with the divine Kay Kendall (“You’re Just Too Too”), and “Why Am I So Gone About That Gal?,” a parody of Marlon Brando’s The Wild One with Kelly clad in full-on Scorpio Rising get-up. 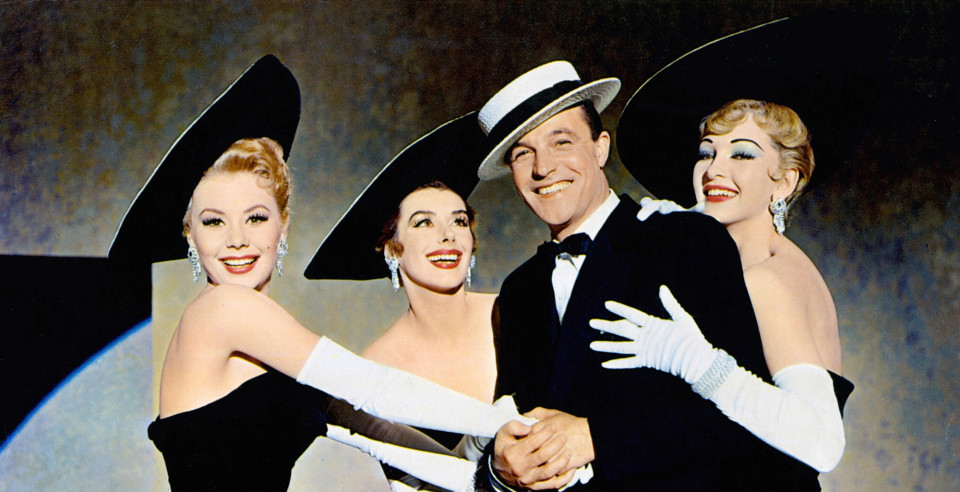 Les Girls was the last of Kelly’s classic Hollywood musicals, after which he turned increasingly to drama (including a turn in Stanley Kramer’s Oscar-baiting Inherit the Wind) and directing (including the mega-budgeted, Streisand-starring adaptation of the Broadway hit Hello, Dolly!). Excluding his pleasant reunion with Astaire in the anthology That’s Entertainment! Part II (1976) and his unfortunate appearance in the Olivia Newton-John megaton bomb Xanadu — where his character bears the same name as his tap-dancing nightclub owner in 1944’s Cover Girl and does a magnificently hideous, disco-scored replay of the incredible roller-skate number in It’s Always Fair Weather (1955) — Kelly appeared in only one more musical, Jacques Demy’s The Young Girls of Rochefort (1967). Fittingly, Kelly devotee Demy paired his idol with some shore-leaving soft-shoers for an exuberant open-air number on the streets of the titular town — not only a nod to the naval proclivities of so many past Kelly characters, but also a harking back to On the Town in the way that it transforms an ordinary, real-life setting into a cinematic dream world. 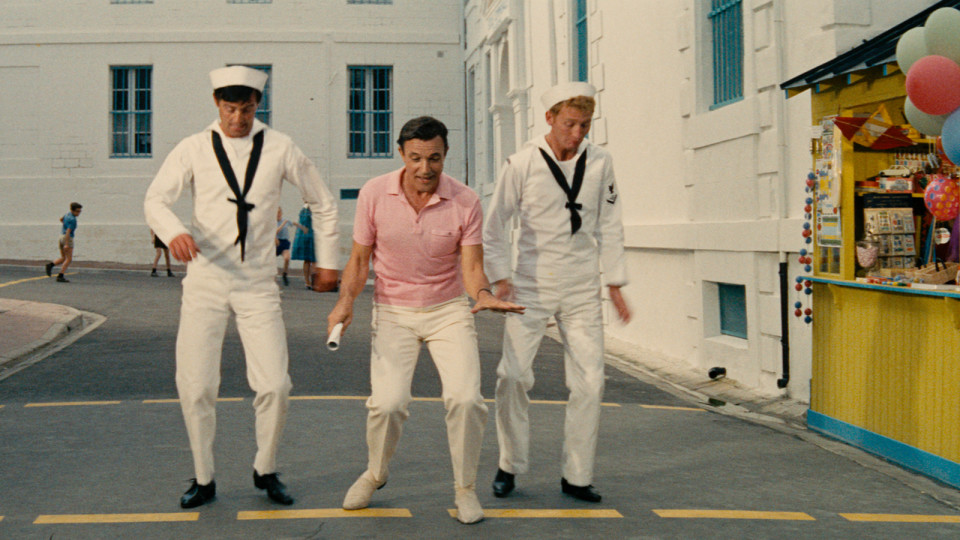 Kelly and sailors in The Young Girls of Rochefort

Singin' in the Rain

An American in Paris