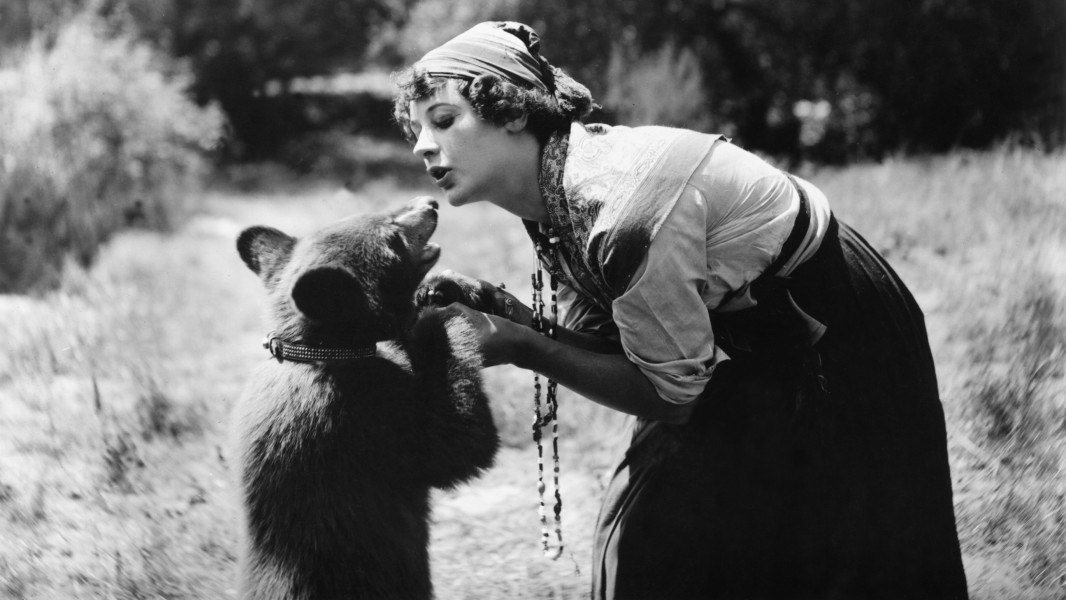 To mark International Women’s Day and celebrate the tremendous success of TIFF’s initiative Share Her Journey — a five-year commitment to increasing opportunities for women in the film industry, which as of January 2019 has raised a remarkable $2.2 million to directly support new programming aimed at tackling gender parity — here's another look at programmer Alicia Fletcher's invaluable series of essays about the trailblazing women of silent cinema, starting with Canadian film pioneer Nell Shipman. Find more links below to brush up on legends Louise Brooks, Lillian Gish, and Dorothy Arzner.

If the Canadian-born Mary Pickford was “America’s Sweetheart,” then Nell Shipman might be anointed “Canada’s Adventuress” — and, whimsical handles aside, she was undoubtedly this country’s foremost early film pioneer. Her 1919 feature Back to God’s Country (which she wrote and produced as well as starred in) was the most profitable Canadian silent film ever produced; she was one of a very small number of women in any country to run her own production company during the silent era; and she was also a talented wildlife trainer and an animal rights crusader who advocated for the humane treatment of animals in the film industry (far from a common cause at the time). Ahead of the curve(s) in all respects, Shipman is further credited with another filmic milestone: the first onscreen nude scene from an established star.

Born Helen Foster-Barham to English immigrant parents in Victoria, B.C., Shipman travelled the North American vaudeville and theatre circuits with her mother from the age of 13. At 18, she married Canadian theatre impresario Ernest Shipman, and by 22 she was a noted actor, screenwriter, director, and producer. In the first decades of the film industry, employment opportunities for young women in screenwriting (or, occasionally, editing) were surprisingly prevalent; directing, however, was still relatively rare, apart from such notable exceptions as Shipman’s contemporary Lois Weber (the most prolific and high-profile female director and producer in the US) and France’s prodigious Alice Guy-Blaché, who began directing as early as 1896 and produced over 200 films in the ensuing 25 years.

After their marriage the Shipmans moved to Hollywood, where Nell appeared in films released by the Vitagraph and Selig companies and sold her original stories to Universal. Her feature-film debut, the 1916 God’s Country and the Woman, established the motifs that would recur throughout her filmography, including wilderness settings, daring stunts, on-location shooting, and source material derived from the work of author James Oliver Curwood. 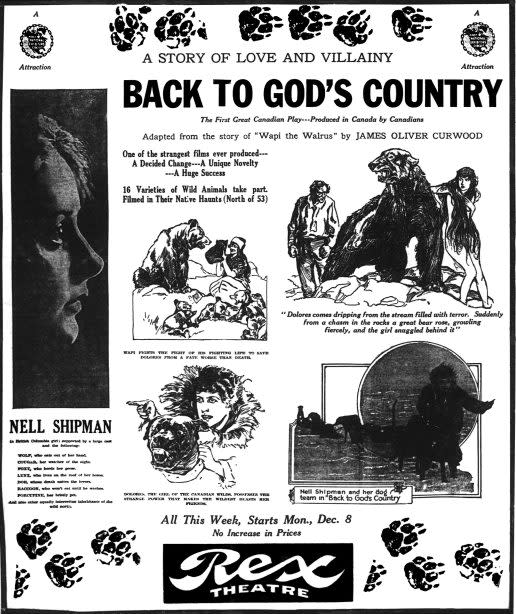 In 1919, Shipman and her husband rejected a lucrative seven-year contract with producer Samuel Goldwyn and decided to form their own production company. Filmed on locations 90 km. north of Edmonton, with additional shooting in Calgary, northern California and Hollywood, the duo’s first project Back to God’s Country (a then-rare US-Canada co-production) was based on the Curwood short story “Wapi the Walrus,” which had appeared in Good Housekeeping Magazine. Taking over the hero role from the Great Dane who was the star of the original story (and was not, in fact, a walrus, as some reviewers claimed), Shipman plays backwoods nature girl Dolores LeBeau, whose daring rescue of an unwary, city-bred “fellow in distress” (love interest Wheeler Oakland) sets off a grandly melodramatic plot that ends with a pursuit across the Arctic ice. 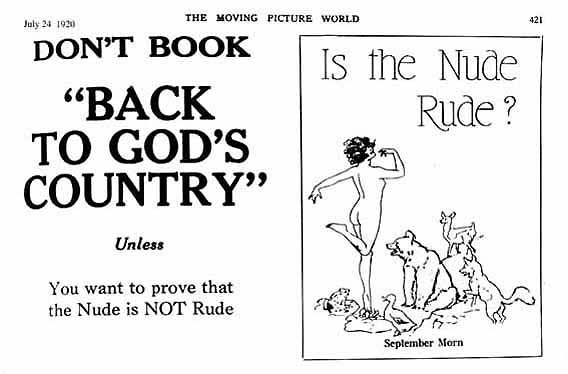 The talented and self-assured Shipman knew how to capitalize on her assets, and — doubtless looking to guarantee her investment on this, her first film as producer — she made her body into one of the film’s chief marketing hooks. Female nudity had certainly featured in films prior to Back to God’s Country, in both early-cinema erotica and even in some studio productions. But never before had so established a star as Shipman disrobed for the camera: the brief nudity in Lois Weber’s 1915 film Hypocrites was performed by an uncredited actress (Margaret Edwards), and while Australian swimming starlet Annette Kellerman appeared fully nude in the 1916 Fox production A Daughter of the Gods, her long locks covered much of her body. However, Shipman’s nude cavorting in a mountain stream in BGC is remarkable not only for the fame of the performer, but for how it actually reinforces the star’s screen persona as an independent, resourceful, and strong-willed woman in touch with nature.

The heroine’s closest companions in Back to God’s Country are the creatures inhabiting the Canadian wilderness: skunks, raccoons, goats, and bears keep Dolores company, along with her faithful canine friend and protector Wapi (portrayed by a pup named Tresore). Working with animals on film was (and is still) a risky, complicated endeavour that requires immense skill and planning. Shipman had a knack for eliciting convincing performances from the menagerie she herself helped to train. Beyond being a lover of animals, Shipman was their advocate: she trained them, cared for them, valued them as her production company’s greatest assets, and vocally decried their habitual mistreatment on Hollywood sets. 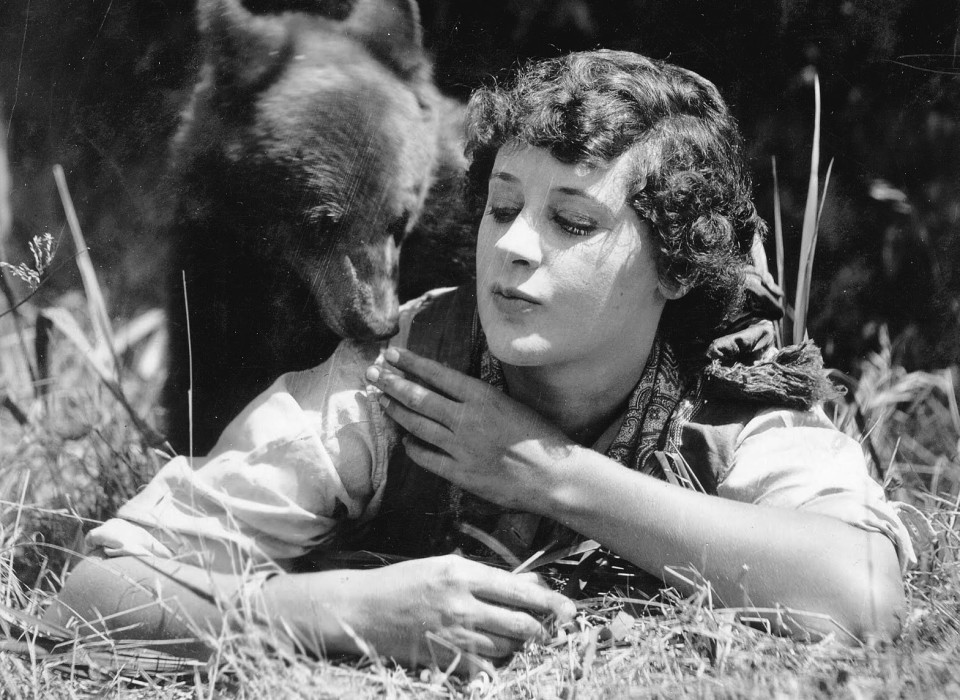 Upon completion of Back to God’s Country, Shipman divorced her husband and formed a new production company, Nell Shipman Productions, with her lover Bert Van Tuyle. However, by the early 1920s, the film business had become dominated by a handful of major studios that operated as a virtual monopoly, making it nearly impossible for independent producers such as Shipman to compete in the marketplace. Shipman’s next project, 1923’s The Grub-Stake, was left in limbo when its distributor went bankrupt and litigation prevented its release; revived nearly a century later, it is now considered one of Shipman’s key films. 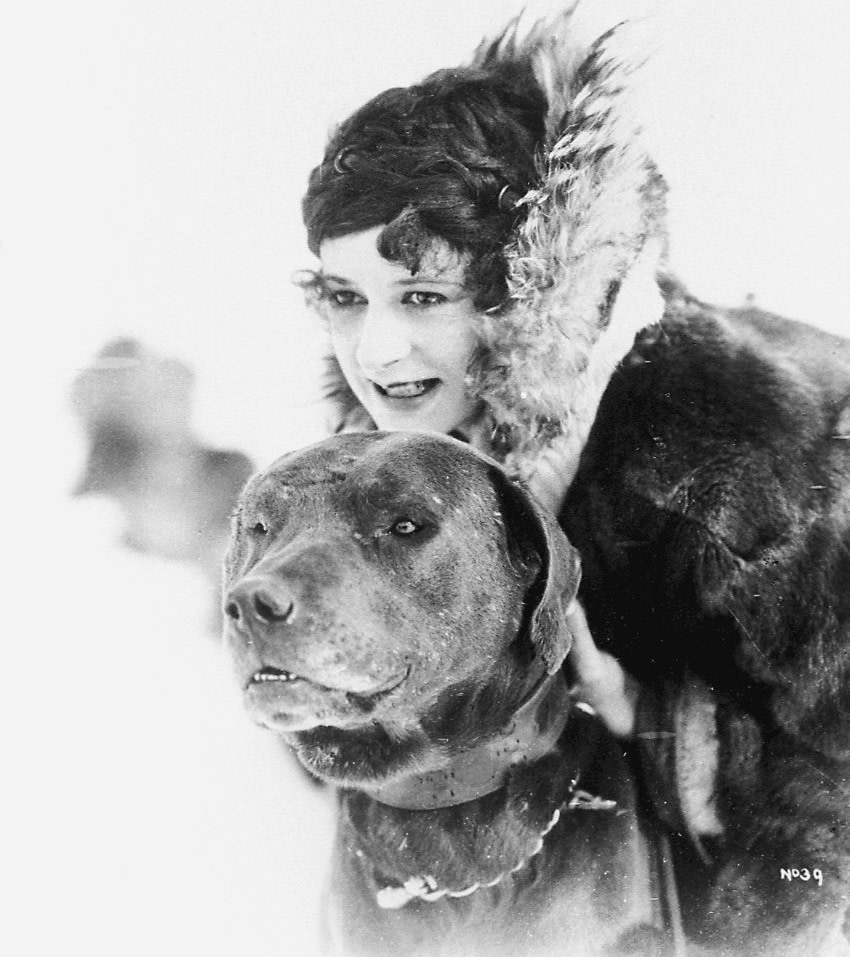 Shipman’s production company went bankrupt in 1925, forcing the star to divest herself of the menagerie of animals that she had acquired from a defunct California zoo and given a new home at her Idaho studio in Priest Lake; auctioned off by court order, the animals wound up at the San Diego Zoo. A year prior to this, Shipman’s beloved canine star Tresore was mysteriously poisoned, along with other of her animals; Shipman suspected her landlord of the deed, as she owed him substantial sums of money.

With her production company dissolved and her precious animals taken from her, Shipman spent her subsequent years in the Californian desert writing screenplays, novels, and short stories — one of which became the basis of the 1935 aerial melodrama Wings in the Dark, starring Cary Grant and Myrna Loy. 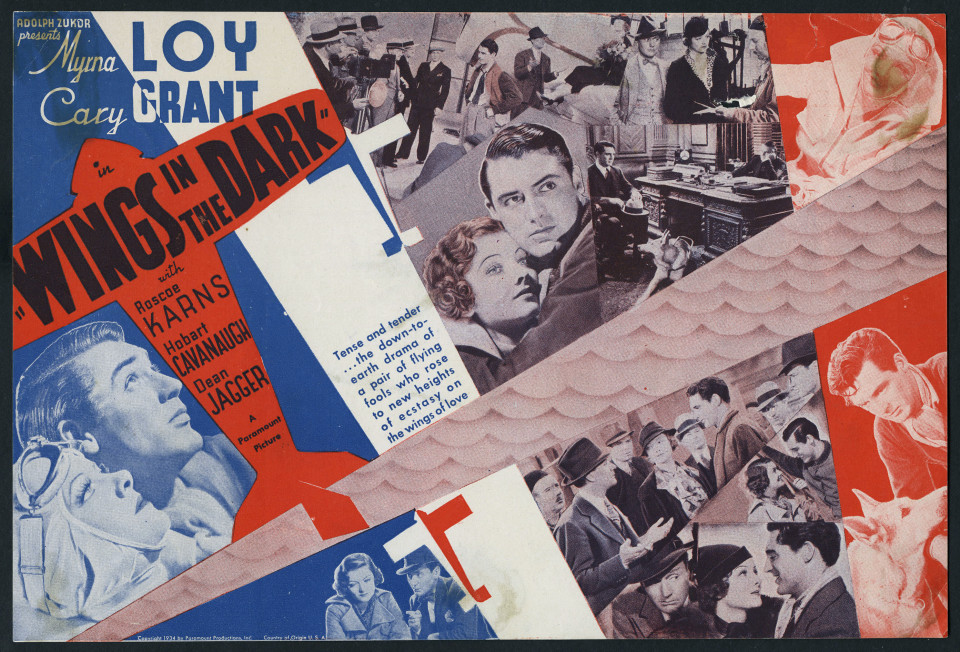 Shipman’s autobiography, The Silent Screen and My Talking Heart, was published in 1987, 17 years after her death. In it, Shipman exhibits the same talents for gripping storytelling — and, likely, some cunning narrative invention — as she did in her films, proving her to truly be a heroine of her own making.