The TIFF Cinematheque retrospective Funny Girl: The Films of Elaine May runs from June 8 to June 30.

“Elaine was formidable…. one of the most intelligent, beautiful and witty women I had ever met. I hoped I would never see her again.” —Richard Burton

As Elaine May left the stage at the Writers Guild of America awards ceremony in 2016, where she had just received a lifetime achievement honour, the evening’s host, comedian Patton Oswalt, commanded the audience to “Avert your gaze as she passes by! That’s Elaine May, goddammit!” He then went on to remind the audience that, while feuding with Paramount Pictures over her film Mikey and Nicky, “She stole the print from the studio, hid it in her garage like a punk-fucking-rocker, and stared the studio down to put out the version she wanted.”

For an artist whose career has consistently ricocheted between extreme public exposure — as a celebrated comedy writer and performer with her partner Mike Nichols, and then as one of the only female writer-directors in Hollywood — and relative invisibility (as both a credited screenwriter and an anonymous, go-to script doctor for some of the biggest hits of the ’70s, ’80s, and ’90s), this was a timely reminder that May was as much an uncompromising renegade as her Mikey and Nicky star John Cassavetes. On all the four films she directed — A New Leaf, The Heartbreak Kid, Mikey and Nicky, and Ishtar — May proved that she had more than enough chutzpah to break the rules and take on the studio suits in order to realize her vision. (And as per Richard Burton’s testimonial above, she could make even supposedly strong men quake in their boots, much to their dismay.)

For May, who wed at 16 and gave birth to her daughter, future actress Jeannie Berlin, a year later, comedy came from lived experience. While she admitted to Jonathan Rosenbaum in a 2010 conversation that her oft-cited origin story — which had her growing up in the Yiddish theatre and performing in her parents’ comedy troupe from the age of three — is not “strictly accurate,” there is no doubt that her comic persona was partially shaped by the tradition of Jewish vaudeville, exemplified by such great performers as Sophie Tucker and Fanny Brice.

In her work with the Chicago-based improv troupe the Compass Players, and then as a spectacularly successful comedy duo with fellow Compass alum Nichols, May seamlessly blended her Jewish comic roots with beatnik cool. Urbane, modern, and hip, May inspired future “funny girls” such as Joan Rivers, Lily Tomlin, and Gilda Radner with her dry wit and satirical critiques of gender, class, and race. 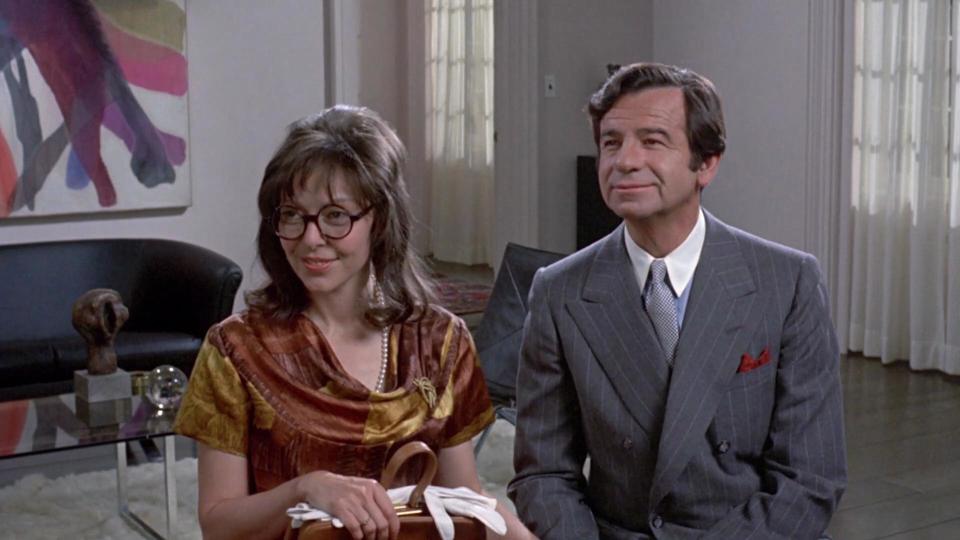 May and Walter Matthau in A New Leaf

Following the break-up of her partnership with Nichols in 1961, May turned to playwriting, appeared in the big-screen adaptations of the hit Broadway comedies Enter Laughing and Luv (the latter of which featured her future “Mikey,” Peter Falk), and co-starred with Nichols in a short-film adaptation of their famous sketch “Bach to Bach.” In 1971, she wrote, directed and starred alongside Walter Matthau (who was cast in place of her own choice, Christopher Plummer) in the black comedy A New Leaf, where she soon demonstrated her perfectionism and refusal to kowtow to the money men: going over schedule and over budget, May turned in a three-hour version of the film, and then attempted to sue Paramount when the studio chopped it down to 102 minutes. 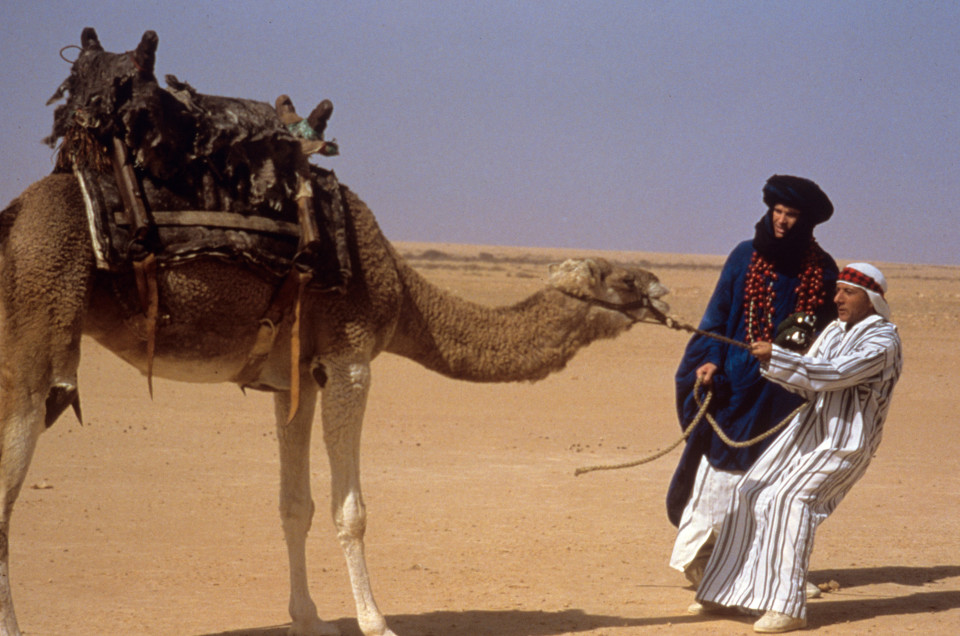 Warren Beatty and Dustin Hoffman (and camel) in Ishtar

May’s subsequent, even more dramatic showdown with the studio over Mikey and Nicky effectively killed off her directing career for the rest of the decade, and when she did return behind the camera — thanks to the influence of Warren Beatty, who was grateful to May for her screenwriting work on his smash hit Heaven Can Wait and Oscar-nominated passion project Reds — the nail was put in the coffin seemingly for good. A notoriously trouble-ridden production that went astronomically over budget, the Sahara-set, Reagan-baiting comedy-adventure Ishtar was one of the biggest critical and box-office flops of all time — thanks not a little to several pre-release stories about the film’s behind-the-scenes troubles, which May (in an onstage 2006 conversation with Nichols at New York’s Walter Reade Theater) attributed to studio head David Puttnam, who was engaged in a bitter feud with stars Beatty and Dustin Hoffman. 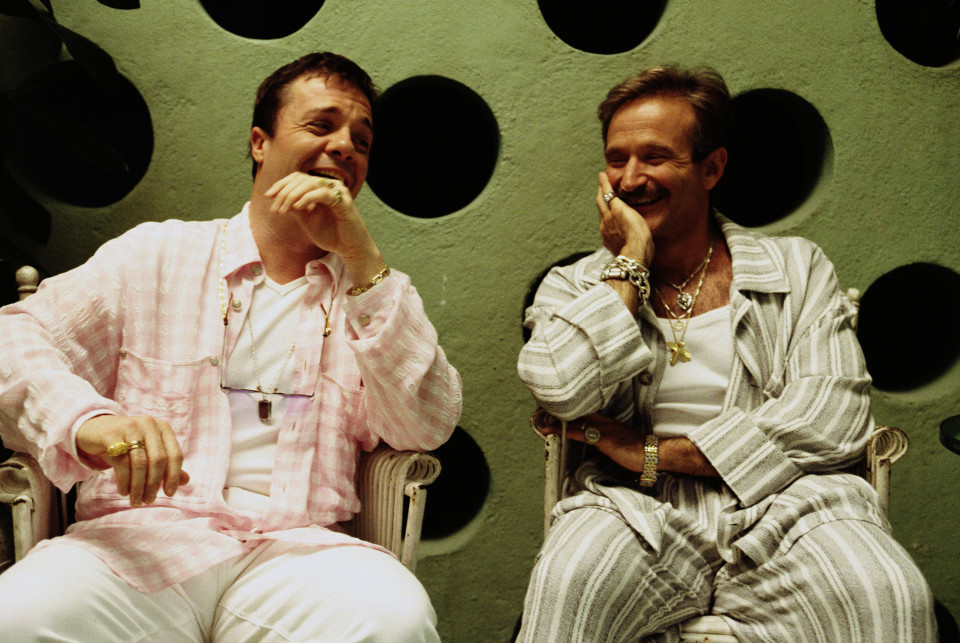 Nathan Lane and Robin Williams in The Birdcage

In the aftermath of Ishtar, May turned once again to writing, reuniting with Nichols for the hit comedy The Birdcage and the Oscar-nominated Primary Colors. The recent resurgence of interest in May’s directing career has revealed a filmmaker with a remarkably coherent and sometimes daringly dark comic vision, one who has skewered such shibboleths as the sanctity (and sanctimony) of marriage (A New Leaf, The Heartbreak Kid), the delicacy of the male ego (Mikey and Nicky), and American meddling in the Middle East (Ishtar). More than a funny girl, May is now rightly regarded as one of the great comic artists of our time — and perhaps we should just amend that to “artist,” period.

A New Leaf preceded by Bach to Bach