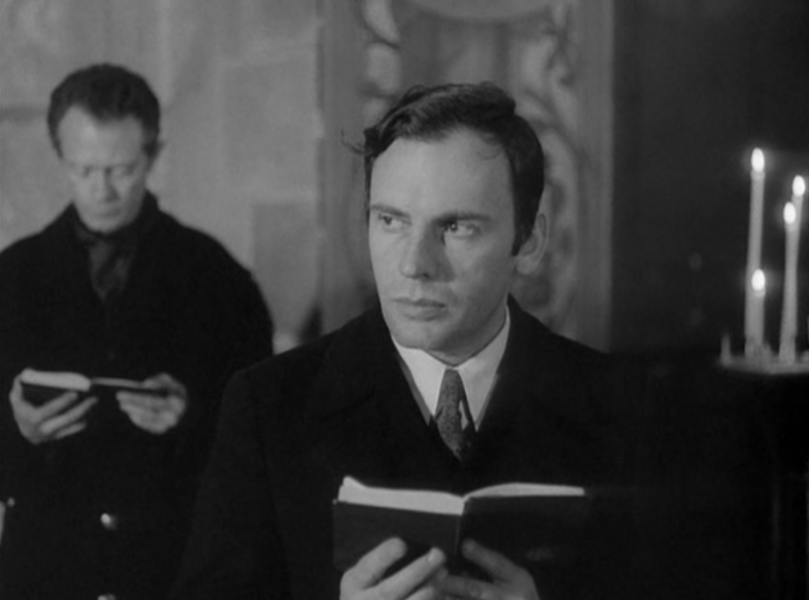 The hidden influence of Hitchcock on the French New Wave auteur

“All my characters are a bit obsessed with logic. They have a system and principles, and they build up a world that can be explained by this system... The conclusion of the film demolishes their system and their illusions collapse.”

Get your Cahiers' critic fix all summer at TIFF Bell Lightbox by watching retrospectives of Éric Rohmer, François Truffaut and Alfred Hitchcock, as part of our summer Cinematheque programming.

Éric Rohmer was one of the Hitchcockohawksians. That term of endearment, coined by Cahiers du Cinema editor Andre Bazin to describe critics at his famous French film magazine — Rohmer, Jean-Luc Godard, Francois Truffaut and Claude Chabrol among them — signified their shared belief in certain directors, even populists like Alfred Hitchcock and Howard Hawks, as being worthy of the status of auteur. This advocacy, however, went beyond the critics’ passion to shape a vibrant discourse and film culture in France. As the Cahiers critics became directors in their own right, their acclaimed idols influenced their own creative visions.

Rohmer, whose real name was Maurice Schérer, stood apart from the other Cahiers critics, mostly due to his older age and senior status at Cahiers, where he took over as editor-in-chief in 1957 after Bazin fell ill. Bazin’s other nickname for the Cahiers crew, “Young Turks,” didn’t apply as neatly to the filmmaker — Rohmer was nearing 40 when he released his first feature film, The Sign of Leo. Aside from some filmmaking experimentation in the 1950s, Rohmer focused on his criticism at that time and played a formative role at the magazine. By 1963, his leadership had fallen under scrutiny by the Young Turks and he was dismissed. While Leo wasn’t the overnight success of Truffaut’s 400 Blows or Godard’s Breathless, Rohmer persevered as a filmmaker — a lifetime of failure had taught him exactly how to do that, and he’d always been something of a late bloomer. 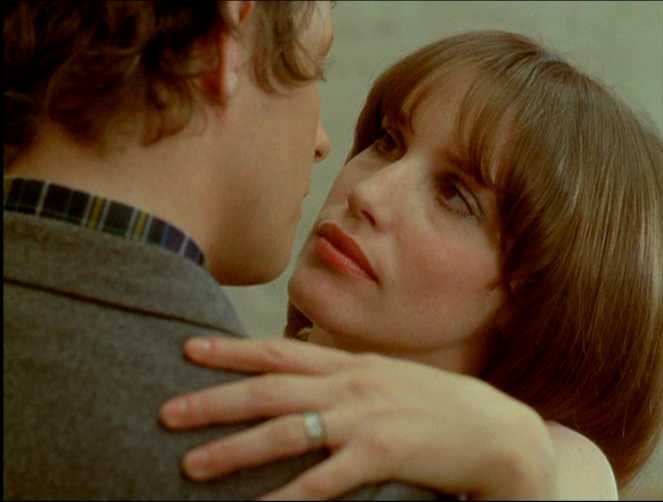 Failing to become an academic like his brilliant brother René, Rohmer nonetheless remained a curious learner and was extremely knowledgeable on fine arts, literature and music, turning his sights on cinema much later in life. Starting with his "Six Moral Tales" series (from 1963 to 1972, the films included such works as Love In The Afternoon, Suzanne’s Career and The Collector), Rohmer branded a unique type of cinema all his own, creating variations on the same themes, repeating story structures and plot devices. (Often, his plot centers on a man deciding whether or not to cheat on his romantic partner when he is compelled by another woman.) The strategy may seem a little calculated, but many of these original works were based on short stories he’d spent years writing and workshopping. At any rate, Rohmer created an identity and a “brand” for a film that he could “sell” to producers, critics and audiences alike, which allowed him to keep making movies. From whom did Rohmer learn such strategies? None other than Hitchcock.

In many respects, the films of Hitchcock and Rohmer have little in common. Hitchcock developed a new visual grammar and worked within — sometimes even transcending — the horror and suspense genre. Rohmer contained a quiet cinema, in his own words, a “cinema of thoughts, rather than actions.” Unlike Hitchcock, the French director didn’t much operate within genre parameters (outside of outliers like his second-last film Triple Agent, which drew obvious comparisons). Unlike his New Wave contemporaries, Rohmer didn’t experiment with the tropes of his favourite American directors.

In fact, Rohmer underplayed the importance of Hitchcock in his own work, claiming any such influence to be subconscious. Yet, the two are undeniably connected. The association may not be as obvious or personal as the one between Hitchcock and Truffaut, but that’s because it’s never been as well documented. Before Truffaut published his book of interviews with Hitchcock, Rohmer co-authored Hitchcock: The First Forty-four Films with Chabrol. Instead of interviewing Hitchcock, Rohmer analyzed and advocated the director from afar. And while it’s mostly Truffaut’s book we still talk about today — it’s one of the best film-director books ever published — Rohmer and Chabrol’s efforts were nonetheless groundbreaking for their time, constituting the first long-form study of a director that no one took seriously in the 1950s.

The rhetorical flourish and staunch tone in defending their unfashionable opinion was emblematic of the polemical discourse Rohmer introduced at Cahiers and which greatly influenced the study of auteurism. While the Hitchcockohawksians were considered contrarians, they were clearly ahead of their time. The sheer audacity of Rohmer and Chabrol’s book paved the path for future auteurist study and Truffaut’s own book. It made Hitchcock canon.

As a critic, Rohmer’s advocacy of the British director shouldn’t be undervalued, but it’s interesting to see how his appreciation of Hitchcock helped to shape his own films. Both men were raised Catholic, both were gifted with left-brain intelligence (Hitchcock studied to be an engineer, Rohmer excelled at mathematics in his youth). Rohmer’s fascination with morality (stemming partly from religious ideals) and systems of logic can be found in his analyses of Hitchcock and his own films. These fascinations are perhaps most explicit in My Night at Maud’s, in which characters argue for and against romantic entanglements using Pascalian logic, but elsewhere in Rohmer’s work many characters deal with problems of morality through logical deduction. In reviewing Rebecca, Rohmer once wrote of Hitchcock: “The two poles of his future work are clear. One is fascination, moral captation... The other pole is its opposite: knowledge — or more exactly, re-knowledge—of self, unity of being, acceptance, confession, absolute communion.” 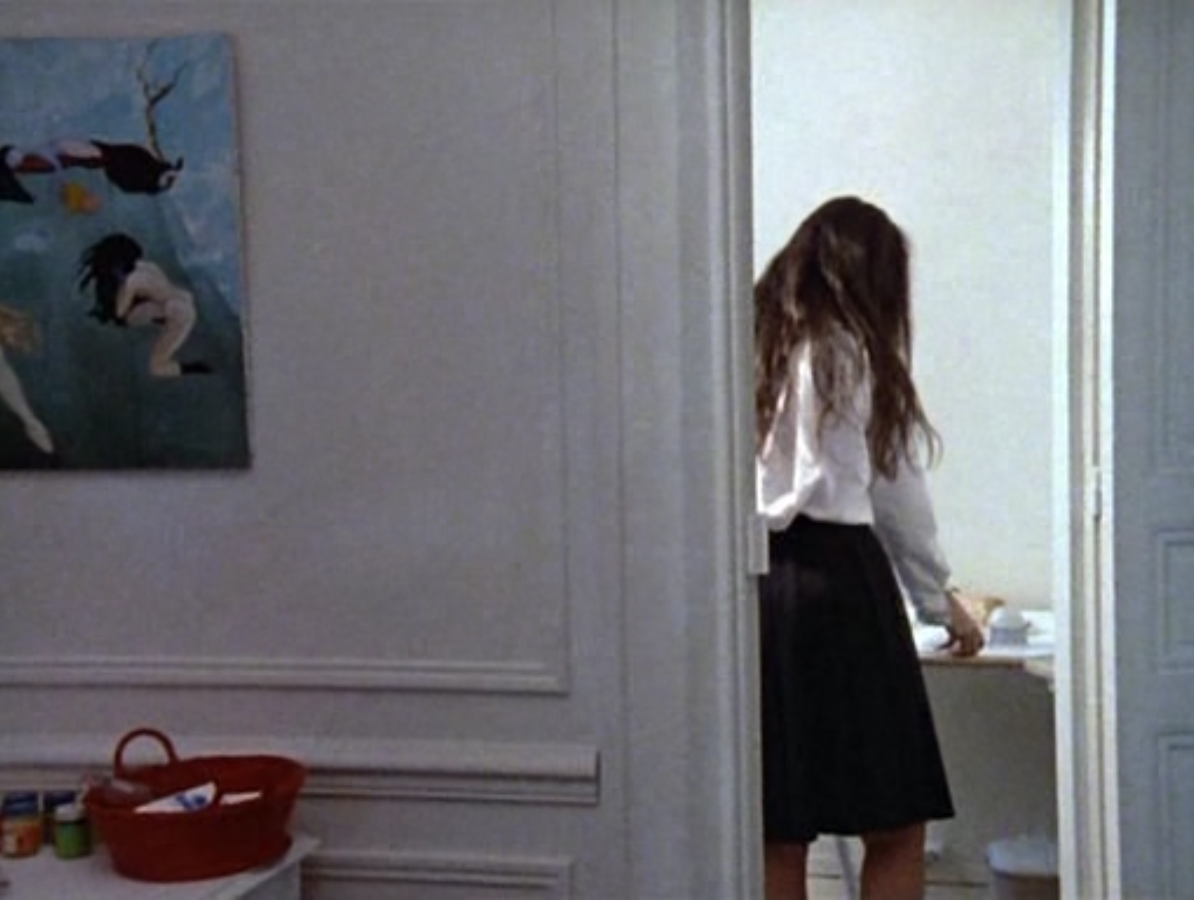 Rohmer’s characters are weighed down by problems tied to guilt and free will, and they’re unwittingly limited by their perception and access to knowledge. While Hitchcock applied similar games between characters and the manipulation of information, or lack of it, to suspenseful plots featuring high stakes —Jimmy Stewart’s grief after Madeline’s staged death in Vertigo, or the perplexing plot of North by Northwest in which Cary Grant is framed, to list only two of countless examples — Rohmer applied a similar device to characters in extremely low-stakes situations. Characters navigate the smallest of decisions based on feelings, common logic and circumstance. Take for instance, Rohmer’s early film The Bakery Girl of Monceau, where the protagonist’s choice to return to a bakery with a girl who’s sweet on him (no pun intended) grows into a momentous plot point.

In this first chapter of his "Six Moral Tales," Rohmer employed the unknowable device of point-of-view: we realize late in the film that high-angle shots of the male protagonist visiting the bakery are actually from the perspective of Sylvie, the girl he really loves. The fact that she was stuck in her apartment (which is kitty corner to the bakery) due to a leg injury draws an immediate comparison to Rear Window, but it’s Rohmer’s use of perspective that’s more interesting here. Not unlike Eve in North by Northwest and Judy in Vertigo, her POV shots in earlier scenes are not explained until later in the film, when she mentions her address. Only then, do we realize that Suzie was likely quite cognizant of (and subsequently confused by) the male protagonist’s pursuit of the titular bakery girl. Rohmer employs irony in these deliberate reveals to the viewer as a means of critiquing his self-absorbed male characters. The film’s conclusion often invalidates much of what the male protagonist knew, ruminated over and plotted out in elaborate detail. The ending of Claire’s Knee is another such example. After Jerome tells Claire about her boyfriend’s infidelity, an act that allows him to finally touch her knee — a small conquest he uses to quell his desire for the girl — he truly believes he’s split them up for good. But a final scene — sans Jerome — shows a tearful Claire talking to her boyfriend in a hesitant voice that hints at forgiveness.

The male voyeurism that Rohmer’s male protagonists engage in veers heavily into Hitchcockian territory — the eponymous body part in Claire’s Knee is a perfect example. It’s not only reminiscent of Madeleine’s spiral lock of hair in Vertigo (symbolizing a man’s erotic desire), but something deeper and more sinister, a need to control women. (This is an idea Hitchcock explored in movies like Vertigo and Marnie.) Rohmer’s cinematic voyeurism reached its peak in The Collector, which opens with fragmented shots of body parts belonging to the female lead, Haydée. This opening foreshadows Adrien’s grotesque obsession with our heroine and makes us complicit in his desire. It’s much like the devious shots in Psycho that link our perspective with that of the voyeuristic, murderous Norman Bates. Rohmer’s fourth instalment in the "Six Moral Tales" also hints darkly at the violence inherent in getting involved with one’s object of desire. The shots of Haydée’s fragmented body are followed by a prologue featuring close-ups of Daniel Pommereulle’s razor-spiked artwork, Objet hors saisie. She’s an object impossible to hold without hurting oneself. The artwork symbolizes the fear faced by Adrien in his simultaneous desire and loathing of Haydée.

Rohmer and Hitchcock shared a preternatural sense of logic and made films through which they could explore their repressed anxieties and desires. While Hitchcock’s characters came to their conclusions through visual cognition, Rohmer’s characters verbalized their logic. Yet, both were fascinated by masculine obsession with desire, possession and objectification. The films of Rohmer and Hitchcock feature women as works of art meant to be admired, as objects meant to be controlled. The subtext of their films is a museum sign made invisible. Ultimately for both directors, you can look, but don’t you touch. 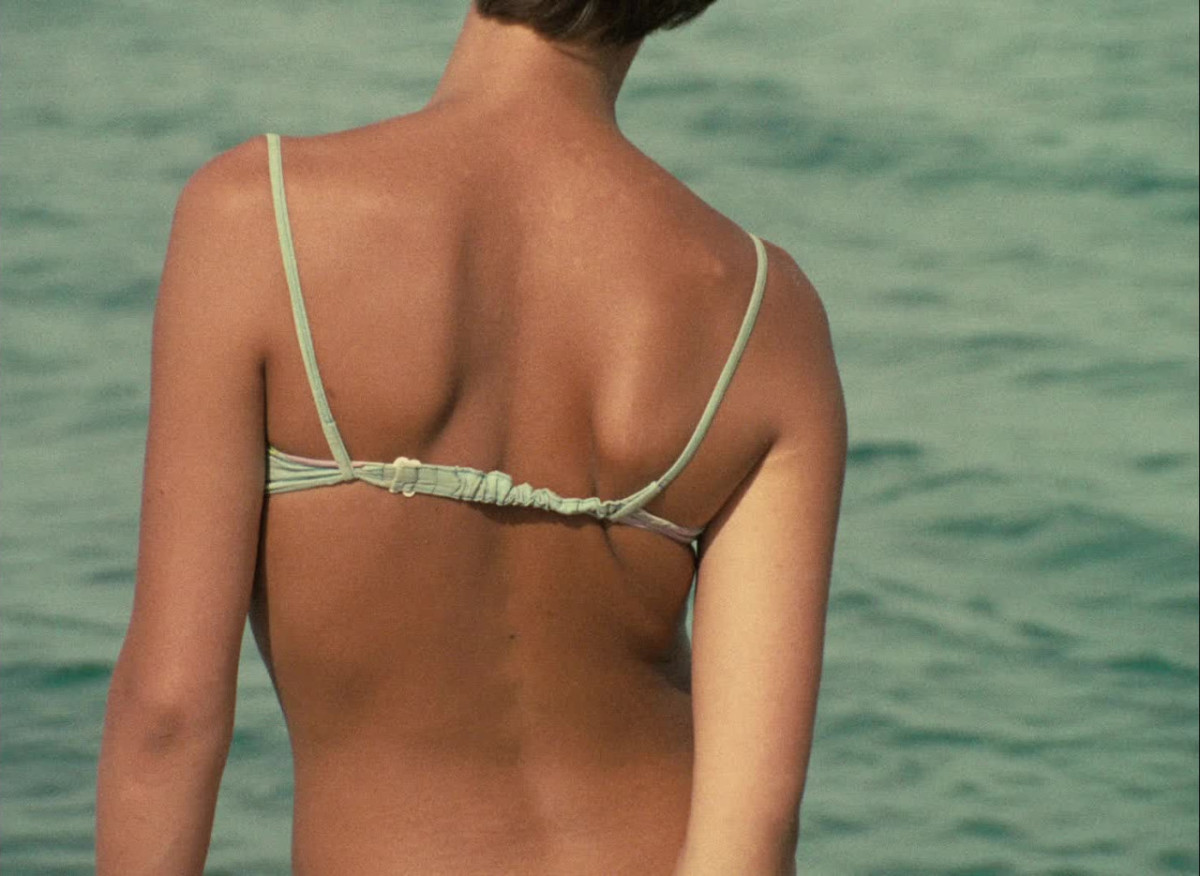 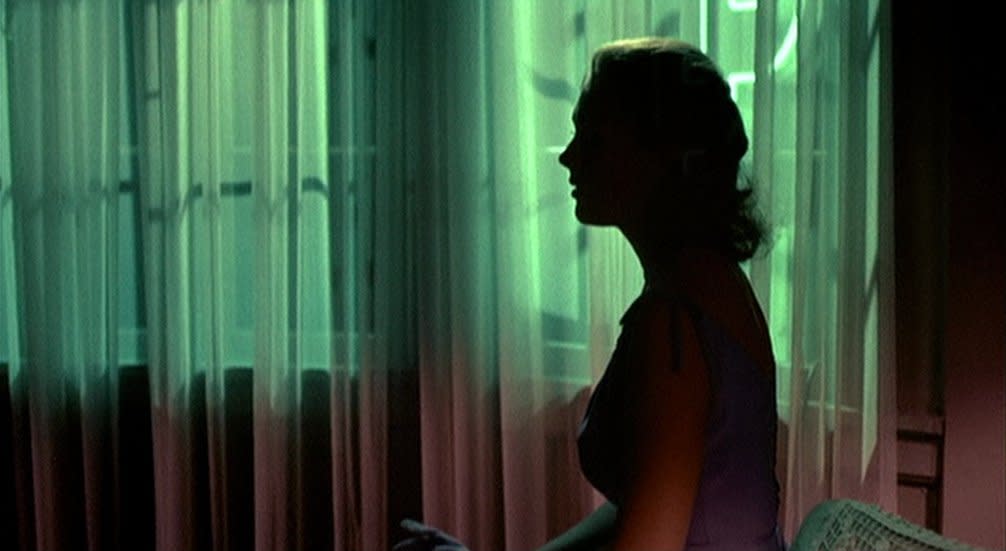 Get your Cahiers' critic fix all summer at TIFF Bell Lightbox by watching retrospectives of Éric Rohmer, François Truffaut and Alfred Hitchcock, as part of our summer Cinematheque programming.