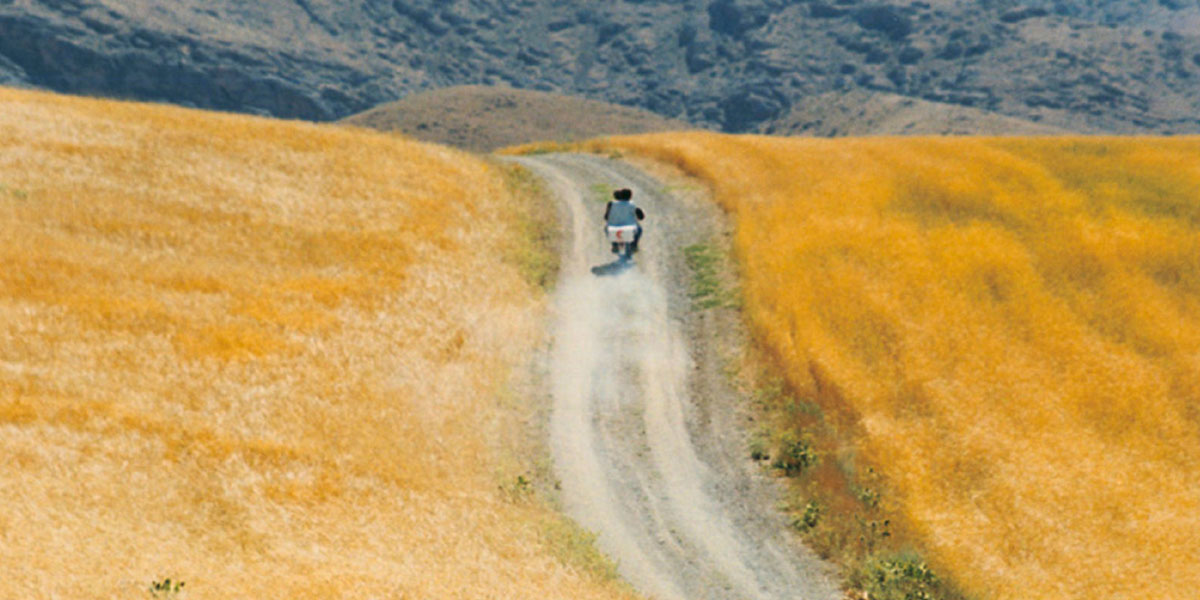 It’s ironic that the late Abbas Kiarostami, the most internationally renowned and celebrated Iranian filmmaker, was (and in some ways still is) a controversial figure in his own country — and it is all the more ironic that this artist whose films were so influenced by Persian culture, art and poetry has frequently been labelled an “exotic” filmmaker by Iranian critics. “Making movies to satisfy a Western audience” was a frequent charge against Kiarostami, and his “technical austerity” was usually considered a weakness rather than a deliberate aesthetic choice.

This is not to claim, however, that Kiarostami lacked for enthusiastic admirers and supporters among Iranian film critics and cinephiles: many of his films, including Homework (1989), Close-up (1990), Life and Nothing More… (1992), and Through the Olive Trees (1994), were named among the best films of the year in Film-monthly, the oldest Iranian film magazine. But it was not until his sad death last year that the Iranian film critical establishment widely acknowledged his achievements and recognized his unique place in the national pantheon of filmmakers: a retrospective of Kiarostami’s major films was held at the Iranian Artists Forum, and many Iranian film publications printed lengthy appreciations and critical essays devoted to his work, as well as some translations of English and French criticism.

As it happens, the very first long-form critical analysis of Kiarostami’s cinema was written by an Iranian film critic, Iraj Karimi, in a book titled Abbas Kiarostami, The Realist Filmmaker. Written in 1986, the book covers Kiarostami’s early films made for the Institute for the Intellectual Development of Children and Young Adults (Kanun), from The Bread and Alley (1970) to First Graders (1984). Elaborating on the complicated and ambiguous nature of the term “realism,” Karimi argues that Kiarostami’s work draws inspiration from both the neorealist and cinema verité traditions, but that unlike the neorealists, Kiarostami only captures the outer surfaces of reality without digging down into the deeper social and political forces that shape those surfaces. Nevertheless, Karimi does acknowledge Kiarostami’s originality and unique “directorial vision,” and by astutely comparing the director’s educational films with his fictional narratives, he anticipates the evolution towards a more intricate self-reflexivity in the great films to come, i.e., Close-up and the Koker trilogy. 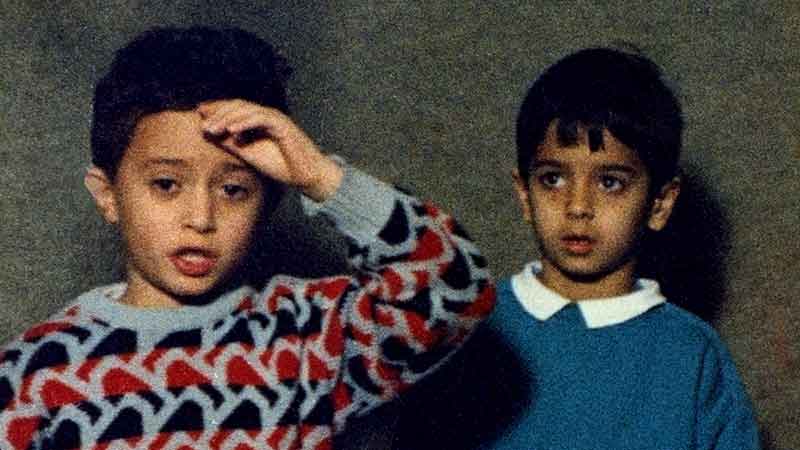 What Karimi misses in his analysis, however, is how Kiarostami’s deceptively simple realism actually does the very thing he claims it does not: reveal those deeper forces that shape reality. Kiarostami was always sensitive to his surroundings and true to his inner values, but refused to express this through topical commentary. For example, Homework (which was released after the publication of Karimi’s book), although ostensibly one of the director’s educational films, can also be read as a genuinely political work, one which obliquely criticizes Iranian society, family structure, educational system, and even comments on the Iran–Iraq war. In one of the film’s most famous scenes, Kiarostami talks with a frightened little boy named Majid, who cannot stop crying in front of the camera. Without any overt commentary, Kiarostami here shows a product of the state’s educational system: a system which rewards lying and promotes punishment, oppression and fear, a system that forces children to suppress pleasure in life and instead pay homage to death, as seen in a devastating sequence where the students are forced to participate in a mourning ceremony in the schoolyard. At the end of the film, however, Majid is encouraged by his friend to sing a childish religious song, and his slowly emerging joy — in contrast to the enforced obedience of the ceremony — is both a beautiful moment and a profound political statement.

Two decades later, after Kiarostami had achieved his great international success, Mazyar Eslami and Morad Farhadpour published Paris-Tehran, a widely read book that severely criticized Kiarostami’s cinema. Dismissing much of the Western writing on Kiarostami as criticism without context, the authors charged that his cinema was fundamentally apolitical and conservative, claiming that the pastoral beauty of the Koker trilogy, Taste of Cherry (1997) and The Wind Will Carry Us (1999) was intentionally designed to attract the “Western eye” and that his self-reflexive techniques were nothing more than shallow postmodernism. Eslami and Farhadpour also condemned the absence of women in Kiarostami’s work — a charge which, to be honest, influenced the way I looked at the films at that time.

Returning to Paris-Tehran now in light of the films that Kiarostami made in the last decade of his life, it is frustrating that the book’s highly knowledgeable authors let their resentment towards their subject blind them to the fact that the “shallow, postmodernist” techniques they condemn were in fact a deepening, increasingly intricate exploration of the very social and political concerns they contend are absent from the director’s work. By questioning everything that is represented on the screen — the narrative, his own role as director, his non-professional performers’ closeness to or distance from the characters they play (which becomes even more complex when they are playing “themselves”) — Kiarostami asks a larger question, one that is central to politics: Who has the power to shape reality? And by asking that question, he also shows how that power can be contested. 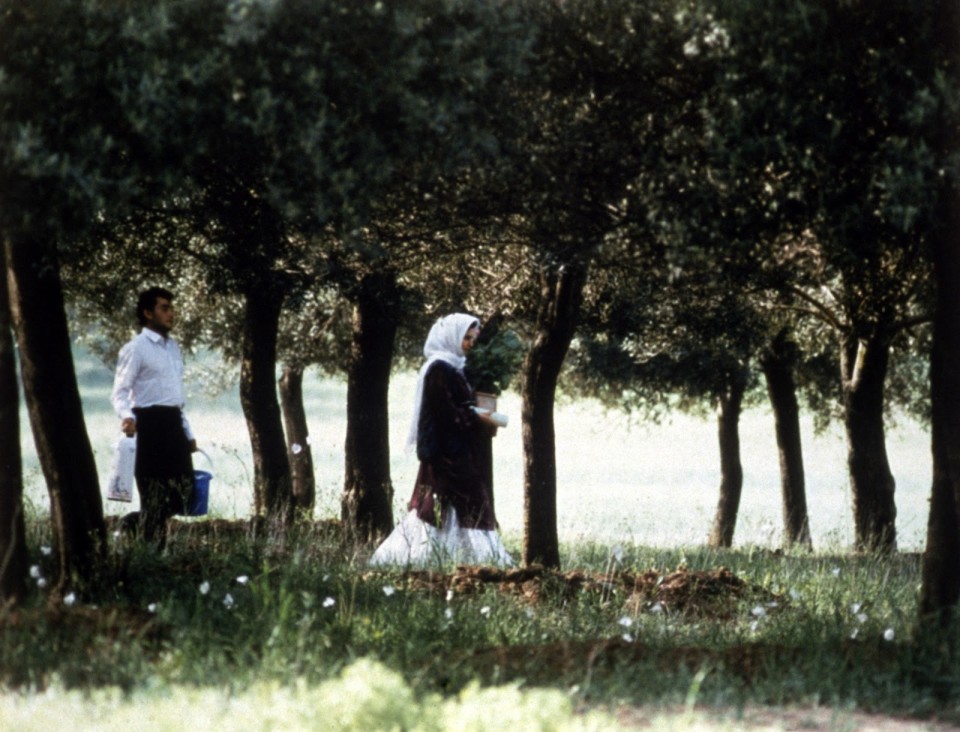 For this reason, Through the Olive Trees is as important a turning point for Kiarostami’s cinema as is Close-up. Fictionally recreating the shooting of Kiarostami’s previous feature Life and Nothing More…, Olive Trees focuses on a young man named Hossein, who played a small part in Life. In that film, the actor playing Kiarostami encounters Hossein as the latter is clearing up debris from the earthquake that has devastated the region; Hossein tells the filmmaker that he married his fiancée the day after the catastrophe, because life should go on. Witnessing the shooting of this scene in Through the Olive Trees, we see that Hossein (who really did live through the earthquake) is coerced by the film’s Kiarostami surrogate (Mohammad-Ali Keshavarz) to alter the details of his experience for the purposes of the film: at one point, Keshavarz insists that Hossein should say that more than 60 members of his extended family died in the earthquake, even though Hossein confesses that he only lost 25 relatives.

Even as Kiarostami here shows how cinema can design, construct and distort reality, he also shows how real people can resist the roles to which they are assigned — a theme which becomes entwined with a critique of women’s status within traditional Iranian society. It is revealed that Tahereh, the young woman who plays Hossein’s wife in Life and Nothing More…, is not his wife at all: Hossein had asked for her hand in marriage, but her family rejected his proposal due to his poverty. Now, as they play husband and wife for the benefit of the camera, Hossein attempts to woo the unresponsive Tahereh in between takes, revealing the differences between their “on-camera” and “off-camera” selves. In one part of the acted scene, Hossein speaks harshly to Tahereh because he cannot find his socks; when the camera is turned off, however, he softly explains to her that the director forced him to do this, and that he would never behave like this in real life. Marriage is about their happiness, he goes on: he does not want a wife only for cooking or washing clothes, and he will support Tahereh as she continues her studies. Later, when the director surrogate Keshavarz instructs Tahereh to call her onscreen husband “Mr. Hossein,” and she in defiance continues to call him Hossein, the young man defends her: some local women no longer call their husbands “Mister,” he explains, so it wouldn’t be implausible to include this detail in the film. 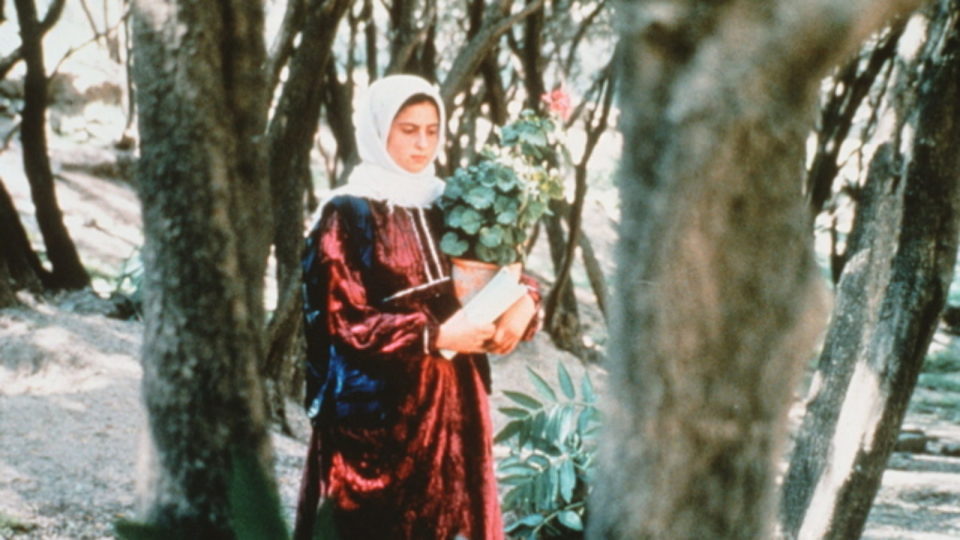 The quiet resistance of Tahereh in Through the Olive Trees reveals Kiarostami’s increasing concern about both the role and the representation of women in Iranian society and cinema, and her stubborn independence predicts the strong women who would increasingly come to populate the director’s films: the ancient, unseen old woman who refuses to die for the benefit of a Tehran documentary crew in The Wind Will Carry Us; Mania Akbari’s driver in Ten (2002); Juliette Binoche’s antiques dealer in Certified Copy (2010), and Rin Takahashi’s student/escort in Like Someone in Love (2012). Even as he revealed the inherent artifice of cinema, Kiarostami understood that representations of reality are a part of that reality, not just a distortion of it. By showing women who, in their various ways, defy the demands placed upon them by men, Kiarostami not only explored the deeper layers of his country’s reality, but showed how that reality might better be shaped.