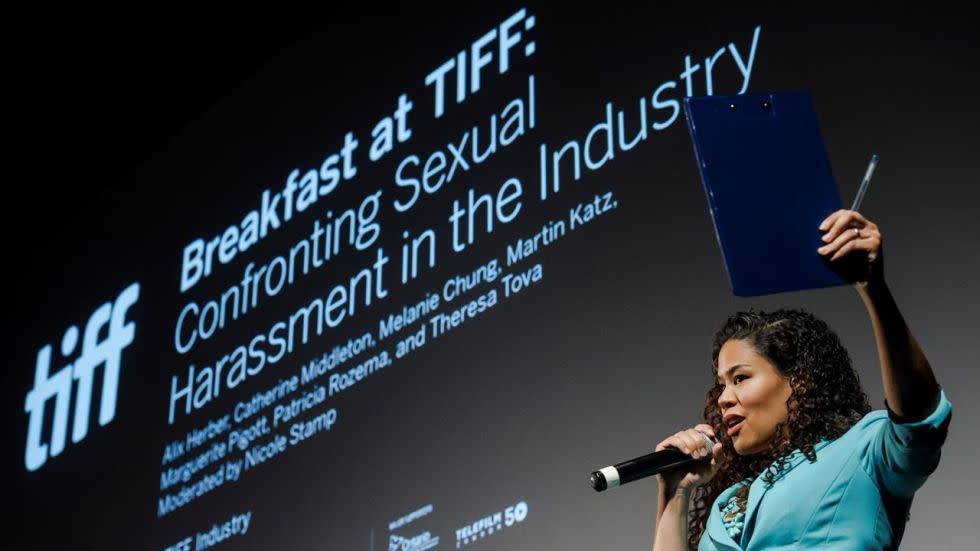 Watch a Breakfast at TIFF panel discussion featuring Patricia Rozema and representatives from ACTRA and the CMPA, with a closing note from Sarah Polley

Since The New York Times first published a news story on October 5, chronicling accusations of sexual predation levelled against Harvey Weinstein, many more men and women in Hollywood have come forward with their own stories of harassment and assault at the hands of powerful men. On December 1, TIFF gathered a group of industry leaders, filmmakers, and activists together for an onstage forum to discuss the issue of sexual harassment in Canadian film and television.

This edition of our Breakfast at TIFF series was moderated by Nicole Stamp, a Toronto-based actor whose viral Facebook essay “What decent men can do in response to #MeToo” has been shared over 70,000 times online. Contributing to the dialogue was Marguerite Pigott, Vice-President of Outreach and Strategic Initiatives of the Canadian Media Producers Association (CMPA); Catherine Middleton, a representative of the Director’s Guild of Canada; film producer Martin Katz (recent credits include Ingrid Veninger’s He Hated Pigeons and David Cronenberg’s Maps to the Stars); ACTRA president Theresa Tova; Alix Herber, a Toronto-based lawyer instrumental in drafting workplace policies; and filmmakers Patricia Rozema and Melanie Chung.

The lively, productive discussion focused on what industry professionals can do to create safer work environments and enact change. This includes a commitment to implement new policies within the participating unions that allow victims of sexual assault to come forward without fear of consequence. Both ACTRA and the CMPA have since pledged to create expedited reviews of sexual harassment and abuse claims within 48 hours.

2017’s #MeToo movement is a watershed moment for the way we think about an issue many have turned a blind eye to, no matter how pervasively it appears across all industries and in daily life. It touches on many factors central to the discussion of sexual harassment, such as gender, race, and class, particularly in the film and television industries, where issues of representation are of paramount importance. As Chung remarked: “Gender parity is only part of the solution — equal pay, accountability, consequences also need to be addressed. There needs to be seismic shift in the representation and perception of our gender."

The onstage panelists agreed that the culmination of stories this past autumn signalled a wake-up call. Filmmaker Sarah Polley, who was seated in the audience, got the final word during the Q&A portion of the talk, stating: “Most of us have been complicit in this culture. That complicity is changing. Give people license to intervene on set without consequence. That message from leadership is very powerful. Let's all learn good behaviour now, together."

You can watch the full hour-and-half panel discussion below. The next Breakfast at TIFF event will focus on the ethics of film criticism, broadcasting, and programming, and takes place during the all-day Industry Forum at the Canada’s Top Ten Film Festival on Friday, January 12.

TIFF Long Take - Ep. 42: Where Does Hollywood Go After #MeToo?

What Can Straight White Guys Do to Help Women in Film?