Black Women in Film and Television 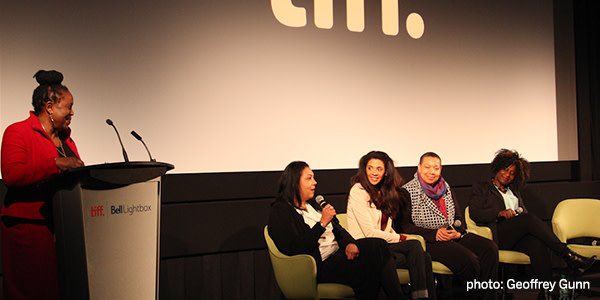 Black Women in Film and Television

This panel discussion highlighted some of the triumphs by black women in the film and television industry, and the challenges they face.

Higher Learning invited post-secondary students and faculty to take part in a panel discussion moderated by June Givanni, an established curator of African and African diaspora cinema. The panel was comprised of four female industry leaders who have worked in the film and television industries for the past thirty years. Their discussion highlighted some of the triumphs and challenges that black women have faced in these industries and the opportunities black filmmakers and producers have to tell their stories. The panel considered the representation of black stories in film and television. It was suggested that, while there may be more successful black actors, the number of black storytellers producing and directing films has not changed dramatically.

In partnership with Black Artists' Networks in Dialogue (BAND), this Higher Learning event was held on February 29, 2014 at TIFF Bell Lightbox.