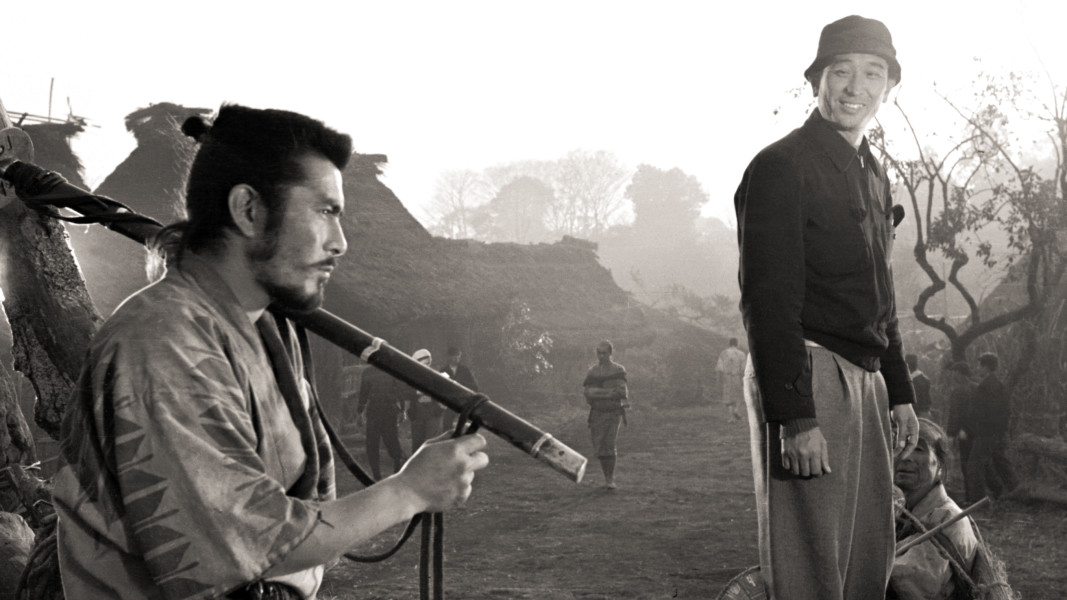 The first of several profiles of the great Japanese directors spotlighted in this season’s flagship TIFF Cinematheque programme Summer in Japan.

The hipster abbreviation “J-cinema” might seem inappropriate when writing about a figure as magisterial as Akira Kurosawa, for whom the more traditional designation sensei, with its connotations of wisdom, authority and dominion, could have been invented. But Kurosawa’s long-held reputation as the Japanese filmmaker, the Mt. Fuji–like master of postwar Japanese cinema, has obscured his more capacious importance as the source and master of many strains of popular genre, the font of such pop phenomena as the Star Wars saga and spaghetti westerns, and the origin of a term for the relativity of truth — “Rashomon” — which long ago slipped the culturally specific bounds of its derivation to become common international currency.

The first Japanese director to make a major breakthrough in the West, Kurosawa enriched its film culture with countless loans, mostly formal (lightning-cut widescreen frenetics, feverish cross-cutting and propulsive narration, slow-motion violence, sinuous tracking shots) but also tonal (a Shakespearean mix of pageantry and pungency, of profound tragedy and knockabout gallows humour). Borrowing from Western literary sources both high (Shakespeare, Dostoevsky, Gorky) and low (American detective novels), and from Hollywood and Soviet cinema (film noir, Ford, Eisenstein), Kurosawa more than amply repaid his debts. One of the most internationally influential directors in the history of cinema, he introduced editing and narrative techniques that would inspire (or be copied by) such directors as Sergio Leone, Sam Peckinpah, George Lucas, Martin Scorsese, Steven Spielberg, Francis Ford Coppola, Walter Hill, and just about any subsequent director who has shot and cut for maximum visual-visceral impact. 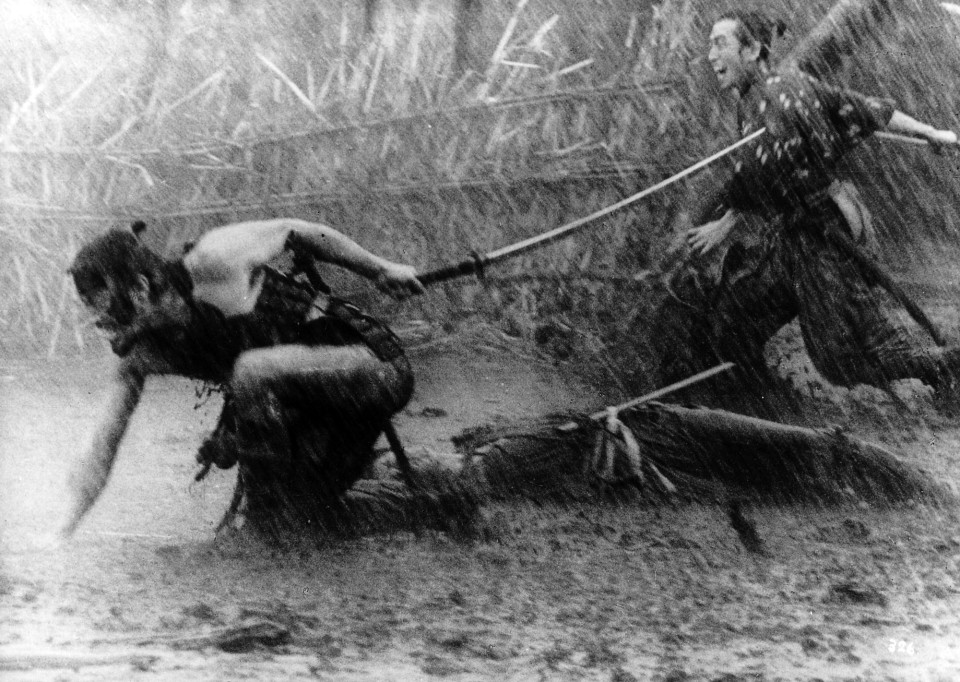 Brash, dynamic and jokey, measured, ornamental and contemplative, Kurosawa's films inhabit many worlds (mean streets both medieval and modern, the code of both the bushido and the corporate boss) and encompass several genres and tones, by turns full of humanist pathos (Ikiru), primal passion (Rashomon), or apocalyptic iniquity (Ran). The images with which Kurosawa is most frequently associated — battle scenes roiling with armour, flags, and fire, samurai wreaking havoc amid ruck and rain — tell only a small part of the story. The ruinous streets of postwar Tokyo were as much Kurosawa’s terrain as the sere, elemental landscapes where he choreographed his feudal combats (most famously the rain-lashed fields of Seven Samurai). The perfectionist director scanted nothing in his determination to achieve the exact atmospheric effect; little wonder that the director’s veteran assistant Teruyo Nogami titled her marvellous memoir of Kurosawa Waiting on the Weather!

Much as Mizoguchi’s career was often synonymous with that of Kinuyo Tanaka and Ozu’s was identified with such regulars as Chishu Ryu and Setsuko Hara, Kurosawa’s canon centred on his collaboration with Toshiro Mifune, with whom he made 16 films extending from Drunken Angel in 1948 to Red Beard in 1965. Although Kurosawa and Mifune shared many aspects — both were intense, forceful, hard-drinking and disciplined — theirs was not the uncanny concert of, say, Ingmar Bergman and Liv Ullmann, in which the star was both muse to the master and an incarnation of his secret self. Rather, their collaboration was founded upon a volatile, ongoing negotiation between the autocratic director — aristocratic in demeanour, peremptory and authoritarian — and his mercurial leading man, who exhibited humility, ingenuous need and, perhaps contrarily, a certain feral vehemence. (Little wonder that Stuart Galbraith IV titled his joint biography of the two men The Emperor and the Wolf.)

Kurosawa immediately recognized that wildness in Mifune when the two men met at the Toho studio — where Mifune had originally arrived in hopes of becoming an assistant cameraman, and was instead drafted into the studio’s “New Face” program for emerging talent — and that wildness seemed to elicit in the director a sense of venture, of risk and expansiveness. Uncharacteristically revising his original plan for Drunken Angel when the blazing young actor showed a Brando-like febrility, Kurosawa “turned loose” Mifune, whose extravagant performance as a pomaded yakuza with tuberculosis made him a star. 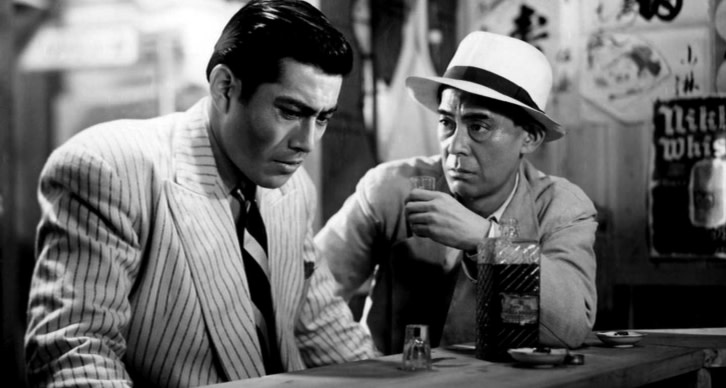 While Mifune’s relationship with Kurosawa has frequently been compared to John Wayne’s with John Ford — and Mifune has also been likened to Clint Eastwood, no doubt because flinty Clint said he modelled his performance on Mifune’s when he starred in Sergio Leone'sYojimbo remake A Fistful of Dollars — it is difficult to square the leathered, laconic, tamped and invariant quality of Wayne and Eastwood with the speed, explosiveness, and emotional intensity of Mifune. More torrential than the rain that frames the story of Rashomon — the film that established Kurosawa and Mifune as the leading lights of their nation’s cinema in the eyes of the West — Mifune’s performance lays waste to good taste with its wild excesses. Stripped and capering, all eyebrows, armpits and glinting teeth, he is less bandit than beast of the jungle. 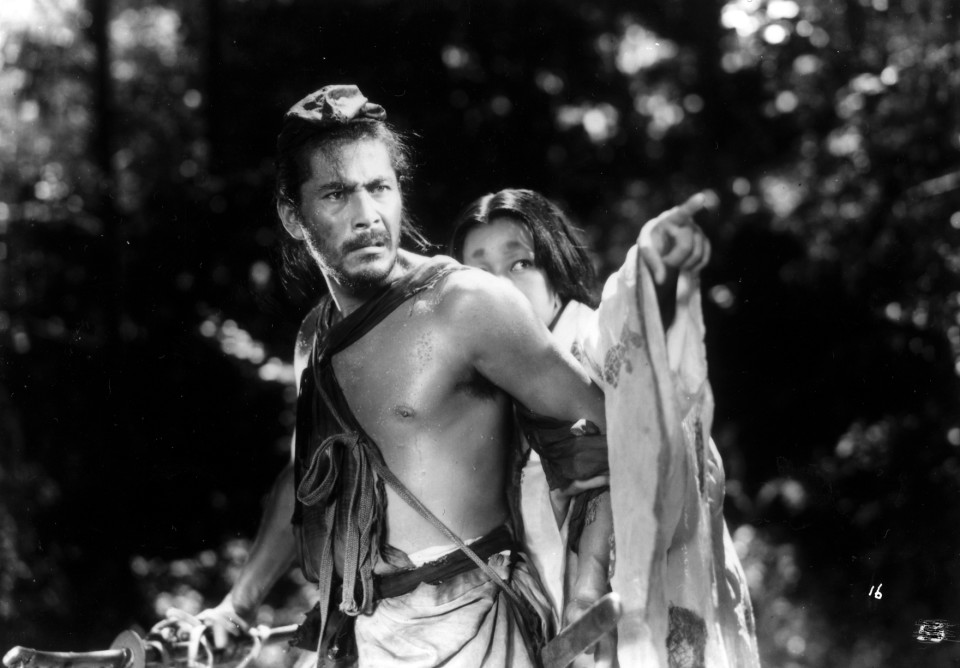 Mifune and Machiko Kyo in Rashomon

Similarly, Kurosawa’s dense, muscular compositions in Seven Samurai can hardly contain the volatile performance of this Toshiro Typhoon, whose swaggering exaggeration in the early sequences imperils the surrounding rice paddies more than it does the marauders. Mifune’s modulation from manic to tragic in Samurai is one of the great achievements of his career, and signals the depth and range of his acting.

Left to right: Mifune in Stray Dog, Seven Samurai, and High and Low

Electrifying as the young cop who searches the Tokyo underworld for his missing gun in Stray Dog, grim and contained as the self-made tycoon bedevilled by a kidnapper in High and Low, both stoic and fiercely frenetic as the masterless samurai in Yojimbo and Sanjuro, wise and sternly compassionate as the top-knotted doctor in Red Beard, the multifarious Mifune became a kind of ideal or icon of postwar Japan, while Kurosawa — who had been increasingly criticized for his Western influences by Japanese critics — suffered a mental breakdown and attempted suicide after the failure of his first post-Mifune film Dodes’ka-den. Certainly, the sad story of the final split between the intractable director and the glowering actor suggests that the sensei was acutely aware of how reliant his cinema had become on the force of Mifune, and that he resented it. That the two men died within nine months of each other only sealed this seeming sense of locked destinies, even though they had not worked together in 30 years.

High and Low with Kerri Sakamoto