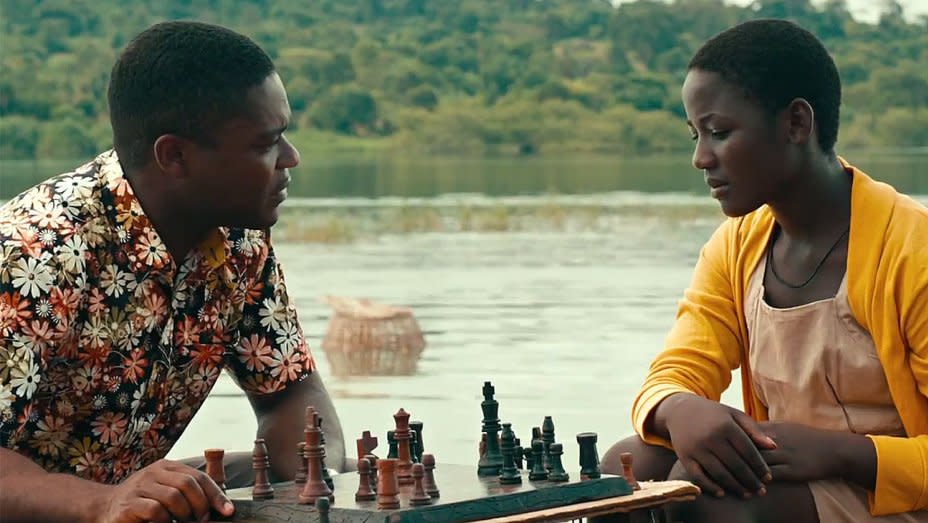 The director on how she made a movie with an all-African cast — including her former intern, Lupita Nyong’o

Premiered at TIFF in 2016, Mira Nair’s Queen of Katwe tells the true story of 10-year-old chess champion Phiona Mutesi, who learned how to play the game in Katwe, the largest slum in Kampala, Uganda. After her father died of AIDS when she was eight, Phiona and her mother began selling maize on the streets to support themselves. Opportunity struck when missionary Robert Katende taught Phiona chess at an afterschool program; she went on to become one of Uganda’s first female professional players, representing her country at four Olympiads.

Starring newcomer Madina Nalwanga, who was discovered in a community dance troupe performing for tourists at a Kampala hotel, Nair’s dramatization of Phiona’s story sports a $15 million budget, an all-African cast featuring many children from Katwe’s neighbouring communities (even the film’s Hollywood co-stars, Golden Globe nominee David Oyelowo and Oscar winner Lupita Nyong’o — who was once an intern for Nair — boast African heritage), and a woman of colour behind the camera — which, as Nair noted in an interview with Wired, makes it “a radical film for Disney in many ways.” The film is inspiring and family-friendly, but doesn’t shy away from the grim realities of Phiona’s origins and the community from which she came; as Nair says, the film shows “beauty and barbarity side by side.”

Nair introduces Queen of Katwe and participates in a post-screening conversation on June 5 at TIFF Bell Lightbox, as part of TIFF’s ongoing Books on Film series, hosted by Eleanor Wachtel. We spoke to Nair via telephone about the film’s development from ESPN article to screenplay, her new project (a Broadway musical version of her 2001 film Monsoon Wedding), and if she’s as excited for a rumoured project starring Rihanna and Lupita Nyong'o as Twitter is.

The story of Queen of Katwe was originally developed from a 2011 ESPN article written and later adapted into a book by Tim Crothers. How involved were you in the development of the film, from reading the original article to the final screenplay?

I hardly even read the article — it was just the springboard for the idea that Disney executive Tendo Nagenda brought to me. I was immediately intrigued: the lead subject, Phiona Mutesi, lived 15 minutes away from me. I had never heard of her in Kampala, because she wasn’t known beyond the chess community. I asked to meet her, and two months later, we were in Lincoln Center as she played Garry Kasparov at a chess conference. We bonded instantly, being fish-out-of-water in New York City. It was Phiona who attracted me, through the power of her story. She’s a self-possessed and modest person with an unbelievably clear mind. Later, she became my chess teacher.

I come from a documentary background; I find the truth more infinitely more powerful than fiction. I met [Phiona’s] mother, Harriet, and she took me to all the places they’d travelled to as a family. There were abodes in street corners, abandoned places, the one room the family lived in; we walked those streets. There was a reality to that truth; a power, as well as a sweetness. I consider Kampala my home because I have lived there for 27 years. So I wanted to tell a story of my own backyard; a life lived with dignity, as well as struggle. Phiona’s story gave me the possibility not just to tell the story of one girl, but the story of her mother, her family, her community, and the people around us who let us achieve our dreams. It was this beautiful chance because there is so little told — and so myopically — about African culture. You never see it on screen.

Since Queen of Katwe premiered at TIFF 2016, it’s been a landmark year for people of colour telling their stories on screen. How do you feel about the industry right now, in terms of diversity and representation in film?

I feel that you have to do your best work always. In doing that, you choose your point of view. If something you make opens doors, it’s a beautiful thing. But you have to do the work, not just think about the outcome of it.

Nothing is more powerful than to see one’s self, one’s colour, one’s language, one’s struggle, and one’s story on screen. Growing up in India, all the kids’ names in our books were names like John, Dick, and Harry. I still remember when I first saw a short story published with the names of Mina, Rajesh, and Ms. Netta. Seeing those names on the printed page, the same names of the people in my life, was unbelievably powerful. They [made me realize] there could be stories that came from where you’re standing — not some other place, [but] about you.

Hopefully, Queen of Katwe can help us look at Phiona and what she’s doing — the ability to use her mind to play a game that also helps to inform how she sees her own life. It’s very interesting, that message of how to use chess in one’s daily struggle. That’s a thing any kid can see, from anywhere.

How has it been for the community of Kampala to see themselves reflected in this $15 million Disney movie?

Well, Kampala is the pirate capital [of Uganda] — everything is pirated there, all the movies. I was told by my pedicurist: “Oh, we have already seen it [my film], the animation in the title sequence was so great.” (Laughs) They would pirate the trailers beforehand, put that on DVD, sell it as the film, then people would buy it!

Anyways, it’s wonderful. I can’t get my car washed without people coming up to me saying, “the one.” They call me “the one,” as in, “are you that one [who made that movie]?” It’s really sweet. All the kids in the film came from those communities, including two great Hollywood actors [Nygong’o and Oyelowo], who are also from the region. It’s a movie that really was made with the people.

You’re now deeply involved in another adaptation, the musical staging of your beloved 2001 film Monsoon Wedding. How’s that process going?

It’s full-on, it’s going, it’s selling to backhouses now. We opened at the Berkeley Repertory Theatre on May 19, and the run keeps getting extended! We have a brilliant first draft of what we now have to do and work on for months as it goes to Broadway, then to India, then to the world. So far it’s been a beautiful experience and a very happy one, because we’ve been cooking with my team for over ten years now. It’s been wonderful to have it come to life, as it gets closer to its first time on Broadway, with some bells and whistles.

Can we get a sneak peek of what you’ll be discussing with our Books on Film audience?

For me, it’s all about demystifying the process of making art, whether it’s a book, a film, or a stage play. So in these talks, I want to make it possible that people feel that they can do this — if they must. The “if they must” part is critical, because filmmaking is an obsessive task and it is a difficult one. You have to want to do it so much that you can’t think of not doing it, because it’s also about teaching yourself the craft, having that passion. Otherwise, it’s too difficult to go on and it will fall away.

I’m curious if you’ve heard that your former intern and Rihanna are going to be in a movie together, directed by Ava DuVernay, no less!

Are you excited to see that particular project?

Totally, totally! I’ll be there in my sari at the premiere. (Laughs) I can provide the Indian quotient.