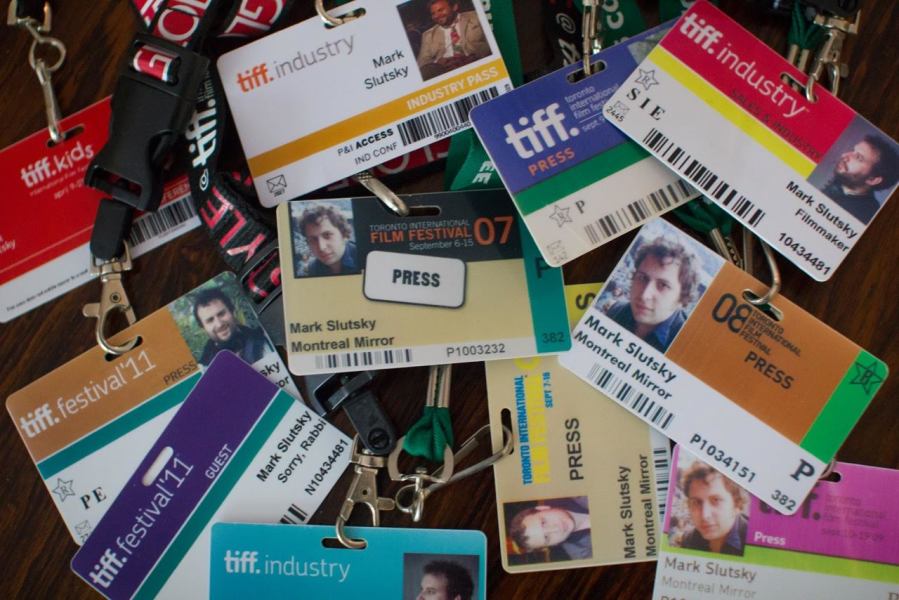 A filmmaker/critic/new father remembers the TIFFs gone by

The Toronto International Film Festival has loomed large in my life ever since I was a movie-mad teenager growing up in ‘90s Toronto, lining up for rush tickets in Yorkville. About a decade later, I began attending the festival in earnest, first as a critic for the late, lamented weekly the Montreal Mirror, and then as a filmmaker in my own right with selections in the fest. Even in the years when I didn’t have a film at TIFF or some other legitimate excuse, I’d find some reason to make it there. Starting as it does, a few days after my birthday, it always feels like the beginning of my calendar, and one of the only times in the year I interface with the film industry at large.

This year marks the first year in 11 that I won’t be attending the festival, as I find myself the father of a three-week-old infant daughter. Honestly, fatherhood makes the prospect of not attending TIFF seem pretty trivial, but it still feels extremely weird to be missing the days where I'd see four movies in a row, the incomprehensible parties and the friendships that only seem to exist in the first couple weeks of September.

In an attempt to process my surprisingly strong feelings about missing TIFF, I spent some time reviewing the blurry, out-of-order stock of several decades of festival moments filed away in my terrible memory. A jagged narrative seemed to emerge.

2007. I’m in a hotel room at the Intercontinental, interviewing a critically-beloved director about her latest film. Her phone rings; it’s Harvey Weinstein on the line. She takes the call. I sit there awkwardly and listen to her beg him for a decent release date.

2011. I’m a participant in TIFF’s Talent Lab program where emerging filmmakers spend four days hanging out with and talking to established filmmakers, some of who (Brian DePalma!) are basically my idols. One of the “governors” this year, meaning he spends the entire week with us, is Bingham Ray, founder of October Films. He’s an indie film legend and is basically the person who brought Mike Leigh to American audiences, among many other achievements. We all love Bingham. He wants to talk and hang out and see our movies. We cherish a moment during a Q&A with an esteemed older filmmaker and the filmmaker’s sleazy new partner. As the younger guy condescends to and talks over the aging legend, suddenly Bingham mutters,“This is bullshit!” and storms out of the room. He dies of a heart attack five months later. Rest in peace, Bingham. You were wonderful.

2007. I attend a TIFF Cinémathèque screening of Jean Renoir’s magnificent La Grande Illusion at the AGO, hosted by Peter Bogdanovich. (He fits in an Orson Welles impression in his intro.) Afterwards, a man approaches me. This is the conversation that follows:

MAN: Excuse me, do you know when this movie was made?

ME: Yeah, I think so… Around then…

MAN: They’re showing a movie from 1938 at the 2007 Toronto International Film Festival?

ME: Yeah, well, they show a bunch of old movies every year.

MAN: How are you supposed to know?

1992. We wait in line at the Varsity theatre for rush tickets to Hal Hartley’s Simple Men. I am young and dumb and I don’t know much about movies, but I do know that Hartley’s work speaks to me in some deep and special way. We get in, and after the movie ends, I go up and shake the director’s hand. I never forget it.

2011. I’m excited, very excited, for the premiere of my short film Sorry, Rabbi, my first successful entry into TIFF. And yet, as the film plays, I feel sick. Having spent so much time thinking and rethinking my vision, seeing my movie with an audience of mostly strangers is a shock. What is this thing I’ve made? Why did I ever think it was good? That feeling of disassociation is one I become more familiar with over the years. Though it never affects me again quite so profoundly, it remains a reality check I return to over the years.

2007. During the “river chase” scene at the Press and Industry screening of the Coen brothers’ No Country for Old Men, the man sitting next to me says loudly, “Well, I’ve never seen that before!” For some reason I never forget this.

2015. The thing about film festivals is when you’re making films, you want desperately to get into them. Even if you tell yourself you don’t, everything else seems secondary, because it means that you’ve transcended to another level of filmmaking. Then you do, and you realize, particularly if you make shorts, that you’re starting again at the bottom rung of another ladder. And now you’re going to be judged against another whole group of very successful and talented people. This can be hard to deal with, as I found out when I screened Sorry, Rabbi in 2011. Anyway, all this is to say I successfully screen my second short film Never Happened at the festival without having another panic attack.

2011. At the exclusive “Filmmakers’ Brunch” for directors, I notice name tags for directors who have films in that year’s fest: Werner Herzog, George Clooney, Francis Ford Coppola. Of course they don’t show up at the brunch, and would they have even worn name tags if they had? I steal Madonna’s. 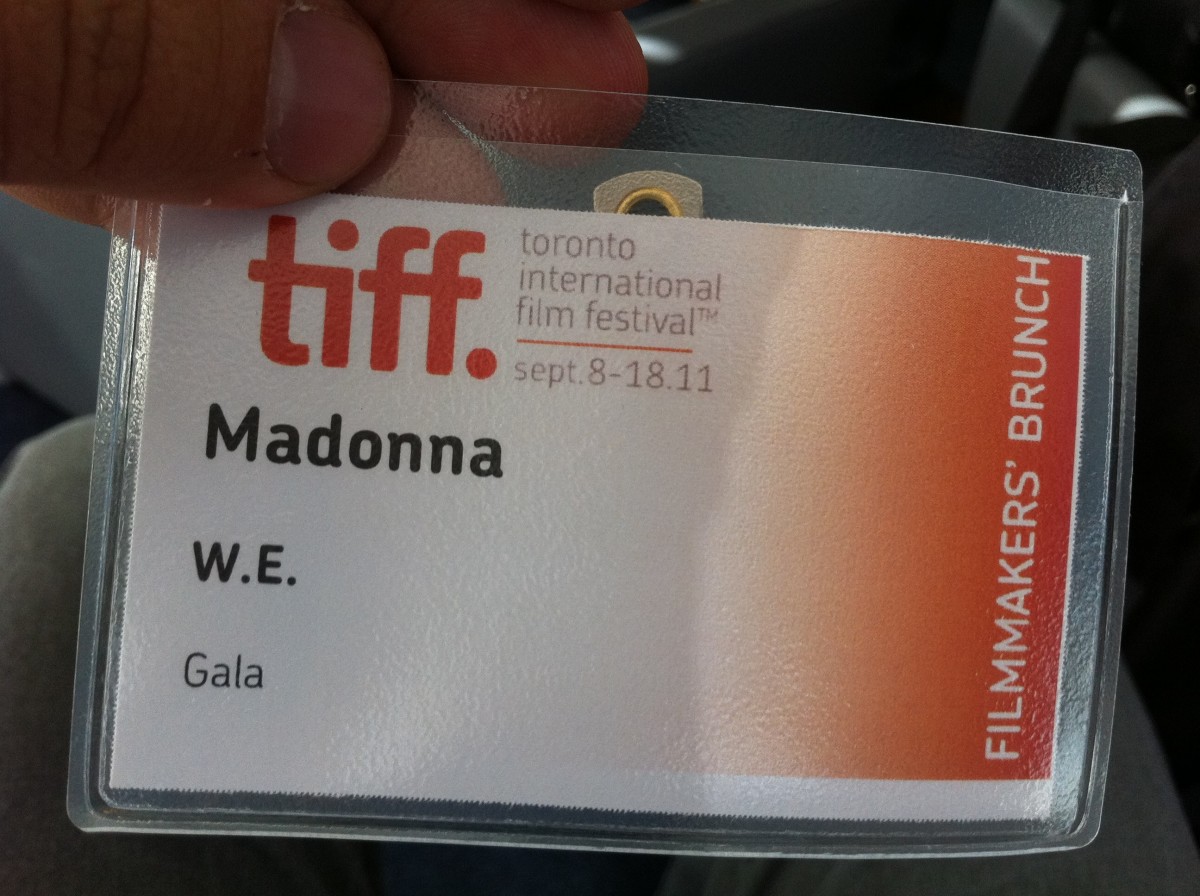 2005. My partners in the Montreal underground film collective Automatic Vaudeville Studios are anointed the Drake Hotel’s “Artists In Residence” for the duration of the 2005 festival. Nobody, including ourselves, seem to have any idea what we’re doing. We get drunk at half-empty parties in cavernous tents. We borrow heavy wool vintage tuxedos and attempt to interview people on red carpets. I tell Atom Egoyan and Arsinée Khanjian that they’re “Canada’s number one film couple!”

2010. In a report from the festival, I describe a movie (a remake of a Swedish film), as “perfectly well-made, tasteful and good and everything, if a little pointless.” That sentence is later quoted in the advertising for the film, with the phrase “if a little pointless” excised.

2006. I’m excited to see Rescue Dawn, Werner Herzog’s fictionalization of his 1997 documentary Little Dieter Needs to Fly. I show up for the 10 am Press and Industry screening, only to realize the film was actually scheduled for 10 o’clock that night. I text my friend, writer Liz Clayton, who tells me to come see a movie called Syndromes and a Century by a Thai director I’ve never heard of. He is named Apichatopong Weerasethakul. Knowing nothing at all about it, I dip into the theatre and emerge utterly transformed by its beauty, wit and soft light. It’s still one of my favourite movies of all-time. 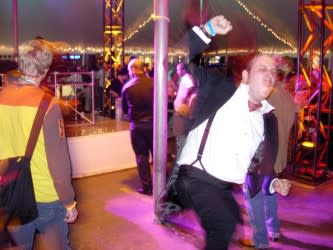 2010. In the process of working on Yung Chang’s documentary The Fruit Hunters, I become friends with the actor Bill Pullman. He is in Toronto for the 2010 TIFF, so we hang out. Somehow, I end up leading him, Irene Jacob and Charlotte Rampling to Mother’s Dumplings in Chinatown, where we sit on old couches in the back of the restaurant and sip red wine out of paper coffee cups. Then I take them to see Kelly Reichardt’s Meek’s Cutoff, but the rest of this story is reserved for my memoirs.

2007. I’m at an early-morning screening of Werner Herzog’s Antarctica doc Encounters at the End of the World at the ROM theatre. When the movie ends, a title card announces that it is dedicated to Roger Ebert, who at that point was still attending the festival, but was beginning to show the serious effects of his illness and could no longer speak. When the lights come up, I look over and see that he is sitting just a few seats over from me.

2010. Biking up McCaul to get from a screening to an interview at the Bloor Intercontinental, my front tire gets stuck in the streetcar track and I go flying over the handlebars, landing on my ribs (several of which crack). The next day, I drop my iPhone and shatter the screen. I have to explain to everyone that week that it broke in a completely separate accident.

2011. After many years of working on projects that do not get into TIFF, I find out one July afternoon that my short Sorry, Rabbi has been accepted. I am thrilled, but it triggers something in me. The following day, I have a psychedelic-inspired meltdown while on trip to a cottage with my friends. I’m convinced that my kidneys are failing. Sitting on the couch in a ‘70s-era chalet, my eyes are drawn to a beige, curving, organic statuette on the mantel across from me. I realize that I’ve been half-noticing these all over the house all day, but have no idea what they are. Just as I’m in contemplation, the thing sprays something in my direction, in a moment of pure Cronenbergian horror. All I can do is laugh, and the spell is broken. It was just a weirdly-designed, automated air freshener. I decide right then to start seeing a therapist. Life has been better since.