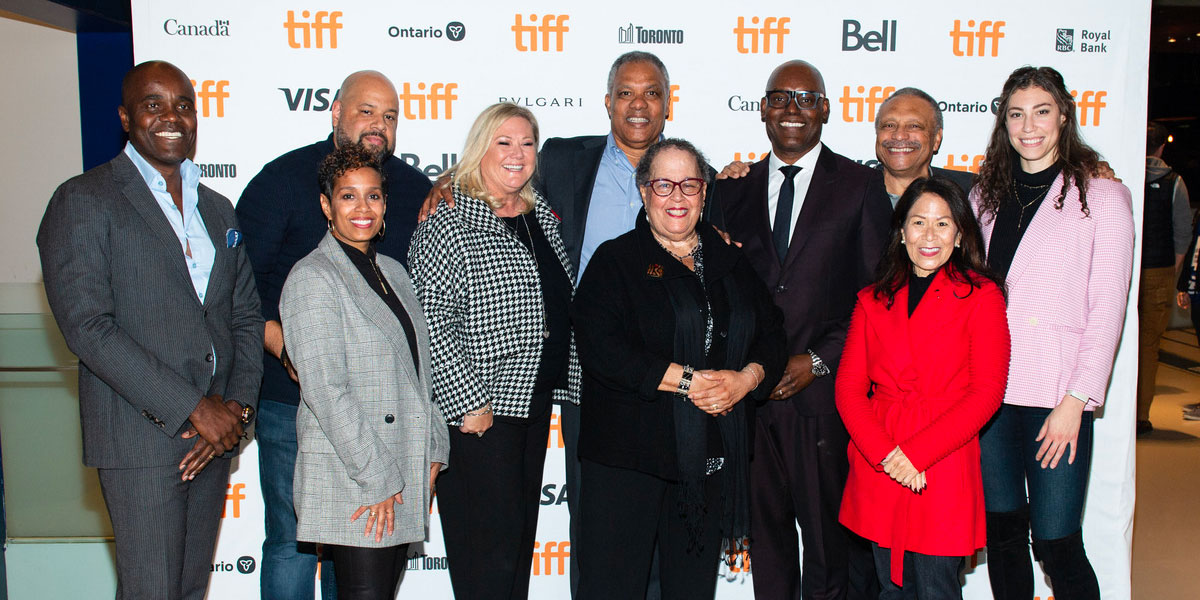 The official reveal of the cinema will take place in 2023, and in anticipation of the unveiling, TIFF marked Viola Desmond Day with the appointment of two front row seats, side by side in Cinema 1, dedicated to Viola and Wanda. These seats will remind all who enjoy the Festival and TIFF’s year-round programming of the courageous and revolutionary stand Viola took that day in 1946 at the Roseland Theatre in New Glasgow, Nova Scotia, and the dedicated efforts Wanda led over many years to share her sister’s story.

In addition to the renaming of Cinema 1 and as part of TIFF’s Every Story fund, Bailey also announced TIFF would further honour Viola and Wanda’s legacy by pledging to raise $2 million over five years to showcase and support Black women creators, enhance programming developed in collaboration with community partners for Black audiences, and to continue amplifying Viola and Wanda’s stories. This multi-year fundraising campaign was kicked off with a founding gift from TIFF Board member, philanthropist, and community leader Donette Chin-Loy Chang, and marks a renewed commitment from TIFF to champion storytelling by Black women creators, both year-round and at the Festival, to honour Black stories, and to recognize the importance of representation for and by its audience members.

"I can never forget that Viola Desmond's act of resistance to racism in Canada took place in a movie theatre," said Bailey. "By launching the Viola Desmond campaign through our Every Story Fund, TIFF will work with donors and community partners to make our own theatres more inclusive and welcoming, and to increase our support for Black women screen creators. I believe the communion that happens in a movie theatre belongs to everyone. This initiative is our way of growing that connection as we honour the legacy of Desmond and her sister Wanda Robson, who worked for years to bring Desmond's story to us all."

The artist activations will remain open to the public and free of charge in the TIFF Bell Lightbox Atrium until November 27 during regular box office hours, Tuesday 3pm–10pm, Wednesday through Sunday 10am–10pm. BAND presents artwork by Black emerging artists whose practices engage themes of immigration, identity, and community. Vintage Black Canada presents a photo activation that spotlights the everyday stories, sacrifices, and hopes of Black families. Rooted in creativity and togetherness, both projects celebrate Black life in Canada and the stories of vulnerability and strength that make up our communities. Additional information on the Black Artists’ Networks in Dialogue (BAND) and Vintage Black Canada exhibition is available at Viola Desmond Day: Art Activations by Black Artists' Networks in Dialogue (BAND) and Vintage Black Canada.

History of Viola Desmond and Wanda Robson’s impact On this day in 1946, while on a business trip and waiting for her car to be fixed nearby, Viola Desmond, a successful entrepreneur from Halifax, decided to watch a film at the Roseland Theatre in New Glasgow, Nova Scotia. Desmond, who had eyesight issues, took a floor seat in order to be closer to the screen. At that time, racist practices were often undertaken by businesses, and it was common understanding among the theatre’s staff that Black patrons were sold tickets to the balcony, and white patrons were sold tickets on the floor. When asked to leave her seat, Desmond refused. She was arrested, jailed overnight, and convicted of an obscure tax offence, masking the racism behind the theatre’s policy. Despite her own tremendous efforts and those of Nova Scotia’s Black community to assist in her conviction appeal, Desmond was unable to remove the charge against her, and she went unpardoned in her lifetime. She passed away only 19 years later, her bravery and the importance of her protest at the Roseland Theatre unacknowledged and underappreciated. Wanda Robson, Desmond’s youngest sister and an activist in her own right, began to tell her sister’s story in the 2000s. On April 15, 2010, Viola Desmond was granted a free pardon by the government of Nova Scotia, along with a public declaration and apology recognizing that her conviction was a miscarriage of justice and that the charges should never have been laid. In 2018, Desmond’s legacy was commemorated on the $10 bill.
content_copy Copy text of this article file_download Download PDF

Every Story is supported by fund Founding Partner, NBCUniversal