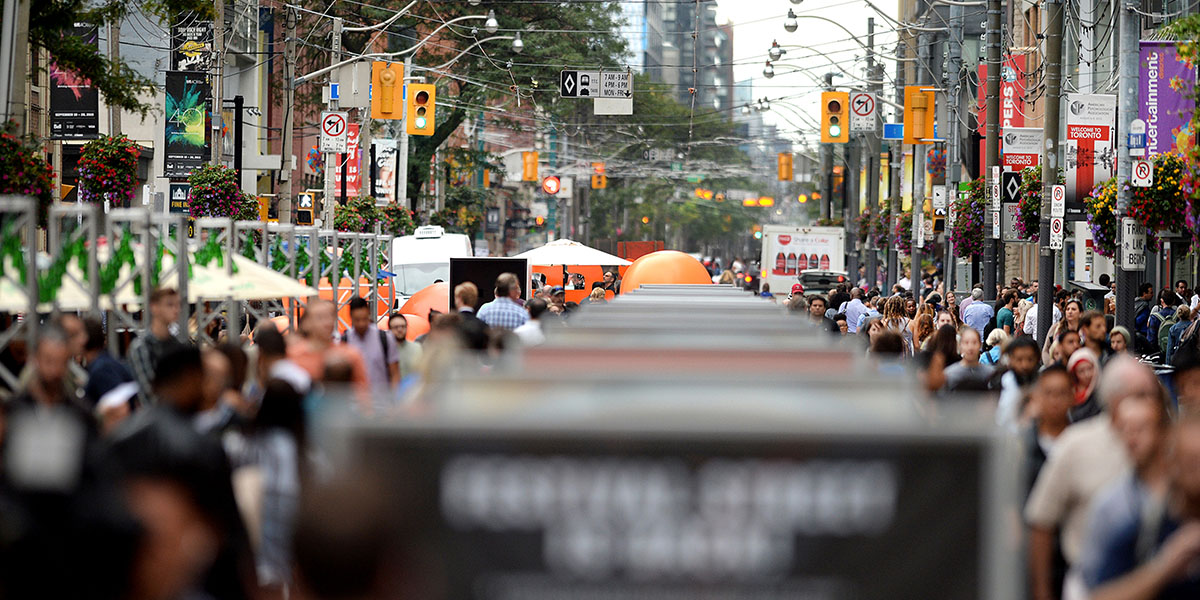 TORONTO — Back for its seventh year, the excitement and fun of the Toronto International Film Festival pours out from the theatres onto Festival Street and over to David Pecaut Square. King Street West between Peter Street and University Avenue will transform into the TIFF street party. Festival Street celebrations take place September 8–11, and activities in David Pecaut Square take place September 8–18. TIFF is also delighted to announce this year’s selection for the Cinematheque programme, featuring five films.

“The excitement of the Festival is something we want to share with the entire city,” said Cameron Bailey, TIFF, CEO. “Festival Street is where everyone can enjoy and experience the excitement of the Festival and its celebration of film. Family-friendly events, great musical performances, and movies in the park — all for free — are just some highlights you can expect, and we invite everyone to join us.”

MORE MOVIES AND MUSIC FOR FREE

The beating heart of Festival Street is the people of Toronto. There is something for everyone to participate in, from performances to open-air screenings at OLG Cinema Park in David Pecaut Square.

Kicking off on September 8 bright and early and running throughout the day, the public is invited to witness art being made, as StreetARToronto will be creating a live art walk generously supported by The Micki Moore Foundation.

Audiences won’t want to miss the Festival Street Kick Off event on the Slaight Music Stage. Back better than ever for its sixth year, the kick-off event will be hosted by Kardinal Offishall with special guests and musical performances to get the party started even before the films get rolling. Beginning at 7pm on September 8, join Cameron Bailey, Buffy Sainte-Marie, and special guests as TIFF welcomes the world back to Toronto to kick off the festivities.

TIFF’s new open air cinema, OLG Cinema Park located in David Pecaut Square, will feature the following fan favourites showcasing stars in TIFF 2022 Official Selections films: The Greatest Showman, UHF, West Side Story (2021), The Mummy, a 30th-anniversary screening of A League of Their Own (1992), plus School of Rock and Love & Basketball, both presented by the Next Wave Committee. Visitors are also welcome to grab a drink at one of the extended patios, sample delicious treats from an array of food trucks, and have fun with the many engaging partner activations. In 2019, Festival Street saw 200,000 visitors in four days and was a driving force behind increased revenue for local businesses.

While at OLG Cinema Park and the Slaight Music Stage, visitors can check out TIFF’s Every Story tiptap displays and support TIFF’s efforts to promote diversity, equity, inclusion, and belonging in film.

For the first time on Festival Street, TIFF will be hosting its community partner festivals and supporting these partners by providing booths on Festival Street so they can promote their programming and initiatives. Joining TIFF on the street are Inside Out, imagineNATIVE, and REEL CANADA.

Torontonians and the City of Toronto are an integral part of TIFF and the Festival. Quite simply, Festival Street would not exist without their tremendous support. To say thank you to the city and the people who call it home, TIFF has once again partnered with the TTC to give Torontonians more access to Festival films. On Saturday September 17, members of the public are invited to Roy Thomson Hall for the TTC Free Screening of a Festival title. More details will be announced closer to the date.

Bell ― Celebrating the best audience in film: Bell is celebrating the best audience in film with great experiences and access during Opening Weekend. Get the star treatment and show off your best angles with the Bell 360o Cam, or test your TIFF movie knowledge at the Crave Movie Trivia Booth for a chance to win great prizes. Speaking of stars, TIFF fans can see them up close and snap selfies all Festival long from the Bell Red Carpet Viewing Deck in David Pecaut Square.

RBC® Red Carpet Gallery: Whether it’s your love of films or your adoration of celebrities, nothing beats being at the heart of the celebration of cinema. As a super-fan, long-time supporter, and Official Sponsor of the Toronto International Film Festival®, RBC is thrilled to bring you this year’s Red Carpet Gallery viewing stands on the Roy Thomson Hall Red Carpet. With an elevated view and comfy seating, this will be an experience you won’t forget.

The Nespresso Café: At the heart of TIFF, the Nespresso Café aims to delight Festival-goers with a roster of fantastic coffees and products. Since we all know that a Nespresso moment is a quality moment meant to be savoured, Festival-goers will also be invited to spend time on the Nespresso rooftop terrace. A unique space where art and life come together, the rooftop offers a place to enjoy your coffee, share a few stories, and watch the stars swagger down the red carpet. The Nespresso Café offers all this and so much more. Join us at TIFF for the full experience!

Kim Crawford ― Make the Moment: Make the Moment at Kim Crawford’s Glitz and Glam booth where you can try a free sample of one of Crawford’s top-selling wines. Along with this, you will have a chance to relax at our lounge, touch up at our beauty stations, and go to our second deck to receive your personal glam cam experience that you can share on social media!

Air France ― La Bulle de Cinéma: Air France presents “La Bulle de Cinéma” ― a place for Festival-goers to rest and relax from the screenings and Festival parties. After experiencing a director-style photo op against the plant wall, our visitors are invited to indulge in a movie-inspired beverage accompanied by a sweet treat. Once inside, guests will recharge and enjoy a cultural experience all about cinema. With culture being as impactful through the screen as through travelling, Air France will offer film trivia for a chance to win top prizes such as cinema and Festival passes, as well as a pair of tickets to Europe to fly to the cultural destination of their choice. After experiencing a moment of discovery and relaxation in a shaded garden oasis, guests will leave with great memories and be ready for more TIFF festivities!

TikTok’s Unapology Booth: This summer, TikTok is unapologetically celebrating Canadian creation from coast to coast. Drop by our unapologetic mobile studio to share your story with the community!

Bombay Sapphire presents ImaGIN: Beyond The Glass: Bringing together art and friends, “ImaGIN: Beyond the Glass” activates your senses through an immersive and intimate cocktail tasting experience. Bombay Sapphire is touring a custom-built theatre across Canada to inspire new and existing creative drinkers to Stir Your Senses. Guests will experience the bright, balanced, and fresh taste of Bombay while we bring a canvas to life on your table.

Street Style Portraits by The Bay: The Bay is celebrating the street style of Festival-goers. Strut and pose in The Bay’s unique and immersive photo studio, where photographers are ready to make you feel like the star that you are. You will also take away a digital capture of your A-List moment.

The Be Unstoppable Film Project: UPS believes all voices should be heard and will be at TIFF to promote the Be Unstoppable Film Project. UPS has partnered with The Black List to help two emerging filmmakers tell their stories by awarding them $100,000 in production grants. Together we’ll provide the resources, time, and expertise necessary to work with the underrepresented and diverse talent, crew, and small businesses behind the scripts to direct and make a short film that will be submitted to TIFF in 2023.

Across Festival Street from September 8–11, there will be a variety of food trucks for all to enjoy. Alijandro’s Kitchen will offer a variety of Medi-Mexi fusion food, putting a spin on traditional Mexican and Mediterranean dishes. Rick’s Good Eats will be bringing their handmade, fresh ingredients and bold flavours to Festival Street with their homestyle Punjabi Canadian cuisine with a fusion twist. Get Your Own Taters will be frying up tater tots to a perfect crisp with fresh and unique handcrafted toppings and signature sauces. The Arepa Republic specializes in Venezuelan arepas, so you can indulge in the best Venezuelan flavours that will surprise you bite by bite.

TIFF Cinematheque is proud to bring five classic films to TIFF 2022 audiences, including many 4K restorations. TIFF Cinematheque screenings are free of charge for all audiences. For more information on schedules and screening venues, please visit tiff.net.

“We’re excited to relaunch the Festival Cinematheque programme after two years,” said Robyn Citizen, Director Festival Programming and Cinematheque. “This curated lineup includes beautiful 4K restorations as well as a classic title long out of circulation from our Closing Night filmmaker Mary Harron. Audiences will find I Shot Andy Warhol as fresh and irreverent as they did in its initial release.”

The 1988 cult classic and first feature film by Guy Maddin was remastered to digital 4K from the original film negative and includes a long-lost scene. Produced by Sphinx Productions in association with TIFF and with the generous support of Telefilm Canada, Tales from the Gimli Hospital Redux is a foundational work of prairie surrealism and, in the director’s words, “a picture inspired by the need to wake all my dead Icelandic loved ones with slaps to their cadaverous faces.”

This restoration was made possible through Canadian Cinema ― Reignited, a Telefilm Canada initiative announced in 2021 alongside partner film organizations. The initiative was developed to reinforce the importance of Canadian films in cinemas, festivals, and on digital platforms, and to support the curation, digitization, and preservation of influential Canadian feature films.
content_copy Copy text of this article file_download Download PDF

Thank you to The Slaight Family Foundation for their generous support of the Slaight Music Stage.

Thank you to The Micki Moore Foundation for their generous support of live art activations on Festival Street.

Thank you to OLG for their generous support of the OLG Cinema Park.

Thank you to Anne-Marie Canning for her generous support of the film programming at OLG Cinema Park.