Women in the Films of Abbas Kiarostami

Look at the recent films of Iranian filmmaker Abbas Kiarostami, and you’ll find many prominent women characters. Shirin is an experimental exercise in which we watch women (mostly Iranian actresses) watch a film — a classic Persian love story that we can only hear off-screen. Filmmaker Mani Akbari plays one of several characters in Ten whose personal struggles, shared freely in the private space of a car, depict a contemporary cross-section of what it’s like to be an Iranian woman. Kiarostami’s films made outside of Iran focus on non-Islamic heterosexual relationships: Certified Copy shows the very different stages of a relationship, presented paradoxically within the same afternoon that supposes James Miller (William Shimell) and his lover (Juliette Binoche) have just had a meet-cute, and/​or are embittered ex-life partners. Like Someone in Love illustrates the many forms of love one can find via an old professor who seeks tender companionship from a troubled young prostitute, Akiko (Rin Takanashi). But the film is more uncanny in its sympathetic depiction of Akiko, whose relationships with her suave pimp and territorial fiance present a disturbing picture of gendered dependence. 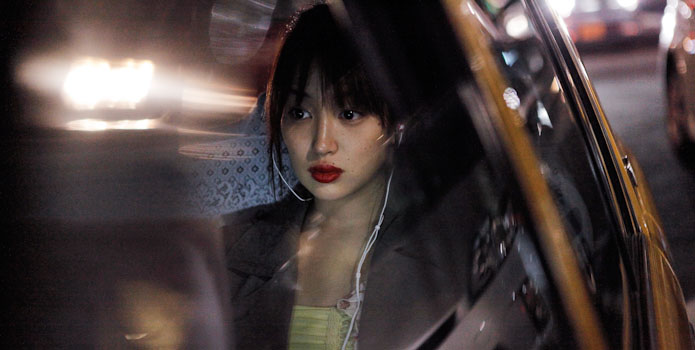 If you look further back in Kiarostami’s oeuvre, however, you’ll find a stark contrast, and at times, virtually no women. Kiarostami's earliest films were funded primarily by a government organization called the Institute for the Intellectual Development of Children and Young Adults, also known as Kanoon. As a result, many of them, like Where is the Friend’s Home? and The Wedding Suit, are child-centred with young male protagonists, frequently stubborn and tenacious boys whose simple, childhood problems become spiritual journeys. Women in these films are few and far between; when they do appear, they’re almost forgettable, like the sanctimonious maternal figures in Friend’s Home, or the unseen girl Mamad crushes on in The Experience. The nagging wife in The Report, which Kiarostami made independently, is kept in the film’s background, playing neither antagonist or protagonist.

And so, as Iranian cinema scholar Negar Mottahedeh asked in a 2004 essay of the same title: “Where are Kiarostami’s women?” The essay appeared in Subtitles: On the Foreignness of Film, and noted the gender difference between Kiarostami’s post-2000s films like Ten and his earlier work. It’s not an accusatory question, really; as Mottahedeh points out, Kiarostami’s representation of women in his films is strongly correlated to the censorship rules of the Islamic Republic. After the 1979 revolution, filmmakers grappled with the depiction of women to avoid getting into trouble. One rule was clear from the beginning: female characters had to wear the veil. It didn’t matter if they were at home, on the street, or travelling abroad. This was an unrealistic depiction, of course, because many women in Iran take off their chador or hijab upon entering private spaces.

Kiarostami referred to this specific censorship when asked why he had so few female characters. But it’s more a convenient excuse than a concrete limitation. The fact is, Kiarostami was making films centred around young men for years before the Islamic Revolution. When Ten came out, Kiarostami changed his tune: “I think I’ve come very late to this exploration of women’s issues… Leaving women out of my films was not a very intelligent decision. I made this discovery rather late, but there it is, I have made it.” 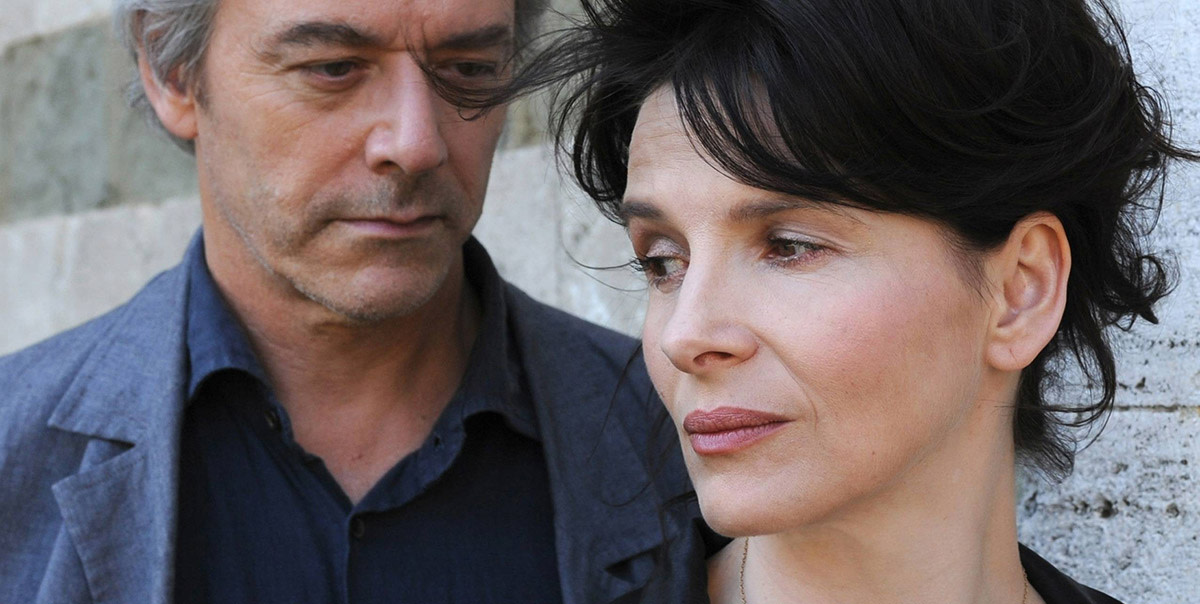 When we talk about Kiarostami, we frequently focus on his aesthetic innovations: the self-reflexivity, philosophical undertones, and de-stabilizing visual and temporal techniques, which force the viewer to observe other aspects of the frame. It becomes easy to overlook Kiarostami’s personal connection to his work, but in his five-decade-spanning career, he has shown not only a creative maturation, but a personal one. Kiarostami’s young protagonists are essentially a version of himself, so it’s no wonder they’re male. The Traveler’s Ghasem (Hassan Darabi), who cheats his classmates into paying him for portraits that he’s secretly pretending to take with a camera without film stock, is a fictionalized Kiarostami of sorts. As a film director, Kiarostami also sees himself as a charlatan, because of the liberties granted to him as a director, which gives him unwarranted powers to tell stories about those less privileged. 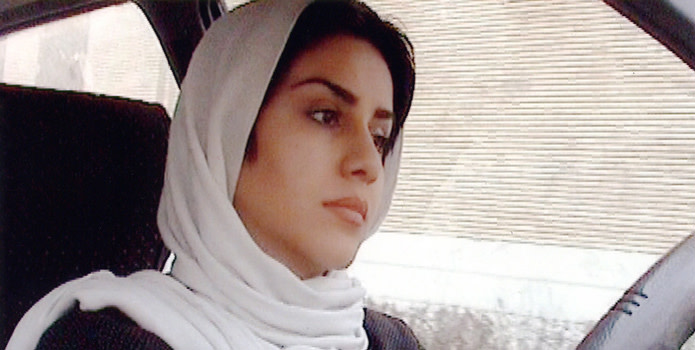 This is most apparent in the films he made in the middle of his career, village films like Taste of Cherry, Life, and Nothing More, Through the Olive Trees and The Wind Will Carry Us. Here, the Kiarostami ur-boy has grown up into a city-bred man, unaware of his own arrogance when interacting with the comparatively down-to-earth villagers. In Wind, protagonist Behzad is a journalist assigned to document the rural funeral traditions of a village where a very old lady is about to die. Her near-imminent death is not imminent enough for the impatient and bored Behzad, which creates a morbidly funny depiction of his solipsism. Many of these protagonists resemble Kiarostami — either physically and/​or literally (when they are also filmmakers) — providing Kiarostami a rich, self-reflexive exploration into the filmmaking process itself and his relationship to his subjects. 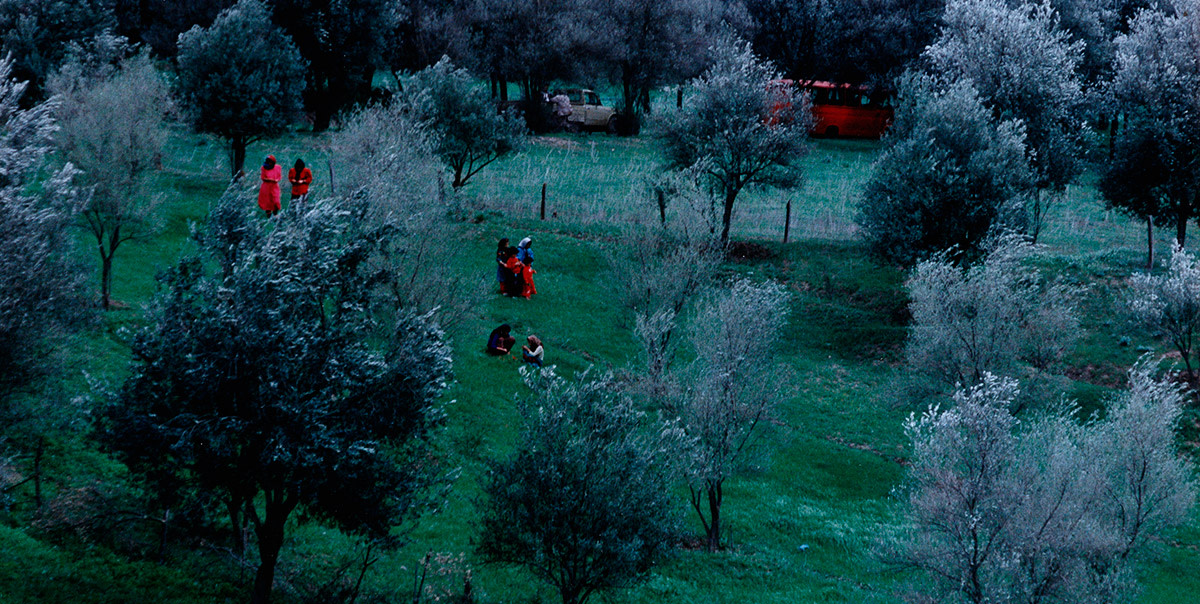 Through the Olive Trees

While it’s easy to see Kiarostami’s earlier ur-boy films as personal explorations that allowed him to grow his craft through characters that resembled himself (i.e. by being male), his post-revolutionary films didn’t exactly ignore the existence of women. Through the Olive Trees and The Wind Will Carry Us, for example, offer intricate interpretations of the Islamic Republic’s rules. “The veiled woman unframes the realist frame,” Mottahedeh argues. This limitation forced Iranian filmmakers like Kiarostami to escape to the village to shoot films, she explains, where, freed from the expectation of offering a realistic portrayal of Iran, they could create more fabulist stories and female characters aligned with symbols of nature and desexualized from typical heterosexual encounters and exchanges — thereby presenting the modest representation of women expected by the government.

Women villagers like Tahereh in Olive Trees and Zeynab, the cow-milker in Wind, are presented incompletely to viewer and male characters alike, and they match the films’ lack of narrative closure. When will the old woman in Wind finally die? Olive Trees offers a love story left ambiguously open: does the reticent Tahereh finally say yes to Hossein at the end of the film? For Kiarostami, the answer is less interesting than creating a purposely frustrating visual that matches the frustration an Iranian filmmaker must feel when writing a love story. In the final shot, Hossein runs toward Tahereh and away from the camera; the two characters become but mere specks in the vast rural landscape. Who knows what they’re saying to each other? If they’re touching each other? If she’s being modest?

Like so many of the small mysteries that Kiarostami has quietly inserted into his work — from long static takes that deny us a character’s POV, to narrative digressions that make up an entire film, to unknowable characters both male and female — he forces us to imagine our way through his films. This, an initially frustrating exercise, quickly becomes rewarding, once we realize the power and respect Kiarostami has given us, as we are given enough time to soak up everything his stimulating cinema has to offer.