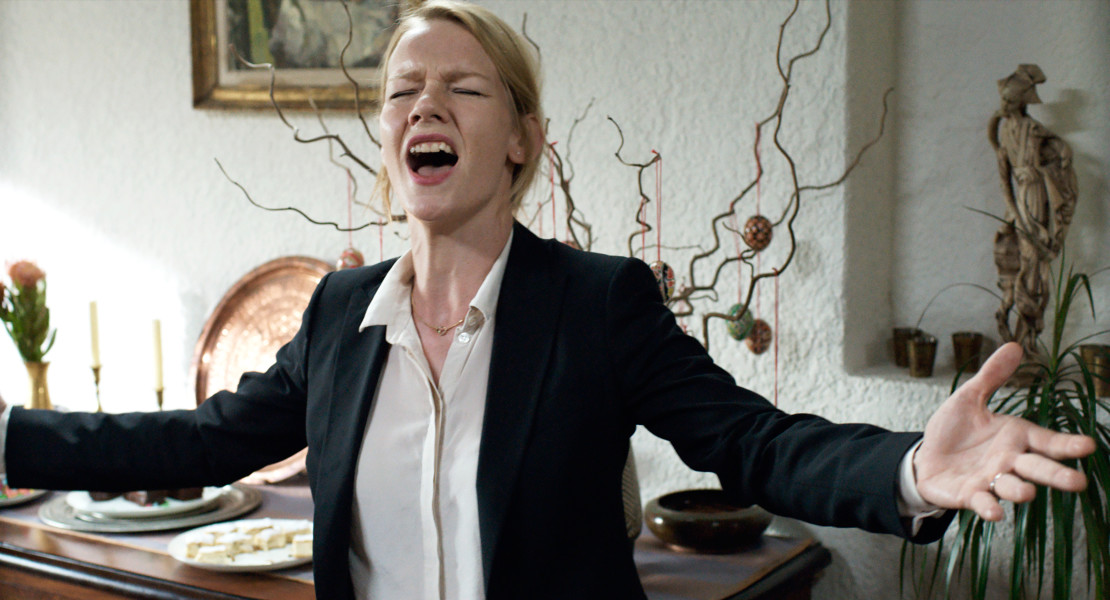 Toni Erdmann is a Film Where Parents Just Don’t Understand

It will also fill you with joy until you burst

A few years ago, my mom came to Montreal to stay with me and my roommate for a week. It was the hottest week of the summer; my apartment had no air conditioning. She immediately started cleaning to find the maggots in our pantry and the mould in our floorboards. Lavishly decorated cheese plates were prepared, then documented, hours were spent walking, sweating, complaining, worrying about the logistics of renting a Bixi bike, or what damning truths a Yelp review might reveal — the hopeless pursuit of having fun with a parent. She tagged along to a loft party and threw a beer bottle off a fire escape, almost killing someone. She had previously put that same ice-cold beer bottle on a performance artist’s neck and kept doing it, even when she was asked to stop, repeatedly. One night, as that summer’s seemingly ceaseless fireworks stormed overhead, I sat there as my mom cried on our fire escape, admitting, “I don’t deserve to be happy.” I cried too, as our relationship changed from confidants to conspirators, from hating each other’s guts and back again, to endless love. It was a long visit. A lot happened. The last day, we walked past Cirque du Soleil (again: Montreal), where a man with a thick Québécois accent uttered seven infamous words that would forever change how I saw my mother: “Would you like to try the trapeze?”

As it turns out, my mother did very much want to try the trapeze. I watched, aghast, as she climbed up the steep ladder, threw a harness over her Reitman’s tank top, and took flight, nearly catching the man on the other end, but instead fell onto the mesh netting below, her eyes closed, deliciously.

Toni Erdmann is a movie about that moment where a parent stops being a parent and a child stops being a child. Where instead, you’re just adults in the world. And how that’s the most terrifying thing because, hey, who the fuck thought that could ever happen? It’s also the best movie I’ve ever seen about the strains of a parent/child relationship and that same potential to deserve happiness. At one point, I was so deliriously gleeful from the experience of watching this film that I think I went temporarily insane. The idea of a completely new audience discovering this film gives me literal chills. All Toni Erdmann can do — it is German director Maren Ade’s modus operandi — is fill you with joy and pathos until you burst.

When we first meet the father in this story, Winfried (a grizzled Peter Simonishek), he’s being summoned to meet the FedEx delivery guy. Wearing ridiculous sunglasses and wielding a banana like a Marx brother, Winfried holds our courier's gaze for a beat and retrieves his package. Assures his friend, “He just got out of jail for mail bombs.” Seconds our hero: “I’m looking forward to defusing it.”

We soon realize that Winfried is the last of a dying breed: a practical joker. Constantly popping in his comical false teeth in and out like chicklets (he even has a special pocket reserved for his props!), he refuses to take life seriously, lest he get out alive. Which makes this retiree a social outcast, particularly in an early scene where he is reunited with his conservative, estranged daughter Ines (a wonderful Sandra Hüller) for a family birthday party.

Experiencing a life best lived in Club Monaco separates, Ines is a high-ranking consultant for a business management film in Bucharest. She spends her birthday on the phone, fielding stressful business calls. As her father, clad in violently painted KISS makeup (it makes sense, narratively) watches her from across the room, there’s a chilling distance between them that reminded me of Ebeneezer Scrooge in A Christmas Carol. A parent observing a child he could’ve changed, the ghost of things to come. For Ines, the mental math that it takes to cut a parent completely out of your life has been completed. And you figure, from that moment on, Toni Erdmann will do the mature thing and abandon at least one of these doomed protagonists.

Instead (shrewdly for the story, disastrously for the characters) the movie forges a far more difficult path as Winfried decides to surprise his daughter with an unexpected visit in Romania. When she tries to shove him off with excuses, he refuses to leave, the nightmare houseguest, tagging along to her business meetings and after-work functions. He relishes her embarrassment in telling tall tales, confiding in a high-profile client that Ines needs to impress that he’s considering “hiring a substitute daughter” who will “cut his toenails.” Her every downcast look is a million little deaths. Winfried is not made for Ines’ world of corporate name tags, casual work wear, and poolside mixers. Instead, his unwelcome presence in her life borders on a threat. 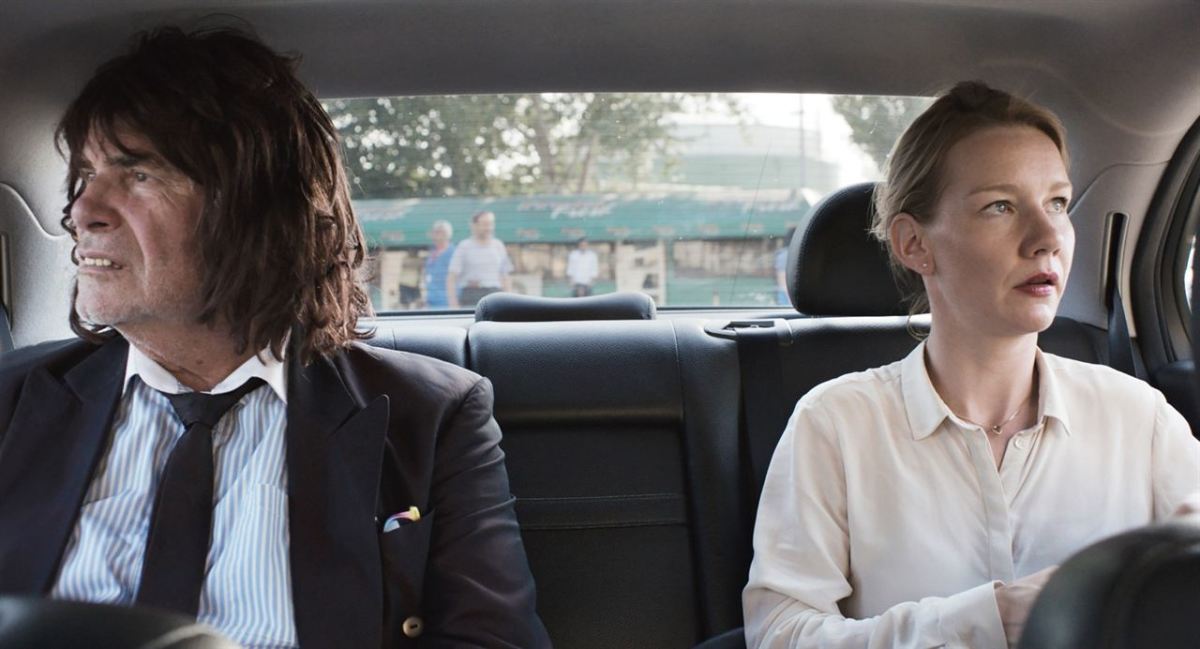 Originally appearing like a wet blanket, Ines is under a lot of pressure to always be closing. Hüller’s impressive performance constantly shifts between butt-clenched humiliation and deep, soulful introspection, particularly in a devastating scene at a trashy Bucharest nightclub where our father and daughter ingest cocaine. German director Maren Ade, who with Toni Edrmann has crafted the most humane comedy I’ve ever seen, refuses to let her female protagonist be a stereotype and unveils layer after layer of Ines’ moral turpitude. The quandary gnawing at her centre — how to efficiently execute a layoff of thousands of impoverished Romanian workers for her high-profile developer client — is both the foundation of her identity and the source of all her existential angst. (“The more people he fires, the less people I have to fire,” she says to her father about a poor worker at a dilapidated lot.) Ines is her job and she hates it. And so, she hates herself. Late at night, her father prods at the bruise, asking, “Are you really a human?” He then gives her a cheese grater as a birthday present.

The fact that Winfried then brings said cheese grater to the club and begins to use it in front of his daughter’s friends in a Carrot Top–esque display of prop comedy is perhaps his point. Humour — even when it’s not appropriate and especially when it’s embarassing — is his foundational way of being. It is not his daughter’s. And it doesn’t have to be, says Toni Erdmann. Just because a parent believes they know how their child should live their life doesn’t undermine their ability to ruin it completely. 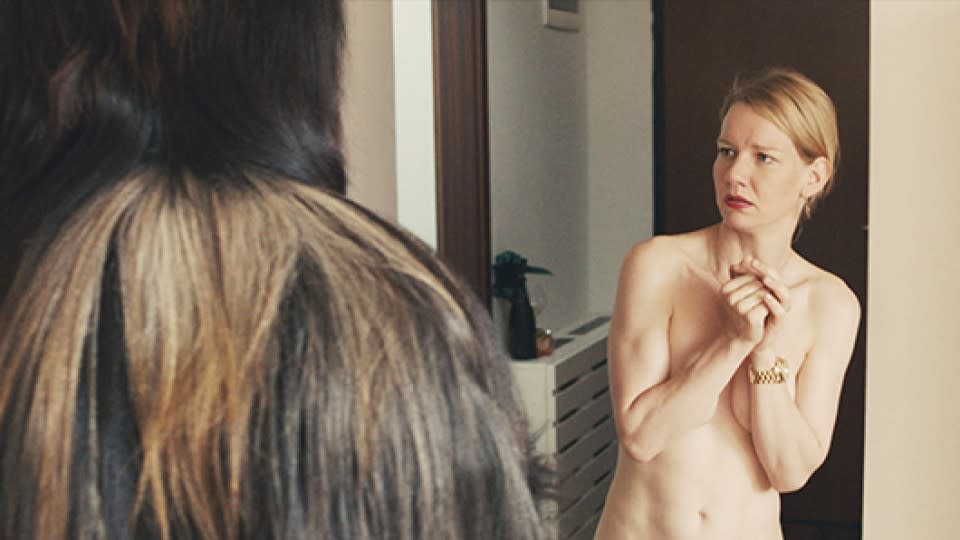 From this point on, Toni Erdmann’s narrative undergoes another dangerously insane development (truly too brilliant to spoil here; let’s just say it involves an alter-ego inspired by Tony Clifton) towards the land of false wigs and identities, fart cushions, a man ejaculating on a petit four, a scene in which father and daughter are forcibly handcuffed together, and many other truly memorable moments and comic set-pieces. (A naked brunch work function more awkward than any acclaimed BBC comedy, a staggeringly emotive performance of Whitney Houston’s “The Greatest Love of All,” a traditional folk costume that looks like a giant hair monster from Yo Gabba Gabba!.) Our characters may even learn to understand each other, as much as that is even possible. Just like real life, they grow but remain the same, a microscopic shift in the planetary movement of their identities.

Ultimately, Toni Erdmann offers that same unadulterated glimpse of humanity that I experienced that difficult week in Montreal with my mom. The idea that if you could really spend time with someone, especially a person you supposedly love, that you could begin to understand them. No one likes to see their mother on a trapeze. But everyone needs to let go sometime.